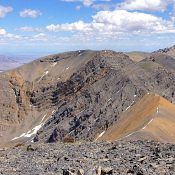 Climbing and access information for this peak is on Page 288 of the book. Updated November 2021

This peak is located southeast of Sunset Peak on the main Lost River Range Crest on a major northwest-southeast ridgeline at the south end of the Lost River Range. It has a magnificent, rugged west face and has only one feasible climbing route on its west side. That route is described in detail in this update. USGS Sunset Peak 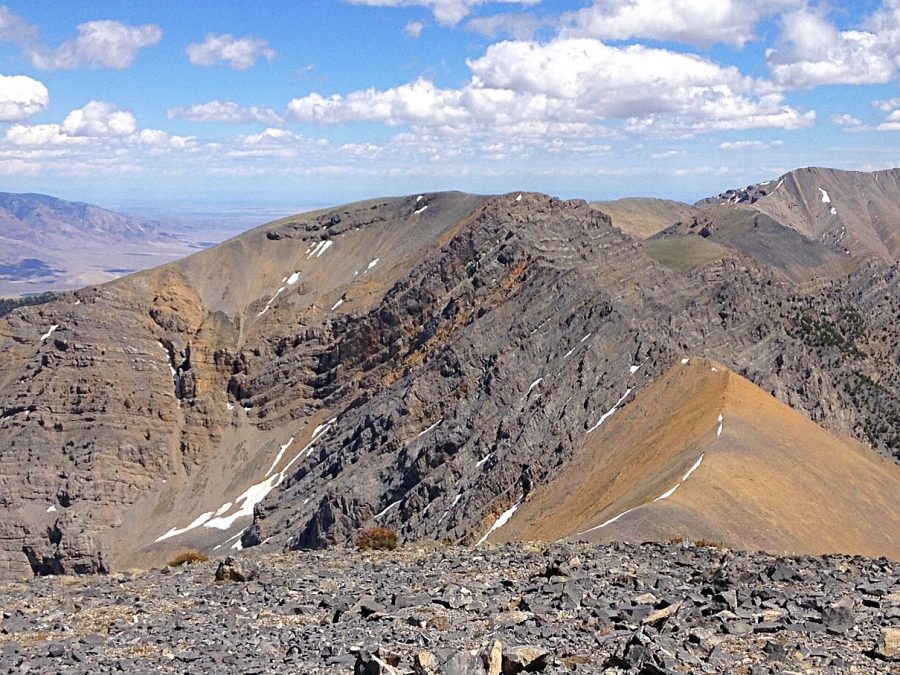 Pass Creek Road/CR-122 is located along US-93 south of Mackay and is signed as 3900W. This junction is exactly 7.4 miles south of Main Street in Mackay and 18.3 miles north of the junction of US-93 and US-20 in Arco. Turn north onto [signed] Pass Creek Road and drive 3.4 miles to a signed junction with FSR-273/Elbow Canyon Road. Turn right/east onto Elbow Canyon Road and reset your odometer. At 0.8 miles, go straight/east at an unsigned junction.

From the road junction, hike (or drive) about 1.5 miles up to a meadow at 7,580 feet. From this meadow, there are old 2-track jeep roads heading north, south, and east. None of them are shown on maps. Elbow Canyon Road continues east up the canyon as a 2-track road, which soon ends in the forest. A use trail continues after the road’s end, but only for a short distance. Bushwhack up the center of the canyon (side-hilling is a bad idea). The blowdown is a bit bothersome at first, but it soon thins out. Stay to the left/north with the steep cliffs as a guide. Do not wander off to the right/south up a side canyon.

Reach a large open area of scree on the left/north side of Elbow Canyon at 8,300 feet. It is the spillout from a prominent scree gully that is just “past the cliffs at 8,300 feet” as per Page 288 of the book. The book states: “Turn north and climb to Point 10441.” Does that mean to climb north up this scree gully? It certainly is the most direct way to reach Point 10441 and the USGS topo map makes it look doable. But, alas, it is NOT as I found out when I tried to descend it. More on that later. This open area of scree gives you a good visual of another obstacle to avoid: a massive rocky buttress to the right/east of the prominent scree gully (see photo).

Continue east up Elbow Canyon into the forest and just past the aforementioned rocky buttress. Leave Elbow Canyon and bushwhack left-ish/northeast up a side gully. As you move up this gully, the terrain opens up, contrary to what the USGS topo map shows. You can either stay in the gully and follow it northeast then north to reach a ridge saddle east-southeast of Point 10441 OR leave the gully and climb up the face to its left/west. I chose the latter since the terrain is a bit less steep there. Scramble north up the south face on steep, loose scree/gravel with scattered pines. This is a punishing climb and is the crux of today’s adventure. It is much more fun to descend it. Move left/west onto a forested rib (just above the rocky buttress) if necessary to gain some traction. However, that rib soon disappears higher up and a face climb is still required.

Continue grinding up the steep, loose south face. At tree line, the slope eases considerably and the remaining scramble to the ridge saddle is rather easy on stable talus/scree and broken rock. Once at the 9,740-foot ridge saddle (east-southeast of Point 10441), scramble west then northwest up a face to reach Point 10441. The terrain here is a somewhat steep mix of tundra and talus/scree. The final section is easy broken rock. From Point 10441, follow the weaving, rocky, narrow ridge crest northwest then north to Point 10300. Look for goat trails on or near the crest. Point 10300 is a gentle scree hump.

From Point 10300, descend north to a broad saddle of tundra and broken rock. From the saddle, head north then northwest up an easy slope of tundra and stable scree/gravel to reach the cairned summit of Sunrise Peak. The east summit is the official high point. It sits on a minor rocky rib/protrusion. But the west summit hump looks higher, so let’s check it out. The west summit sits at the top of the ridge that heads northwest to Sunset Peak. The exposure on the west side of this summit is fierce. The west summit hump measures five feet higher than the official/east summit but has no summit cairn. Sometimes the measured point is not quite the high point. Such is the case for Sunrise Peak. 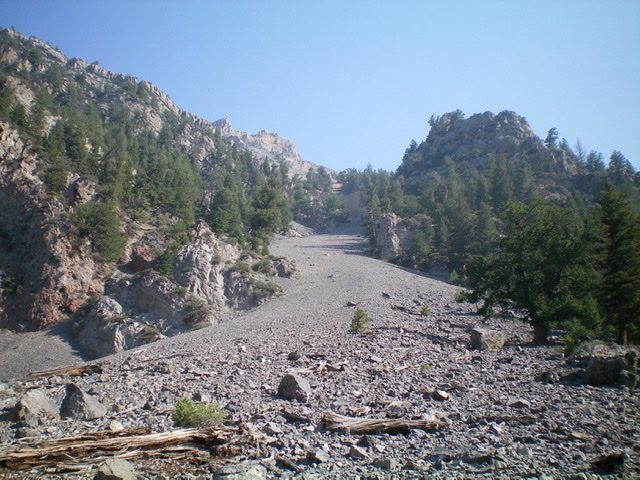 Looking north up the scree gully from its base. A 15-foot cliff band blocks progress at 9,200 feet. Livingston Douglas Photo 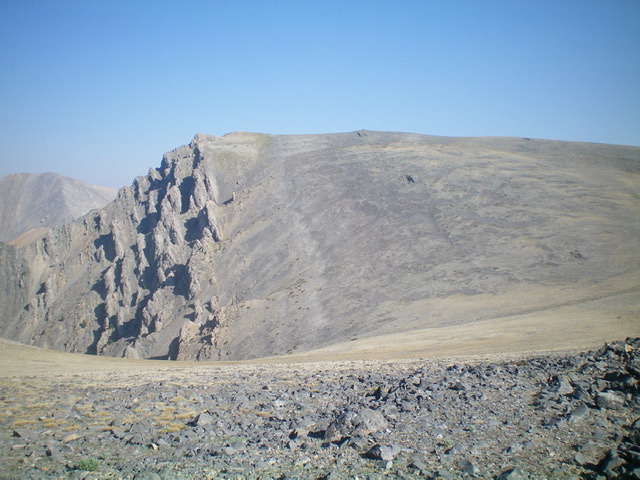 The final push to the summit, as viewed from Point 10300 on the south ridge. Livingston Douglas Photo 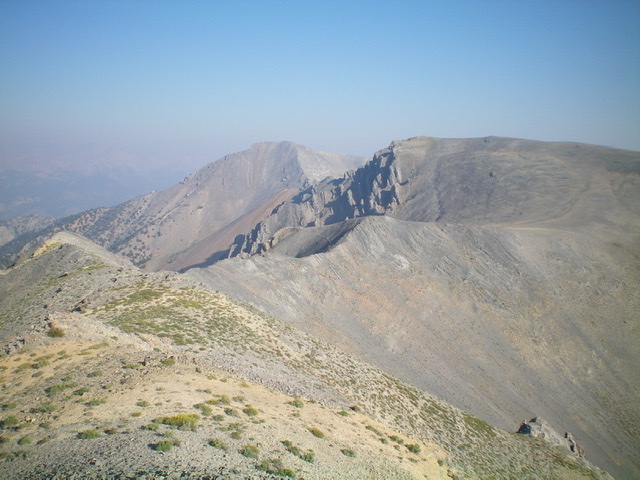 Sunrise Peak (right of center) and Sunset Peak (dead center in the distance) as viewed from Point 10441 on the south ridge. Livingston Douglas Photo 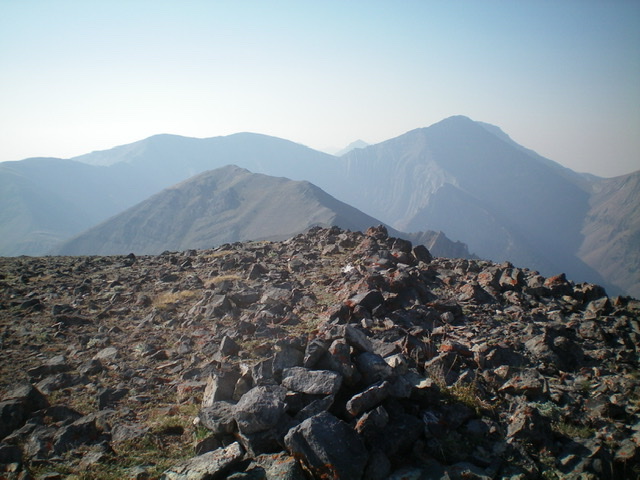 From the official/east summit of Sunrise Peak, return south then southeast along the narrow ridgeline to Point 10441. From Point 10441, descend the south ridge to about 10,000 feet then boot-ski southeast down a steep, wide slope of loose scree/gravel to reach the scree gully that leads down to the large scree fan at 8,300 feet in Elbow Canyon. As you approach 9,200 feet, you get that “Uh, oh!” feeling. The scree slope has narrowed and is about to bend right-ish/south and head down the steep scree gully. But it looks like there is a sheer cliff to block progress. Yes, there is a 15-foot sheer headwall below you. The south gully is a NO GO.

Backtrack a whopping 150 vertical feet uphill on steep, loose scree/gravel and then do a testy traverse across the dangerous scree/gravel (with the sheer headwall below you, just waiting for you to slip and fall down it) to reach forested, stable ground on the left/east side of the south gully. This traverse is the crux of the descent. You are now on the forested rib just above the rocky buttress that you saw (and skirted the right/east side of) on the ascent route. Descend the crest of the rib to about 9,100 feet then drop left/southeast off it to descend the south face on steep, loose scree/gravel with scattered pines to reach the gully on its left/east side lower down. Follow the gully back into the forest and quickly reach Elbow Canyon. Follow Elbow Canyon right/west back to the meadow at 7,580 feet and Elbow Canyon Road. 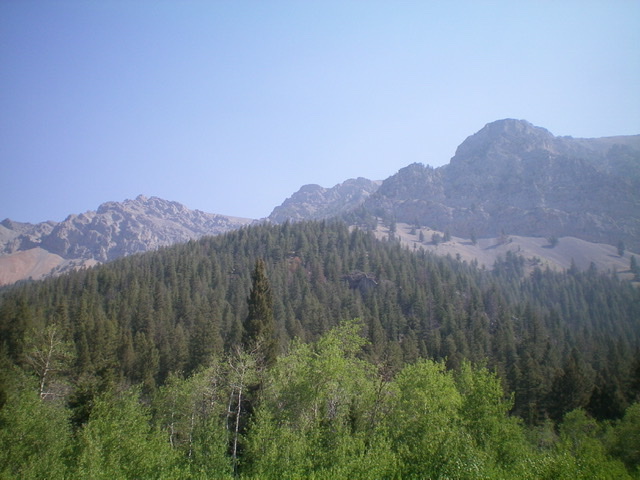 The west side of the south ridge of Sunrise Peak (right of center) is a mess of impossible cliff faces and buttresses. Livingston Douglas Photo 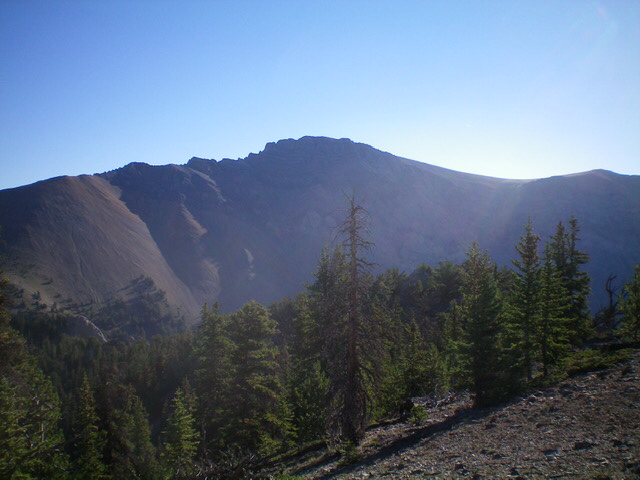 Sunrise Peak and its rugged west face as viewed from the southwest. Livingston Douglas Photo