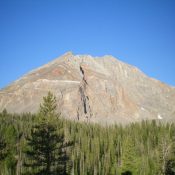 This update replaces the climbing and access information for this peak that is found on Pages 267-268 of the book. Updated November 2021 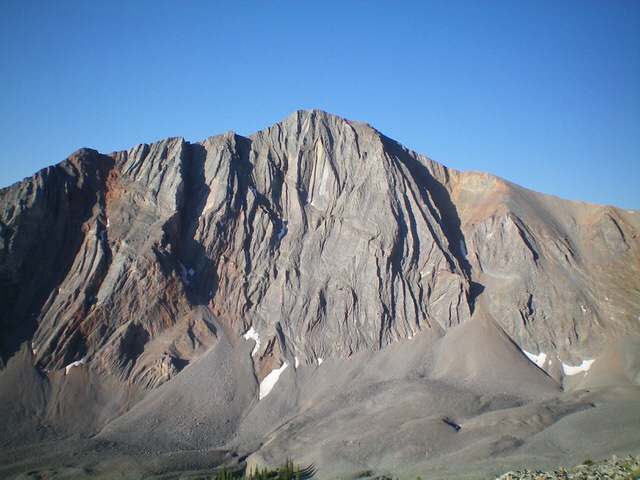 Same as for Metaxy Peak. This is the second leg of a 2-peak journey that includes Metaxy Peak (10,757 feet) and Pahsimeroi Pyramid. It covers 7.5 miles with 3,650 feet of elevation gain round trip. 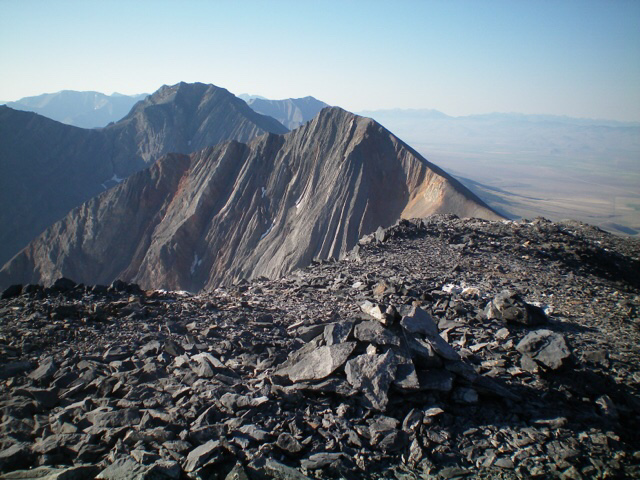 Pahsimeroi Pyramid as viewed from Metaxy Peak to its north. Petros Peak is left of center. Livingston Douglas Photo

From the 10,180-foot connecting ridge, scramble southeast up the ridge crest on steep-ish scree with occasional help from a goat trail. Stay on the ridge crest for the best footing. There are no rocky ridge outcrops to navigate. The summit is a small ridgeline high point with a modest cairn. 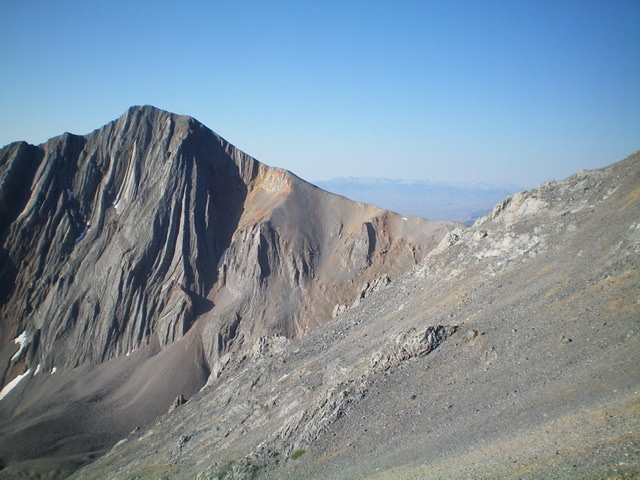 The northwest ridge of Pahsimeroi Pyramid (middle of photo). The summit is left of center. Livingston Douglas Photo 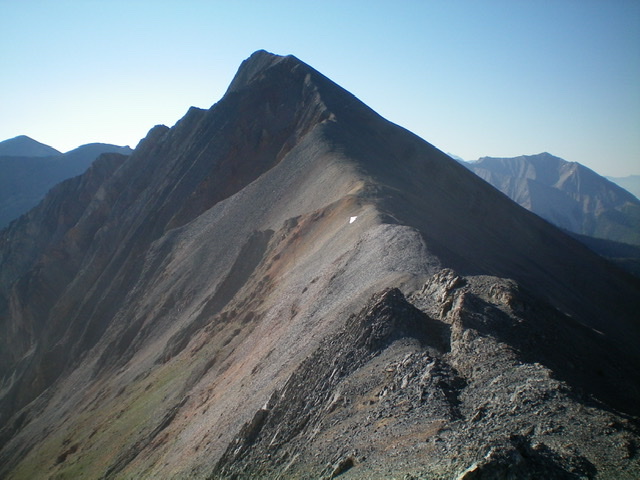 Looking up the northwest ridge from the connecting saddle. Livingston Douglas Photo

From the summit, descend east briefly on a shoulder to reach the head of the [obvious] southeast gully. Leave the shoulder and carefully descend steep, loose talus to reach the center of the gully. Follow the center of the gully on scree/gravel with the help of a goat trail. You can boot ski much of it. Lower down, the gully has a hidden headwall that requires the downclimb of two separate Class 3 chutes. Once at the base of the gully, there is a flat, grassy patch with pine forest nearby. This point is still over 400 vertical feet above the valley floor.

Descend a combination of cliff bands and pine forest (with some brush) to get down to the short grass (and a dried-up pond shown on the USGS topo map) on the valley floor. From the dried-up pond, hike northward along the base of the mountain cliffs to the right/east to reach the critical valley junction that separates Peak 10340 from Point 10676. Scramble northeast up a forested headwall then bushwhack left/north to reach the rounded shoulder and Point 8662. Follow the semi-open shoulder northeast to intercept the old 2-track road and follow it back to your parked vehicle. 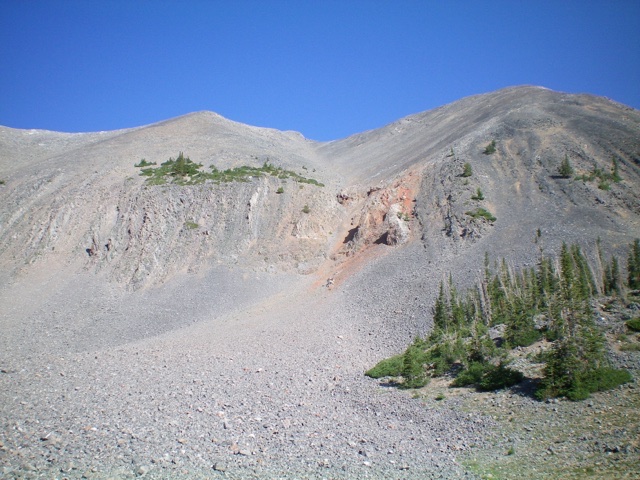 Looking up the southeast gully (dead center) from its base. The summit is left of center. The headwall goes at Class 3. Livingston Douglas Photo 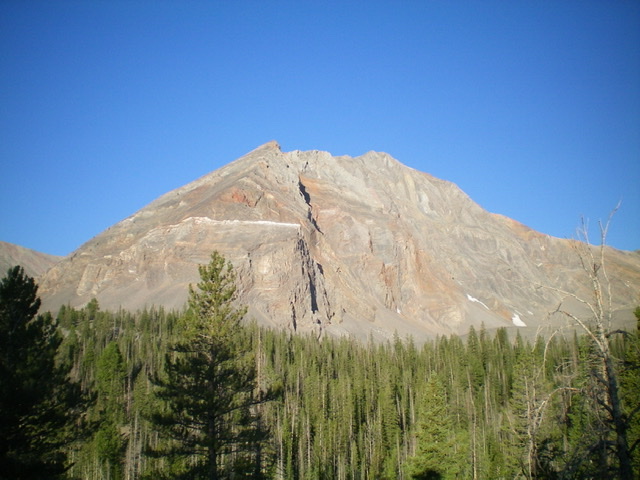 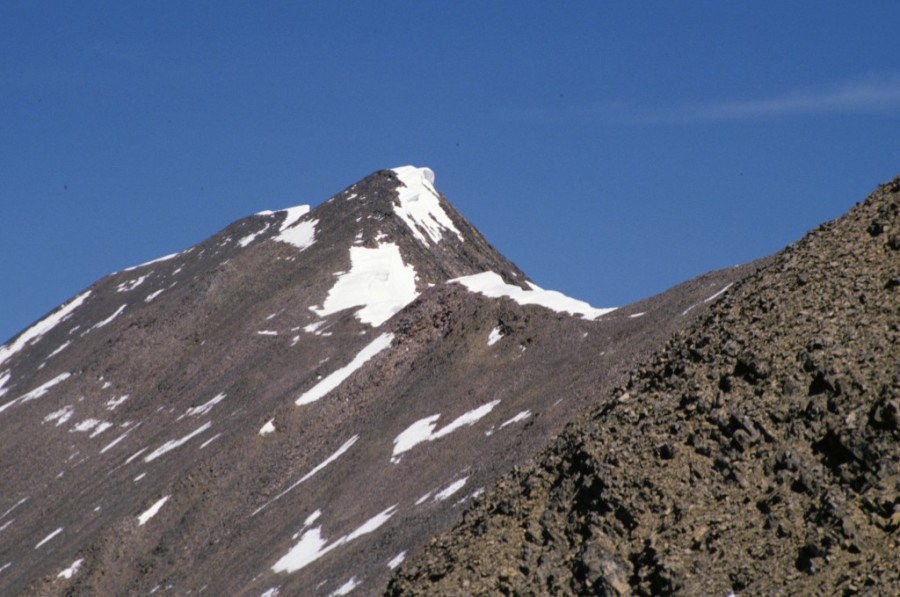 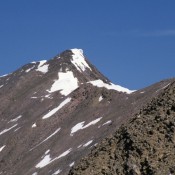