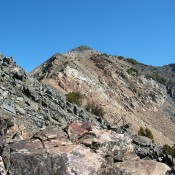 Climbing and access information for this peak is on Page 252 of the book. Livingston Douglas added two new routes, the West Shoulder/Southwest Ridge and North Ridge/West Face, along with photos from his 2022 ascent. Updated November 2022

This big peak sits just south-southwest of The Box and Johnstone Pass. Since the last edition of the book, I learned from people who own land in the area that Peak 10805 has often been called Iron Mountain due to its orange color. USGS Grays Peak 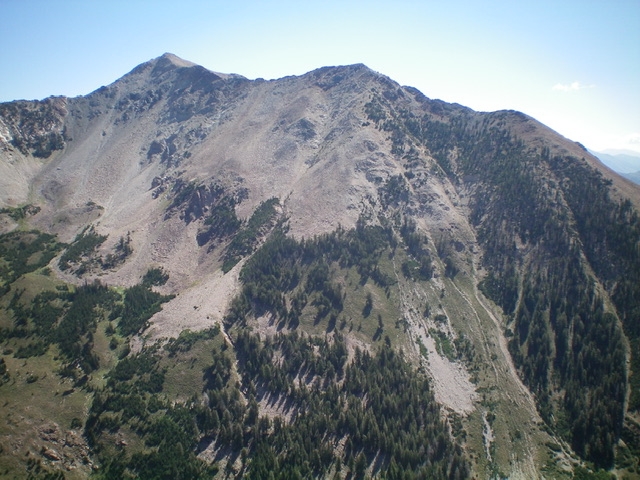 Iron Mountain as viewed from Jacqueline Peak to its west. Livingston Douglas Photo

Primary access is via FSR-118/East Fork Big Wood River Road [(B)(1) on Page 258]. Follow this road north to the signed trailhead for PK a pass. Be aware this road deteriorates after it passes Federal Gulch Campground. A 4WD is recommended.

I climbed it from PK Pass. It took about 1.5 hours from the pass. From the pass, head up and then move left just before reaching treeline. Once out of the trees, you will see a couple of rocky/cliffy gullies. Scramble to the left of them and head up to the first false summit. Pass it on the right about 20 feet from the top. The route drops to a saddle. Stay on the ridge for a while, eventually skirting the ridge on the right and the regaining it at the next false summit, which looks a lot like the true summit from the first false summit.

From this point, you look toward the true summit in dismay. The route is broken ridges and ribs and the ridge itself is blocked by a big dark cliff. On the ascent, I followed the knife-edged ridge for 100 yards or so, dropped off to the right, and then contoured over to the first rib. From this point, my route followed what looked to me to be the path of least resistance over, around, up and down the next few ridges. I finally started building cairns about halfway through when the route promised to be confusing for my return. The last portion of the climb is easy, across big blocks and talus. I found evidence of a prior ascent (a stick in a pile of rocks), but no summit register. Superb view from the top. Great Fall colors. Challenging but not difficult. 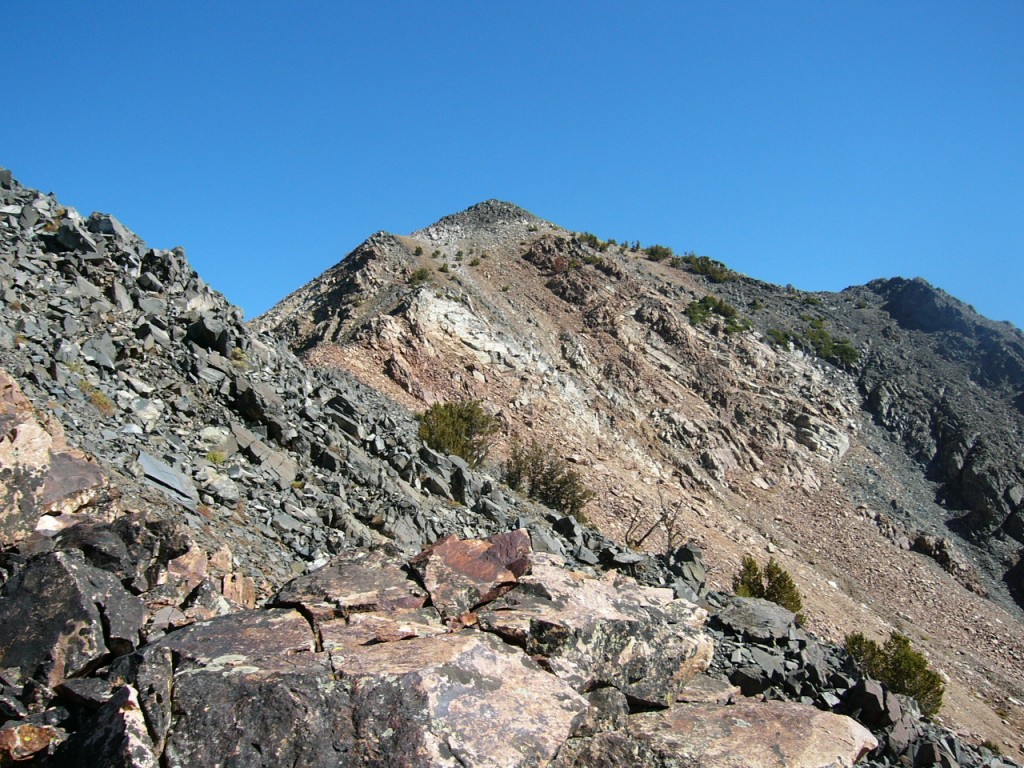 The final ridge leading to the summit 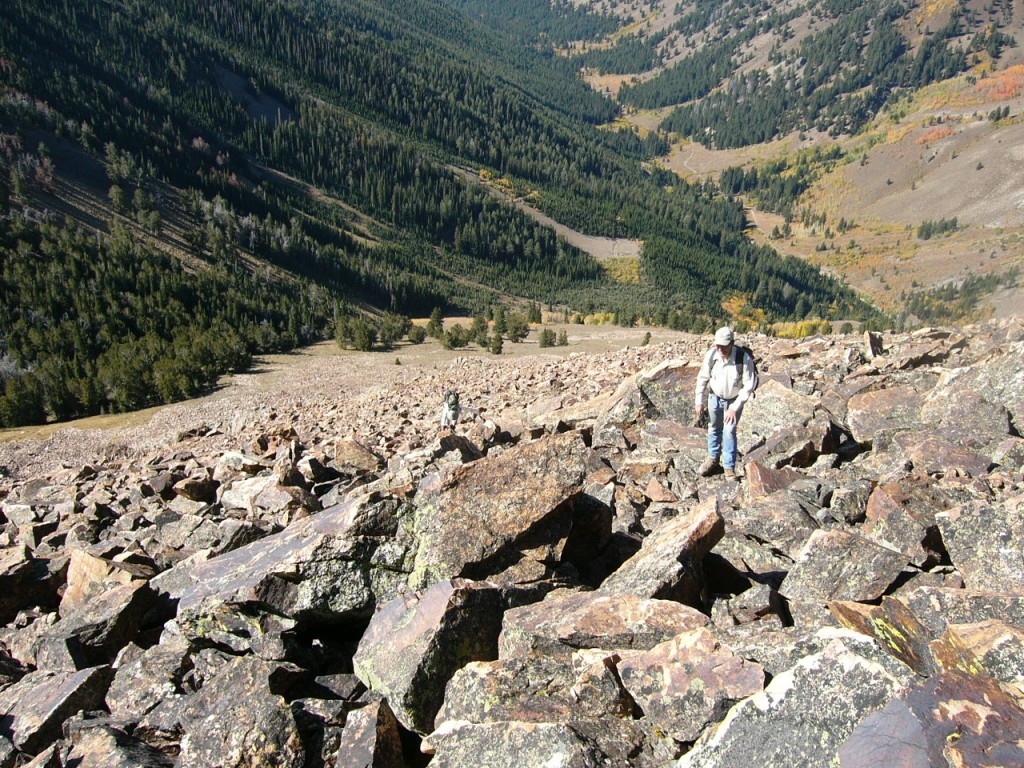 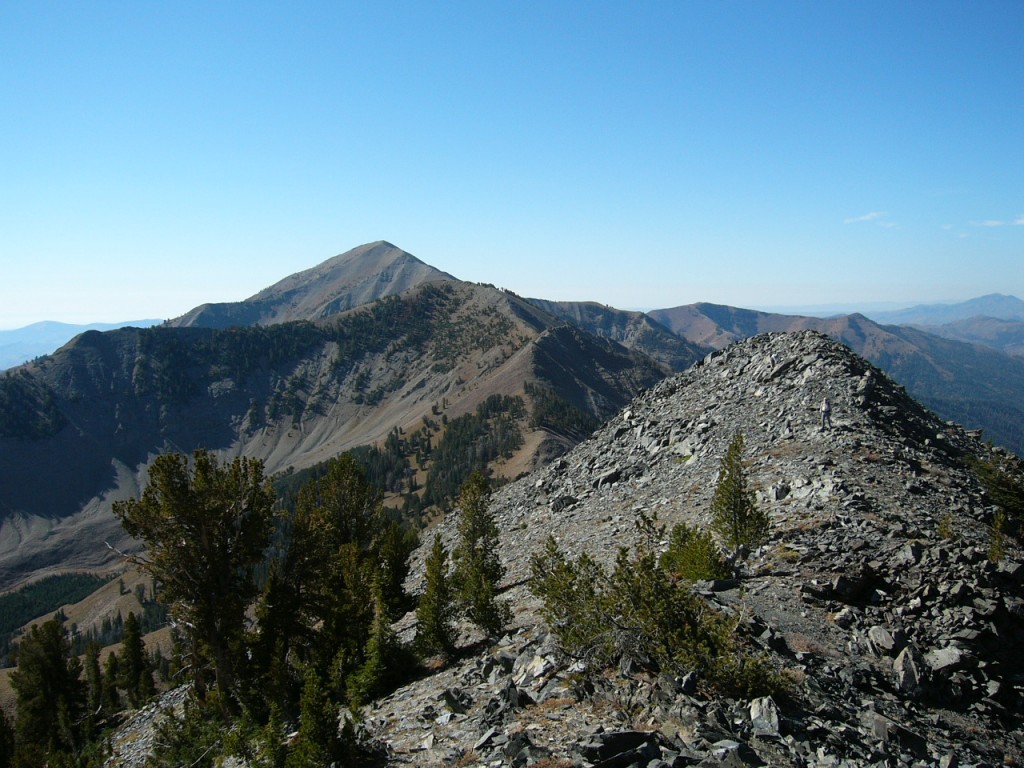 The ridge levels out at a step before heading up the final broken ridge to the summit. Grays Peak is in the background. 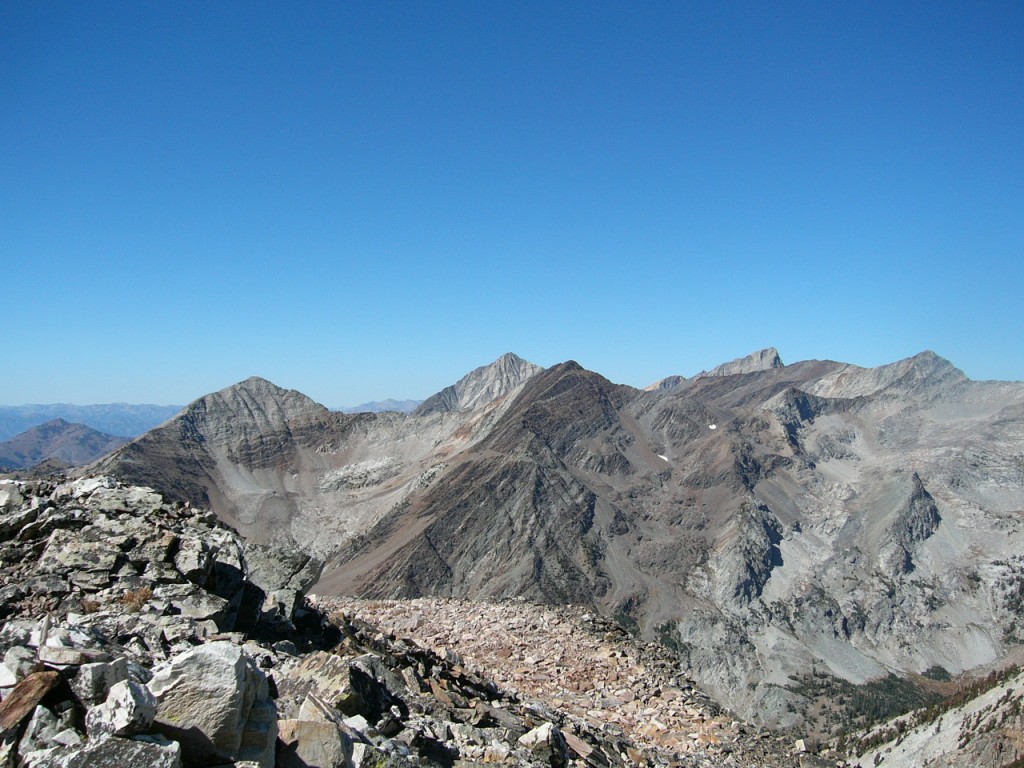 Johnstone Pass Trail/FST-175 [(B)(1)(a) on Pages 258-259]. Please note that the PK Pass Trail/FST-174 [(B)(1)(c) on Page 259] may or may not still exist. I saw no clear evidence of it along East Fork Road but there seemed to be an old trail marker of some sort along the road where the trail should be. This trail passes across posted private land, so be careful that it still exists before bushwhacking your way to PK Pass. Seeing no evidence of PK Pass Trail, I decided to explore a different route.

From the Johnstone Pass trailhead (8,100 feet), hike up the trail for about 0.2 miles to the first open area where the trail flattens out. The massive hulk of Iron Mountain is direct to the right/east from here. The terrain is almost entirely open and rocky. Leave the trail and bushwhack east across the East Fork Wood River (nothing but a trickle here since the river is flowing well underground at this point) through a gap in the willows, aiming diagonally left/northeast toward a forested shoulder on the left/north side of a wide gully.

Once across the river drainage, scramble diagonally left/northeast up through boulders then steep scrub to reach the crest of the forested shoulder. This section is VERY STEEP. The firs in the forest are thick and are not fun, so stay slightly right/south to remain in semi-open terrain. The forest ends at about 9,150 feet and a boulder scramble begins. The terrain above tree line is initially boulders then talus/scree and scrub then rocky outcrops. The face rock on the west side of Point 10460 on the southwest ridge goes at Class 3. Point 10460 is a small, rocky hump and the look of the connecting ridge to the gentle, elongated summit is ominous: very choppy and tedious.

From the top of Point 10460, descend over (or around) several Class 3 ridge towers to finally reach the low point/saddle on the ridge. Continue along the choppy ridge up over several more rocky towers then a BIG one. Skirt its left/west side on a ledge then rejoin the ridge just above that massive tower. Climb up over a final easy tower then work through some boulders then sagebrush to reach the top of Iron Mountain. The summit has a metal survey post in a small summit cairn. 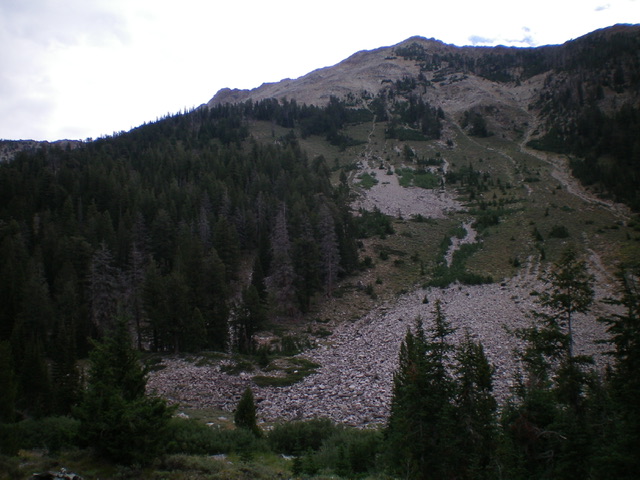 View of my ascent route on the west face of Iron Mountain from the departure point on Johnstone Pass Trail. Stay left of the massive boulder/talus gully (right of center) and climb the forested shoulder (left of center) up to Point 10460. The summit is not visible in this photo. Livingston Douglas Photo

From the summit, descend the rocky northwest ridge to a small, dirt (dark brown in color) ridge notch. This descent is a combination of Class 3 ridge rock/blocks/cliff bands and loose, steep-ish talus/scree. From the ridge notch, descend west-southwest down a face on loose, STEEP talus/scree/gravel in either minor gullies or minor ribs. You must grab for any boulders that you can (Class 3) and try to boot-ski the scree/gravel whenever possible.

Lower down, the slope moderates and some boulder hopping is necessary. The terrain then eases and veg (with scattered forest) takes over. Avoid the thick firs and stay in open or semi-open terrain whenever possible. Angle left-ish/southwest as you descend to intercept Johnstone Pass Trail as close to the trailhead as possible. Avoid the gullies (thick with veg and underlying rock) and stick to the minor ribs as you descend. Downclimb a few minor cliff bands to reach the valley floor. Find a gap in the willows and cross the East Fork Wood River on rocks/boulders to reach the Johnstone Pass Trail. Follow the trail for a short distance down to the trailhead. 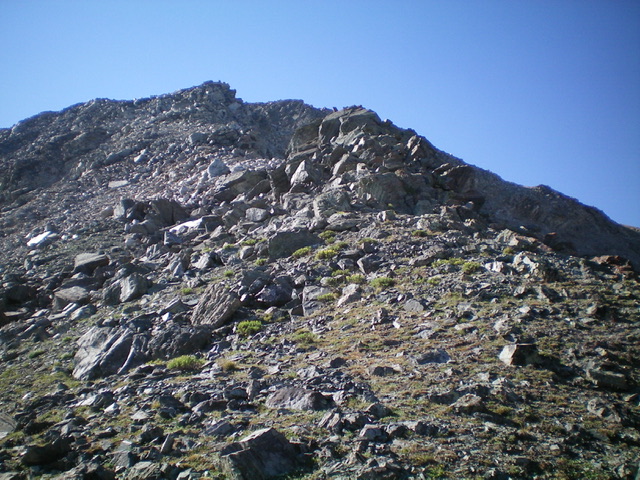 Looking up the rocky north ridge of Iron Mountain from the ridge saddle/notch. This was my descent route. Livingston Douglas Photo 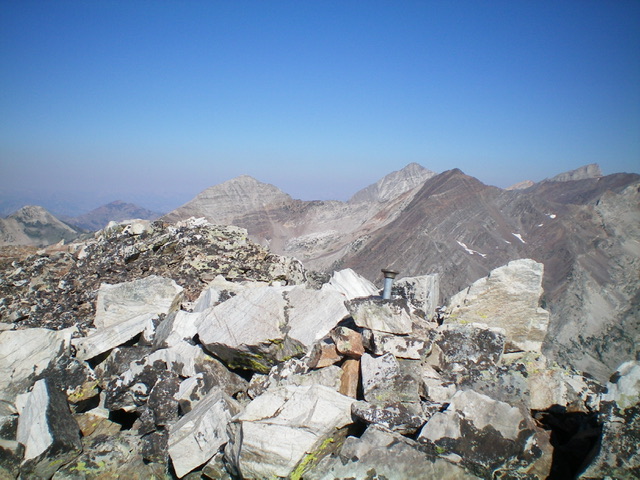 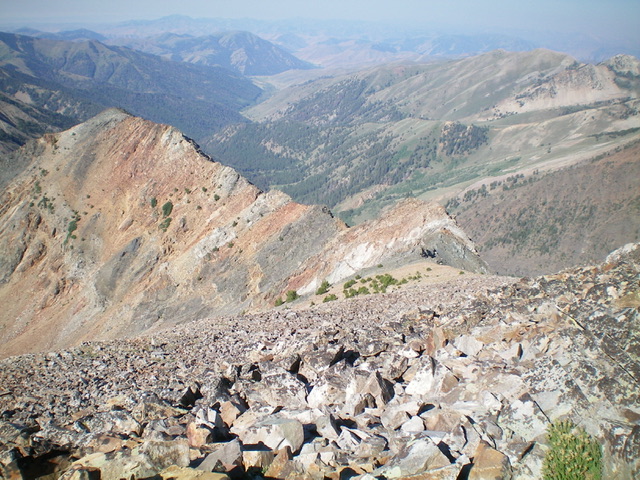 Looking back down the choppy, rugged southwest ridge of Iron Mountain from the summit. Now you can see why this peak is called Iron Mountain. Livingston Douglas Photo 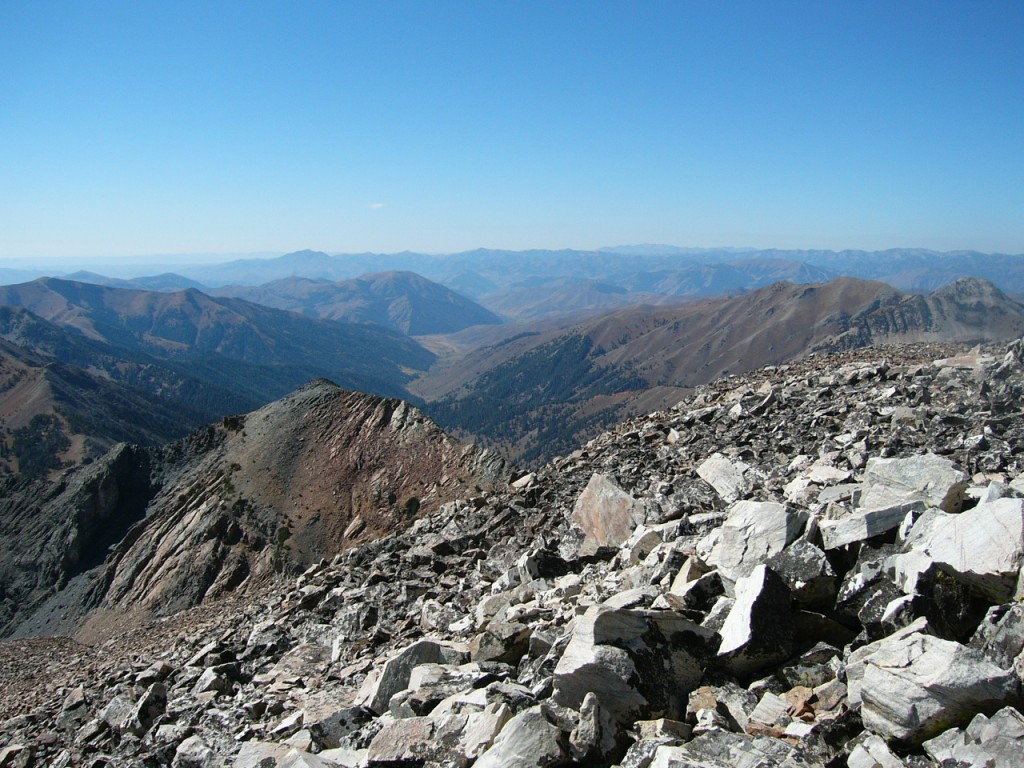 This view is from the summit looking down the ascent route. 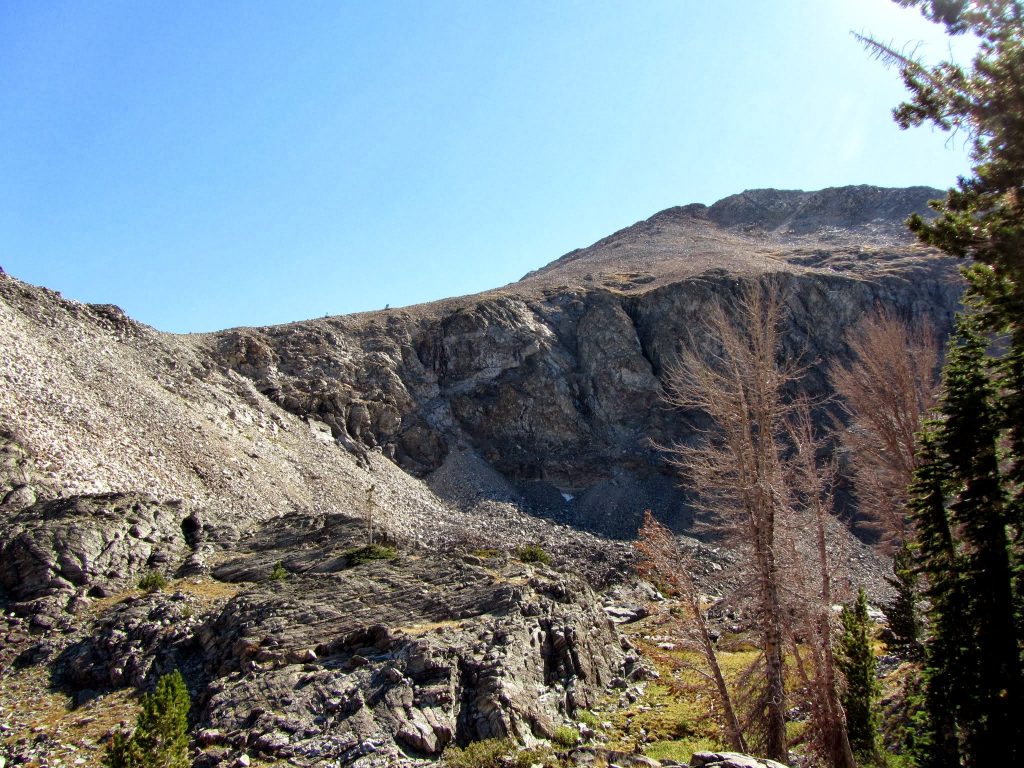 A view of the talus ramp to the ridge and the north face of Iron Mountain. George Reinier Photo 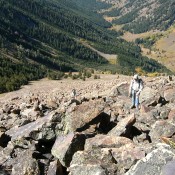 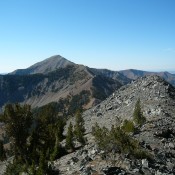 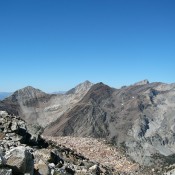 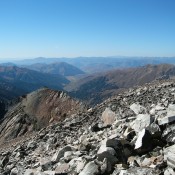