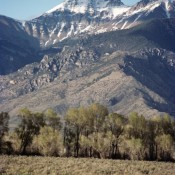 North Twin is a spectacular summit from almost any viewpoint. It is the 16th-most prominent summit in Idaho and is the highest point in the Southern Lost River Range. It is most often climbed from the west but the east side route is a classic approach and climb. USGS Sunset Peak 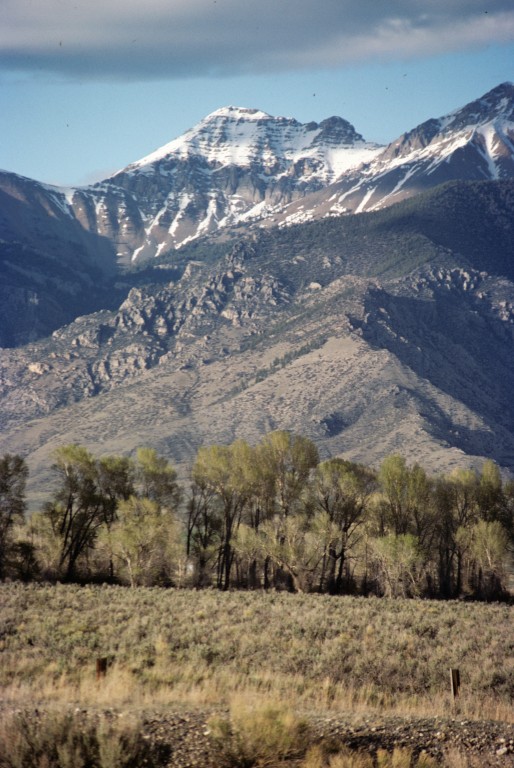 North Twin as viewed from US-93.

This route climbs to the saddle between North Twin and Red Cone and then follows the broad connecting ridge toward the summit until it disappears into the west face. From the saddle, it looks like there are cliffs blocking the route but they are easily navigated. The west side approach is straightforward and provides access to the base of the routes. A 4WD is recommended and high clearance is essential. 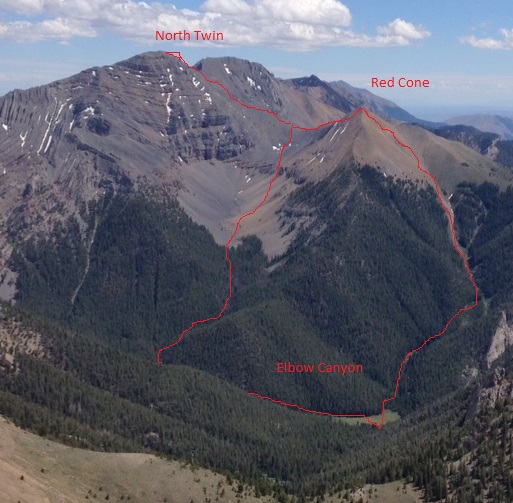 The route we followed started in the big meadow in Elbow Canyon. We took the left-hand line to the North Twin/Red Cone saddle. On the return, we traversed over Red Cone and then hiked down following the right-hand line. The Elbow Canyon Road is rough but was passable almost to the meadow. 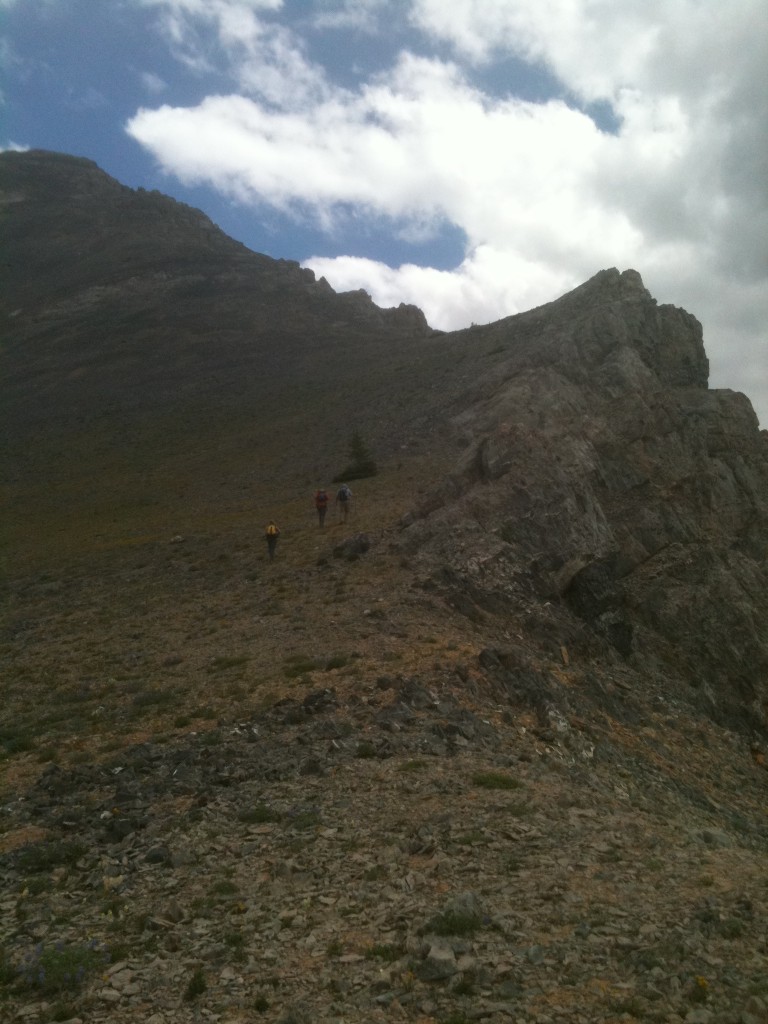 Climbing the South Ridge from the North Twin/Red Cone saddle. 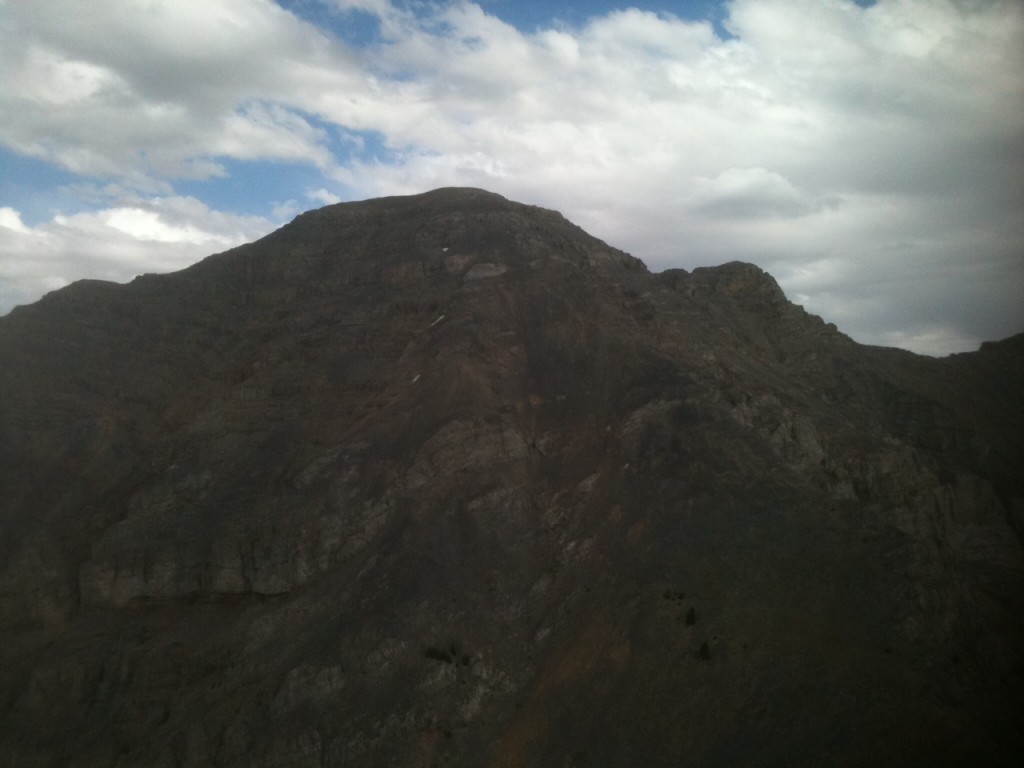 The South Face of North Twin. 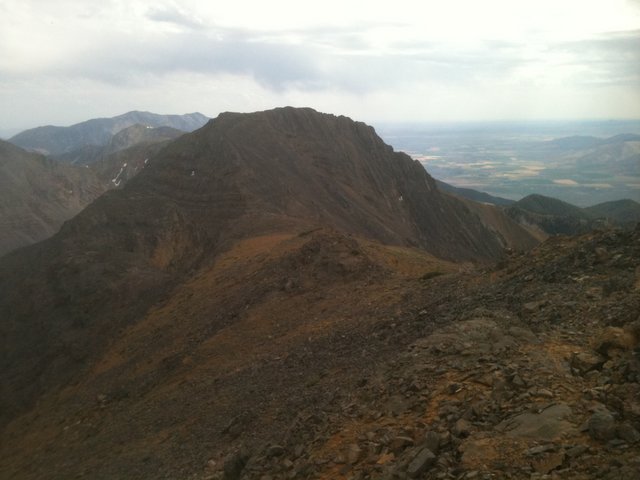 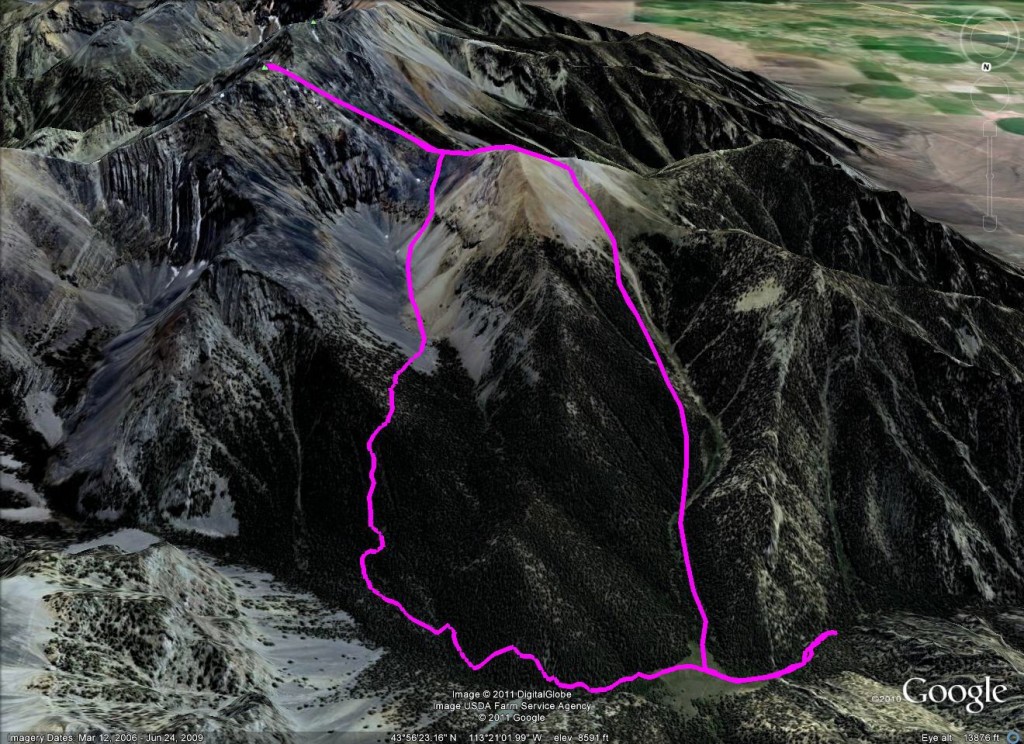 The east side of the peak is guarded by rugged foothills that are pierced by Cabin Creek [(A)(3)]. Driving up this approach requires a 4WD and a bit if courage if it’s early in the season as there are a number of spots that could be tricky when wet.

I traversed the two routes listed in the book in 1995 without making the summit thanks to a massive summer thunderstorm. We turned back about 100 feet below the summit with static electricity tickling our bodies. The ridge up from the South Twin/North Twin saddle is a bit complicated and requires good route-finding skills. We avoided towers blocking the route on the ridge’s west side. Descending or climbing the west face also requires good route-finding skills as there are a number of cliffs that must be avoided. 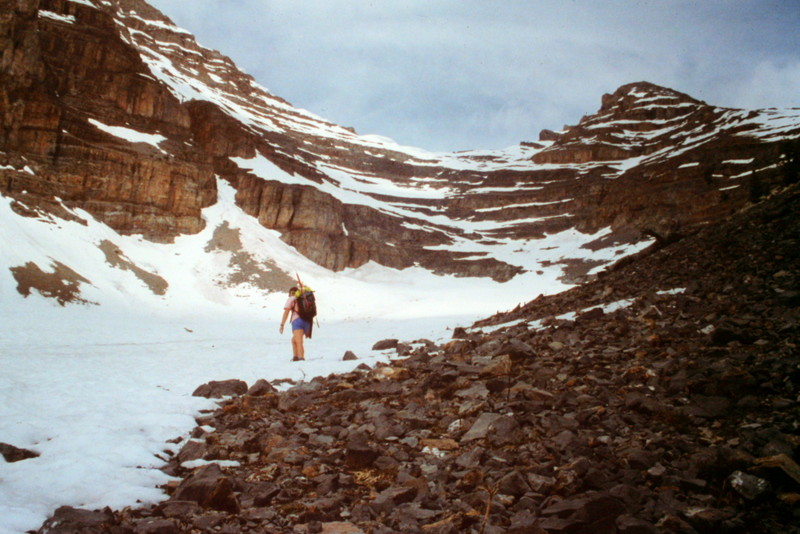 Looking up at the North Twin/South Twin saddle. From this vantage point, the headwall looks rugged but you can easily find a good route through it. 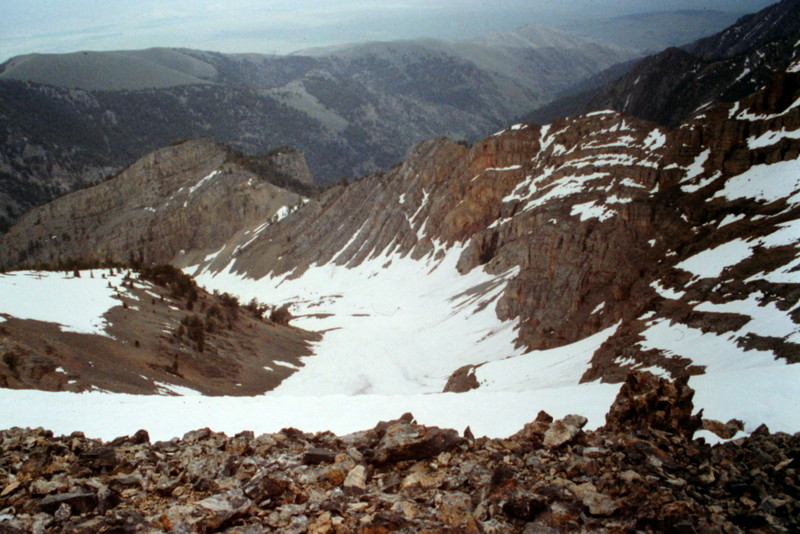 Looking down the drainage separating North Twin and South Twin from the North Twin/South Twin saddle. 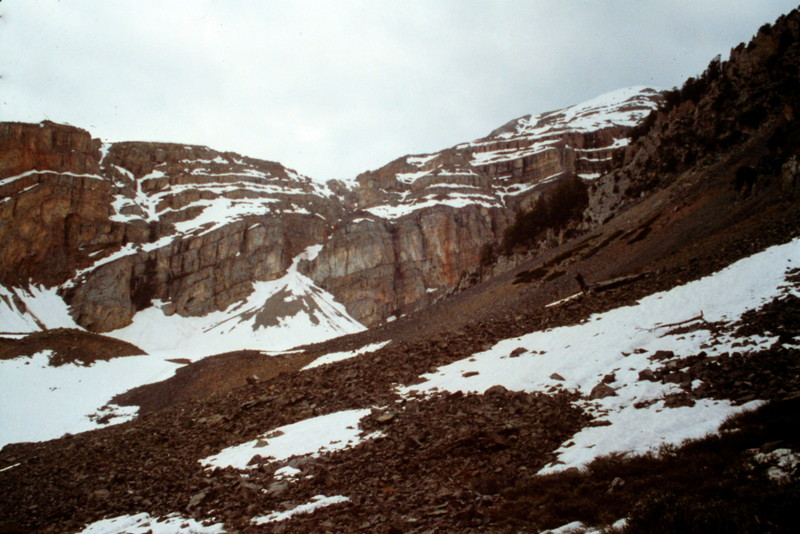 The scenery in Upper Cabin Creek is worth the effort. 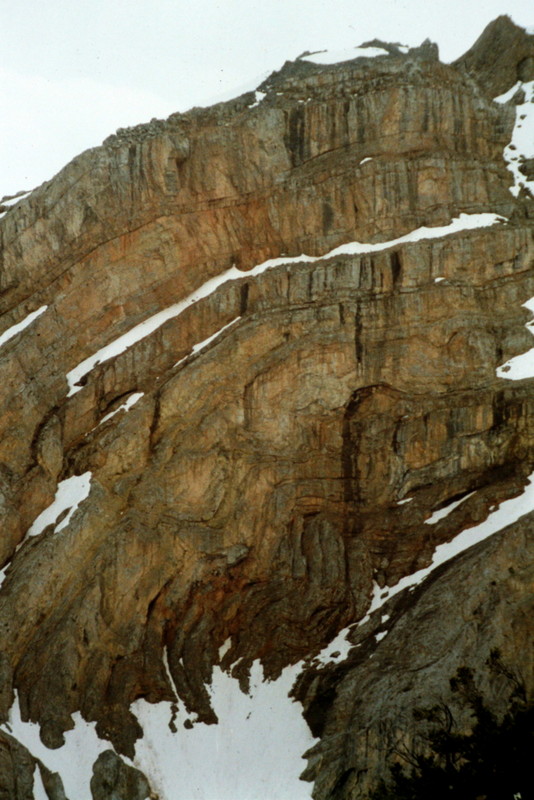 A cliff making up the peak’s East Face.

I descended then ascended the south ridge of North Twin as part of a ridge traverse from North Twin to South Twin. I ascended North Twin via the west face/west ridge from Elbow Canyon. This is a testy ridge as the Sunset Peak quadrangle suggests. The rock quality is poor, it has some steep sections, and even includes a Class 5 cliff face on the south side of Point 10936. This is a full-on Class 3 scramble. Do not take it lightly.

From the summit of North Twin, descend S then SSE down the ridge. You won’t be able to stay directly on the ridge crest due to numerous ridge towers and other ugly, ledge-y rock outcrops which can interrupt your descent with an impassable cliff band. But with perseverance, you’ll get down to a small saddle just north of Point 10936, a solid 250 feet below the summit. Don’t try to stay on the ridge here (as I did). Climbing up onto Point 10936 is not a problem, but descending south off of it IS a big problem (large cliff band). And there’s no easy way to circumvent it.

Learn from my mistake. Stop at the small saddle (10,860 feet) that lies just north of Point 10936. Descend WSW down a rotten gully that is a steep, loose mix of talus, scree, and gravel. You’ll have to descend about 300 feet in this gully to position yourself to cross a prominent arete that protrudes WSW from Point 10936. This arete has a wicked cliff band at 10,600 feet. Contour south, just underneath this cliff band and follow a goat trail that traverses to the North Twin/South Twin ridge saddle.

If you are climbing (rather than descending) the south ridge of North Twin, you will have to contour north around the base of the cliffy arete then battle with the loose talus/scree/gravel to ascend the 300 foot gully to regain the south ridge. Continue from that point up the south ridge, skirting ridge towers and ugly ridge cliff bands as necessary to reach the summit of North Twin. It’s not easy, but it’s doable. It has no deadly exposure and is never worse than Class 3.

A number of mountaineers have climbed over this peak from the north, passing over Peak 10677 on the way. They have used FS-214 to approach the peak from the north. FS-214 is not in the book and I do not have any first-hand information on this route. I have posted Ken Jones’ GPS track which shows this route. The road is gated at the point where Ken started. 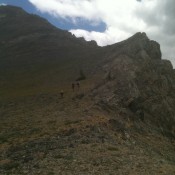 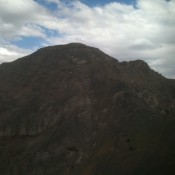 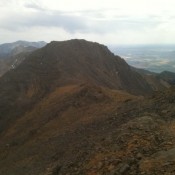 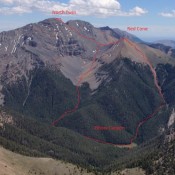 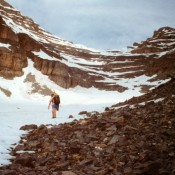 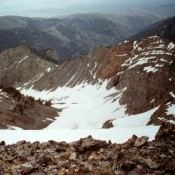 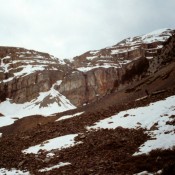 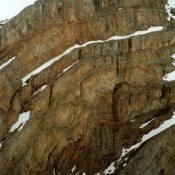