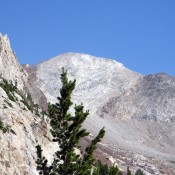 Climbing and access information for this peak is on Page 252 of the book. The book describes two routes, one for the southeast face and one for the south ridge. There are problems with both routes. In my opinion, the south ridge route is not practical for two reasons. First, the Forest Service has abandoned the Johnstone Pass Trail (because the slopes below the pass kept sliding) making access to the ridge more difficult. Second, the rock obstacles on the ridge are both complicated and friable. The Southeast Face Route described in the book is a good route but reaching it is difficult because of the loss of the Johnstone Pass Trail. 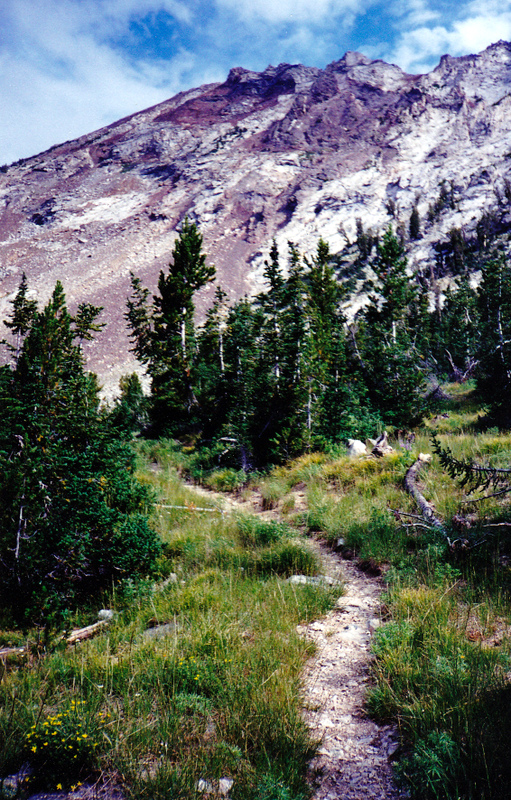 The East Fork Wood River Trail just before it switchbacks right to gain the precipitous Johnstone Pass. Straight ahead is the The Box on the Pioneer Mountains Crest. The upper section of the Southwest Rib Route is on the left skyline. Part of the serrated Box/Johnstone Pass Ridge is also visible. Rick Baugher Photo and Commentary

Primary access is via FSR-118/East Fork Big Wood River Road [(B)(1) on Page 258]. Follow this road north to its end. The road deteriorates after it passes Federal Gulch Campground. A 4WD is recommended. There is parking for several cars at the road’s end at just over 8,000 feet. The abandoned Johnstone Pass Trail [(B)(1)(a) on Page 258] begins at this point. Although no longer maintained, the trail is in fair shape as it climbs up the valley. 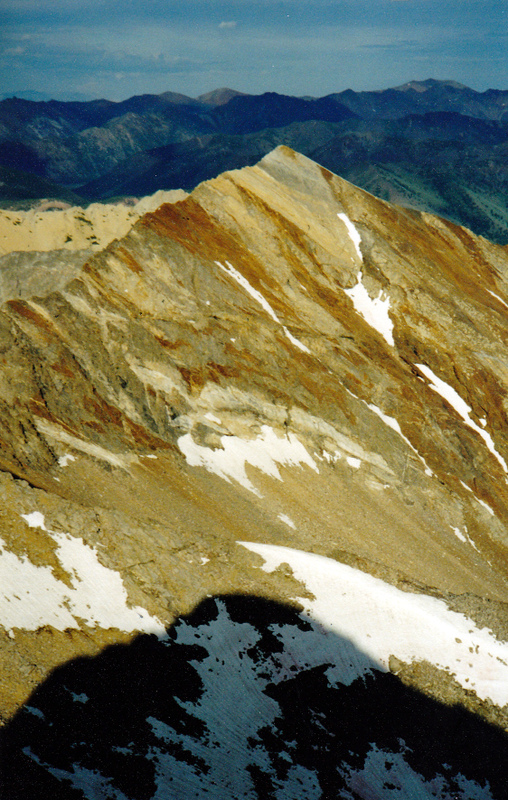 This photo of The Box was taken from Big Basin Peak (note its shadow in the foreground) and shows the peak’s distinctive stripes. Rick Baugher Photo 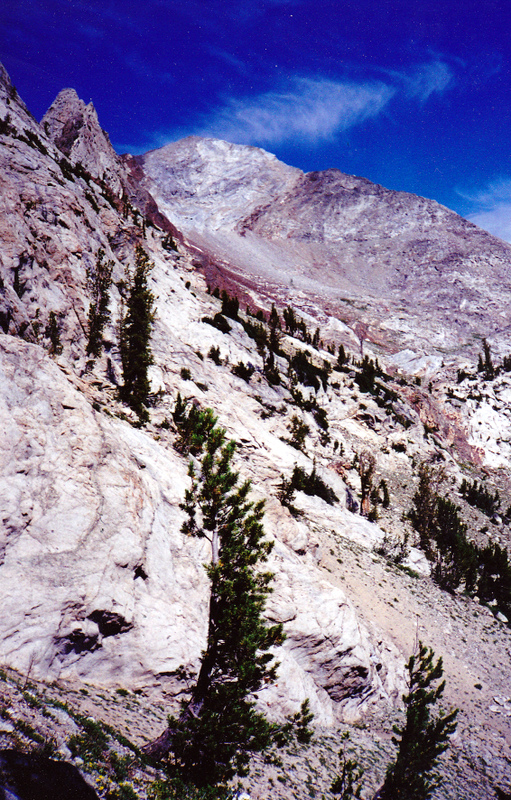 This photo shows The Box from a spot near Johnstone Pass. Rick Baugher states that “most of the gentle-looking east ridge involves Class 3 climbing over granite slabs and blocks. About 200 feet below the summit, the route crosses light-gray limestone that forms a 25-foot band of Class 4 climbing.” Rick Baugher Photo and Commentary

My friend Brian and I climbed The Box via a Class 2 route variation. The route was a nice scramble. Follow Rick Baugher’s route as described in the book from Upper Box Canyon Lake but, at around 10,900 feet, there is a rock ledge that cuts across the southeast face. Follow this across the face to the south ridge for an easy scramble to the top. Attached is a picture of the beginning of the rock ledge and another picture of the route we took. 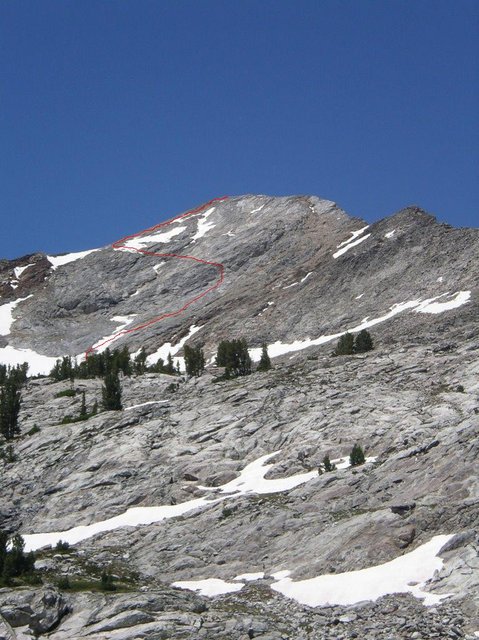 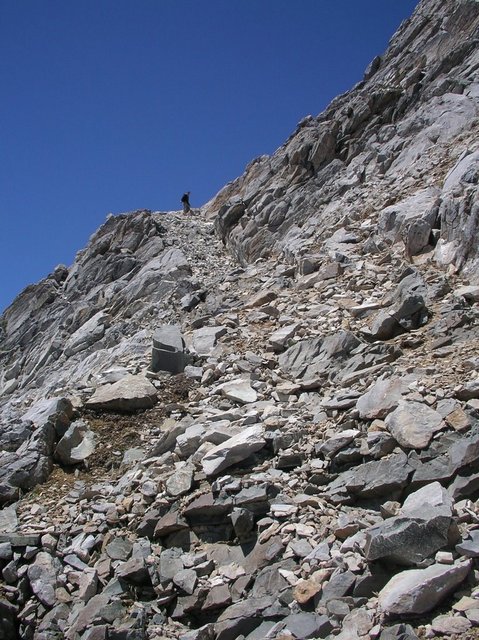 Editor’s Note: Judi Steciak and Carl Hamke provided the original Southwest Face Route information. I roughly followed their route in 2020 but rather than continuing up the gully to the south ridge, I climbed directly to the summit as shown on my GPS track set out below. I have expanded on their route description.

Follow the Johnstone Pass Trail north up the valley. At the 9,000-foot contour, the trail turns abruptly uphill. The route leaves the trail at this point, first crossing a somewhat flat meadow and then climbing up a talus headwall to the right of a cascading stream. At the top of the headwall, you are west of and directly below the summit. Steciak and Hamke ascended the gully on the south side of the face (shown in the photo below) to the top of the south ridge and then followed the ridge to the summit. Jason Floyd and I started up the gully. After gaining up roughly 200 feet, we exited the gully to the left, angling directly for the summit across steep, loose talus and rubble-covered slabs. Our line eventually reached a rib of broken granite which we followed to the summit. Round trip was 5.8 miles with 3,100 feet of elevation gain. 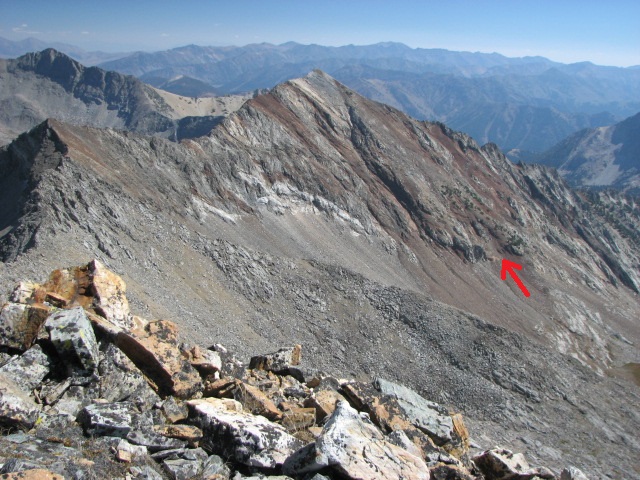 The Class 3 gully route on the west face of The Box. 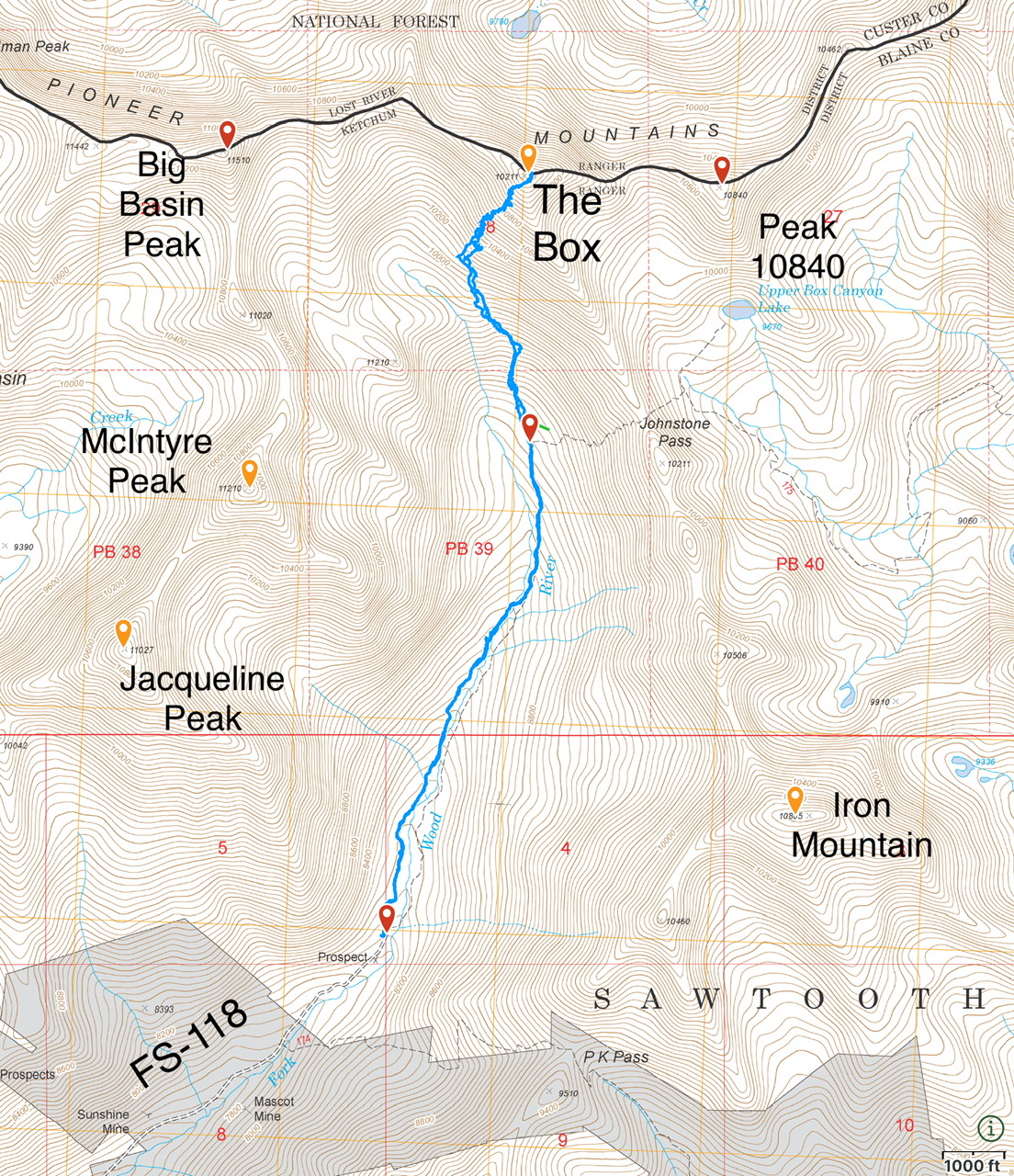 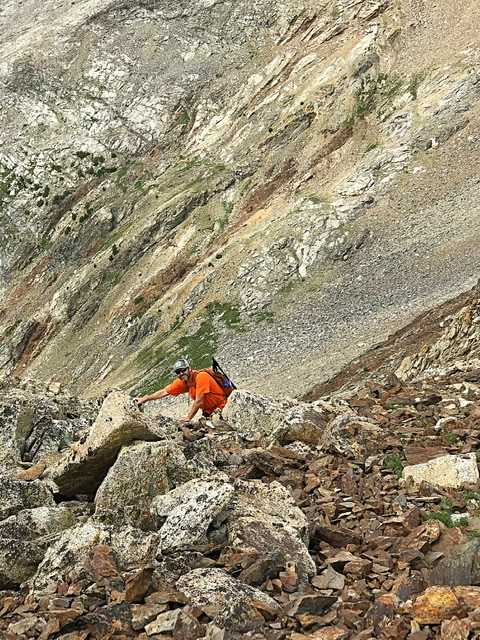 Jason Floyd at the bottom of the granite rib roughly 300 feet below the summit. 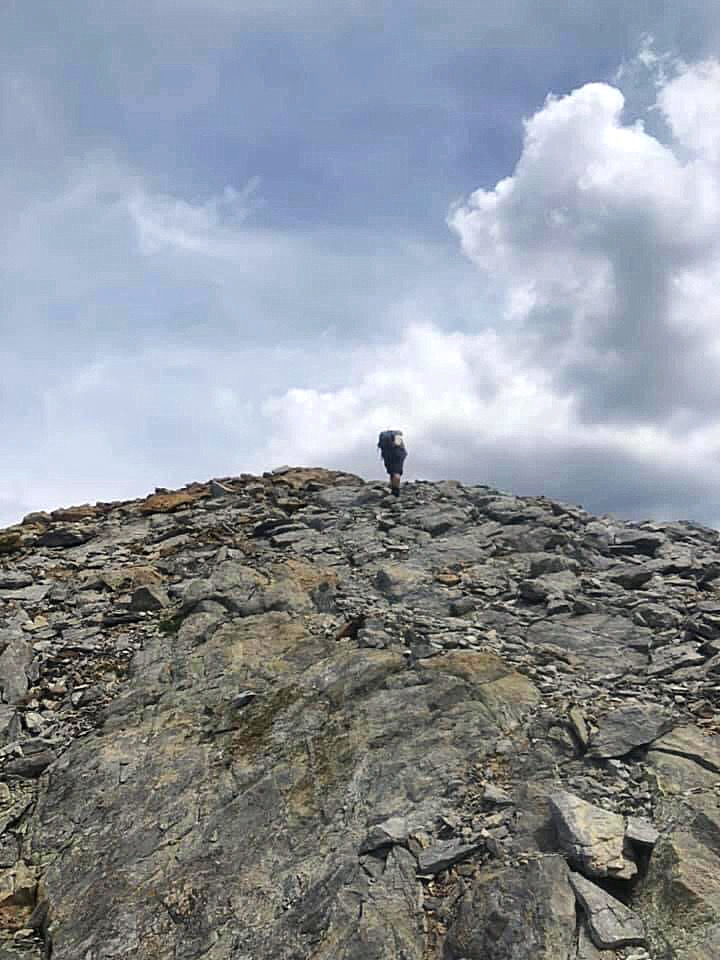 The rib flattens out for the final 100 feet to the summit. Jason Floyd Photo 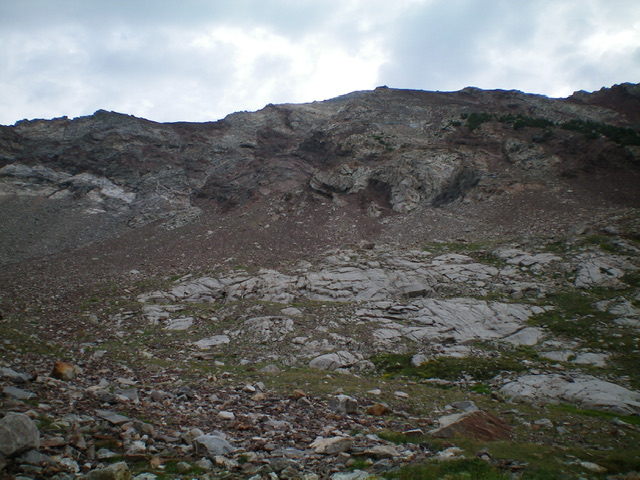 The southwest face of The Box as viewed from the elongated meadow at its base. My ascent gully is marked by the dark brown rock in dead center. Livingston Douglas Photo

Leave the trail as it starts moving away from the valley floor in semi-open terrain. Head northwest, dropping about 20 feet to cross a dry gully initially and aiming to reach the center of the valley floor higher up. Angle diagonally left to reach the wet creek drainage by crossing scrub then a few boulder/talus slopes. Stay well right/east of the creek drainage on open rock (glacial moraine type terrain). Climb up a headwall of sorts by boulder-hopping and slab climbing to reach a magnificent, wet meadow with green veg to keep the mountain goats fed and hydrated. This elongated meadow sits at the base of the intimidating southwest face of The Box.

From the middle of the meadow, head straight northeast up a scree slope to reach the mouth of the southwest gully. It is the most obvious gully in front of you, but it is no picnic. This is not the Steciak/Hamke gully. I’m not sure exactly where that one is but it must be left/west of it. The southwest gully has dark brown rock on both sides of it (initially) then on its right-hand side only (a little farther up). There were no other obvious gullies on the southwest face, only face rock (which may also be climbable). Once at the base of the gully, scramble northeast up the narrow, very loose rock in the gully (talus/scree and gravel) to reach a double chockstone that blocks the gully. Steciak/Hamke never mentioned this so it must be a different gully from theirs.

Climb up and left around the double chockstone on steep ledges and chutes (Class 3+) on a buttress of sorts. This is the crux of the climb. Once atop the chockstones, you reach nirvana: wider, open, flatter terrain. Yes, it’s still loose talus/scree but you can now see your way up to the summit ridge. Scramble up the wider gully, angling left-ish/north on a scree slope to reach the crest of the northwest ridge. Once on the ridge crest (large cairn here), head right/southeast up narrow, blocky Class 2 ridge rock for about 0.2 miles to reach the small summit of The Box. The summit has a modest summit cairn. 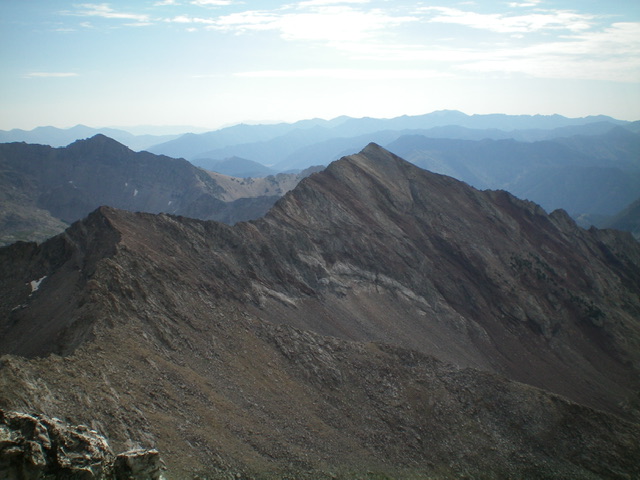 The Box (in mid-ground) and its western aspects as viewed from Big Basin Peak. The rugged connecting ridge is left of center. Livingston Douglas Photo 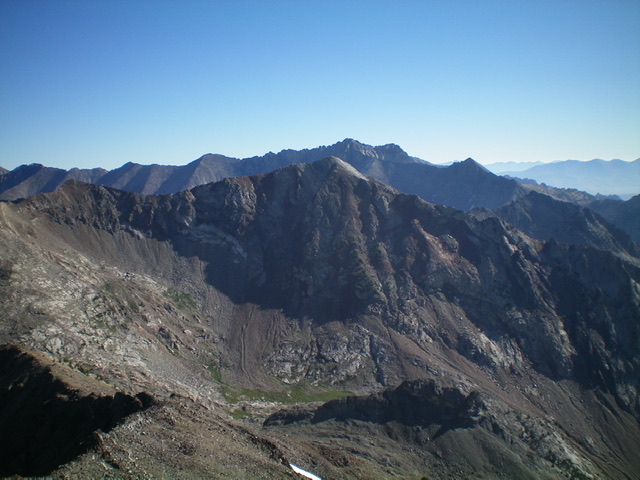 The Box (in mid-ground) as viewed from McIntyre Peak to its southwest. Livingston Douglas Photo

George Reinier’s photos from his climb of the southeast face as described in the book. As noted previously, this route is difficult to reach because of the loss of the Johnstone Pass Trail. 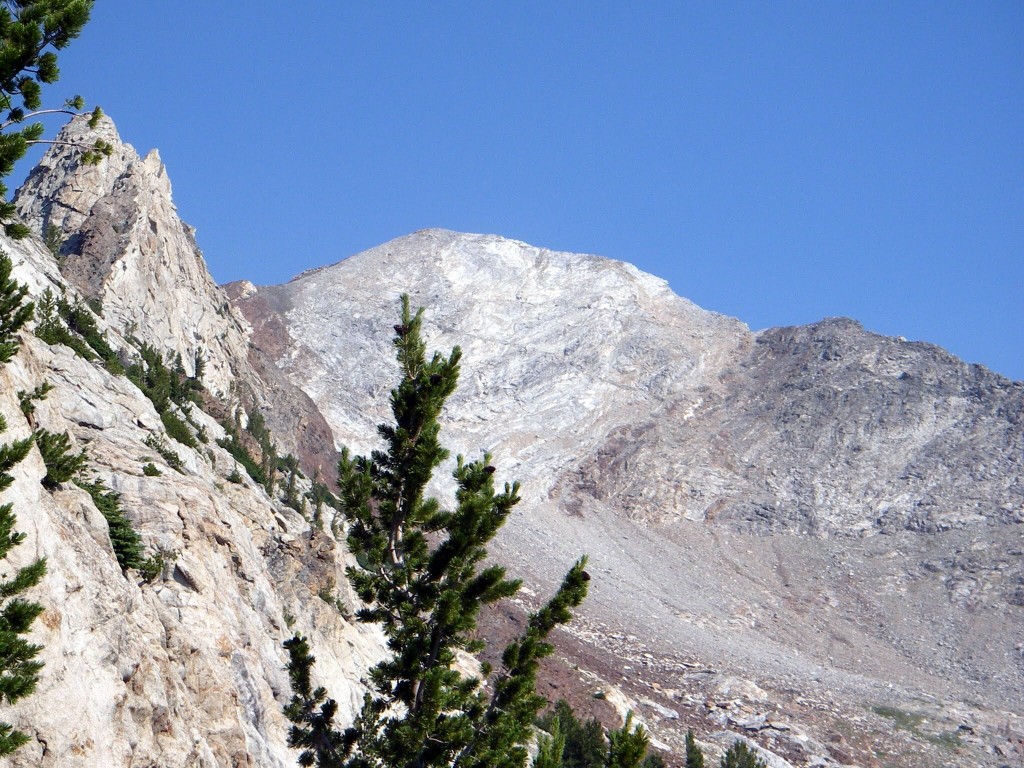 The Box as viewed from a point near Johnstone Pass. George Reinier Photo 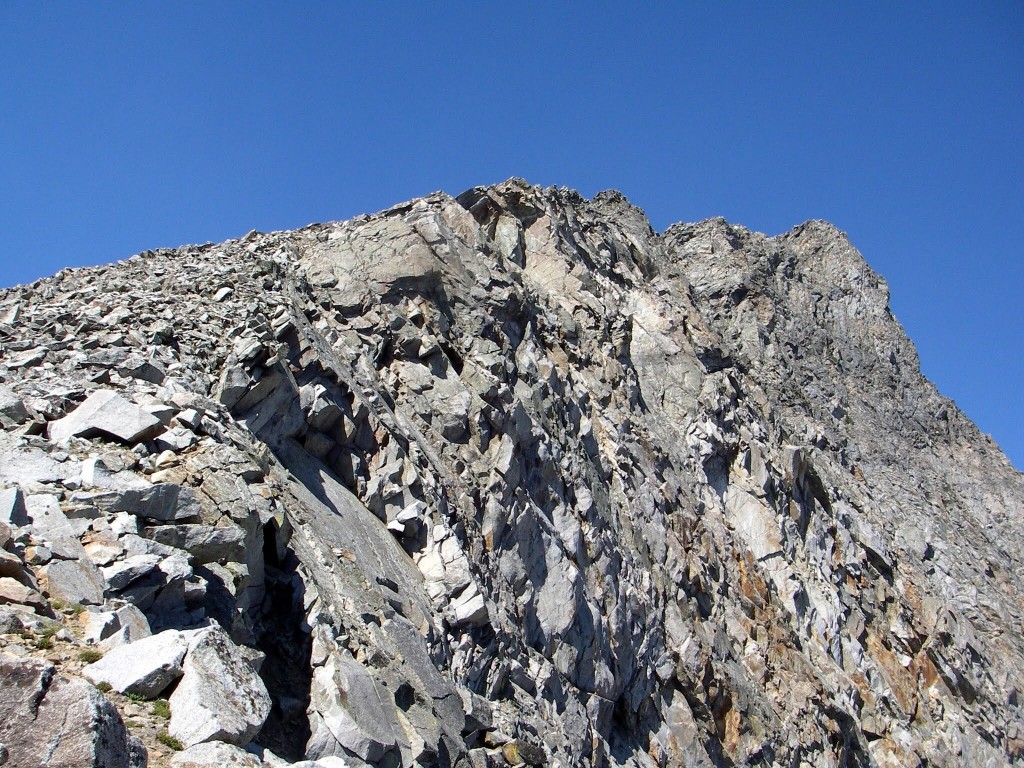 The upper reaches of The Box. George Reinier Photo 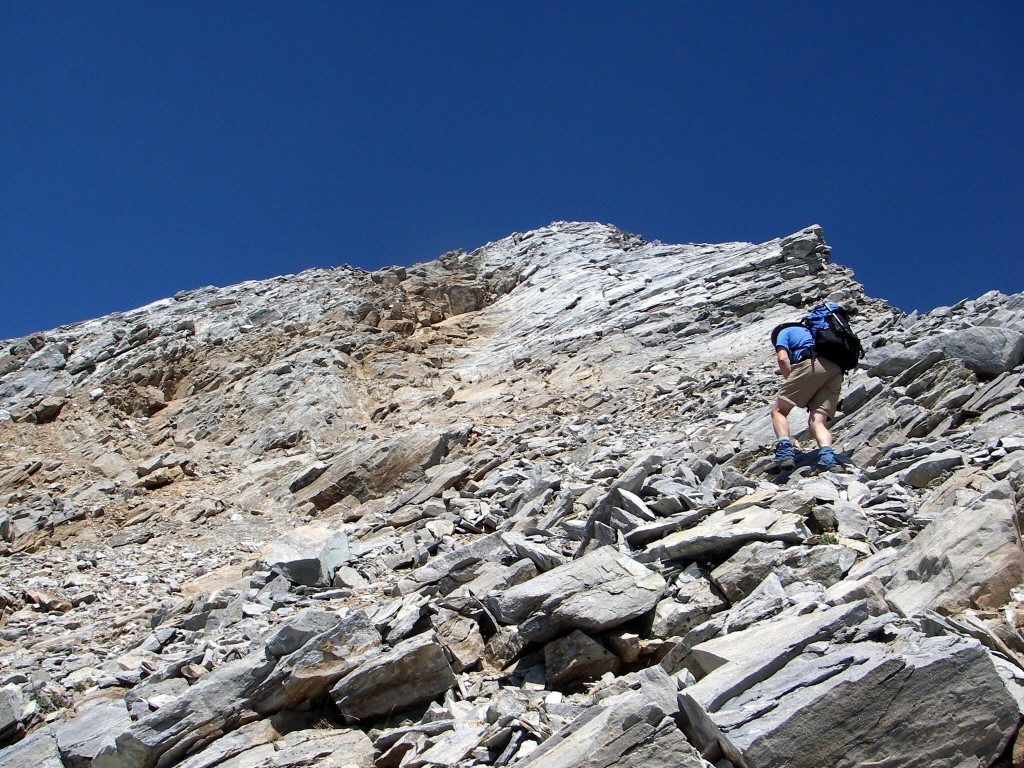 Working up toward the face. George Reinier Photo 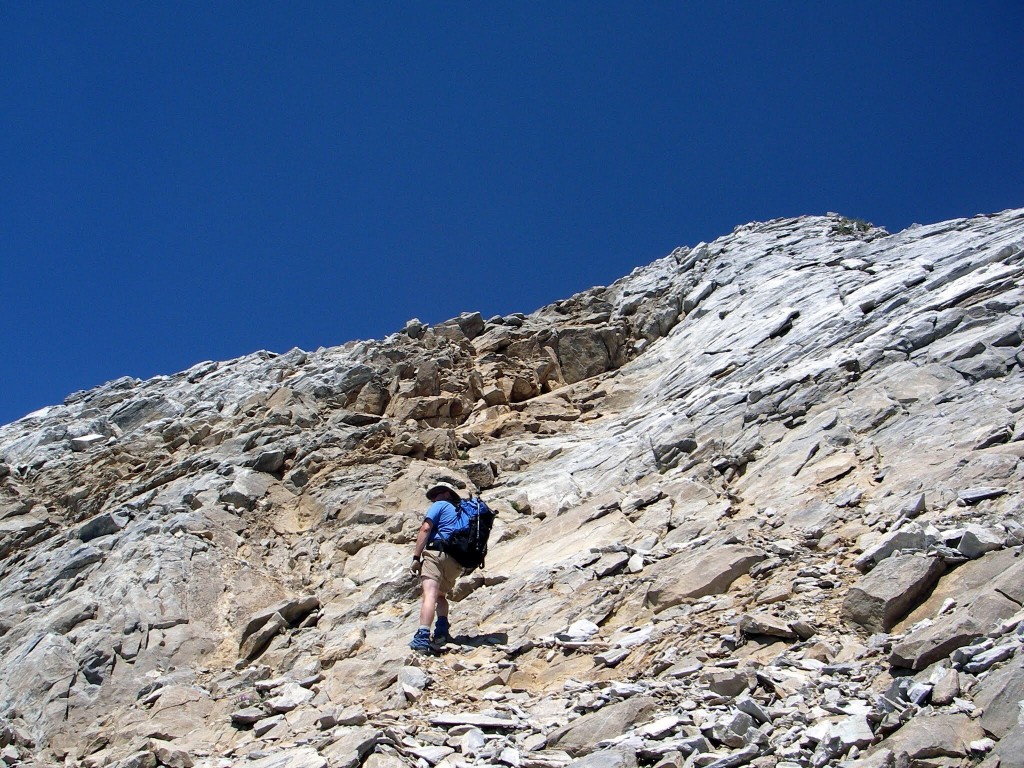 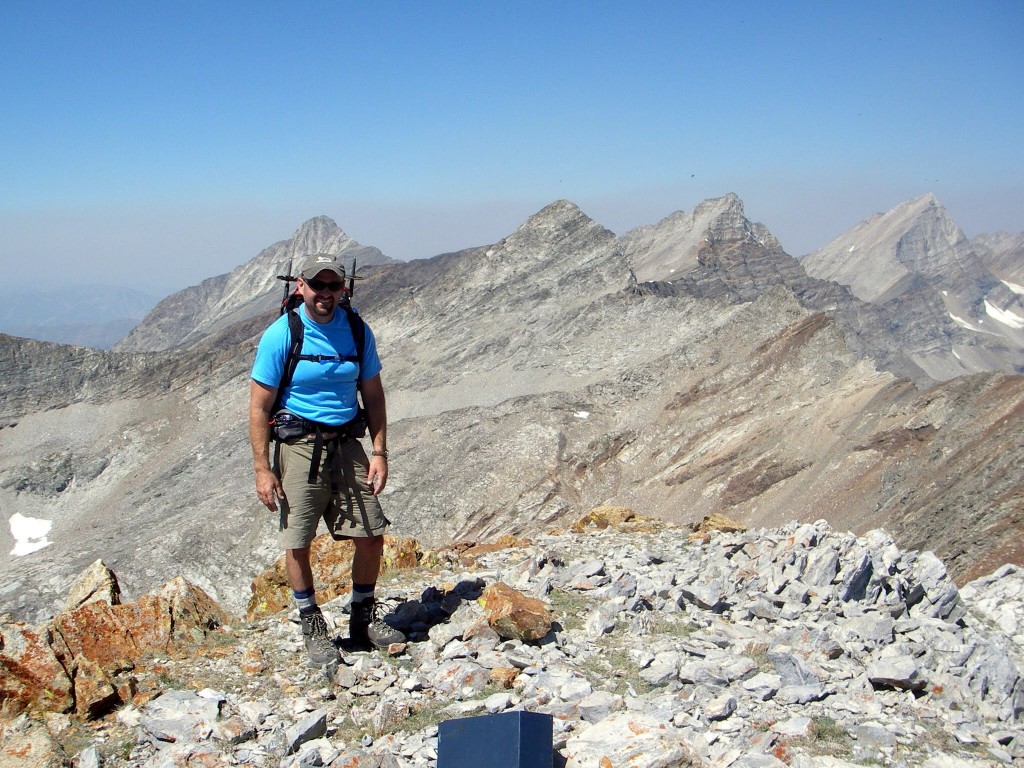 The summit of The Box

Winter panorama of the central Pioneers from the summit of The Box. Matt Durrant Photo