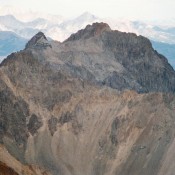 Climbing and access information for this peak is on Page 236 of the book. There are two route descriptions set out below that are not in the book, a GPS track for the North Ridge, and a discussion regarding the date of the first ascent. Judi Steciak, Carl Hamke, Rick Baugher, Derek Percoski and James Squires contributed the route information and photos found below. Updated October 2020

Roaring Peak is one the most impressive summits in Idaho. Few know about it because of its remote location near the headwaters of the East Fork Salmon River. The peak has intrigued me for years, but I have only made one aborted attempt on it.

Roaring Peak is a spectacular, difficult-looking summit when viewed from Glassford Peak or the upper reaches of the East Fork Salmon River. It is unclear who made the first ascent. I received one report of a 1975 ascent second-hand. The actual first ascent may have occurred in 2006 as discussed below. Scroll down for additional route information and a route photo. 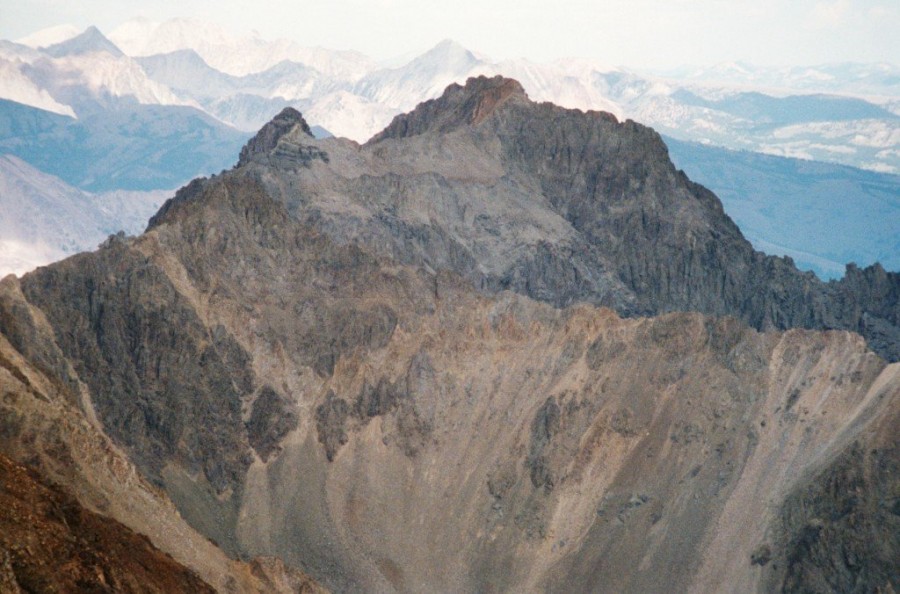 Peak 11458 as viewed from Glassford Peak. 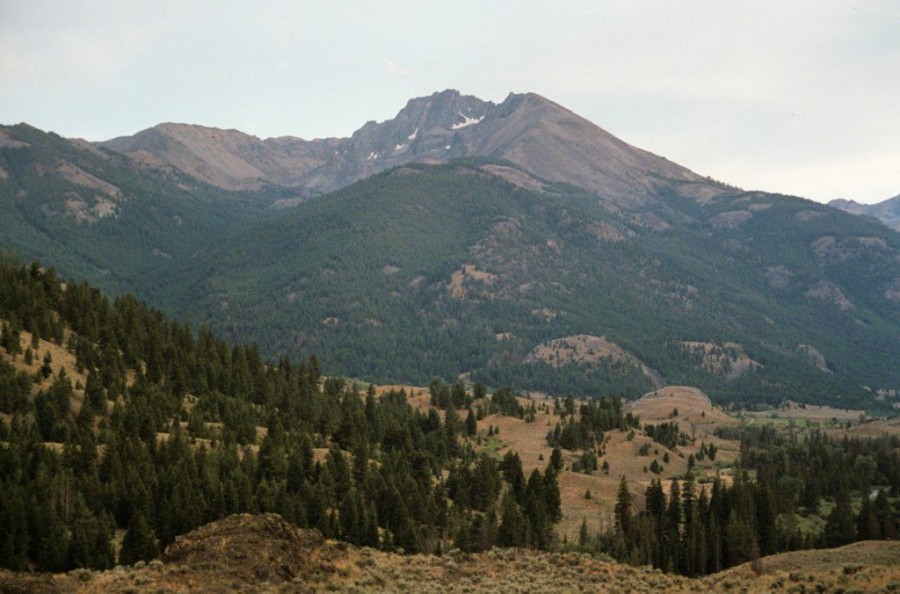 This route is not in the book. Judi Steciak and Carl Hamke provided the following route information. See their article on the Missing Eleveners in the Climbing History Section of this site.

South Ridge via the Southeast Couloir, Class 3 by Judi Steciak

From the East Fork Salmon River Road and then FS-063 [(C)(3)on Page 242] which leads up West Pass Creek, drive to where the road is washed out at ~7,300 feet.  Wade the creek and follow the road until the drainage from Lost Mine Canyon enters from the west. Wade across again and work your way high above the canyon floor on intermittent game trails until you can head up the intermittent stream that drains the cirque below the Southeast Face.

A prominent couloir, visible on the topographic map, divides the Southeast Face just south of the East Ridge. Ascend the couloir and follow its left/south fork to loose talus high on the Southeast Face and the crest of the South Ridge. Follow the ridge towards the summit, dropping down the West Side to bypass a prominent orange tower before climbing back up to the crest and the summit via a ravine on relatively solid rock. 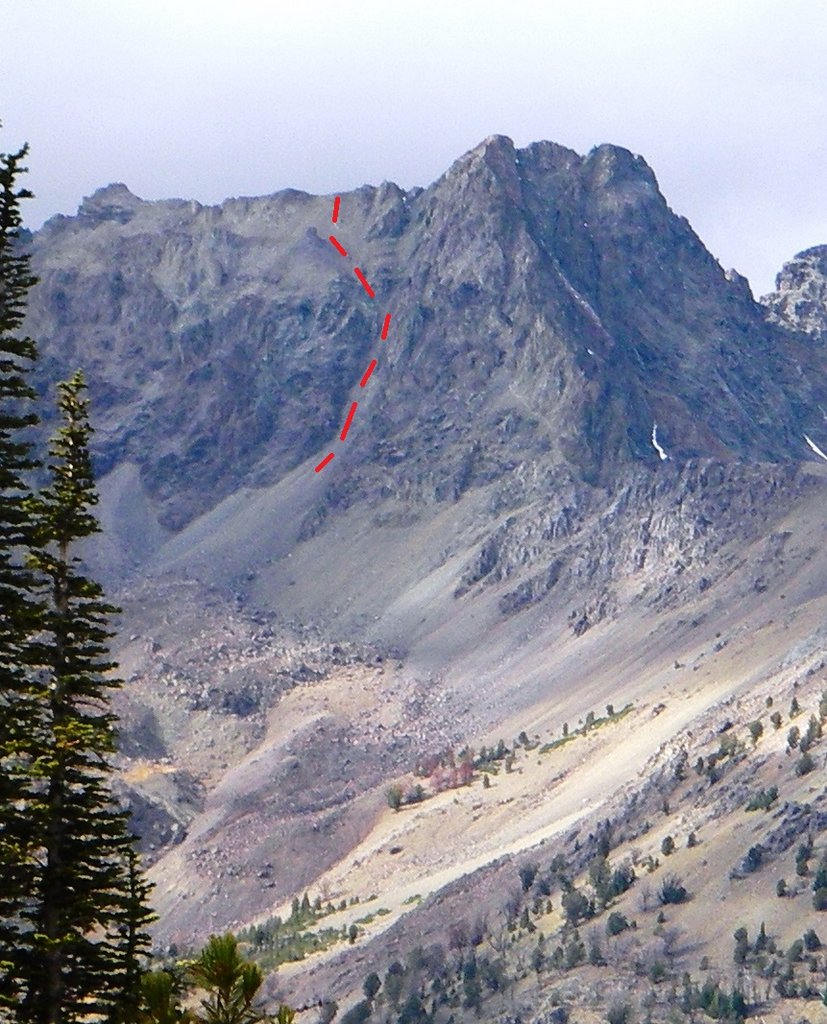 James Squires climbed this route in 2020 and provided the following comments and GPS track: “I recently did the Steciak/Hamke route on this mountain and I have the GPS track. I didn’t feel very comfortable returning on the same route, so my descent line is to the west into Ibex Canyon. I think an approach from the west would be possible but a horrible slog. 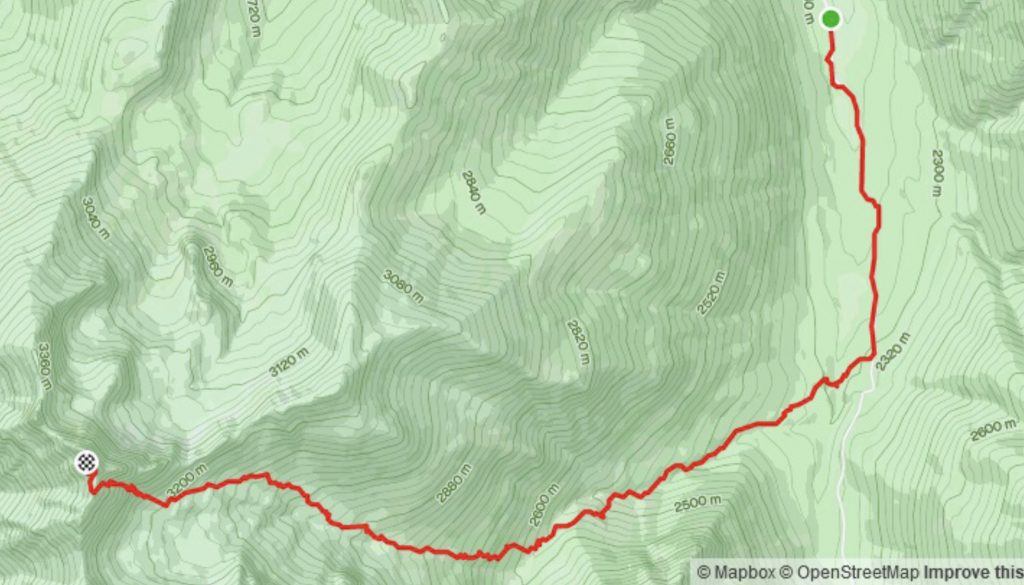 The North Ridge is likely the route of the first ascent, although the date and first ascent line are in question. Thanks to Rick Baugher, Derek Percoski and Brett Sergenian for the additional information. I will start with Brett’s 2018 ascent:

On the ridge, I would recommend bypassing the first high point on its East Side but do not go back down the base of the first gully as it was quite steep (would be difficult to down-climb). The Middle Summit is the highest point. The South Summit is about 50 feet lower and is more difficult. I think staying on the south side of the drainage involves less bushwhacking and deadfall. 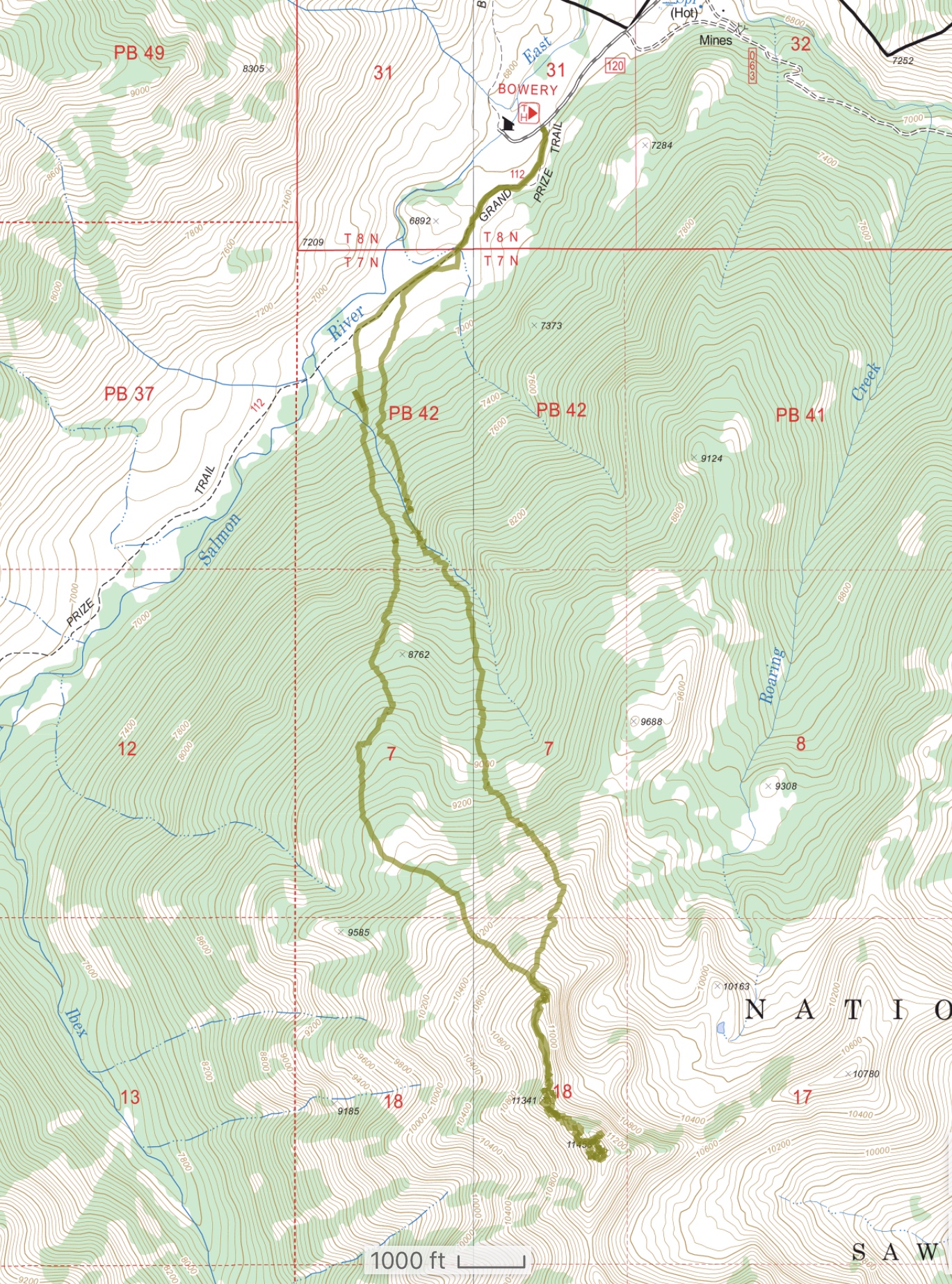 Rick Baugher provided the following information on a climb that may have been the first ascent by David Ferguson and Steve Grantham:

After some gentle coaxing, Dave Ferguson was kind enough to send me info on this peak, whether it be known to you as 11458, Roaring Peak, Lost Mind Peak, or? Perhaps you could contact Dave/Steve, get it first hand, dress it up, and put it on your website. Here’s a teaser:

Roaring Peak has been called one of Idaho’s most-impressive mountains. It is the summit of Glassford Peak’s North Ridge, on the back side of the Boulder Mountains. Its roar can be seen and felt from the upper reaches of East Fork Salmon River.

***”Breaking camp on the early morning of July 26, 2006, Dave Ferguson and Steve Grantham had spotted 26 elk by their 7AM starting time at Bowery Guard Station (6,800 feet). Making great time ascending the trail-less North Ridge overlooking Roaring Creek, by 11AM, they had reached Point 11341, just 1/4 mile shy of their destination. Here the climbing began in earnest. An hour and a half later, after carefully negotiating several loose Class 4 sections, the summit prize was theirs. This was a peak well won….”

I believe you did some recon here in 1994. Page 236 states “The only known route ascends its North Ridge.” When I quizzed Dave whether he found a cairn on top, he wasn’t sure. Could it be that their 2006 ascent was in fact a first? 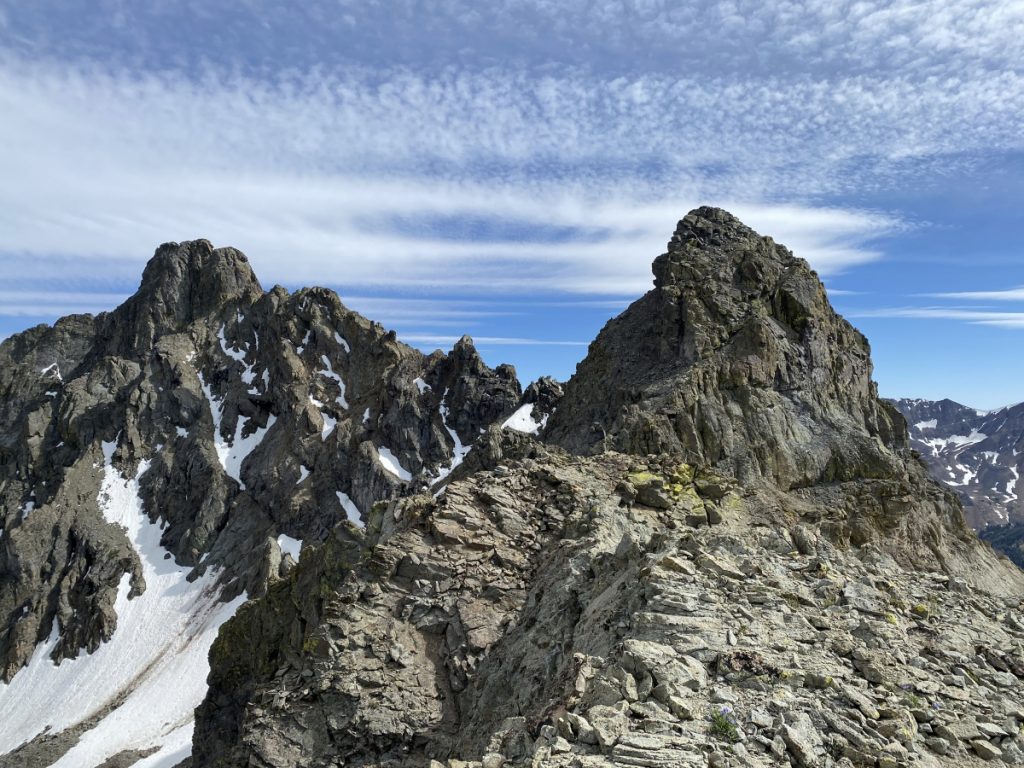 Derek Percoski reported “I climbed the north ridge. With careful route-finding, it doesn’t need to be a Class 4 endeavor. The upper route is characterized by intimidating towers, but I didn’t climb any of them. I was out there mid-July on a very low snow year so I didn’t bring an ice axe, however it would have come in handy to cross or even ascend a coulior.” Derek Percoski Photo 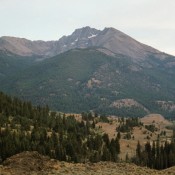