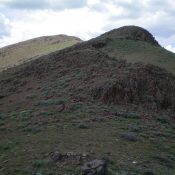 Peak 5764 is a sub-peak on the southwest ridge/face of Peak 7900. It sits above Barn Canyon and Lava Lake to the southwest. Peak 5764 is a fun, rocky scramble from Lava Lake Road via the south ridge. The land to the west and north of Peak 5764 is private property. The summit high point is on private land but barely so. It is just north of the BLM boundary and is not posted. USGS Blizzard Mountain South 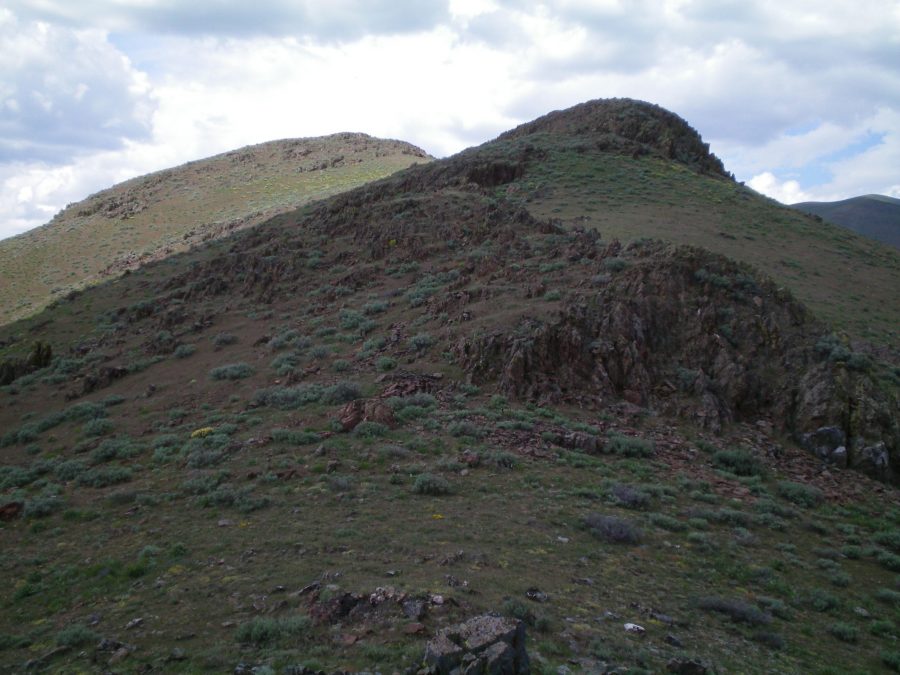 The upper section of the south ridge of Peak 5764. Livingston Douglas Photo

Lava Lake Road (unsigned) is located just over 2.5 miles east of Lava Lake on US-20. It is 8.9 miles west of the entrance to Craters of the Moon National Monument on US-20. This gravel road is on the north side of US-20. Drive 1.0 mile northwest on Lava Lake Road to an unsigned jeep track on the right/north side of the road. Drive 0.1 mile up this jeep track to a cattle meadow. Park here (5,250 feet). 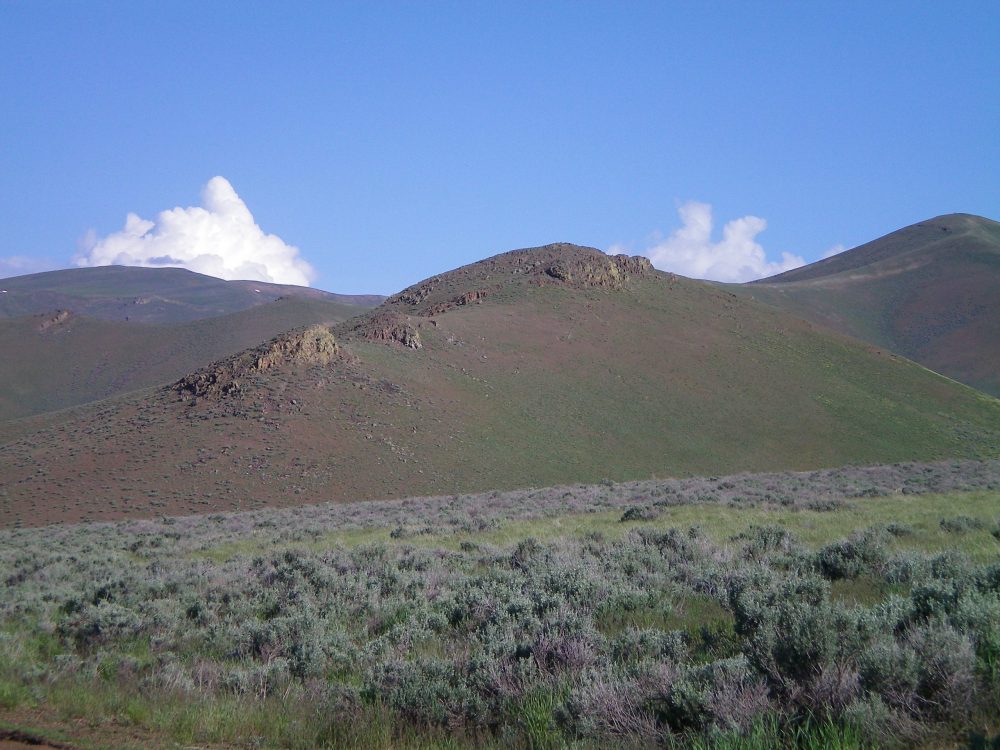 Peak 5764 as viewed from the southeast. The south ridge goes from the lower left to the middle of the photo, which is the summit. Notice the rocky outcrops on the lower section of the south ridge. Livingston Douglas Photo

From the grassy meadow, scramble north up the grass/sagebrush hillside to the base of the rocky outcrops on the south ridge. Climb up through, or over, the rocky terrain (outcrops/talus/scree) over several false summits to reach the [slightly-higher] true summit at the ridge’s north end. The summit is a small rocky outcrop with a modest cairn. I added a few more pieces of talus to the cairn. There is a nice view of Lava Lake from here. 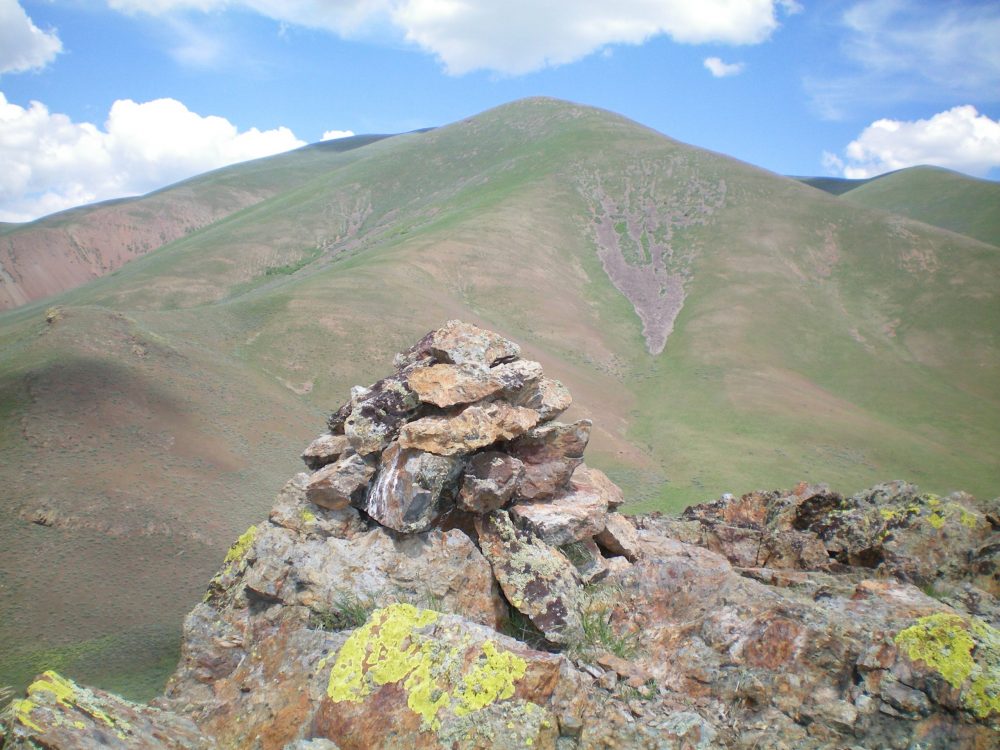 The summit cairn atop Peak 5764 with Peak 7900 in the background. Livingston Douglas Photo

From the summit, descend a scrub and gravel slope eastward to reach the gentle saddle of sagebrush. The lower part of the east face is thick, tall sagebrush. A fence row crosses the saddle from southwest to northeast. The area north of this fence row is private land. Cross a cattle gate to reach the saddle’s high point slightly south-southeast of the fence row. From the saddle, follow a 2-track jeep road south-southeast then south to return to your parked vehicle. 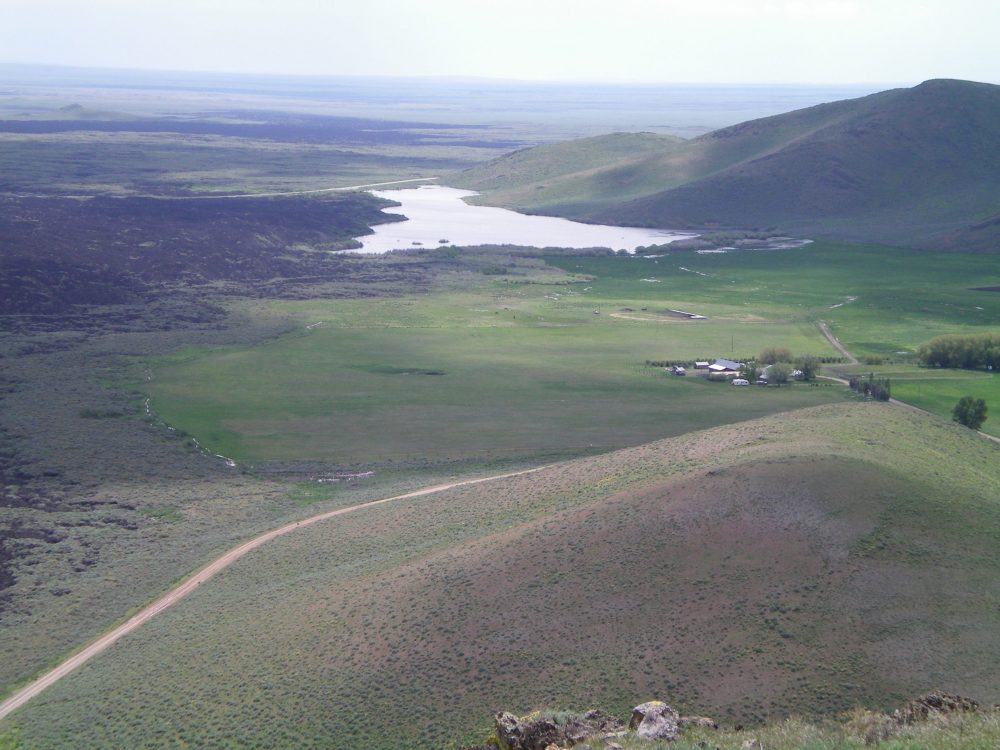 View of Lava Lake from the summit of Peak 5764. Livingston Douglas Photo