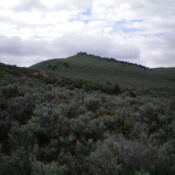 Peak 5821 is a hump that is sandwiched between North Junipers HP and South Junipers HP. This area is a mix of private and public land, so be careful. This hike can be done entirely on BLM land. Peak 5821 can be climbed either solo or in combination with North Junipers HP or Peak 5961. It is most easily reached from Grassy Ridge Road to the north. This route avoids the dubious sandy roads that could you leave you stranded in deep sand. USGS Big Grassy Ridge 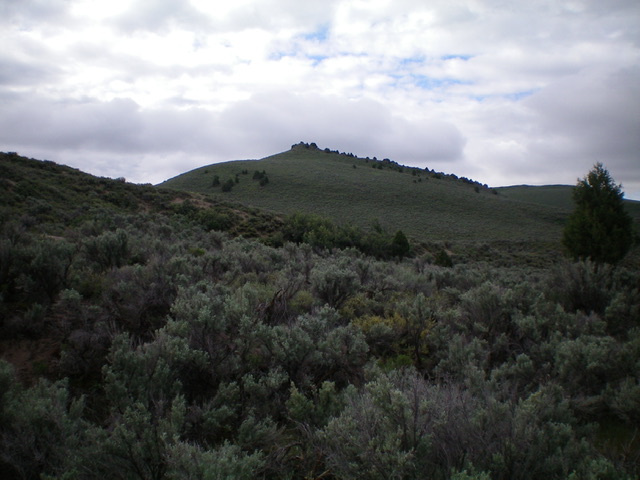 Peak 5821 as viewed from the north. Livingston Douglas Photo

Grassy Ridge Road (unsigned) is reached from Red Road. Red Road is a north-south paved road that is located west of Parker, Idaho. It can be reached from Parker via West 4th North Road or via South Parker Road (500N). Follow either road west to its junction with [signed] Red Road, which is signed as 1900E. From the south, Red Road can be reached on US-20 in North Rexburg (Exit 337). After exiting US-20, turn left/north onto [unsigned] Salem Road (which becomes Red Road). Drive 6.1 miles north on Salem/Red Road to its signed junction with 500N.

At 4.2 miles, reach an unsigned road junction at 4.2 miles with a southbound jeep road with a “Camping Regulations” sign near its base. Park at this junction (5,413 feet on the map) or drive a short distance south on the rutted dirt road (which may be impassable due to mud holes and ruts) a short distance to an open camping area and park there. This route uses ATV trails to some extent. However, many of the ATV trails in this area are NOT shown on the USGS topo map.

From the unsigned road junction, follow the ATV trail left/southeast for about a mile to get just past a series of sand dunes on the right/south side of the trail. Leave the ATV trail and bushwhack south on the east side of the large sand dunes through thick sagebrush. Skirt the right/west side of Point 5592 and cross a dry gully to reach the base of the north face of [obvious] Peak 5821. Scramble south up the sandy, sagebrush-covered face to reach the summit boulders and the top of Peak 5821. This section crosses a short section of private land but there is no fencing or signage to prohibit entry. To avoid any private land, you can scramble up the northwest face to intersect the west ridge and follow it to the rocky summit. The summit has no summit cairn. 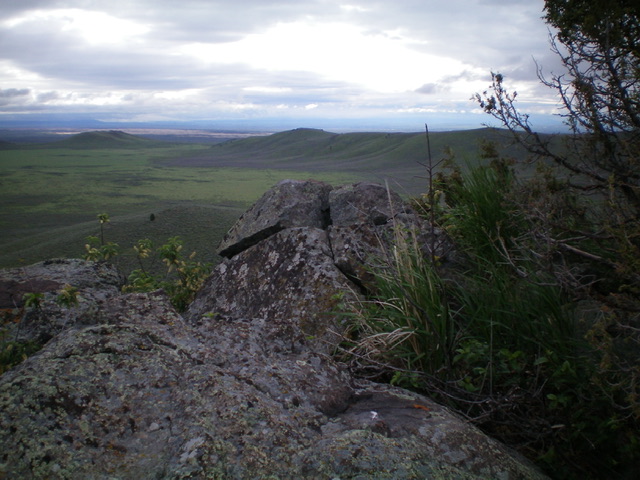 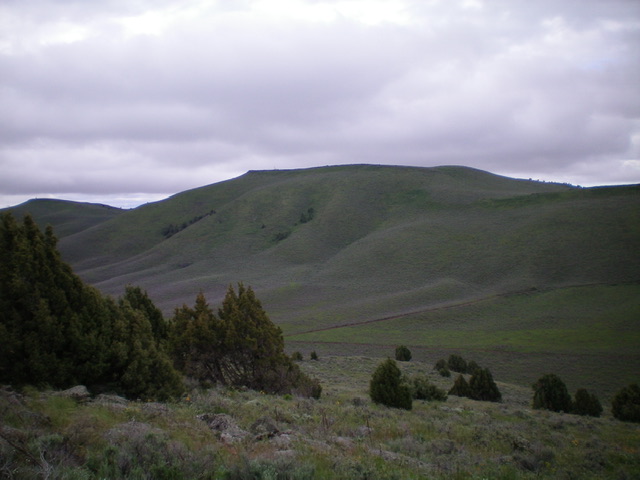 South Junipers HP as viewed from the summit of Peak 5821. Livingston Douglas Photo