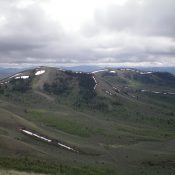 Peak 6840 is located about three miles due south of Rattlesnake Peak (5,915 feet) but is much higher than its northern neighbor. This peak sits on the Bannock County/Oneida County line and is on the northern reaches of the LONG north ridge of Elkhorn Mountain. Peak 6840 is a somewhat hard-to-reach scrub hill with a patchwork of private land near it to make navigation critical here. The terrain here is a mish-mash of points, gullies, and ridges. The easiest ascent route is from the south via FSR-044 and FST-369 (an ATV trail) with a short scramble to the top. USGS Wakley Peak 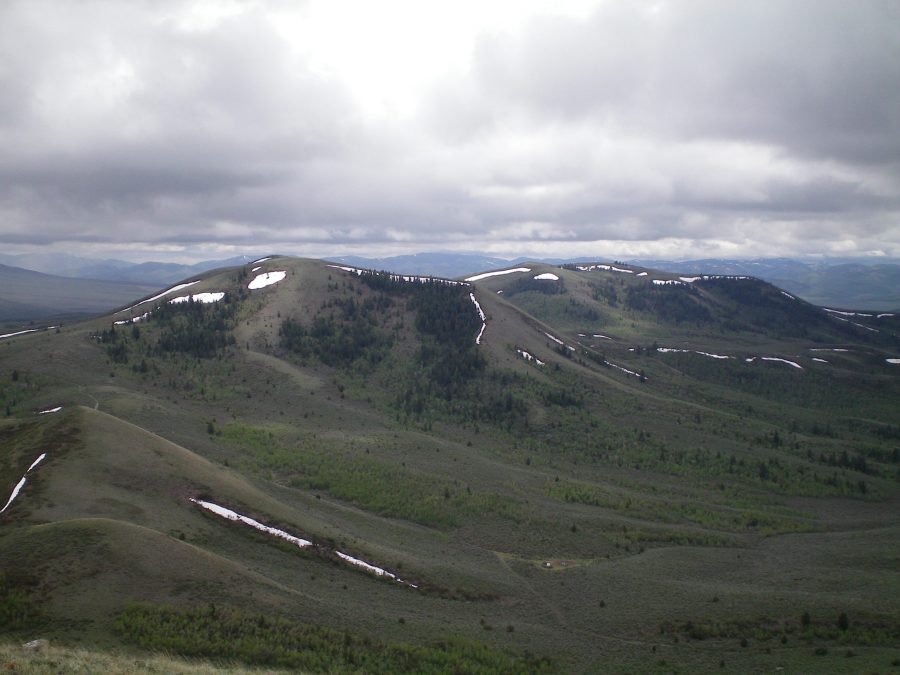 Peak 6840 as viewed from the summit of Peak 6910. The left hump is the high point. Livingston Douglas Photo

From the Arimo/Robin Exit on I-15 (Exit 40), drive west on Arimo Road past the hamlet of Robin, ID. At 8.4 miles (about a mile past Garden Creek Gap), go left onto Harrington Road. At 9.7 miles, reach a “T” junction with Hawkins Road. Go left here and drive 4.2 miles to a junction with [signed] South Hawkins Road/FSR-039. Turn right/south onto FSR-039. At 0.5 mile, enter the Caribou National Forest. At 1.4 miles, there is a gated road closure (“Private Property/No Trespassing”). Park here (5,250 feet).

The private land behind the gate closure is quite small and narrow. It can easily be avoided. The entire climb of Peak 6840 can be done on National Forest Land. The ambiguous nature of the terrain here is the REAL problem. Study the USGS topo map closely. The north ridge has lots of twists, turns, humps, and saddles.

From FSR-039, scramble southeast then south up a ridge on the east side of the Hawkins Creek drainage to a flat ridge area just east of Point 6326. Scramble west briefly through sagebrush then descend south to a saddle and pick up an old jeep track. Follow the jeep track south to a saddle and a “T” junction with FSR-044. This saddle is just north of Point 6457. Hike south up the narrow, somewhat muddy FSR-044 past the left/west side of Point 6457, Point 6465, and Point 6438 to reach a final saddle northeast of Peak 6840 on the Bannock/Oneida County line. Leave the jeep road here and bushwhack south-southwest then southwest to reach the summit of Peak 6840. The summit of Peak 6840 is a wide-open hump of short scrub. The high point sports a tall cairn. 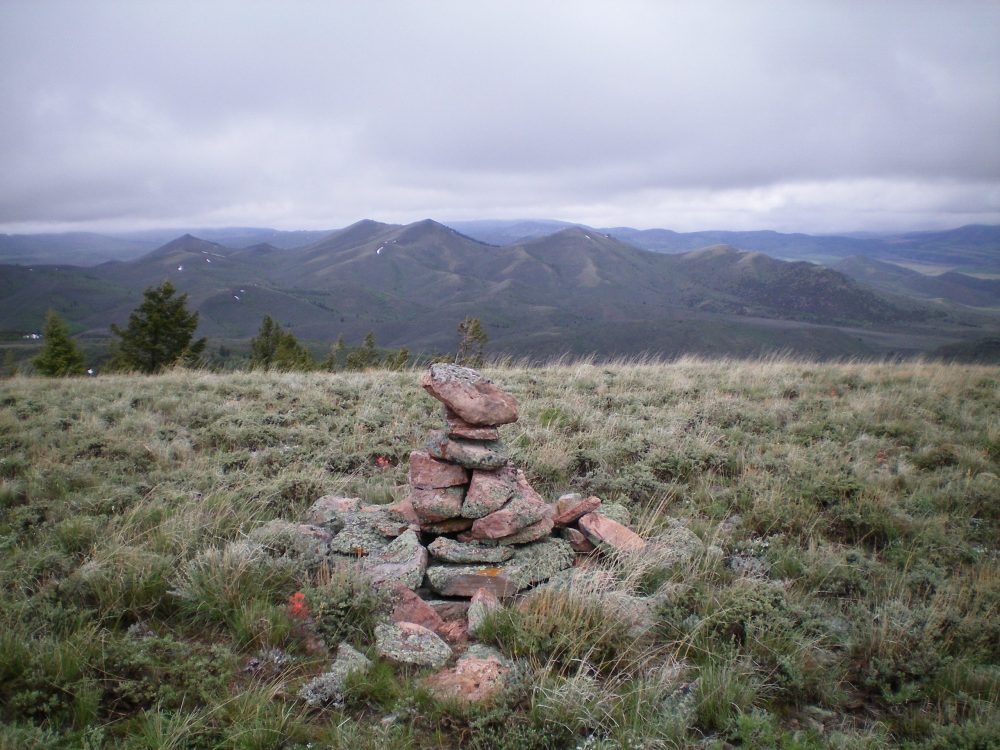 The summit cairn atop Peak 6840 with Peak 6910 in the distance. The left hump is the high point. Livingston Douglas Photo

This route is part of a ridge traverse from Peak 6840 to Peak 6910. This ridge traverse takes almost three hours and is punishing due to some difficult bushwhacking. You must cross three separate drainages to reach the base of the south ridge of Peak 6910. From the summit of Peak 6840, descend west on short scrub to an old 2-track jeep road which heads north then west to reach the South Fork of Hawkins Creek at a meadow. This is the base of the north spur and concludes this section of the ridge traverse.