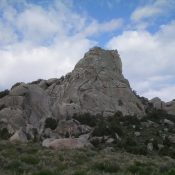 This peak is not in the book. Dave Bingham, the City of Rock’s long time authority and guidebook author, provided the following information. “Peak 6559 is more commonly called Eagle Rock and has at least three 5th-class routes on its west side. I’m guessing the routes described by Livingston have been used as descents for the existing crack routes and access to the top for the one sport route. The property is indeed on private land and recent negotiations with the landowner have gone nowhere.”  Published November 2021

Eagle Rock is a Class 5 spire located in the City of Rocks directly southeast of the magnificent Twin Sisters. It is entirely on private land so please obtain access from the landowner before undertaking this climb. The actual high point of the Peak 6559 massif is a difficult spire/block to the east of the hump labeled as Peak 6559 on the USGS topo map. The west summit hump measures at only 6,521-6,525 feet (based on my altimeter measurements). Visually, the east summit (Eagle Rock) is a good 30-35 vertical feet higher. USGS Almo 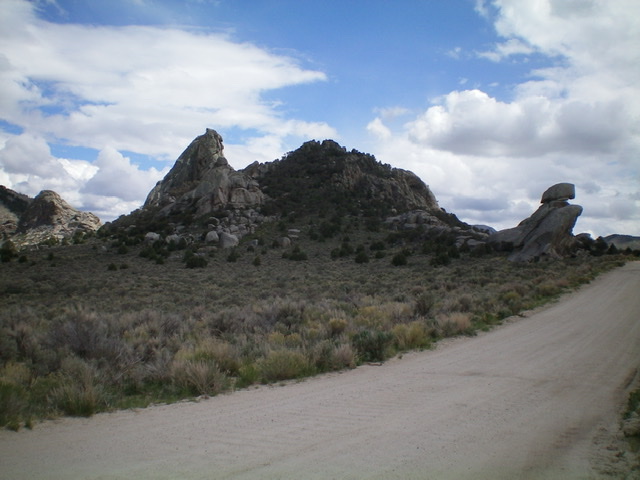 Peak 6559 as viewed from the northwest along Twin Sisters Road. The pinnacle (at left) is clearly higher than the forest-and-rock hump (dead center). Livingston Douglas Photo

From the parking pullout, walk south on Twin Sisters Road to the entrance to the Group Campground, which is on the left/east side of the road. Walk along the road into the Group Campground and quickly find an unsigned 2-track heading right-ish/south. Follow this 2-track road as it skirts the west side then the south side of Peak 6559 and merges into the old California Trail. The California Trail heads northeast then north up over a notch (Pinnacle Pass on the City of Rocks map) just east of the Peak 6559 massif. The trail then drops north-northeast into a broad sagebrush gully. The California Trail provides access to the east side of the Class 5 block/tower that is the actual high point of the Peak 6559 massif.

To climb the easier, [lower] west summit hump, leave the 2-track when it reaches the south side of the west summit. Bushwhack north up through a thick juniper forest with large ground boulders higher up. Scramble up a Class 3 section of massive blocks/boulders to reach the small summit perch. There was no sign of previous ascent. The summit offers magnificent views of the Twin Sisters to the northwest and the [higher] rocky block/spire to its east. 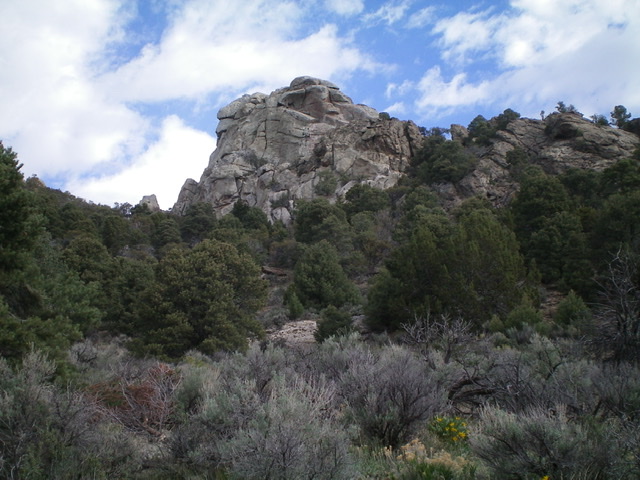 Eagle Rock as viewed from the south. Livingston Douglas Photo 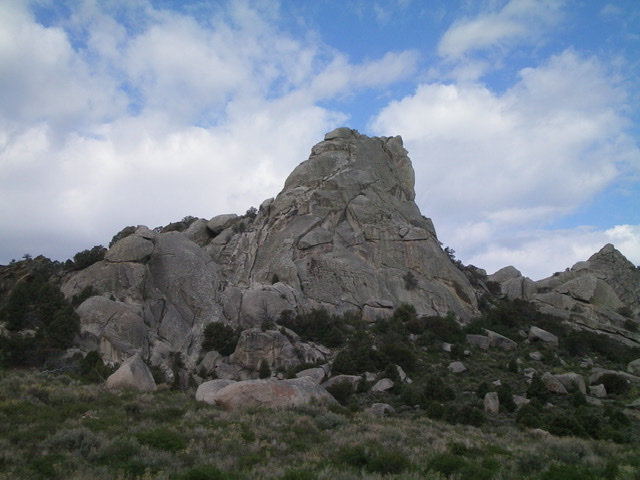 Eagle Rock as viewed from the east. Livingston Douglas Photo