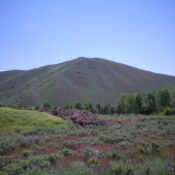 Peak 6702 is a ranked summit that is located on the south side of Ohio Gulch near ID-75 north of Hailey. The north shoulder is a short, steep climb from Ohio Gulch Road and is entirely on public land. USGS Hailey 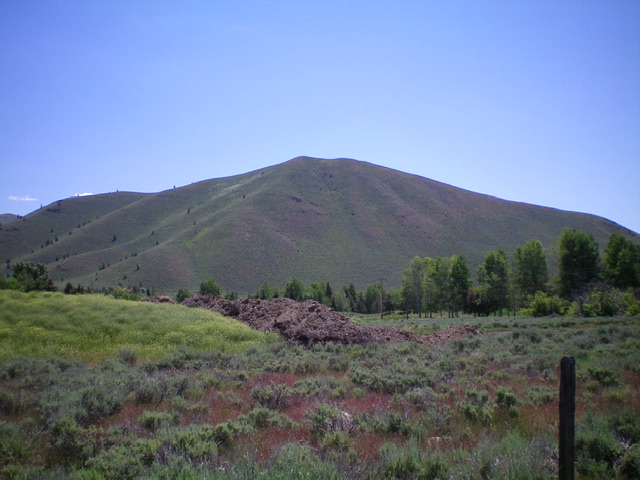 Peak 6702 as viewed from the west. Livingston Douglas Photo

From ID-75 north of Hailey, turn right/east onto [signed] Ohio Gulch Road and drive 1.2 miles up the paved road to an unsigned 2-track side road that is located soon after passing a gravel pit operation. Drive about 50 yards right/south up the side road and park (5,759 feet). There is an informal shooting range here that seems to see a lot of activity. GPS coordinates: 43⁰35’20”N, 114⁰19’04”W.

From the parking area on the side road, scramble south-southeast straight up the sagebrush shoulder. It is steep and thick with vegetation early on. Avoid side gullies that are thicker with vegetation as you climb higher. There is a lot of underlying loose scree and slippery field grass on this route, which makes the descent a particularly treacherous endeavor. The sagebrush gets easier higher up but still requires some weaving to make progress. When you approach Point 6591 (which sits at the top of the shoulder), the ridge bends right-ish/southeast. You can either climb Point 6591 or skirt its right/west side to reach the ridge saddle between Point 6591 and Peak 6702. From the 6,540-foot ridge saddle, continue south up the ridge through more sagebrush to reach the summit of Peak 6702. The summit has a small cairn.

The sagebrush-covered summit hump of Peak 6702 as viewed from the north. Livingston Douglas Photo 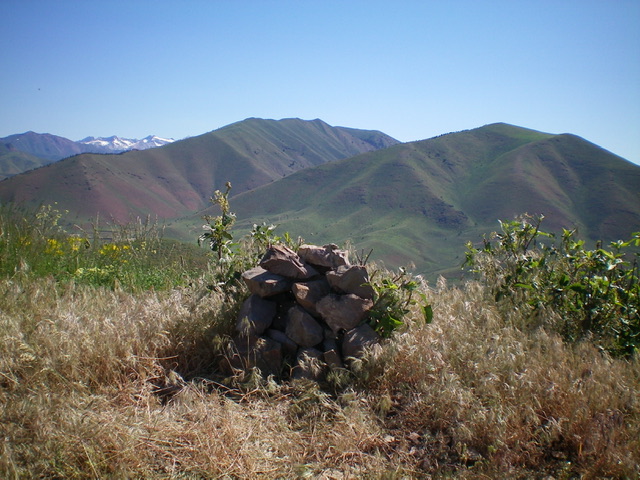 The newly-built summit cairn atop Peak 6702 with Ohio Benchmark (left) and Peak 8345 (right) in the distance. Livingston Douglas Photo