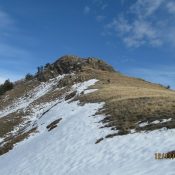 This peak is not in the book. Russ Durrant wrote the initial entry for this peak. Livingston Douglas added the new routes set out down the page. Updated November 2022

This steep climb out of Cub River Canyon in Franklin County offers a satisfying challenge for novice to experienced climbers. Nearby peaks in the Self Help drainage offer a muti-peak challenge for strong climbers. Bereft of the requisite 300-foot prominence, but providing a brisk 1,800+ foot climb in just under two miles, this peak is ignored by climbers who are unfamiliar with this attractive area in the Bear River Range. USGS Mapleton 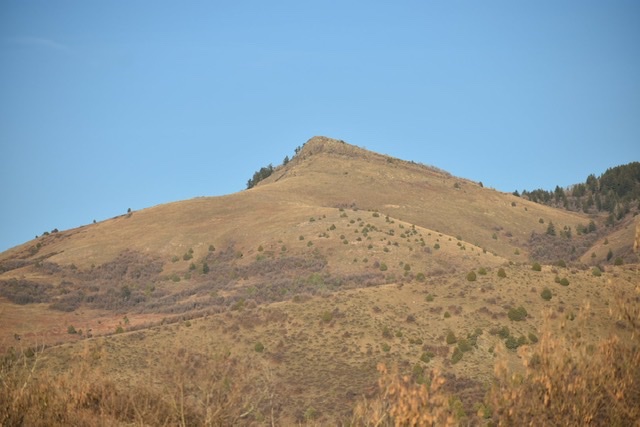 The generally excellent trail climbs south abruptly and steeply up and south along the western flank of the ridge and rises steadily up onto the mid-level flats or benches that are a common feature of eastern Cache Valley. After about a mile, the trail emerges from the shadow of the high ridge it has been flanking and the terrain flattens as you enter the bench land between Cub River and Foster Creek.

These relatively flat, rocky benches are the remnant of the Provolevel beaches of ancient Lake Bonneville and form a unique and highly visible transition between the lower foothills of the Bear River and Wasatch Range and the higher peaks. The bench lands offer mostly open terrain interspersed with lines of Utah maple, conifer, and quaking aspen trees. In these open areas, the views of the valley below and the surrounding mountains from this elevation become very pleasing. The area is also heavily used as a grazing area for cattle.

At approximately a mile, several large cairns sit at the gate of a broken-down fence line. The cairns likely were placed by family and friends of a young man who died a few years ago in the canyon below. There is a memorial on the summit of Self Help dedicated to the young man. From the cairns, it is possible to head directly east to the summit but I chose to follow the trail beyond this point to get clear of several dense looking lines of trees and brush that blocked the way.

About a third of a mile past the cairns, the trail begins to curve eastward around the intermittent groves of Utah maple and brush. If you look east, you see the rocky crown of Self Help Peak appearing high above the bare hill. Choose your route from this point up the steep, bare hillside to the summit. Three peaks form the small but beautiful Self Help Hollow. Self Help Peak itself forms the rock-capped northern slopes of Self Help Hollow. Two small, attractive, unnamed peaks form the back (eastern) and southern walls of this beautiful enclosure.

The summit is a jumbled mass of broken blocks. More adventurous climbers can take on the western to southern aspects of the face. The more moderate route is to move east under and around the broken rock to gain the summit from the south-to-east. Round trip distance is 2.15 miles. 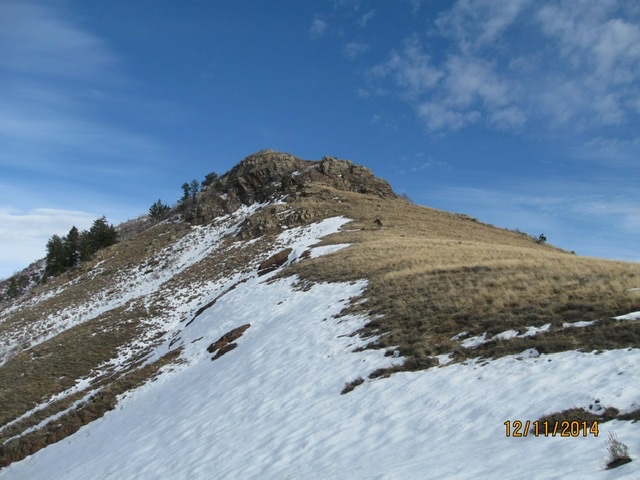 Memorial to a young man who died in the canyon below (football helmet, plaque, and a plastic jar filled with messages from family and friends) sits at the west edge of the summit. Russ Durrant Photo. 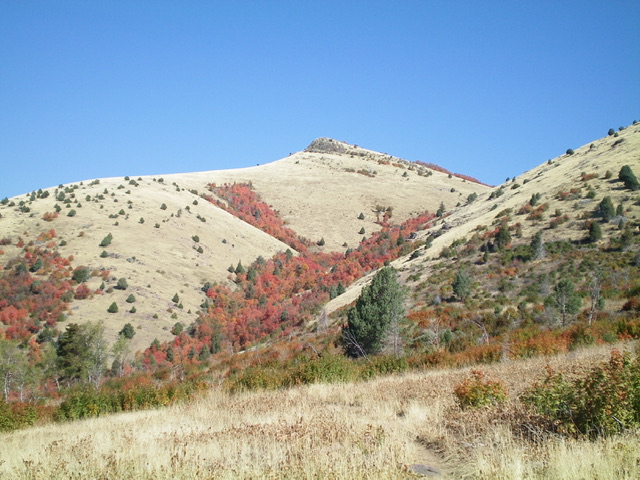 Self Help Peak (dead center) as viewed from the south. Its beautiful south ridge is the skyline left of center. Livingston Douglas Photo

From the road junction at the south end of Preston (at the Stokes Grocery Store), drive south on US-91 for 4.2 miles to a signed junction with Cub River Road. Reset your odometer and go left/east on Cub River Road/FSR-406. At 8.6 miles, reach the Cache National Forest boundary. At 9.1 miles, reach the entrance to the Albert Moser Campground. At 9.2 miles, reach a large pullout/parking area. Park here (5,260 feet).

The USGS topo map shows two trails in the Litz Creek area that no longer exist. The trail junction at 6,056 feet (map) is unsigned but has flagging tape on the nearby field grass/scrub. This junction is critical and should be signed since it is the junction for FST-108 and FST-315. Make the wrong turn here and you won’t return to the Albert Moser Campground.

From the parking area, walk southwest on Cub River Road for 0.1 miles to the campground entrance. Walk through the campground to Campsite #9 and the turnaround at the upper end of the campground. The [signed] trailhead for FST-108 is on the right/east side of Campsite #9.

Hike along FST-108 as it heads briefly northeast then turns sharply right/south to climb steeply up through a thick forest. After about 0.3 miles, the trail emerges from the forest into an open area with a steep, grassy slope on the left/east side of the trail. Leave the trail here and scramble up this easy grassy slope (with scattered boulders) to reach the crest of the open north spur of the west ridge. This spur is a joy to climb as it is a combination of easy grass and broken rock. There is even an on-and-off ridge trail to assist you. The climb to the summit is in completely open terrain, unlike most routes on this peak.

Scramble south up the magnificent spur to reach its junction with the [obvious] west ridge. The summit of Self Help Peak is the rocky outcrop off to the left. The west ridge is broader and has more scrub than the north spur. Follow the west ridge directly up to the summit rocks (Class 2+). Work through the large boulders and brush to reach the small, grassy summit of Self Help Peak. There is a memoriam nearby on a lower boulder (football helmet and plaque). I rebuilt the summit cairn and placed it atop the highest boulder. 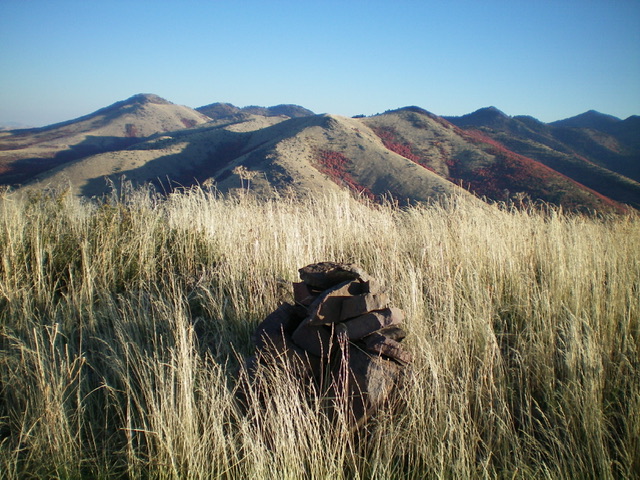 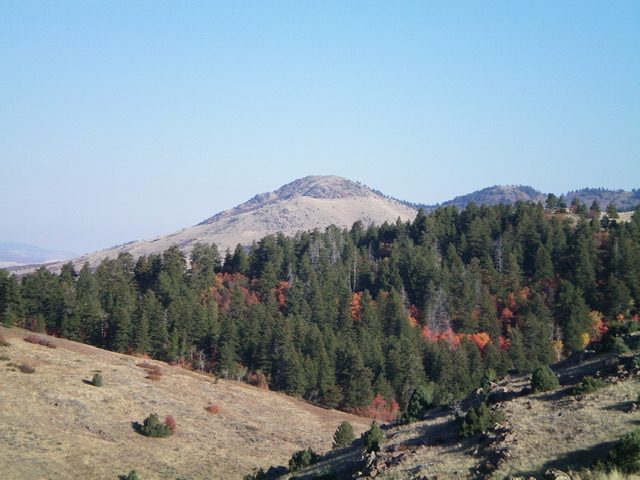 Self Help Peak (hump in dead center) as viewed from the southeast. Livingston Douglas Photo

From the summit, descend east to a saddle at the head of Self Help Hollow, staying in open scrub right/south of a brushy, forested area. Hike in open terrain which comes out just below the saddle for the easiest going. From the saddle, bushwhack southeast into a pine/aspen forest that gets pretty thick. Find a dry gully with a cattle trail in it to work through this densely-forested area to reach a forested saddle that is northeast of Point 6992. Move right/south and upward to avoid the impossibly-thick forest and brush in the saddle. You will quickly reach an open shoulder. Follow this shoulder east (staying right/south of thick forest and brush) down to a 6,700-foot saddle that sits at the base of the north ridge of Peak 6990. This is the low saddle between Self Help Peak and Peak 6990. It concludes the first leg of a 3-peak adventure. Peak 6990 is up next.