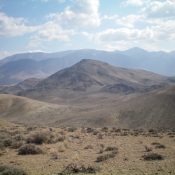 Peak 7030 is located on the west side of Grand View Canyon along US-93 south of Challis. USGS Antelope Flat 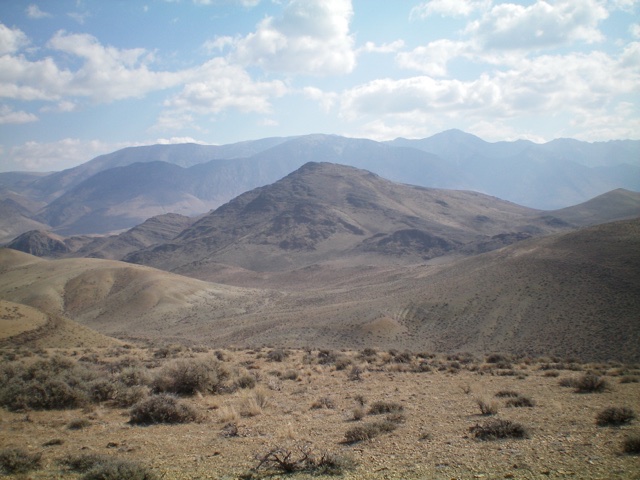 Peak 7030 (dead center, mid-ground) as viewed from the west. The west ridge (my descent route) is coming at the camera. Livingston Douglas Photo

From the parking pullout, cross to the west side of US-93. Private property extends south almost to the rocky mouth of Grand View Canyon. Stay just south of a fence row and scramble up through a rocky, narrow gap to access the north ridge of Peak 7030. Climb south up the rocky ridge crest, staying right/west of any rocky outcrops that present problems. Skirt the base of the highest outcrop on its right/west side to reach the 6,700-foot saddle just east of the summit. From the saddle, bushwhack west then northwest up a ridge (of sorts) with a few minor rocky bumps/outcrops along the way. The terrain is mostly short scrub, broken rock, and scree. The summit is at the very northern tip of the summit cap. It has a large summit cairn. 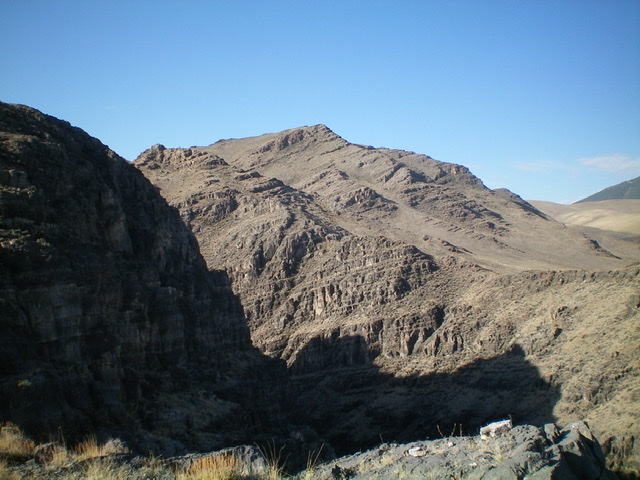 Peak 7030 (summit is in dead center) as viewed from the summit of Peak 6435 to the north and across Grand View Canyon. The north ridge (my ascent route) is in mid-ground and heads diagonally up and left. Higher up, the ascent route turns right and follows the skyline ridge to the summit. Livingston Douglas Photo 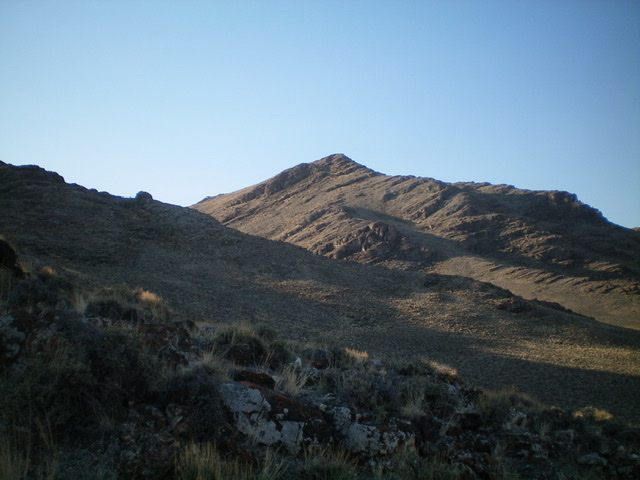 Peak 7030 (dead center) as viewed from midway up the north ridge. The north ridge is on the far left of the photo. Livingston Douglas Photo 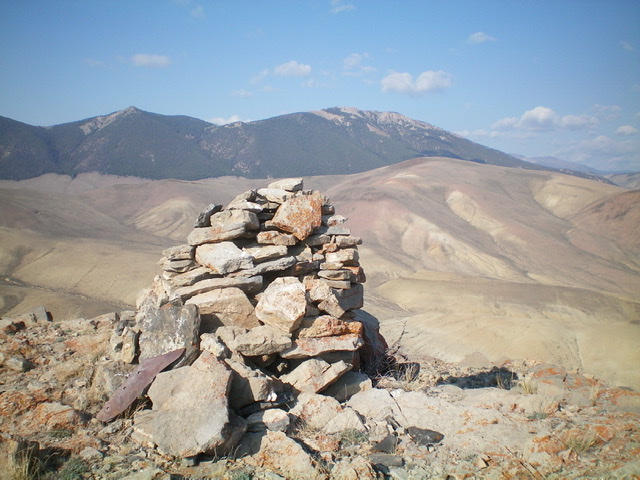 The large summit cairn atop Peak 7030. Peak 7459 is in mid-ground just to the right of the cairn. Livingston Douglas Photo

From the summit, descend west on a ridge that becomes a face. The terrain high up is short scrub and loose shale. Aim for an obvious rocky outcrop on the west ridge/face. Leave the ridge crest at the small saddle that precedes that outcrop and descend left/southwest on easy scrub to a dry gully. Follow the gully southwest then right/northwest to reach a north-to-south gully. The terrain to this point is short scrub and goes quickly. Not much loose rock to contend with.

Go west up over a minor shoulder to reach a more prominent dry gully that heads northeast and has an old 2-track road in it. Make a note of this gully because it is a critical part of the descent route back to the highway. Follow the old 2-track southwest briefly until it ends. Bushwhack west and drop into a final north-to-south gully to cross it just south of Point 6418. This dry drainage is the low point between Peak 7030 and Peak 7459 and concludes the first leg of today’s 2-peak journey. Peak 7459 is up next.