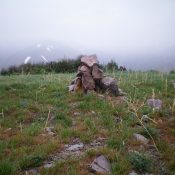 Peak 7058 sits just west of Inman Pass. It is overshadowed by South Putnam Mountain (8,949 feet) and its long south ridge, which extends all the way to Inman Pass. Nevertheless, Peak 7058 makes for a nice, open ridge scramble from the National Forest Boundary at Inman Road. The easiest ascent route is the south face from the upper reaches of Inman Road. Peak 7058 makes for a good early- or late-season scramble. USGS Bonneville Peak 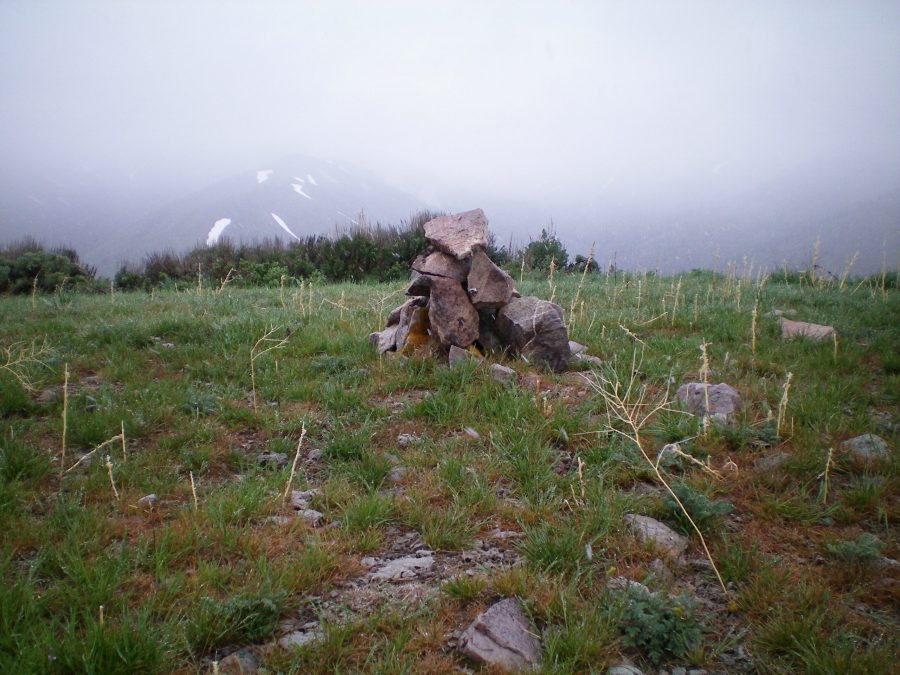 The newly-built summit cairn atop Peak 7058, on a cold, rainy morning in mid-May. Livingston Douglas Photo

From the National Forest boundary on Inman Road/FSR-018, scramble northwest up a steep scrub hill to reach a cattle fence. Follow the right/east side of the fence up to Point 6124 on the west ridge of Peak 7058. Scramble east then east-northeast up the undulating west ridge on easy, open scrub to reach the gentle summit. The summit showed no signs of previous ascent so I built a respectable cairn on the high point.

To add some spice to your hike, descend the south ridge all the way to Inman Road. From the summit, descend the obvious ridge south-southeast on easy, short scrub. The terrain difficulty increases as it becomes thicker, taller scrub/sage and has bushes and willows mixed in. Fortunately, you can weave through the scrub, but you won’t get any help from game trails. The ridge bends right/south then right again (this time southwest) to reach an overlook about 250 vertical feet above Inman Road.

The final 200 vertical feet of descent heads due south and is VERY STEEP. The terrain is a mix of loose gravel, talus, scrub, and bushes. You will be using your hands to brake yourself in this section so I rate it a Class 3. After you reach the road, follow it west down Inman Creek to return to the Caribou National Forest Boundary and your parked vehicle.