Peak 7313 is a soft-ranked summit with 293 feet of prominence. It is tucked behind a ridge that includes Flag Knoll. Consequently, it is not visible from Skyline Road. The peak is half-forest and half-sagebrush/brush. Choose your poison. I prefer the sagebrush malady. USGS Castle Rock 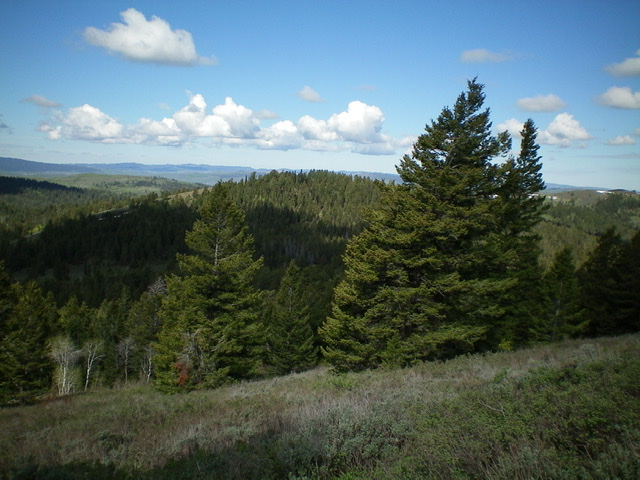 Elusive, forested Peak 7313 (dead center) as viewed from the southwest ridge of Flag Knoll to its east. Livingston Douglas Photo

Same as for Flag Knoll. This is the third leg of a three-peak journey that begins on Skyline Road.

From the ATV trail at the base of the southeast face, bushwhack west through a short patch of thick pine forest to reach the open sagebrush of the southwest face at the forest’s edge. Follow the rounded “ridge” northwest up through the brush using gaps and game trails to help expedite your ascent to the open summit of Peak 7313. The summit is a ridge line summit and is thickly covered with sagebrush. I built a decent summit cairn atop a minor rocky outcrop that seemed to be the high point. Retrace your route back to the ATV trail alongside the South Fork drainage to return to Flag Knoll and Skyline Road. 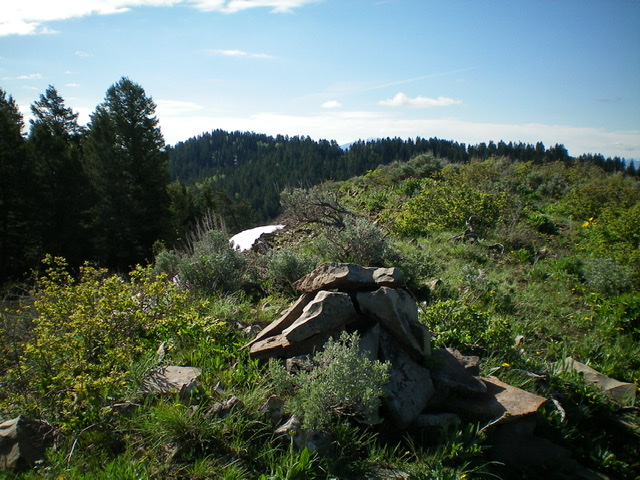 The brushy summit of Peak 7313 with Peak 7428 in the background (forested, left of center). Livingston Douglas Photo

The Return to Flag Knoll, Class 2

This is the final leg of a journey that begins and ends with Flag Knoll (7,709 feet). From the base of the southeast face of Peak 7313, follow the ATV trail to the head of the South Fork drainage. From there, bushwhack east then northeast up through a thick pine forest then thick sagebrush to reach the northwest ridge of Point 7526. Scramble southeast to the top of Point 7526 then climb northeast along the ridge line to the top of Flag Knoll and return to Skyline Road.