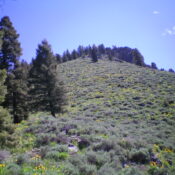 Peak 7376 is a rugged, rocky summit that towers over Little Smoky Creek in the Soldier Mountains. The easiest ascent route is via the east ridge from FSR-094 near Worswick Hot Springs. The shortest, steepest ascent routes are on its west side. Peak 7376 is a seldom-visited summit. USGS Sydney Butte 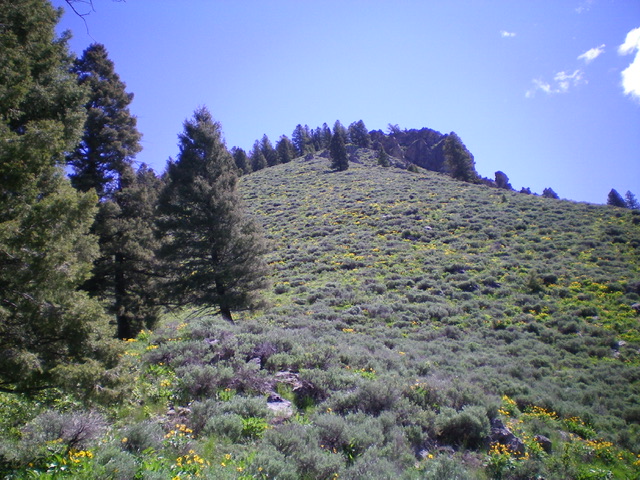 Looking up the upper southwest shoulder of Peak 7376. The summit sits behind (and above) the rocky block just right of center. Livingston Douglas Photo

The southwest shoulder is the ridge on the left/north side of the gully. From the parking pullout, cross to the east side of FSR-227 and bushwhack briefly east into the dry gully then scramble diagonally left/north up a very steep slope of sagebrush, loose rock, and boulders to reach the crest of the southwest shoulder (Class 2+). This is the steepest part of the climb. Once on the ridge crest, scramble northeast then east up through a mix of sagebrush, other brush, and willows in combination with rocky ridge outcrops to reach flatter terrain higher up. Either climb over or skirt the right side of the rocky ridge outcrops. Higher up, the terrain is mostly sagebrush. As you near the summit, climb up through a mix of scree and boulders to skirt the left/north side of a summit headwall to reach the gentle summit area. There were no signs of previous ascent so I built a small cairn atop the rocky summit high point. 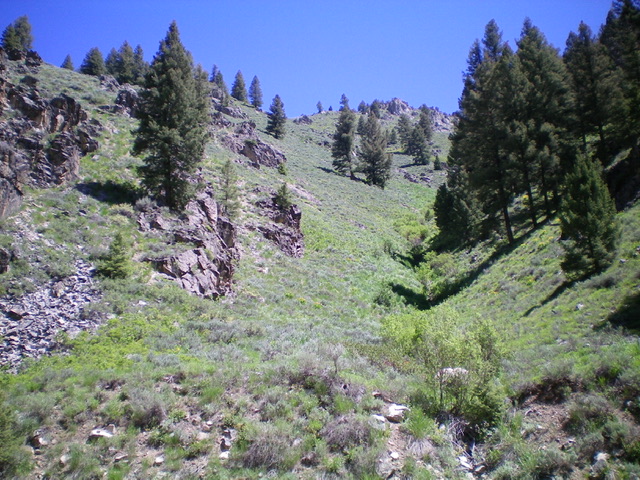 Looking up the steep, narrow gully from FSR-227 (start of climb). The summit of Peak 7376 is just behind the rocky block in dead center. The southwest shoulder ascent route climbs the left skyline directly to the top. Livingston Douglas Photo 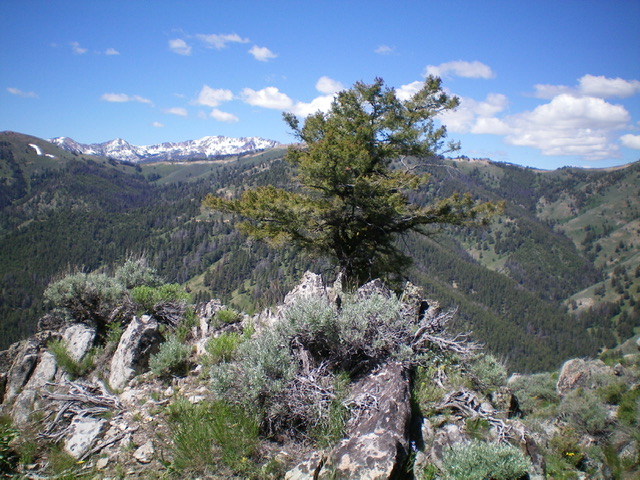 The west ridge is the ridge on the right/south side of the gullywhen viewed from the road. From the southwest shoulder, the west ridge is forested and looks relatively easy. In actuality, it is hard to find and even more difficult to stay on. From the summit, bash southeast through thick brush and some rocky outcrops to a minor saddle. Continue south over a ridge hump to reach an elongated, flat ridge area. From here, descend southwest then west on a forested, rocky ridge of sorts. You must angle right/north to get on the correct ridge because there are multiple small ridges in this area. Descend steep, loose pine duff and gravel (with ample brush mixed in) and find some diagonal game trails in the pine forest to help expedite the descent. The final descent to the mouth of the gully is very steep (Class 2+). I much preferred the southwest shoulder ascent route to the west ridge descent route. The east ridge is probably a better route than either of my chosen routes.