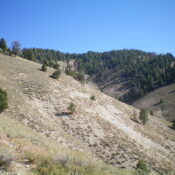 Peak 7620 separates Joes Gulch from Elkhorn Creek in the Eastern Salmon River Mountains just north of ID-75 and east of Lower Stanley. It barely exceeds the elevation of a few nearby ridge points of similar height in a heavily forested area. Peak 7620 is most easily climbed from Joes Gulch to its west. USGS Basin Butte 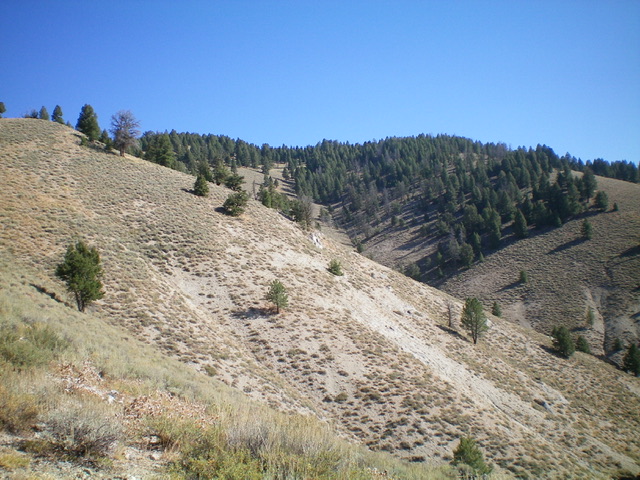 Peak 7620 as viewed from low on the south ridge. The summit is in the forest in dead center. Livingston Douglas Photo

From the roadside pullout, either hike (or drive) about ¾ mile up the narrow 2-track that is Joes Gulch Road to reach a sharp left turn in the road at the base of the [obvious] south ridge. The road passes two narrow gullies on its right side just before reaching the toe of the south ridge. Leave the road and scramble steeply north up the open scrub ridge. Initially, the ridge is mostly gapped sagebrush with some loose scree/gravel underneath. Higher up, the ridge bends right-ish/north-northeast then bends right-ish/northeast to reach the flat, narrow, forested summit area of Peak 7620.

The ridge terrain changes from a mix of open scrub and scattered pines to semi-open pine forest with underlying scrub (a bit annoying and thick at times). The high point of Peak 7620 is at the northeast end of the flattish, elongated summit area. The USGS topo map shows the high point at the southwest end. Stand on both points just to be sure. I built a summit cairn on the [higher] northeast point. When descending from Peak 7620, be careful to bend left-ish/south after initially heading southwest from the summit. Visibility is limited due to the thick pine forest high up. Lower down, the ridge gains definition and the terrain opens up. It makes for a pretty fast descent to the road. There were no signs of previous ascent on the summit. 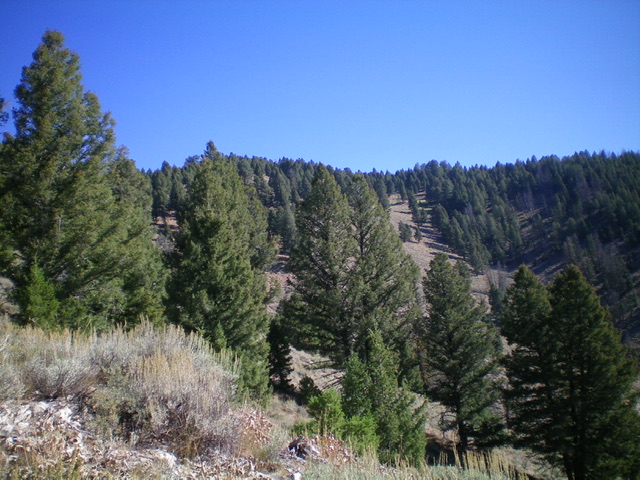 Looking up the pine-and-scrub south ridge of Peak 7620. The ridge is left of center and is my ascent route. Livingston Douglas Photo 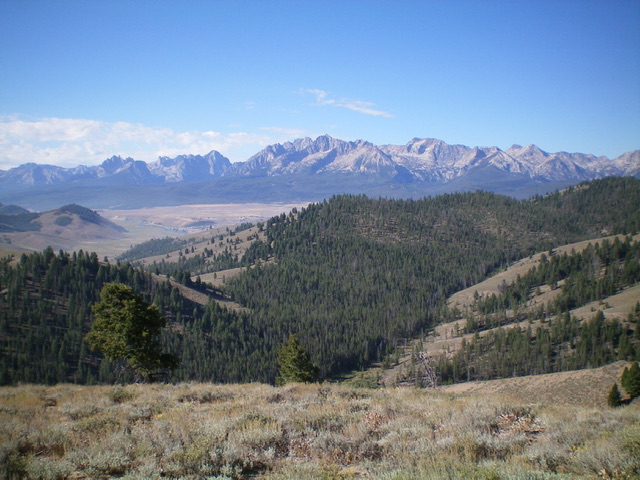 View of the beautiful Sawtooth Range from the south ridge of Peak 7620. Livingston Douglas Photo