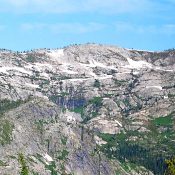 Peak 7623 is the high point of a large ridge that runs south from the main Selway Crags Crest. The peak is one of the taller points in the group and is the tallest point south of Jesse Pass. Peak 7623 rises nearly 6,000 feet over the lush warm cedar forests of the Selway River in the western end of the extensive Selway-Bitterroot Wilderness and rises about 4,000 feet above the forks of Gedney Creek and Canteen Creek, which the extended ridge divides.

The immediate ridge top rises about 1,300 feet above Cove Lakes on the west and 1,500 feet above Canteen Meadows to the east. The 1.5-mile long ridge has other high points at 7,569 feet and 7,600 feet, which provides a nice, mostly gentle, subalpine hike at or above treeline. The ridge ties into the main trail south of the pass above Cove Lakes on the south and to Jesse Pass on the north, which allows for a nice loop hike with the parallel trail below for those camped at Cove Lakes. USGS Fenn Mountain 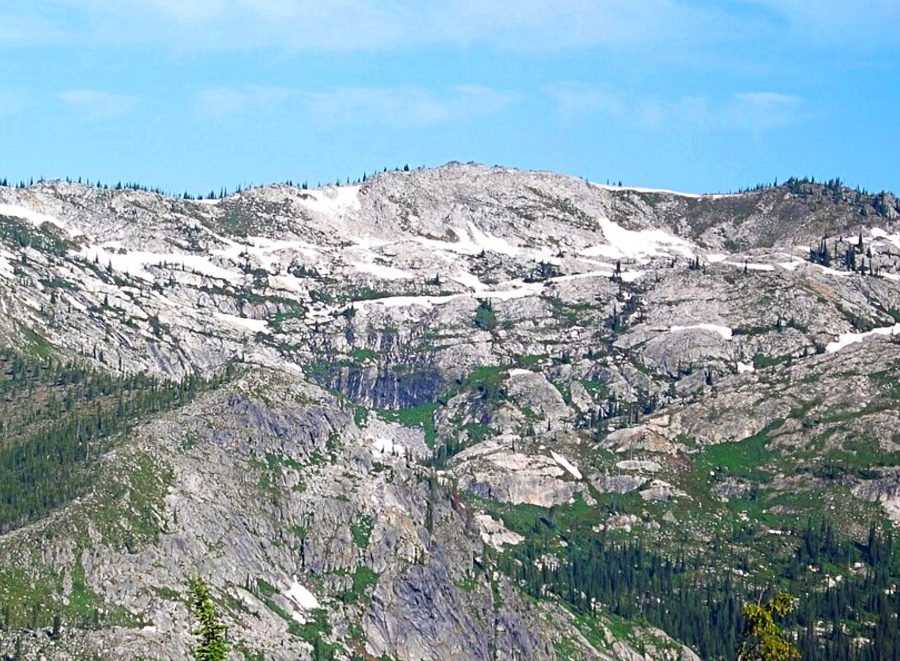 Peak 7623’s summit is formed by jumbled talus blocks on a broad ridge that is easy to traverse. The granite dome forming part of the southern terminus provides a particularly spectacular site from the Big Fog trailhead about 2 miles to the south across the deep canyon of Canteen Creek.

Around the east side of the peak, the slopes become more exposed and rugged with vertical walls and seasonal waterfalls below a bench with more gentle slopes above. The bench has an interesting deep, water-filled gash in the granite. The west side of the ridge is a mix of subalpine forests and talus while the north aspect forms part of a steep and rugged cirque that drops off into the uppermost Three Links Lake. Snow remains on the cooler, sheltered slopes year-round.

The most popular trailhead is at Big Fog Saddle [(E)(3.1.2) on Page 78]. To reach the trailhead, drive approximately 18 miles up the Selway River from US-12 at Lowell almost to Selway Falls. The first several miles are paved but most of the road is gravel. Some places are narrow and traffic can be heavy at times so watch the corners. Just before Selway Falls, take a left onto Fog Mountain Road/FSR-319, which is well-signed. From the Selway River, the trailhead at the road’s end is 13 miles. The first half of FSR-319 is narrow but in fair condition. The second half of the road gets progressively rougher, with large jutted rocks and seasonal streamlets breaking up the surface. A high-clearance vehicle is advised. The 13 mile drive will take over an hour.

From the trailhead, this route goes straight up the ridge and over Big Fog Mountain on FST-343. The trail soon splits: FST-343 goes east and FST-363 continues on the main ridge to the north. Then the trail vanishes on the broad ridge top but forms again as it peels off the east side of the ridge on its way to Legend Lake. This trail is spotty and is often covered by snow. Avoid the temptation to continue far down the east side on the trail. It is best to stay on the ridgeline (or just on the west brim) north.

Continue toward the ridge point (at 7,515 feet) above Legend Lake, then angle down the slope northwest toward the saddle above and south of lower Three Links Lake. Here, the route cuts west across the north perimeter of the Canteen Creek drainage. Stay on the talus south of the ridgeline to avoid the rugged, impassable crags. When you reach the next saddle, above the upper Three Links Lake, head up the ridge to the southwest. The ridgeline is the most direct route. But you can also go more to the southwest and over a small ridge hump to the interesting water-filled gash that highlights a small hanging basin, then straight up the slope to the summit of Peak 7623.

From Cove Lakes, the ridge can be climbed to reach the high point. Travel to the northeast to avoid more steep and dangerous rocks directly above the lakes. The hike from Cove Lakes to the summit of Peak 7623 is less than a mile and ascends approximately 1,300 vertical feet.

Another option to the summit from mosquito-infested Cove Lakes is to continue north on FST-031 for about a mile. From here, continue on to Jesse Pass on an intermittent trace of a trail. Finding the trail to Jesse Pass is difficult and a topo map is recommended. From Jesse Pass, hike up the ridge to the south for a short distance to the high point.