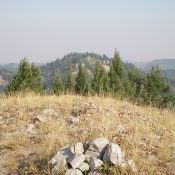 Peak 7669 is located on a long northwest-to-southeast ridgeline that also includes the Twin Peaks to its southeast. It is most easily reached via FST-213 (an ATV trail/road) and a short bushwhack up the thickly-forested north ridge. The summit is semi-open so at least you get partial views from the top. Peak 7669 is best climbed in combination with nearby Twin Peaks West. USGS Temple Peak 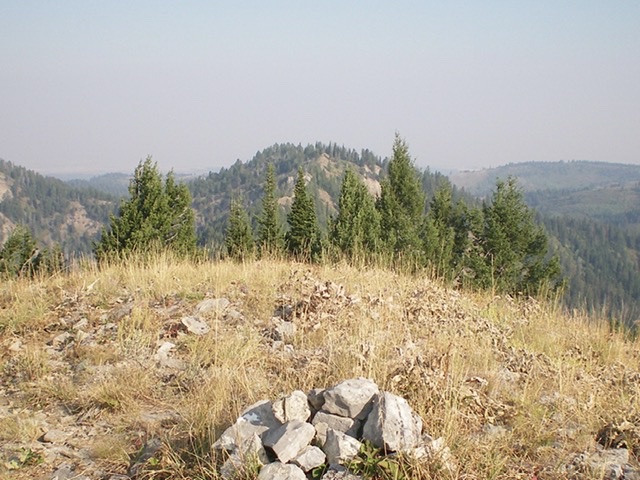 From the Caribou-Targhee National Forest office on US-26 at the north end of Idaho Falls, drive 13.6 miles east on US-26 to a signed junction for the Kelly Canyon ski area. Turn left/north onto a paved road. Reset your odometer here. At 1.9 miles, go right at an unsigned junction. At 3.1 miles, cross the Snake River on a bridge then immediately reach a “T” junction. Go right/east here onto [signed] Heise Road. 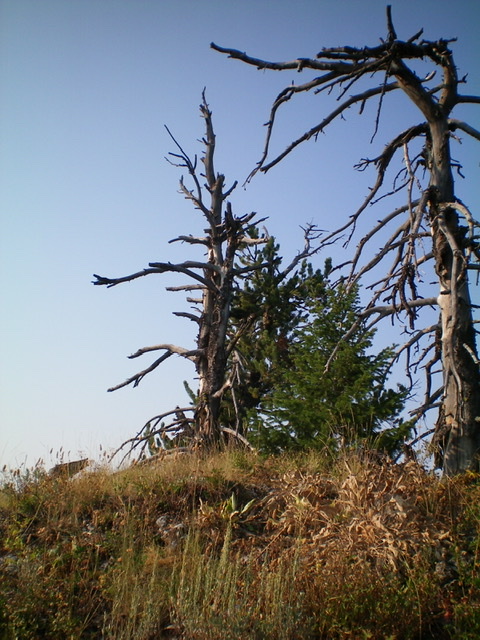 Hike east up FST-213 for 1.3 miles to a saddle at 7,200 feet where the ATV trail/road turns sharply left (as shown on the USGS topo map). Leave FST-213 here and follow a spur road to the right/west (which soon ends) then follow a well-beaten cattle trail west across the head of a drainage. Enter the forest here and follow a weaker cattle trail west then south up through the thick veg in the dense pine forest. There is some blowdown to contend with as well.

The weak trail gets you high up on the north ridge, not too far below the summit. Bushwhack right/west through thick brush to reach the ridge crest summit of Peak 7669. As per the USGS topo map, the high point is at the southeast end of this ridge section. The terrain is semi-open so visuals are decent. This is definitely the high point. There is no summit cairn, just rocky terrain and a few dead trees/snags to congratulate you.

From the summit, descend southeast on the ridge crest on rocky, loose scree to quickly find a use trail on the right/southwest side of the ridge crest. Follow this decent, but overgrown and narrow, footpath all the way down to the 7,340-foot connecting saddle with Twin Peaks West (7,766 feet). This unofficial trail has its ups-and-downs as well as some steep, gravelly sections and some loose rock. While it isn’t perfect, it sure beats bushwhacking in the thick, tall veg and dense forest in this area. Visibility is mixed along the southeast ridge: sometimes semi-open with decent visibility and other times thick with pines/veg and no visibility. This concludes the first leg of today’s two-peak journey. Twin Peaks West (7,766 feet) is up next.