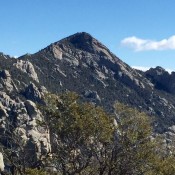 This peak is not in the book. Livingston Douglas provided the route information below. He states “This is a difficult bushwhack (worst mountain mahogany bushwhack I’ve ever done) and a challenging finish. No one told me to bring rock shoes…” Updated November 2021

Granite Peak is an imposing ridgeline summit in the City of Rocks National Reserve. This rugged, granite-encrusted peak is often referred to by locals as Granite Mountain and sometimes as Sleeping Woman Mountain. Although the mountain is part of the City of Rocks National Reserve, private property blocks access from the east. As a result the much shorter/easier approach from Graham Creek Road is not publicly accessible.

Although trees reach nearly to its summit, there is a lot of exposed granite as well as an impressive summit block which a makes the peak an attractive destination. Climbing this peak requires a punishing bushwhack and then a testy Class 4 climb up an exposed summit block. Take this climb seriously and bring your rock shoes. This adventure covers 8.0 miles with 2,650 feet of elevation gain round trip. USGS Almo 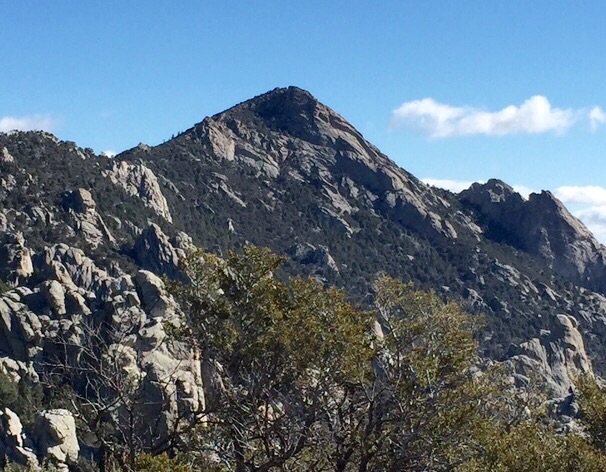 Granite Peak as viewed from the trail to Indian Grove.

The Graham Creek Trail is only a cattle trail now, is no longer maintained, and soon disappears. But it does get you close to Point 7288, a critical navigational mark. Leave the Graham Creek Trail as it turns left/north to descend to Graham Creek. Bushwhack east to skirt the north side of Point 7288. Drop east to a saddle where an old cattle fence that runs from west to east. Scramble east, staying just left of the cattle fence, and quickly reach the crest of an elongated north-south ridge point. This provides your first taste of the dense mountain mahogany in the bushwhack to Granite Peak. Up to now, the terrain has been easy field grass and scrub. The fun is over. The punishment now begins.

The bushwhack along the west ridge of Granite Peak is difficult due to the combination of a thick forest of mountain mahogany, rocky outcrops/towers, brush, and ups-and-downs. Visibility is sketchy due to the thick forest and the ridge definition is dubious in many cases. After passing the north side of Point 7288, dropping east (slightly) and climbing up an elongated north-south ridge point, descend east down an easy field grass-and-scrub slope to reach the “3-tower saddle.” These towers are visible on the USGS topo map and are intimidating when viewed from the ridge crest to the west. Skirt just left/north of the towers in a mix of easy scrub and mountain mahogany. Climb east then southeast from that saddle. The mountain mahogany is so dense here that it is often best to scramble up (and down) the ridge boulders (Class 2+/3 terrain). Unfortunately, the ridge crest itself is often an impossible combination of blocks/boulders, brush, and mountain mahogany with some serious exposure in spots.

Climb southeast up the ridge crest (or just left/north of it) to reach Point 7310. Descend east from Point 7310 in semi-open, gapped scrub to reach another ridge saddle. Bash your way east up a face section to once again reach the ridge crest. This area is some of the thickest mountain mahogany of today’s slugfest. Drop east to another minor saddle then scramble up ridge boulders to a minor, rocky boulder point. From there, begin the final push up the left/north side of the ridge in wicked mountain mahogany on a narrow ridge crest to reach the false summit block/tower. There is a small cairn atop this tower. From here, the true summit block is VERY CLOSE and is about five to ten feet higher.

But there is a narrow notch that separates these two towers. You may be able to descend exposed Class 3 ledges on the right/west side of the false summit block to reach the notch quickly. I chose to descend around the north side of the false summit to reach the chute that leads up to the notch. Unfortunately, having stood atop the false summit, I knew that the summit block would be a Class 5 climb up an almost-sheer face from the notch. But I visited it anyway and planned to call this one a defeat and return back to my truck.

I moved up into the chute that separates the false summit from the true summie and saw a possible entry onto the summit block from a tree in the chute. There is a narrow white-ish ledge that runs up the side of the summit block (see photo). From the tree in the chute, climb up the knobby face about 10-12 feet to reach the base of this ledge. Follow the ledge right/south up the somewhat-exposed west face of the massive summit block until it peters out at a cross-ledge heading left. Climb diagonally left up that short ledge to reach the crest of the massive summit block.

Thankfully, the ridge crest is slightly flatter than the face but the holds are more dubious. A fall here leads down the very exposed north end of the summit block and would most certainly be fatal. And if you’re wearing backpacking boots (as I was), it’s particularly worrisome. Sure wish I had brought my rock shoes, but I had no beta indicating a Class 4-5 summit block on Granite Peak. Once on the ridge crest of the summit block, climb right/west up the center of the block to reach the final summit block. That block is a Class 5 face climb if attacked directly. Foiled again.

Go around the left/south side of the block to find ledges that lead around to a chute that heads right-ish and is an easy, Class 2+ scramble to the summit perch. The top of this massive summit block has a small cairn. The false summit isn’t far away but it takes a lot of work to reach the true summit of Granite Peak. Descending the steep, exposed summit block to return to the white-ish narrow ledge is treacherous in backpacking boots. Trust me. Friction-gripping and butt-sliding was necessary. I was most happy to be back down in the narrow chute and on Class 2+/3 terrain with no exposure. 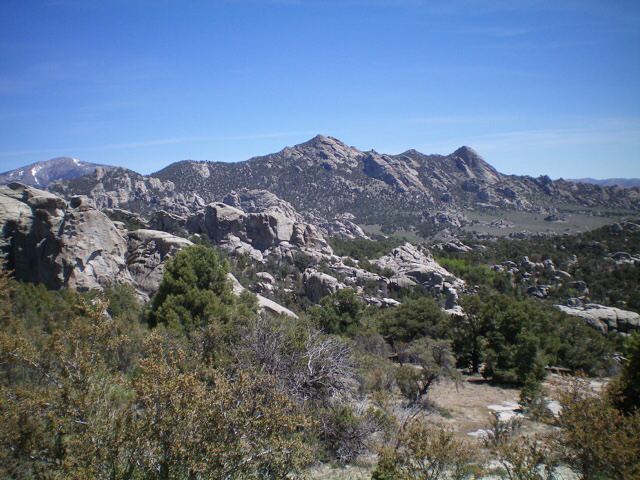 Granite Peak (in center in distance) as viewed from the City of Rocks Road to its southwest. The “inner city” lies in between. Livingston Douglas Photo 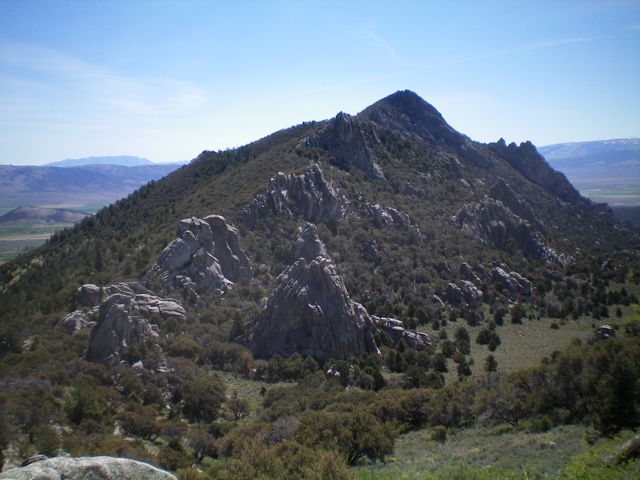 The west ridge of Granite Peak. Notice the “3 towers saddle” just below and to the left. The summit is the rocky hump right of center. Look closely and notice the cleft in the summit. It separates the [easy-to-reach] false summit from the true summit. The west ridge is an endless sea of rocky outcrops and mountain mahogany. Simply brutal. Livingston Douglas Photo 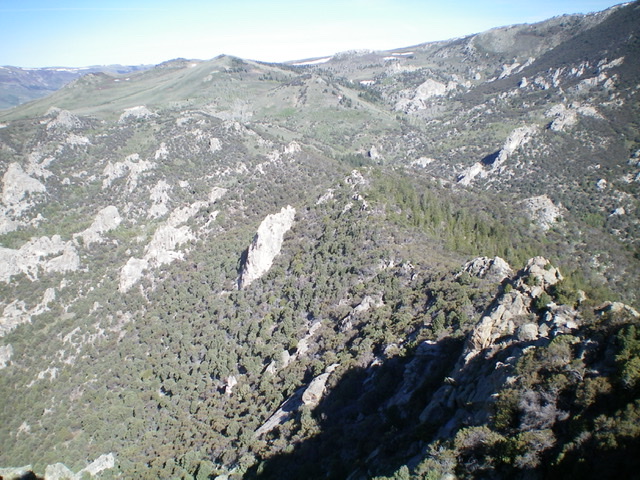 Looking back down the west ridge from the summit notch. The meandering, up-and-down ridge is ill-defined and is punishing, as you can see. Livingston Douglas Photo 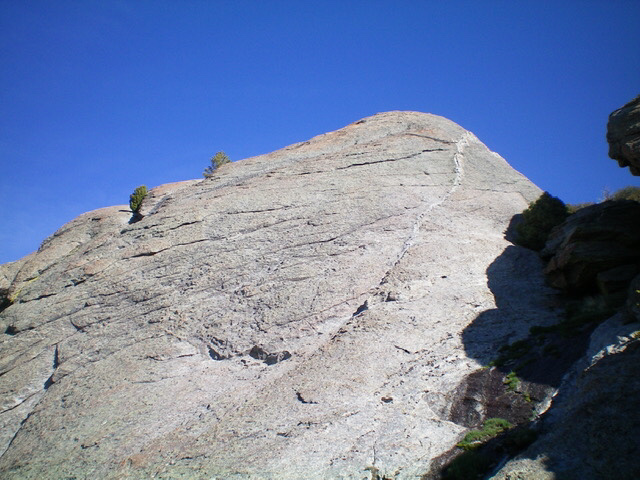 The massive summit block of Granite Peak. Climb the diagonal white ledge then head left up onto the crest of the massive block. Livingston Douglas Photo 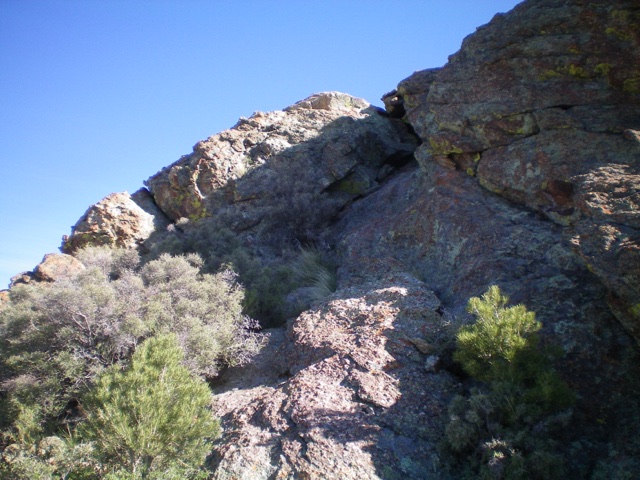 The Class 2+ chute (dead center) that leads up to the south side of the summit block to reach the airy top. Livingston Douglas Photo 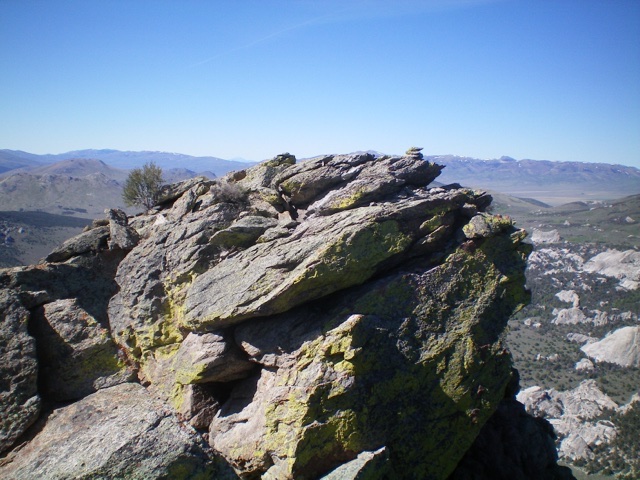 The summit block of Granite Peak as viewed from the nearby false summit block. I’m 6 feet tall and it is clearly higher than where I am standing. Livingston Douglas Photo 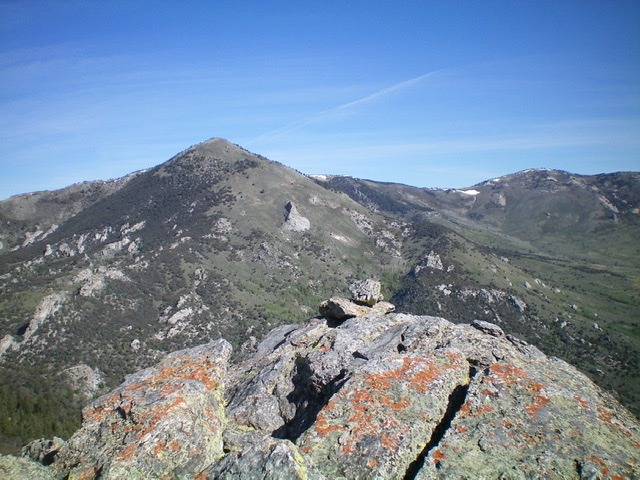 The small summit cairn atop Granite Peak with Graham Peak in the distance. Livingston Douglas Photo