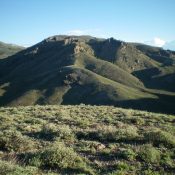 Peak 7780 is a rugged peak on its south, southwest, and southeast sides. It is most easily climbed from via its northeast ridge which is accessed via a jeep road to a saddle at its base. The measured southwest summit is 7,776 feet but the true summit (according to LOJ) is the more expansive, gentle hump that is in the middle of the summit cap (7,780 feet). I stood atop both potential summits and found that the southwest summit (7,776 feet) is actually the higher point both visually and by altimeter measurement by ten feet. In my opinion, LOJ is wrong on this one. USGS Miller Peak 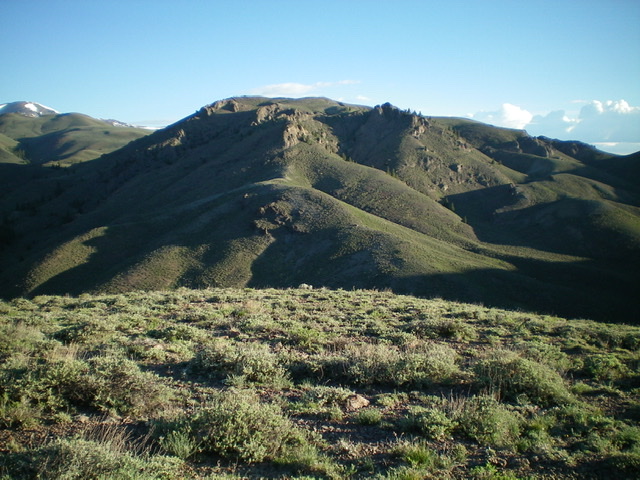 Magnificent Peak 7780 and its rugged south ridge (just left of center) as viewed from across Dry Creek Canyon. It looks impossible and it was next on my agenda for the day. I was, as they say, “quakin’ in my boots.” Livingston Douglas Photo

Antelope Creek Road/FSR-137 is located 11.5 miles north of the Conoco gas station at the south end of Arco, ID on US-93. The junction is poorly signed, so look for the road itself. Drive 19.5 miles southwest on FSR-137 to a signed junction with Dry Canyon Road/FSR-575. Turn right/west onto FSR-575 and drive 1.2 miles up the road to a major fork in the canyon. Park here (6,720 feet).

From the road junction at the fork in Dry Creek Canyon, climb northwest up a sagebrush slope to the south ridge and follow it steeply upward. Skirt the left/west side of a massive ridge buttress and continue northward up the ridge, climbing over or skirting just left/west of 2-3 smaller ridge towers. Higher up, there is a more serious obstruction—a diagonal-right ridge block that is knife-edged. It is best to climb the block’s narrow crest as the sides are steep and quite problematic. This ridge block goes at Class 3-4 and is the crux of this climb.

Once past the ridge block, life is easy. Scramble up short scrub for the final 300 vertical feet to the summit. Go left/northwest to reach the central summit (7760+ on the USGS topo map). There is a nice cairn here on a rocky outcrop. But measured Point 7776 (the southwest summit) appeared similar in height so I had to check it out. It turns out that Point 7776 is actually the high point by 10 feet (altimeter) and visually appears higher when you stand on it. This should be called Peak 7776 rather than Peak 7780. I respectfully disagree with LOJ’s placement of the summit for this peak.

From the central summit (7760+), descend the south ridge to the top of the ridge obstructions then descend an obvious gully heading southeast to the valley floor. This was a more difficult gully than it appeared to be from a distance. It was very steep, narrow, and loose (with veg/brush mixed in)—but it goes at Class 3. It is surrounded by cliff bands. The gully slope eases lower down and joins a gentler gully heading south. Pick up an old 2-track road farther down this gentler gully and head southeast on it to join the better, though badly rutted, 2-track road/trail (FSR-620) in the main gully that separates Peak 7780 from Point 7538 to return south to Dry Canyon Road and the junction at which this climb began. 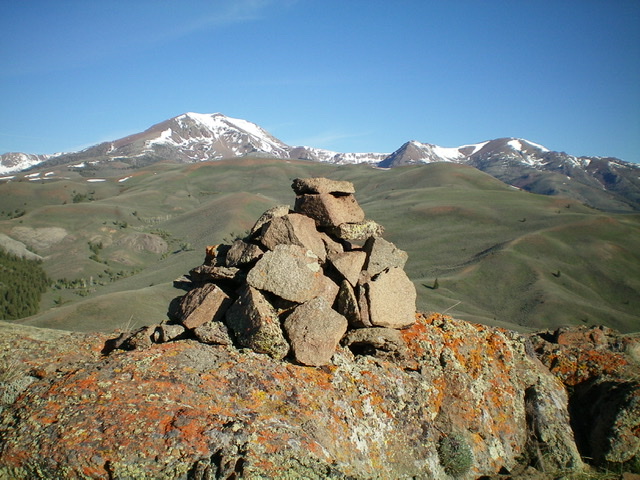 The summit cairn atop the [lower] central summit of Peak 7780, looking west-northwest with snow-capped Smiley Mountain in the distance (left of center). This is not the true summit, though some think it is. Livingston Douglas Photo