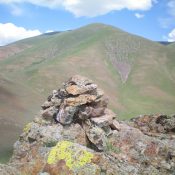 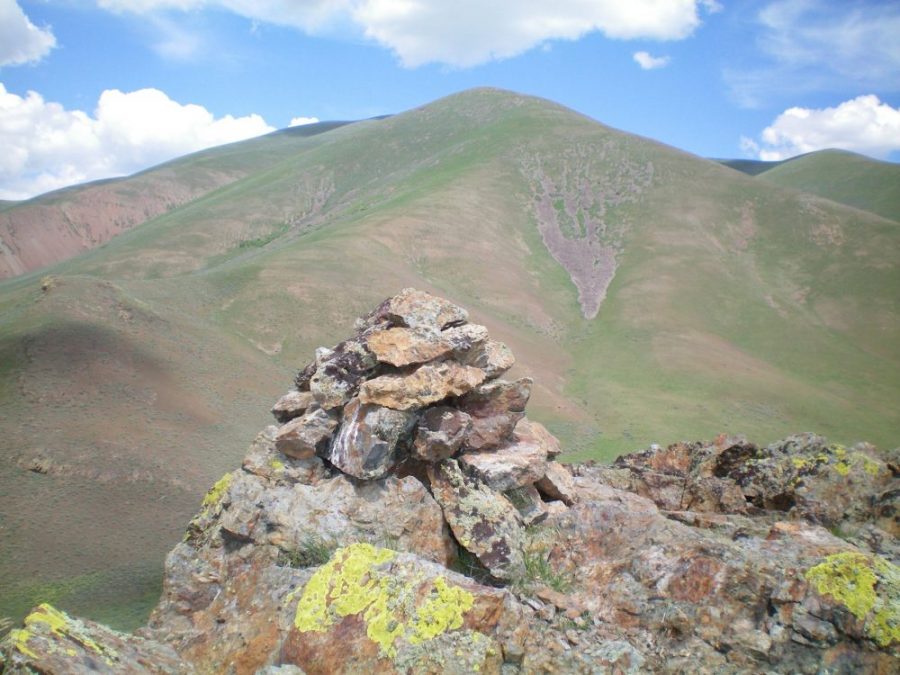 The summit cairn atop Peak 5764 with Peak 7900 in the background. Livingston Douglas Photo

Lava Lake Road (unsigned) is located just over 2.5 miles east of Lava Lake on US-20. It is 8.9 miles west of the entrance to Craters of the Moon National Monument on US-20. This gravel road is on the north side of US-20. Drive 1.0 mile northwest on Lava Lake Road to an unsigned jeep track on the right/north side of the road. Drive 0.1 mile up this jeep track to a cattle meadow. Park here (5,250 feet).

Same as for the southwest ridge

From the summit, descend the ridge south to Point 7600+. At this critical ridge juncture, head south (not southwest) to continue with the descent of the south ridge. Stay near the ridge crest during this descent. The south ridge is rockier (more talus/scree) and has a bit more scrub than the southwest ridge, especially in its lower reaches. Just prior to reaching US-20, you must cross a cattle fence. The ridge bends left/southeast for its final descent to the highway. Follow US-20 west to return to Lava Lake Road. Hike 1.0 mile northwest on Lava Lake Road then follow the 2-track jeep track for 0.1 mile to reach your parked vehicle in the grassy meadow.