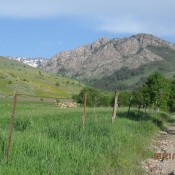 From US-91, turn east at the traffic signal in Franklin, ID. Follow State Street for 3 blocks and turn north onto 300 East. Follow this road north to Maple Creek Drive and turn right (east) follow road east until it turns to dirt and then “T”s at the foot of the mountain. Take the left (north) road and continue for about one mile past the farm house and sheds on the left. Immediately after this, a road takes off to the east (right). Take this road all the way to its end, where the trailhead is found. This road becomes very narrow and winds through scrub maple and past hay fields. The trailhead is protected by the Sagebrush Land Trust to preserve the right of way.

This trailhead provides access to a lot of great country. The Deep Creek Trail connects with the North Fork Trail/FS-002 which leads to High Creek in the Mount Naomi Wilderness. You can follow it over into White’s Canyon and down into Franklin Basin, or go down into High Creek. Incidentally, the highest point on the entire southern border of Idaho including Utah and Nevada is Point 9316, where Deep Creek and High Creek meet directly north of Double Top Mountain. 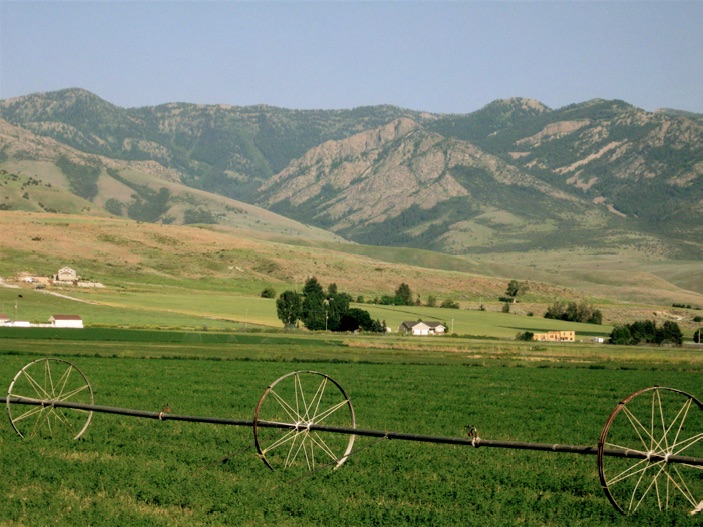 Deep Creek and Flat Canyons from Whitney, Idaho. Note the large river of rock running up Flat Canyon (right). Gobbler’s Knob is the large rock dome and slanting rock face at the top of the divide between the two canyons.

Looking up Deep Creek, Peak 8091 is hidden behind the ridge at center. The trail is on private trust lands for the first mile to the National Forest Boundary. Follow the trail about 2.5 miles into Deep Creek basin, until Gobbler’s Knob can be seen to the south and somewhat to the west. Go too far into the basin or you will need to backtrack. Don’t turn too soon or you will be in the rock- and brush-choked hollow west of the summit ridge. 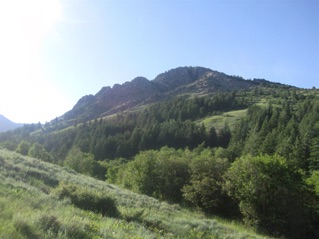 NOTE: There are two Oxkiller Canyons in this area within 5 miles of each other. The pioneers must have had some impressive mishaps in these canyons while getting timber out for the settlements in Franklin (Idaho’s oldest town) and Richmond/Cove, Utah. I can’t imagine taking an ox team into this stuff. I rode my horse into the lower part of these canyons long ago, but had to turn around because the horse’s legs were getting badly cut working through the rock, and it was much better at the bottom than what your can see here. Reminds me of the talus river I downclimbed from King Mountain in the Lost Rivers. Ask Matt why we were in the talus instead of on the trail like normal people. 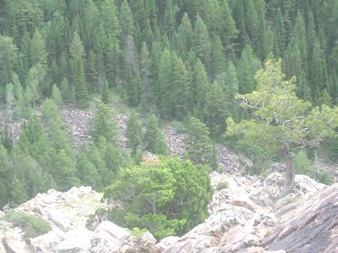 River of rock at the bottom of Flat Canyon (viewed from the summit of Peak 8091). It may be flat but it isn’t smooth. The next canyon south is called Oxkiller and this shows why. Russ Durrant Photo 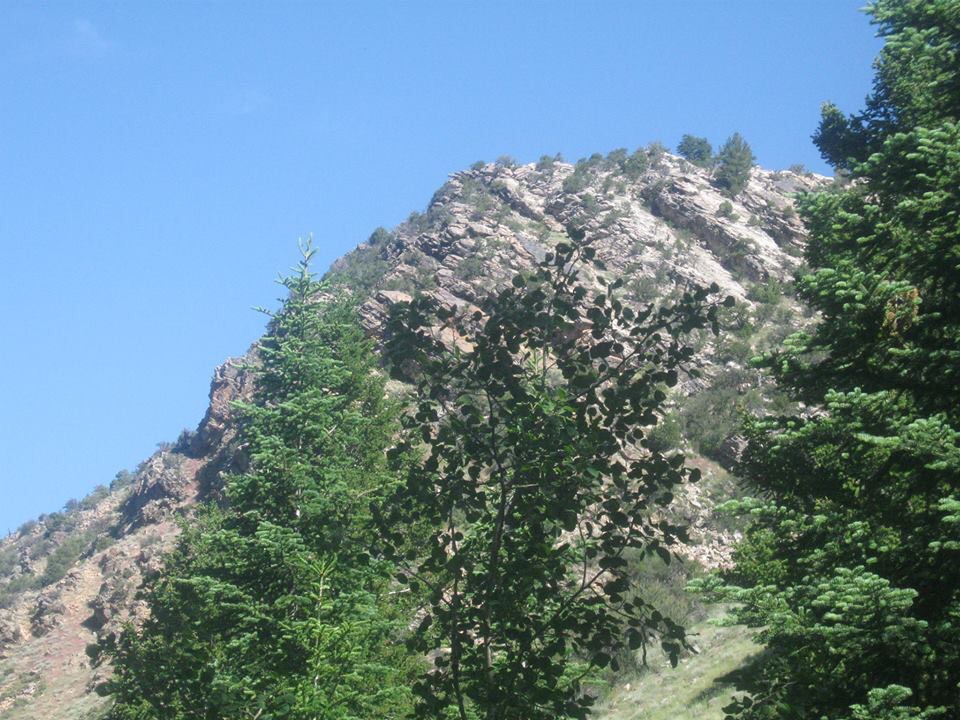 The trail follows the bottom of the canyon and heads southeast (behind the ridge in the right middle foreground) and climbs the divide to the the Utah/Idaho state line (slightly out of view on the right horizon). This trail connects to FST-002 on the North Fork of High Creek/Mount Naomi Wilderness side. It is actually a much shorter route into the back of Deep Creek from the High Creek (Utah) side, but this includes climbing over the 8,600-foot divide on the Turkey Trail (local name for FST-002) and then dropping into Deep Creek. 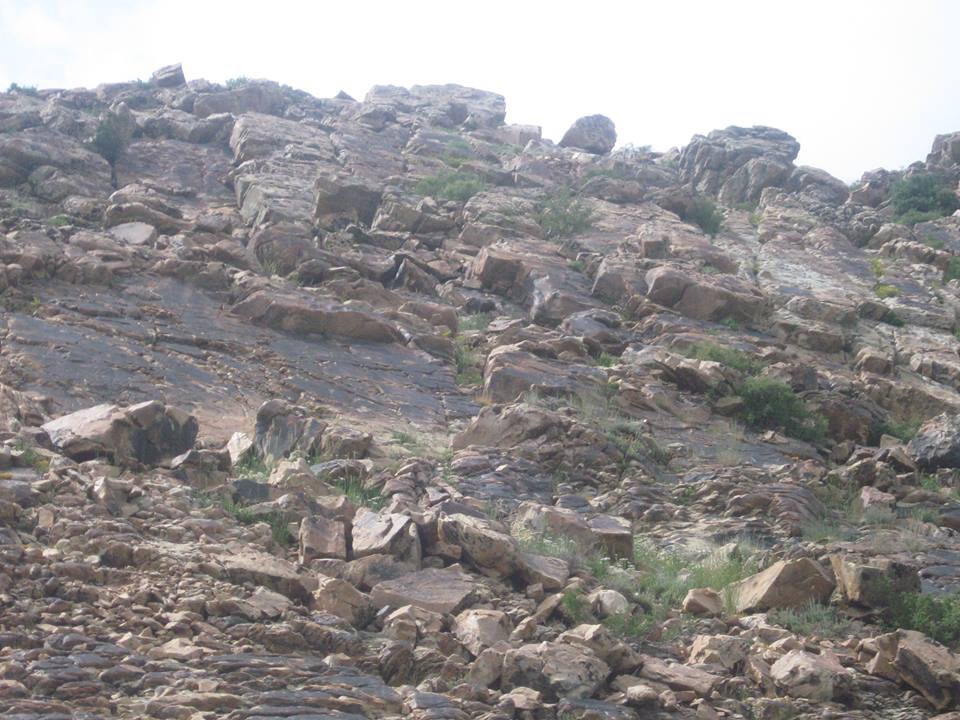 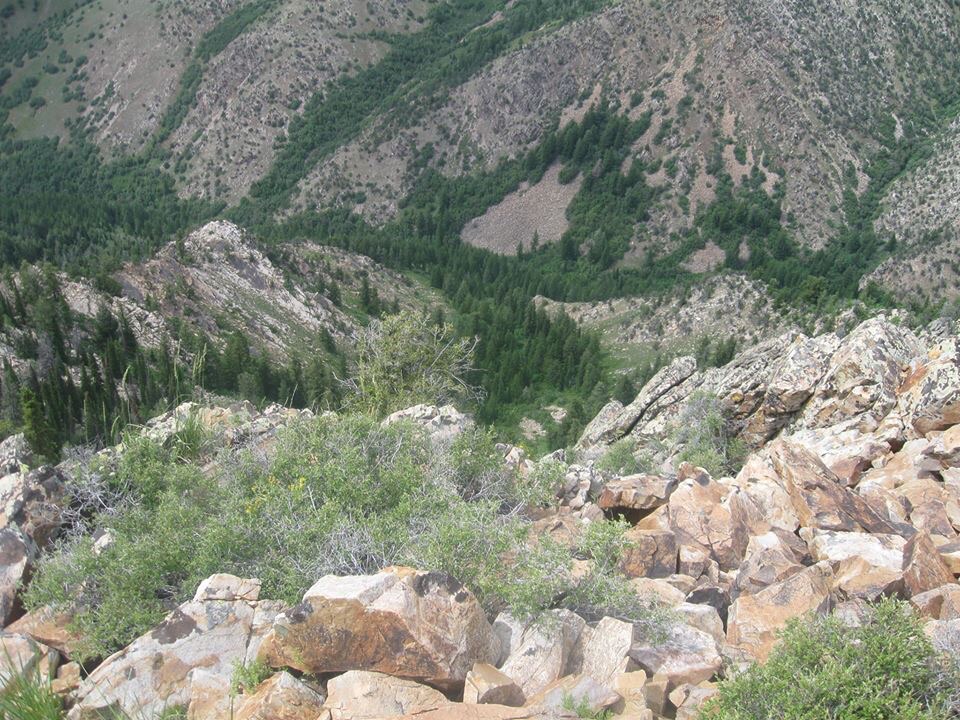 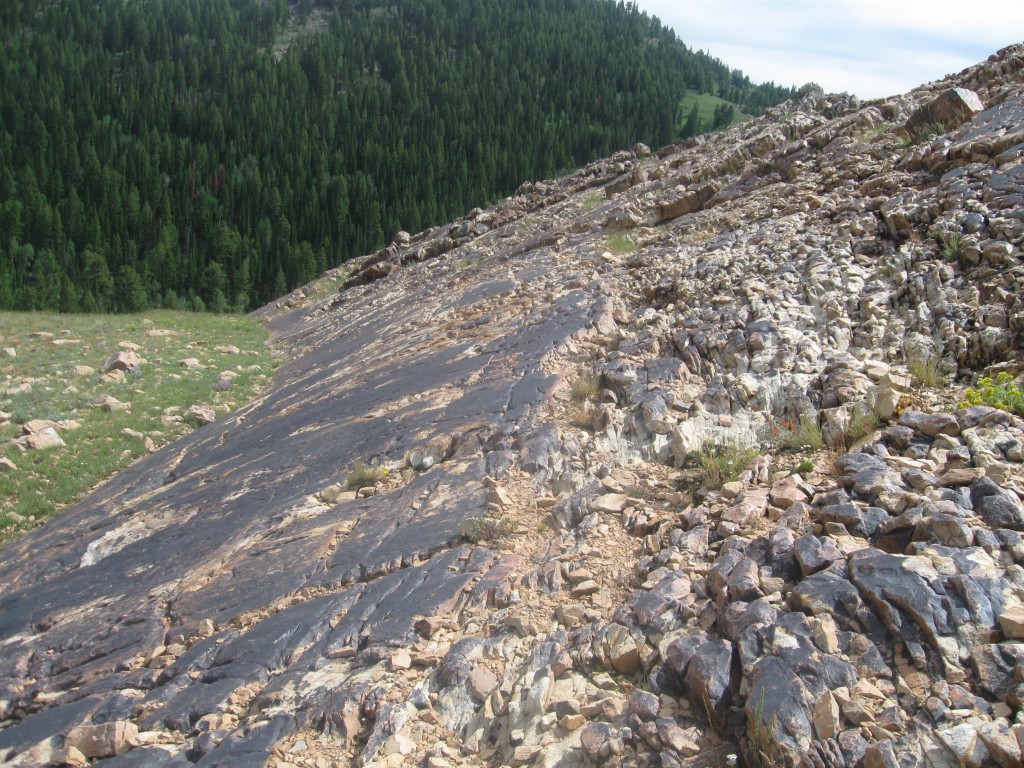 Rock band near the bottom of the summit block, taken on the way down. Looking southwest into Flat Canyon. Russ Durrant Photo 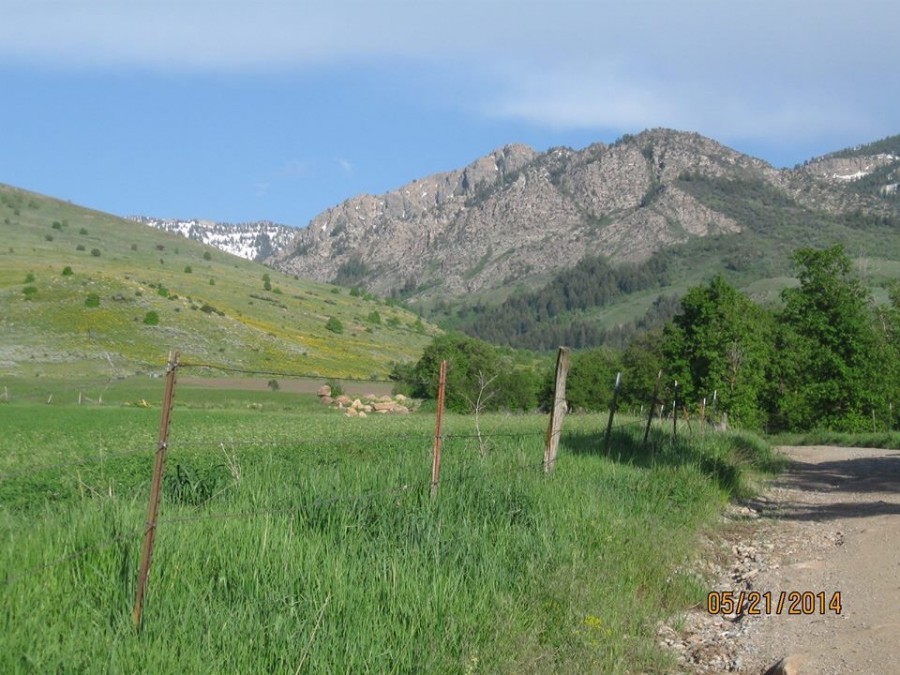 Gobblers Knob as seen from the approach. Russ Durrant Photo 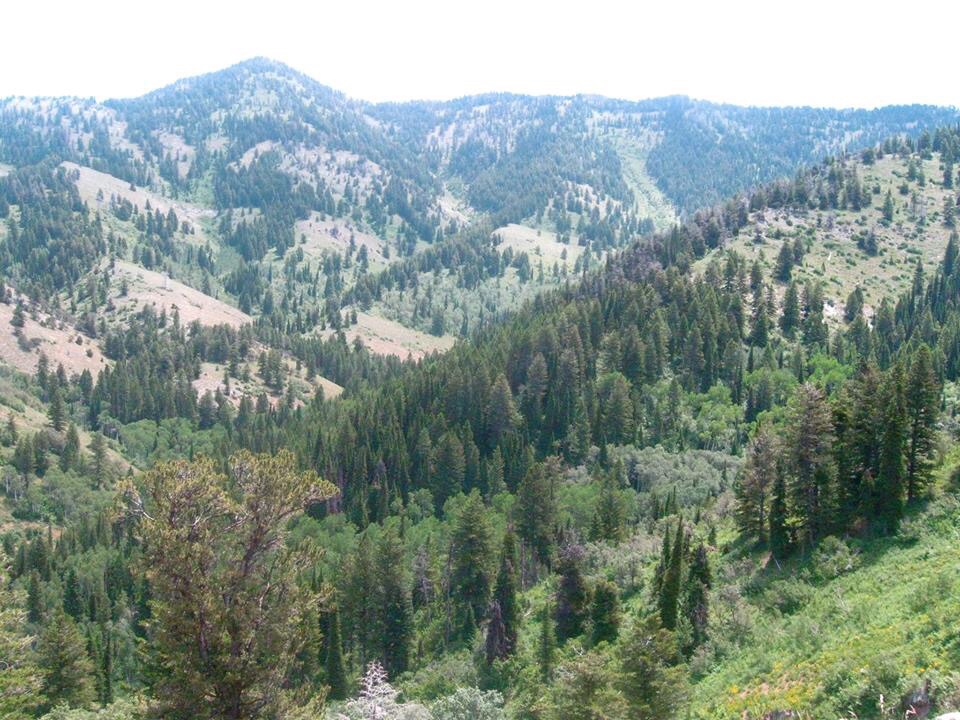 The view from Gobblers Knob.

To climb the peak, follow the trail through the lower canyon. You must cross the creek 7 times which is easy in the Summer and Fall, but in early Spring of a normal year you will be getting wet. Follow the trail into the Deep Creek Basin. You will see the large rock ridge to the south and west. Lots of downed timber off trail and very lush high grass. Stay on the east side of the rocky ridge; the west side is a sheer drop-off. But…it is much easier to cross the small gully to the south and stay in the timber and meadows to the top of the divide rather than to scramble the rock ribs and slabs that I did. I didn’t know if I was on the right ridge until I was almost on top. The summit block consists of a solid massive block of stone topped by shattered heaps of tortured rock. Very interesting. I’m not a geologist but the solid stone shows lots of glacial gouging and it is all darkly stained with desert varnish. 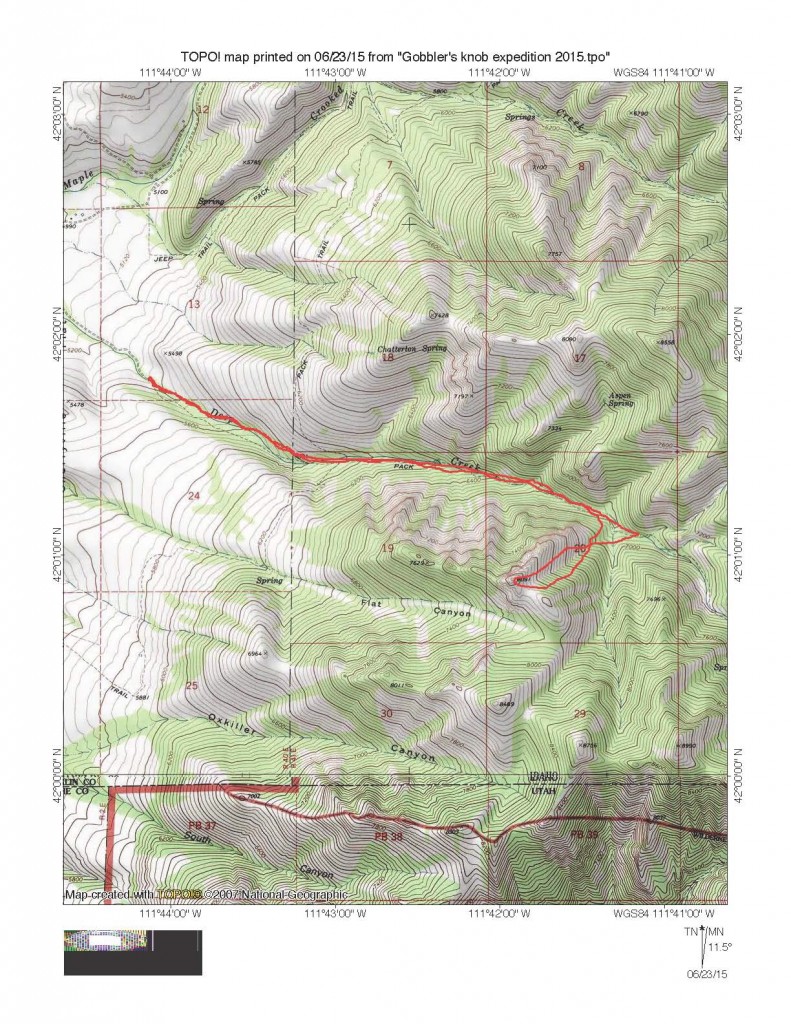