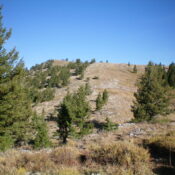 This peak is not in the book. Published January 2023 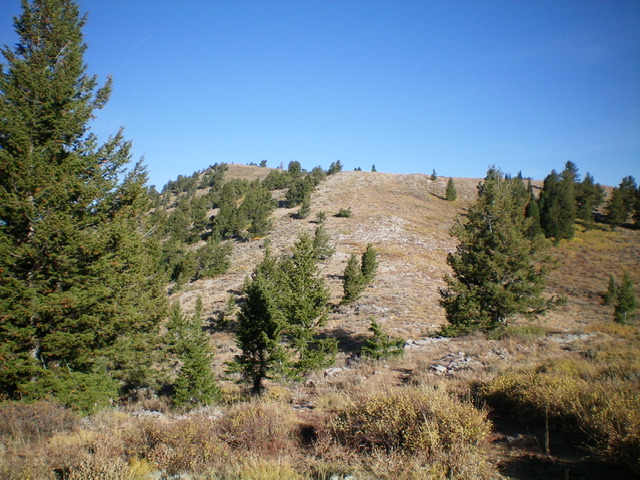 Peak 8371 (summit is left of center) as viewed from Saddle 7945 at the base of the southeast ridge (my ascent route). Livingston Douglas Photo

From Paris, ID, turn right/west off US-89 onto [signed] Paris Canyon Road/FSR-421. At 5.5 miles, reach the Cache National Forest boundary. Follow the signs for “Paris Ice Caves” and go right at a fork then left at another fork. At 9.1 miles, reach a signed road junction. Go right/north to stay on FSR-421. The road is much more rugged and rocky now and heads up a steep, narrow section to reach a ridge crossing at 8,220 feet. The road descends modestly and reaches a “T” junction with [signed] FSR-405/Green Basin Road at 10.5 miles. Go left/northwest here onto FSR-405. Drive 1.7 miles northwest on FSR-405 into Green Basin to reach a signed junction with FSR-423. Park here (7,956 feet).

There is a plethora of map errors in this area. FST-324 (shown on the USGS topo map) no longer exists. FST-354 (shown on the Caribou-Targhee National Forest map) no longer exists south of its junction with FSR-499 in Dry Basin. The USGS topo map fails to show FST-316 heading south (on the west side of Point 8391) into Horseshoe Basin, which it does. Both the Cache National Forest Map and the USGS topo map show a trail junction at the base of the southeast ridge of Peak 8371. No such trail junction exists. FST-316 crosses the saddle here and heads east. There is no other trail at that saddle.

From the 7,956-foot road junction, hike west then south on FSR-423 at the west end of Green Basin to reach a saddle and a ridge crossing at about 8,040 feet. The ridge to the right/west is the forested ridge (obvious when viewed from Green Basin) that separates Green Basin from Peak 8371. Leave the jeep road here. Bushwhack northwest to skirt the south end of this ridge and stay in open scrub to the left/southwest of the forested ridge. Reach an open saddle at the base of the east ridge of Point 8391. Scramble west up this ridge in mostly open scrub with a small patch of pines/aspens to bushwhack through. Once atop Point 8391, look through the trees to see Peak 8371 and its open southeast slopes to the northwest.

From Point 8391, descend a forested ridge north then northwest to reach Saddle 7945 at the base of the southeast ridge of Peak 8371. The first 100 vertical feet of descent on this ridge is in dense pine forest with lots of ridge blowdown and thick scrub. Thankfully, the forest opens up and is much easier after that with minimal blowdown and less underbrush. The ridge ends in an area of open scrub. Move left off the ridge here and intercept FST-316 (an ATV trail not shown on the USGS topo map). Head right/north on this trail to quickly reach Saddle 7945.

From the saddle, scramble northwest then west to the summit. The ridge is a mix of scrub and ground boulders/slabs. It is not difficult but it has a few minor ups and downs and drags on longer than I expected it to. The summit sits back from a false summit hump to its southeast. The summit of Peak 8371 has pieces of broken triangulation posts and lots of triangulation wiring to trip you up. There was no summit cairn so I built one on the rocky high point. The mostly-open summit offers splendid views of the surrounding area.

A direct route from Green Basin over the intervening, forested ridge is a shorter route but is probably not a good idea. This ridge has thick pines and aspens on its west side and drops to a dry gully with thick brush. Granted, after you climb west out of the dry gully, you can bushwhack up through semi-open terrain to intercept FST-316 and follow it west then southwest to Saddle 7945 at the base of the southeast ridge of Peak 8371. But the initial bushwhack to get there could be very unpleasant based on what I could see from Point 8391 to the southwest of the aforementioned intervening ridge. 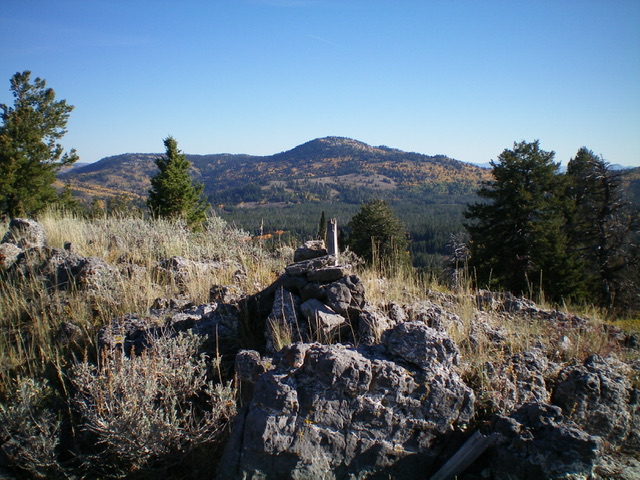 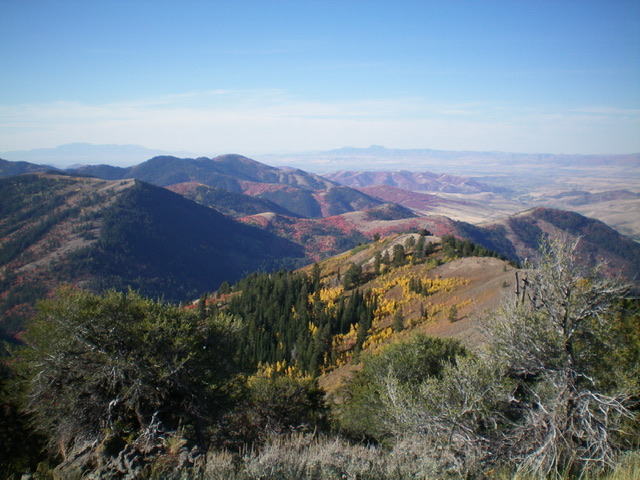 Looking southwest from the summit of Peak 8371 at the beautiful colors of Fall. Livingston Douglas Photo