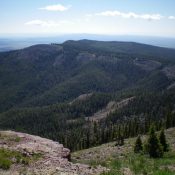 Peak 8382 is located in the Western Centennials. It sits at the head of Allan Canyon and is due east of Lookout Point (8,716 feet). Peak 8382 has the greatest number of cairns and other talus-based “artwork” that I have ever seen on a mountain top. It is impressive. Consequently, I unofficially call the peak “Rock Art Peak.” It is most easily reached via FST-005, an ATV trail (not shown on the USGS topo map) that skirts the south edge of the summit area. USGS Lookout Point 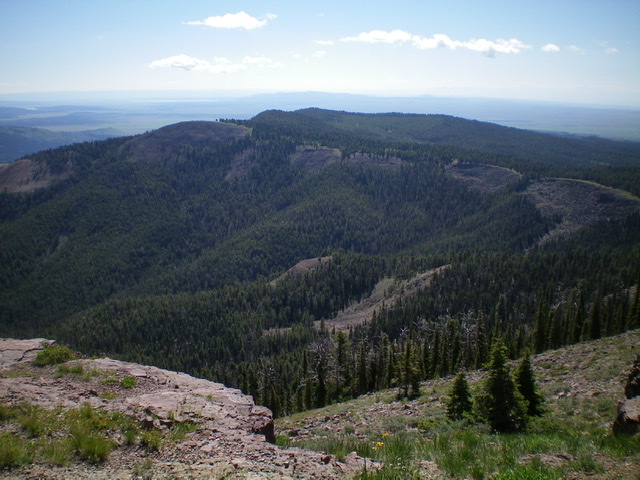 Peak 8382 (the bald hump left of center) and its southwest ridge (bare ridgeline heading to the right from the summit) as viewed from the summit of Lookout Point to the west. Livingston Douglas Photo

From the gated road closure on FSR-015, bushwhack southeast up a forested slope that soon becomes a well-defined ridge/shoulder. This bushwhack is a bit tedious due to brush, veg, and a fair amount of blowdown. Scramble up a section of open talus higher up to reach the north ridge at about 8,000 feet. From this ridge juncture, head south through forested terrain to reach a section of talus/boulders. Scramble up the rocky patch to arrive at the summit.

The summit (and the area just north of it) is covered with dozens of cairns, rock shelters, a rock staircase, archways, etc. It is stunning to come upon this area with no idea that it is there. Enjoy the rock art and take some pictures. You’ll probably never see anything quite like it again. The summit high point is at the south end of the talus-covered summit area and has a massive cairn. Not the tallest cairn I’ve ever seen, but probably the one with the most girth. From the open summit of Peak 8382, the view of Lookout Point to the west is amazing. 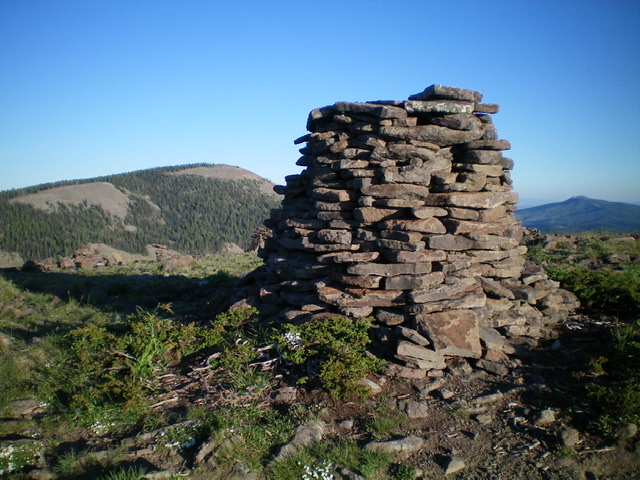 The massive summit cairn atop Peak 8382 with Lookout Point in the distance. Livingston Douglas Photo 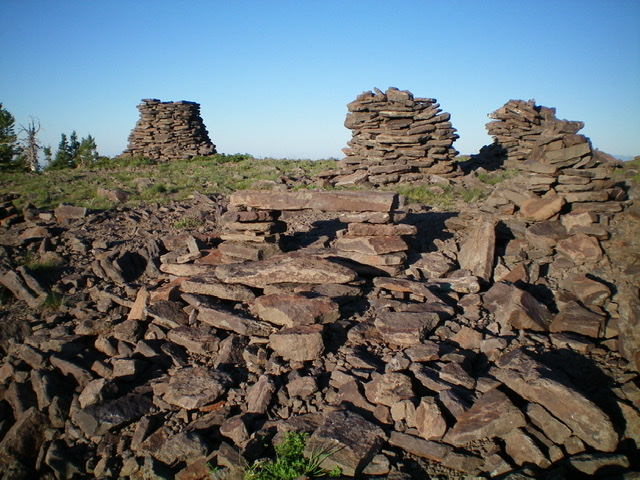 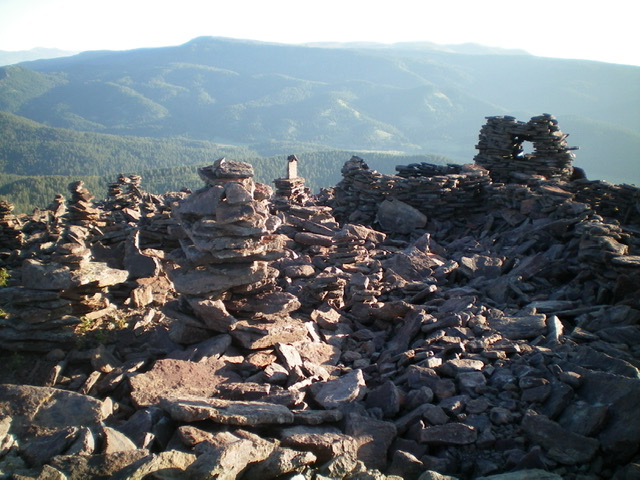 From the summit, walk a short distance south to reach FST-005 (an ATV trail/road that is not shown on the USGS topo map) that crosses the south edge of the summit area. Follow FST-005 southwest then west as it descends the southwest ridge to a broad saddle at 7,980 feet. This is the connecting saddle with Lookout Point and marks the conclusion of the first leg of today’s 3-peak journey. Lookout Point is next. 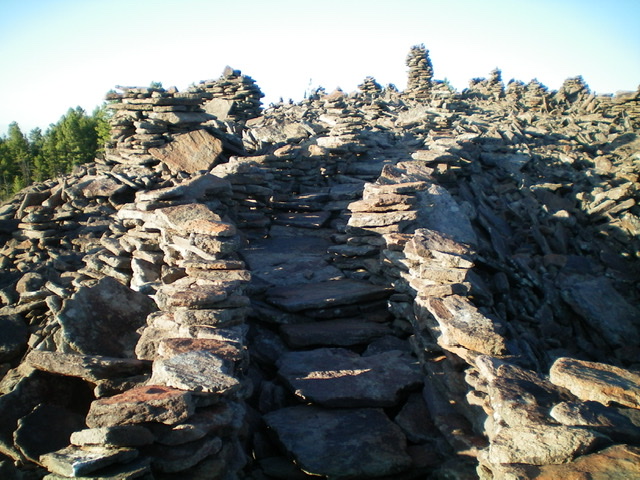 A stone staircase, a very tall cairn behind it, and other cairns. Livingston Douglas Photo 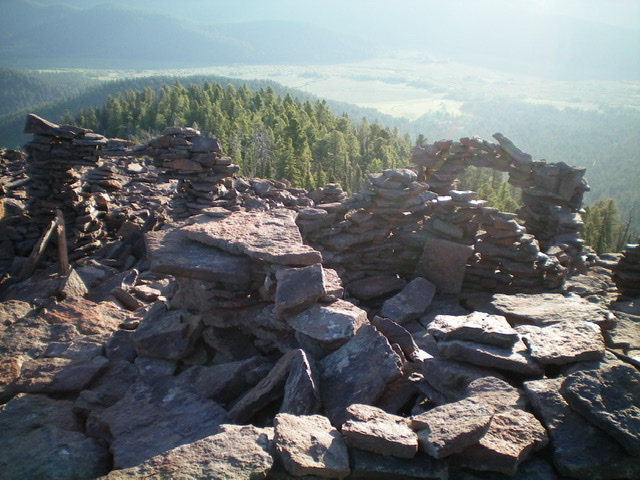 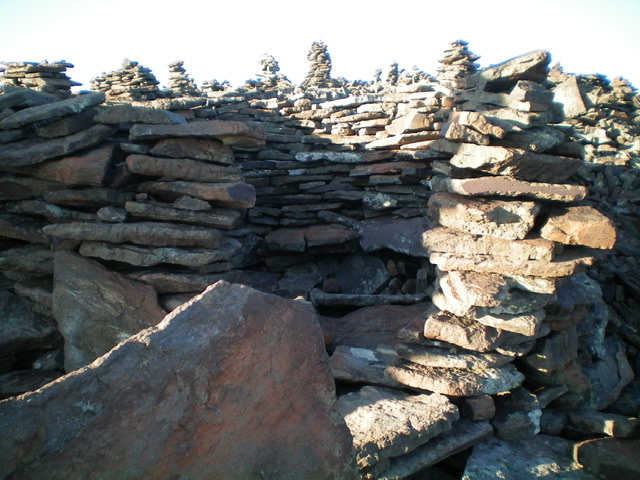 Closeup view of a rock shelter with more cairns nearby. Livingston Douglas Photo 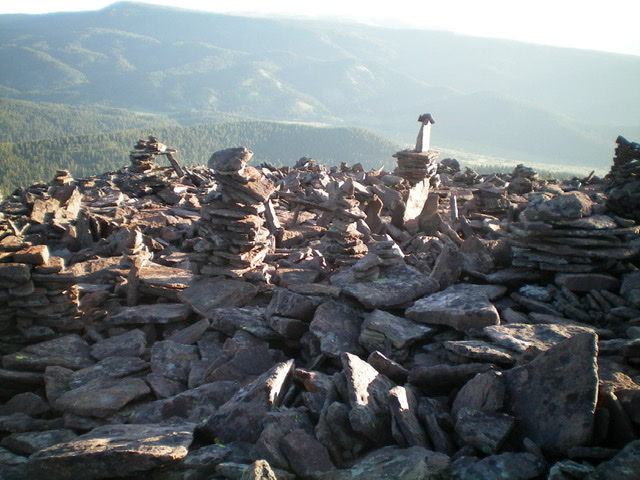 The cairns just never end. I couldn’t count them all. Livingston Douglas Photo