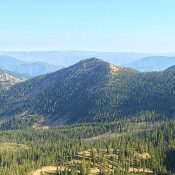 This peak is not in the book. Published August 2019

Peak 8722 is located between Pilot Peak and Elk Summit. Its slopes are composed of a red-tinted rock that is unique in this area. We ascended this peak in combination with Peak 8420. USGS Wolf Fang Peak 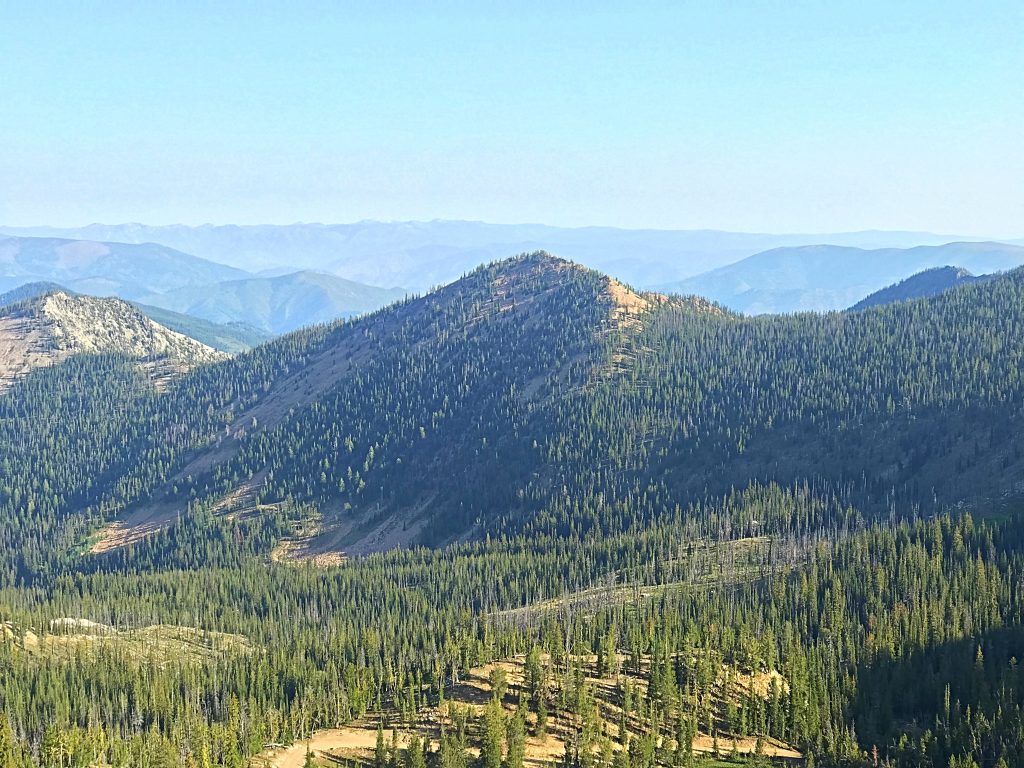 Peak 8722 as viewed from the southeast.

Primary access for this peak is from the road that runs between Yellow Pine and Warren, FS-340 [(B)(3.2) on Page 137]. FS-341 leaves FS-340 3.5 miles west of Elk Summit and runs to Pilot Peak in 5.1 miles. While this peak can be climbed from any spot along FS-341 or from the access road for Peak 9101, the West Ridge is probably the most efficient route to the summit. Follow FS-341 toward Pilot Peak until you reach a parking spot under Point 8314 and southwest of Peak 8420. This is one of the few wide spots on this narrow road. If you reach the Rattlesnake Mountain trailhead, you have gone too far. The road is steep in places but no rougher than FS-340.

Traveling through this area of the Salmon River Mountains requires a high-clearance vehicle with good tires at a minimum. These roads traverse burned areas and there is a high probability of encountering downed trees on the road. Taking a chainsaw is not a bad idea.

From the summit of Peak 8420, descend a short distance down the Southeast Ridge and then move west across talus to grass-covered slopes. Descend down these slopes to roughly 8,000 feet and then hike east across a talus field to the saddle between Peak 8420 and Peak 8722. This saddle is not level and has downed trees to work around, mostly on the South Slopes. Once you reach Peak 8722’s West Ridge, the forest opens up and there is easy climbing to the summit on the ridge. The summit is reached after 1.6 miles and just over 900 feet of elevation gain from the parking spot. As the map below demonstrates, we descended down to FS-341 rather than reversing our course.