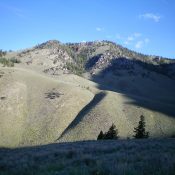 Peak 8923 is a ranked summit on the south spur of the west ridge of Point 10358 on the main Lemhi Range Crest. The south ridge is a magnificent scramble. From a distance, it looks problematic but it goes at a Class 2. You will see lots of evidence of elk on this mountain. The summit offers outstanding views of surrounding peaks. Do your recon and take your photos here. USGS Tyler Peak 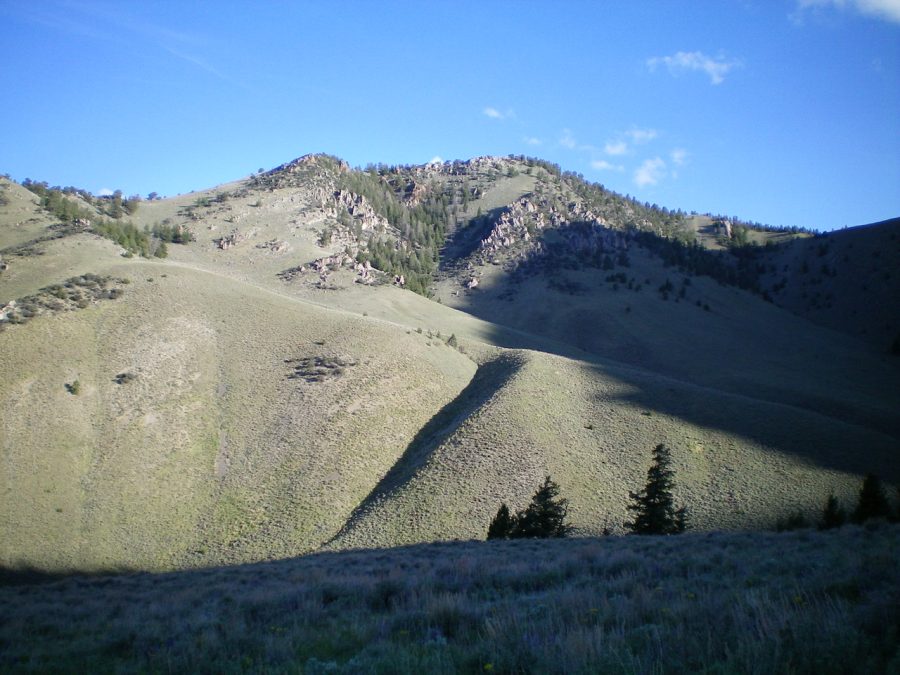 Peak 8923 (summit is in dead center) as viewed from a hillside to its Southeast. The left skyline is the upper half of the South Ridge. Livingston Douglas Photo

South Creek Road is located 7.6 miles north of Howe on the [paved] Little Lost River Highway. It is unsigned. Turn right/east onto South Creek Road. At 1.9 miles, go left/north at an unsigned junction just before the road crosses a cattle gate. The road now becomes a rutted 2-track jeep road and follows the left/west side of a cattle fence.

The South Creek Trail is overgrown, poorly maintained, and is not “hiker friendly.” It crosses South Creek numerous times in thick trees/brush with no footbridges. The creek crossings can be done without fording the creek, but it’s not always easy. At the least, this trail is tedious and time consuming. I don’t recommend it but, in this canyon, you have no choice. It is the ONLY trail here.

There is a total of sixteen (16) crossings, none of them with a footbridge or anything else to help you across South Creek. It is RIDICULOUS. It is a disgrace. The Challis National Forest map shows NONE of these creek crossings. The ATV trail/old road goes much farther up the canyon than either the USGS topo map or the Challis National Forest map indicate. It goes all the way to about 7,650 feet and ends in a feeder drainage on the east side of Peak 8923.

From the mouth of South Creek Canyon, follow the South Creek Trail/ATV road as it meanders upstream near the creek and crosses it twelve (12) times before reaching a large open meadow at a major fork in the canyon. This meadow is at the base of the south ridge of Peak 8923. Avoid the 6th/7th crossings and 9th/10th crossings by staying on the same side of the creek and bushwhacking a short distance upstream to find the road again. 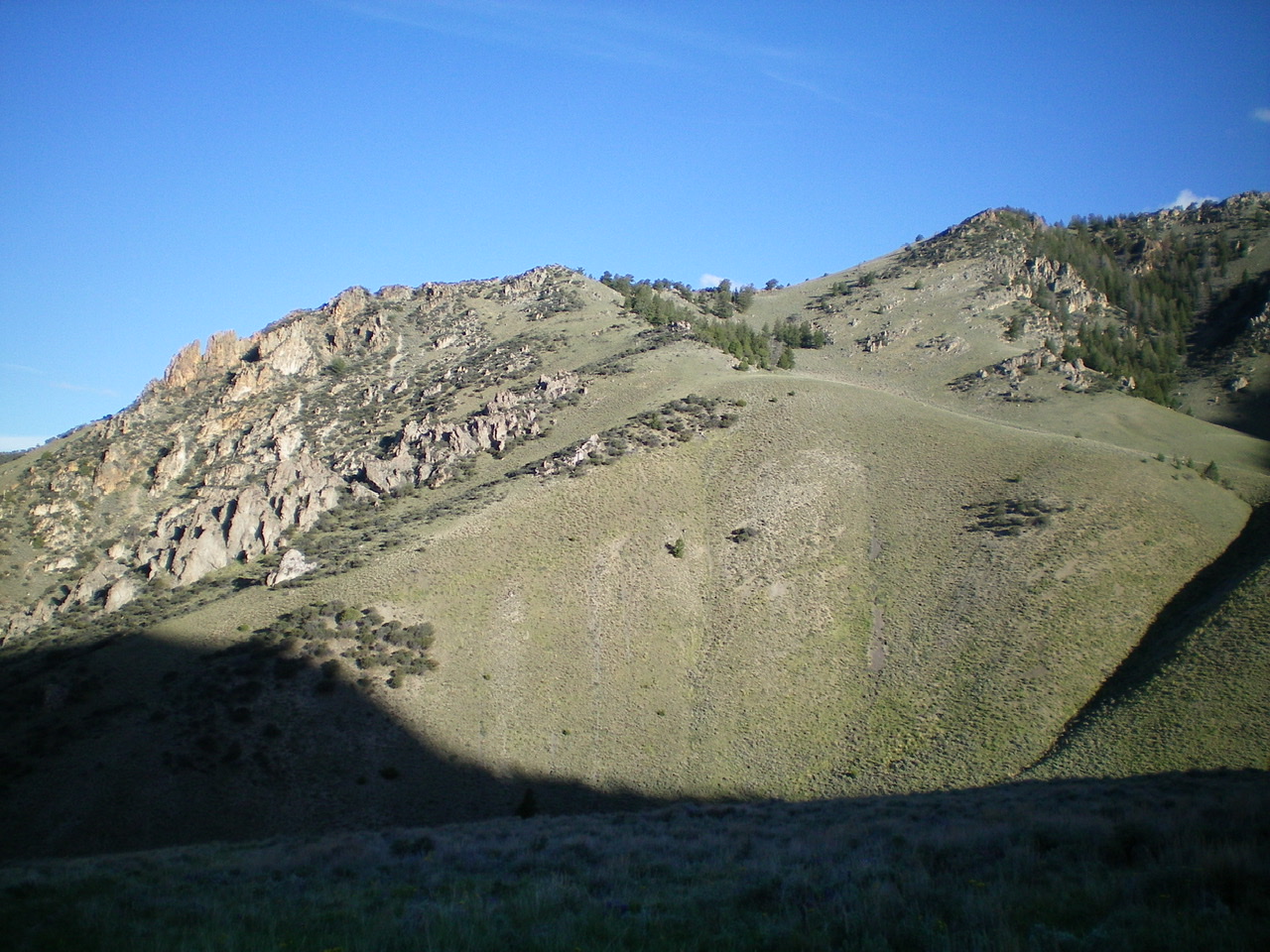 The lower 2/3 of the rocky, undulating south ridge of Peak 8923 as viewed from the east. The skyline is the south ridge. The summit is farther up and to the right and is not in the photo. Looks are deceiving. The south ridge is actually not very rocky and has only one minor undulation. The ridge goes at Class 2. Livingston Douglas Photo

The large open meadow is a short distance upstream from a rocky prow on the right/southeast side of the creek that separates the main canyon from a side canyon heading east then southeast. Don’t be fooled by this earlier “fork” as it really isn’t a fork at all. From the large meadow at the true fork in the canyon (after passing the rocky prow), leave the ATV trail/road and scramble across open terrain to quickly reach the base of the obvious south ridge.

Climb up the easy grass/scrub of the open ridge, skirting a few minor rocky outcrops/boulders partway up. Mountain mahogany joins the mix and, at about 8,300 feet, skirt the left/west side of some large rocky ridge outcrops. Continue to grind higher on mostly open scrub/grass with a good gravel/dirt base. You will find a good elk trail near the ridge crest to speed your ascent. After scrambling up over two or three final ridge humps, you reach the rocky summit. The summit has a modest cairn atop the highest protruding outcrop/boulder. 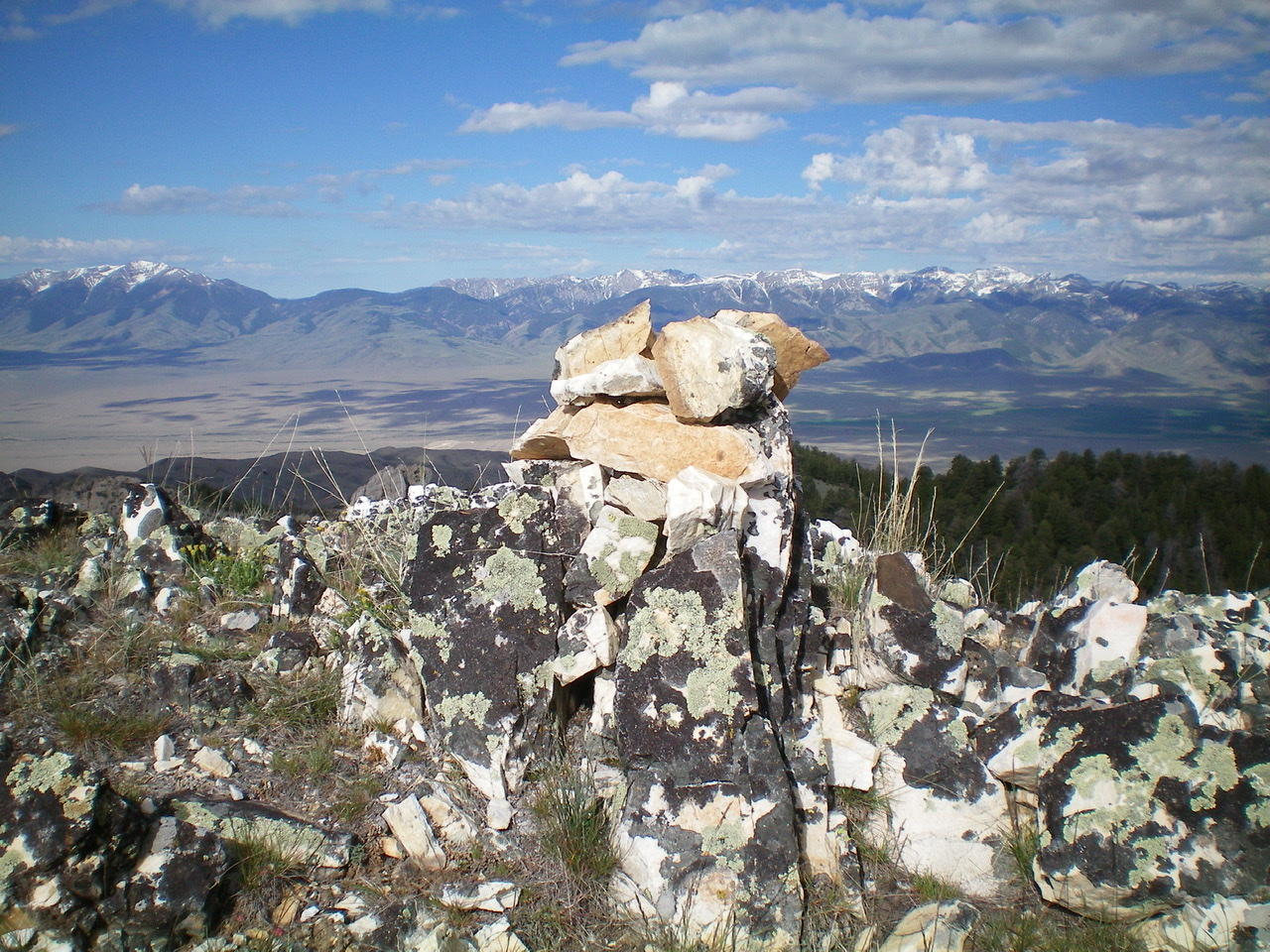 The summit cairn atop the rocky high point that is the summit of Peak 8923. Livingston Douglas Photo

From the summit, descend the narrow ridge crest northward through pine forest and some ridge chop. Leave the ridge at about 8,700 feet to descend east through open forest to reach a saddle. Follow a well-beaten elk trail southward from the saddle as it descends diagonally right across a steep, dry gully to reach gentler sagebrush slopes below.

Angle left/east to get closer to the center of the gully. Pick up an old 2-track jeep road on a shoulder on the right/west side of the gully. This old road is the beginning of the South Creek Trail/ATV road. Hike down the old road to reach the open meadow at the base of the south ridge. Follow the road (now officially an ATV trail) as it meanders its way downstream along South Creek to return to the South Creek trailhead.

View of the east gully of Peak 8923. The summit is in the upper left of the photo. Livingston Douglas Photo