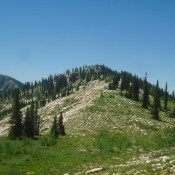 This peak is not in the book. There are two submissions found below. The first by Matt Durrant covers the peak’s north/northeast ridge. The second, by Livingston Douglas, covers the east and southwest ridges. USGS Paris Peak. Updated November 2018

This is another unofficially named peak that sits near the head of the North Fork Bloomington Creek drainage. Its south face is covered with slabs of bright white rock, probably quartzite. Its summit is on one piece of white rock. The peak is probably the farthest peak from any kind of road or trail in this area. While there are no technical challenges along any approach, White Face Peak is hardly ever climbed. Except for an ascent on Lists of John logged by Rick Baugher, I could find no evidence of this mountain ever having been climbed. There were no signs of people on the summit or in the surrounding area. The best approach to this peak is probably from the east via the ridge that forms the north side of the North Fork Bloomington drainage. It is also possible to approach from the bottom of the canyon and come up from the south. Unfortunately, the south face is quite a bushwhack and the large slabs of rock form an interesting, brush-choked labyrinth that you must contend with. 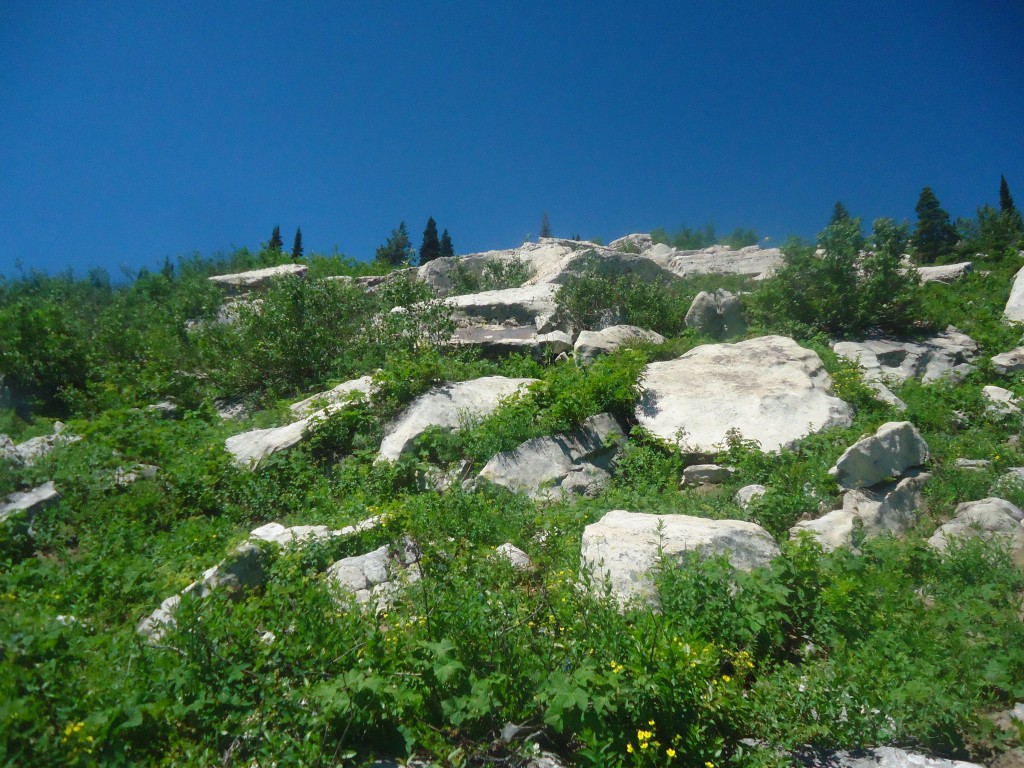 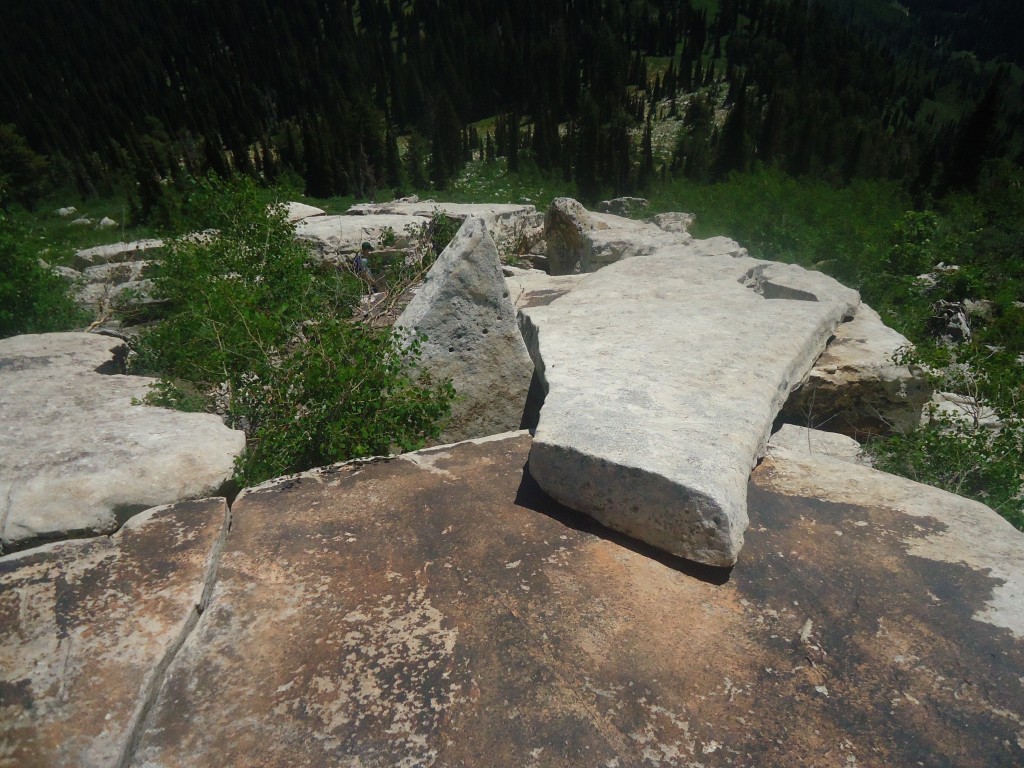 Near the summit. Matt Durrant Photo 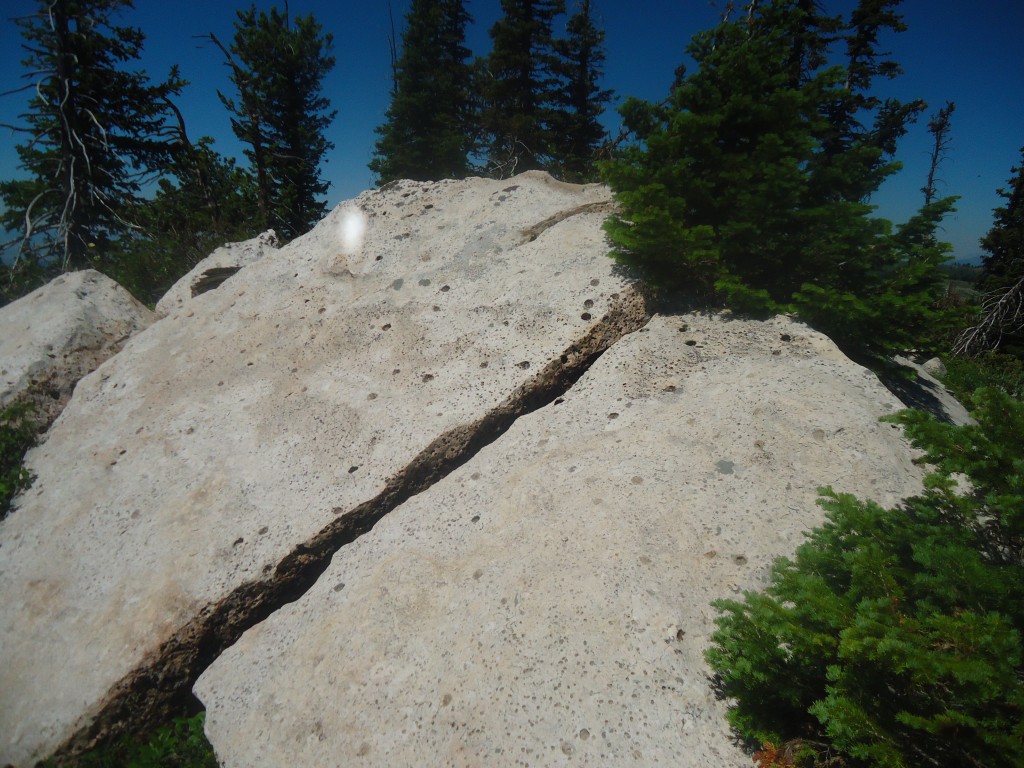 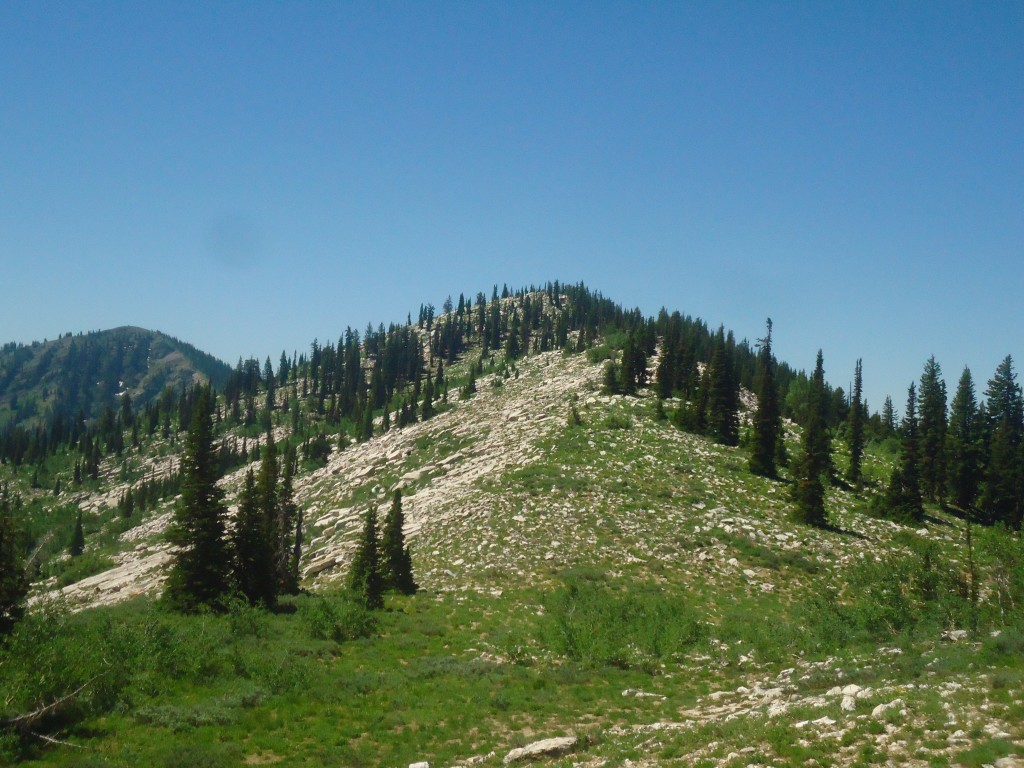 From US-89 in Bloomington, ID, turn west onto the signed Bloomington Canyon Road and follow this road for approximately 7.5 miles past the National Forest Boundary and park in the developed Paris Peak trailhead parking lot. The North Fork Bloomington Canyon is the drainage to the south. This drainage gives you access to all of the peaks in this area including Paris, North Paris, Whiteface, and Castletop. For Paris and North Paris, simply follow the ATV trail to the meadow between the two peaks and then work your way to the summit of either peak.

Whiteface and Castletop can easily be combined with Paris and North Paris for an amazing traverse by following the ridge that leads west from North Paris. Continue on the same ridge as it circles back to the summit on Castletop and then back down to the trailhead. For an ascent of Whiteface only, work your way up the North Fork Bloomington Canyon, all the way to its end and then ascend the peak from the south. For Castletop, simply cross the bottom of the canyon and work your way up the open ridge to the northwest of the trailhead.

This ridge climb begins at the 8,460-foot connecting saddle between Peak 8963 and Peak 8852. It is a section of the ridge traverse from Peak 8852/Castletop Peak. Please refer to the southeast ridge and west ridge routes for Castletop Peak for detailed information on the access from the Middle Fork Bloomington Creek Road/FSR-426. A less challenging, less boulder-strewn approach to the 8,460-foot saddle may be from the North Fork Bloomington Creek drainage itself, via its West Fork. That route is certainly less steep and approaches the 8,460-foot saddle from its north side.

From the 8,460-foot saddle at the base of the east ridge, bushwhack up open terrain. This scramble is a tedious mix of ground boulders and thick desert scrub which becomes a more-tedious mix of standard boulders and thick desert scrub higher up. The east “ridge” becomes more of a face climb higher up, as there is no longer a distinct ridge to follow. Stay to the right/north of the ridge crest to avoid steeper terrain to the south. There are no game trails or cattle trails in the unpleasant desert scrub. No wonder.

The summit area of Peak 8963 is a rather unimpressive north-to-south ridgeline. This ridgeline is a combination of large boulders and trees. The high point itself is simply the highest ground boulder that protrudes from this ridgeline. It is easy to stand atop this high point. There were no signs of previous ascent.

From the summit, descend southwest across a boulders/veg mix initially then down through steep, thick, tall desert scrub. I most certainly would not want to ASCEND this route. Soon, the jeep road that crosses the saddle below you (FSR-426) comes into view and the ridge bends westward/rightward a bit.

You can also see a turnout on the far side of the road. Aim for this turnout as you get closer to the 8,260-foot saddle. I found a few deer trails about mid-way down this descent and even saw a solo doe mule deer in the scrub. I’m sure it was quite surprised to see me. When you reach the saddle, you will find that the road has an old cattle guard still embedded in it. This is FSR-426, the same road that you parked along. 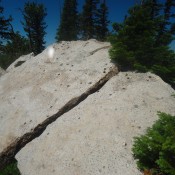 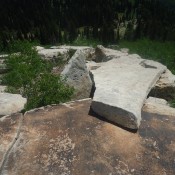 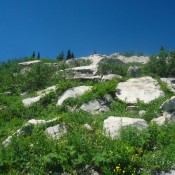 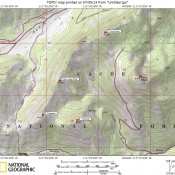