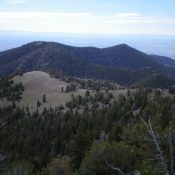 Peak 9300 sits at the head of Rocky Canyon in the South Beaverheads. It is a secluded, forested summit that is difficult to reach. The bushwhacking in this area is not fun. Navigational skills are required to successfully climb this peak. Peak 9300 is Peak #4 of five summits in a single-day adventure called the Tour de Gallagher. USGS Copper Mountain 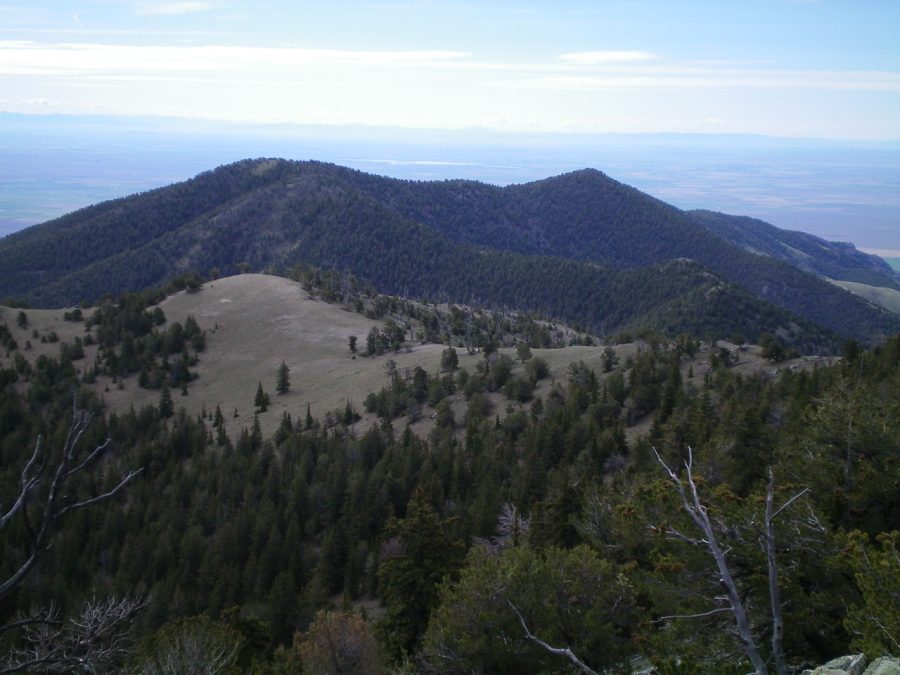 Peak 9300 is the forested ridge hump in the distance (left of center) as viewed from the summit of Bloom Benchmark. Livingston Douglas Photo

Same as for the east ridge of Gallagher Peak (9,825 feet). This is the final leg of a ridge traverse from Bloom Benchmark to Peak 9300.

From the 8,740-foot connecting saddle with Bloom Benchmark, begin a somewhat torturous up-and-down, twisting/turning ridge traverse through pine forest to reach Peak 9300. Pay close attention to the USGS topo map when you do this traverse. Thankfully, the ridge is pretty well defined and it’s hard to get off course. In addition, there is a good elk trail near the ridge crest to help expedite this ridge traverse through the forest.

From the saddle, follow the ridge crest south up over Point 8973 and down to another saddle. At this saddle, the ridge doglegs left/east and has some minor bumps and rocky outcrops to navigate. Stay in the open forest on the left side of the ridge crest for fastest going, using an elk trail when it is there. The ups and downs never seem to end, but eventually you reach the [false] northwest summit. From there, drop southeast to a final saddle and the climb southeast to the true summit of Peak 9300. The final uphill is an easy cruise up through an open pine forest.

The exact high point of Peak 9300 is debatable. The first choice is the open scree-and-rocky protrusion area in the middle of the flat summit plateau. This is the high point that the USGS topo map suggests and I believe that it is the correct one. I built a summit cairn here. There are a few scattered pines nearby. The second choice is a large tree blowdown to the northeast. It measures of equal height. Stand at both locations to be satisfied that you stood on the high point of Peak 9300. 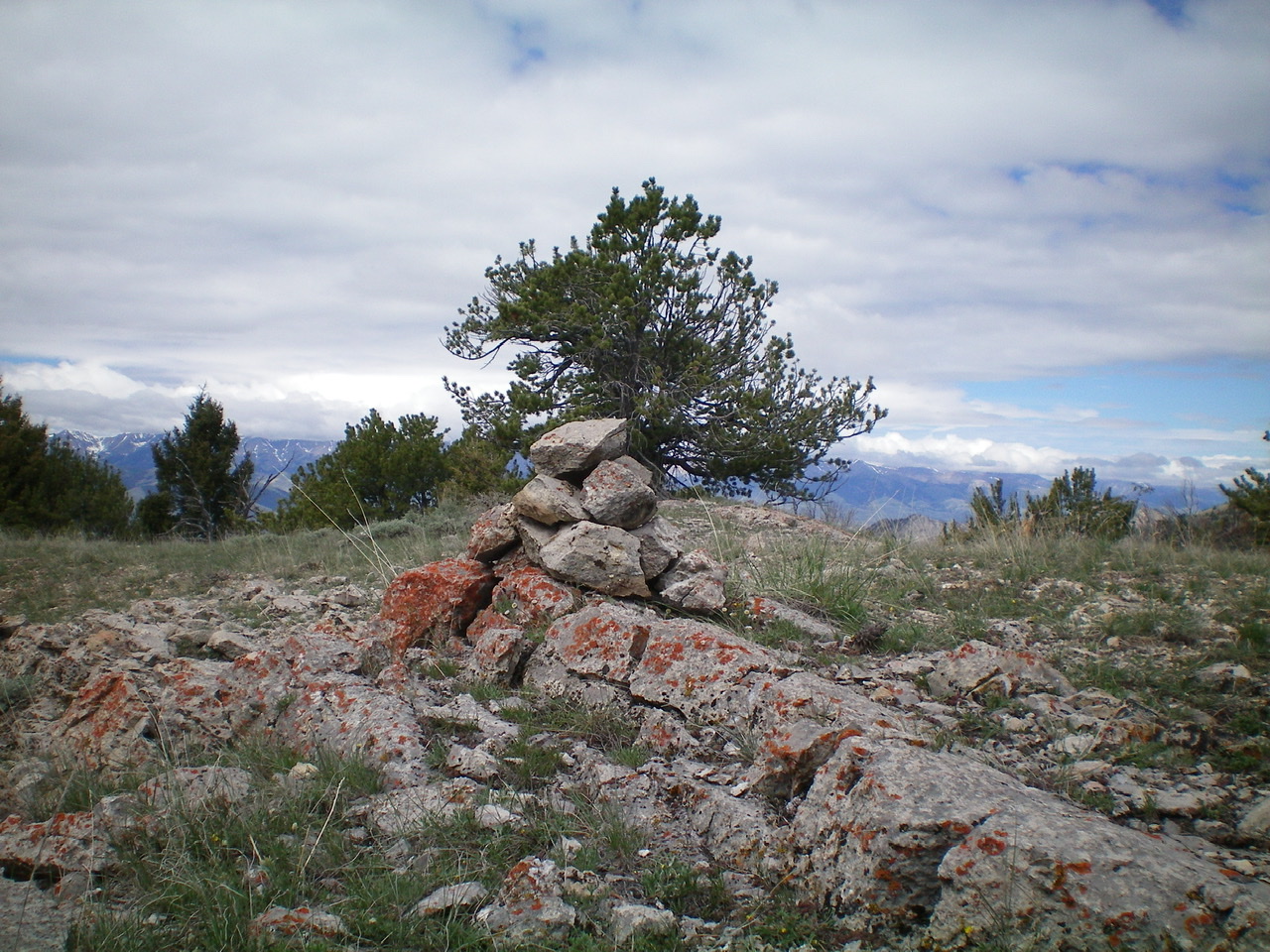 From the northeast end of the summit area, descend the [obvious] north ridge. It is well-defined and easy to follow down through an open pine forest. Stay just left/west of any rocky ridge outcrops. The forest is open enough to get a good look at rocky Peak 8365 (the next peak of the journey). Peak 8365 is below you and dead ahead. The south aspect of Peak 8365 is an ugly mess of steep, choppy rock (aretes and gullies). The USGS topo map shows this face as forested but there are few trees to be found. It’s almost entirely rock. 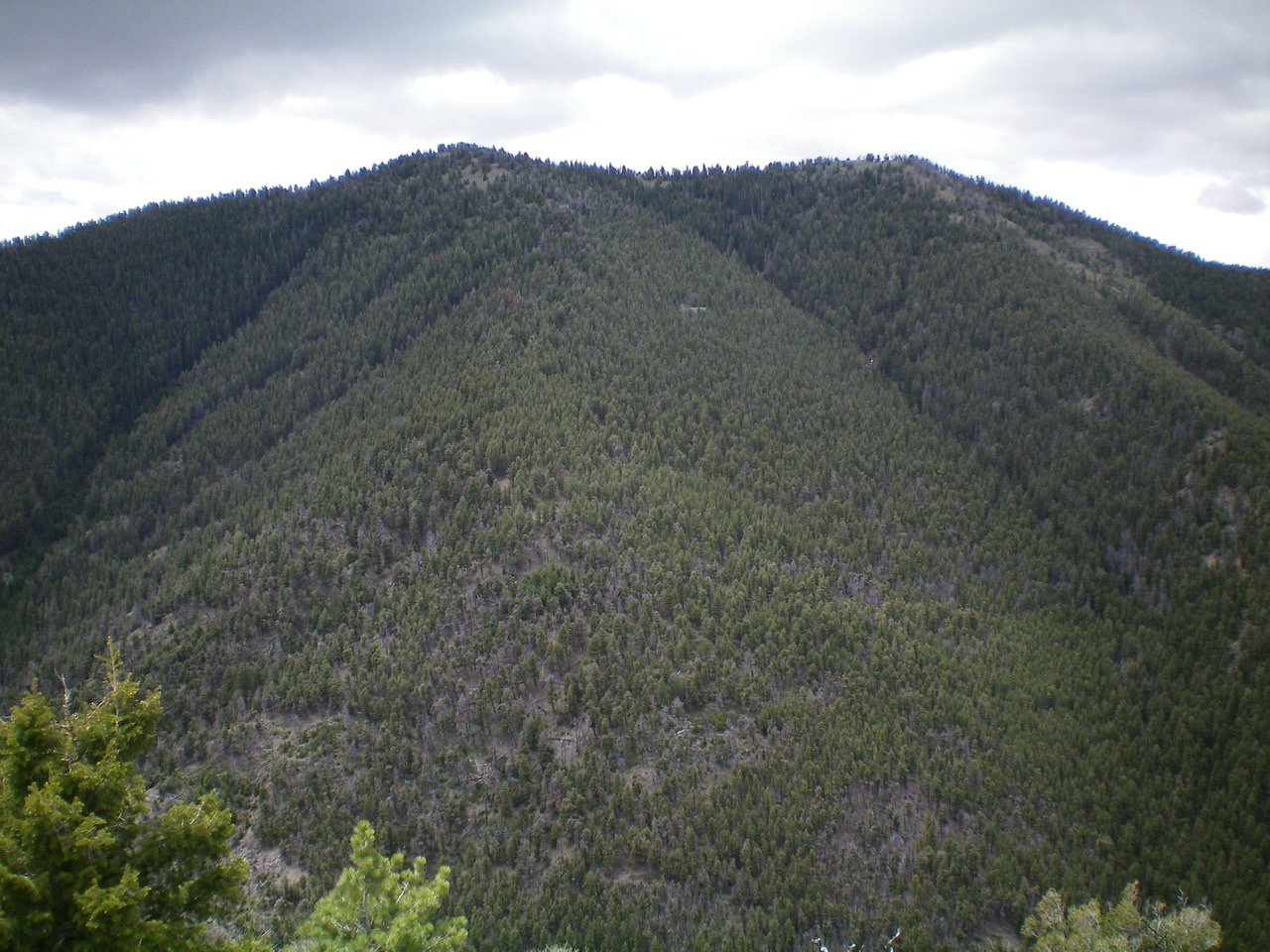