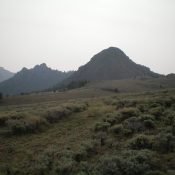 Peak 9380 is a rocky summit that is located on the north side of the East Fork of the Big Lost River. It is best climbed with nearby Peak 9292 to its west. Rick Baugher provides some superb photos of Peak 9380 on the LOJ website as well as a brief commentary on his climbing route (See link below). USGS Harry Canyon 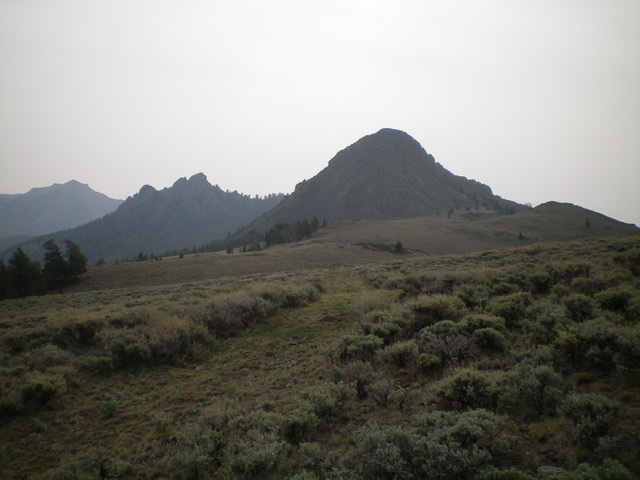 Rugged Peak 9380 (the middle hump, left of center) as viewed from the west. Livingston Douglas Photo

From the signed junction of FSR-135/Copper Basin Road and FSR-136/Wildhorse Creek Road, drive east on FSR-135 for 4.8 miles to a sign for “Stag Creek” and a side road that leads down to a campsite and parking area on the south side of the East Fork of the Big Lost River. This side road is not shown on the USGS topo map and the Challis National Forest map but it is shown on the Sun Valley Idaho Trail Map (Adventure Maps). Drive down this short 2-track road (4WD recommended) and park in a grassy area alongside the river. Stag Creek is on the opposite side of the river.

The east side of Peak 9380 is probably the only feasible climbing route, finishing with a climb of the northwest gully (Class 3). The shortest way to reach the saddle at the base of the east face is from Copper Basin Road/FSR-135 to the south. It requires a ford of the East Fork of Big Lost River, so it should only be done in late Summer or Fall to keep water levels reasonable. Once across the river, climb a long south ridge up to 8,800 feet. Contour northwest under Point 8990 to reach the 8,820-foot saddle at the base of the east face. Work your way around to the northwest side and climb a gully to the top. This is the only documented route on Peak 9380 and was completed by Rick Baugher.