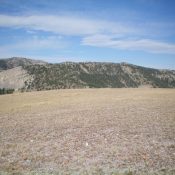 Peak 9768 is located on the Continental Divide. It towers over Deadman Creek (MT) to its west and Divide Creek Lake (ID) to its south. Peak 9768 is the quintessential ridgeline summit. It is most easily climbed via Divide Creek Trail/FST-111 and its northeast ridge. USGS Deadman Lake 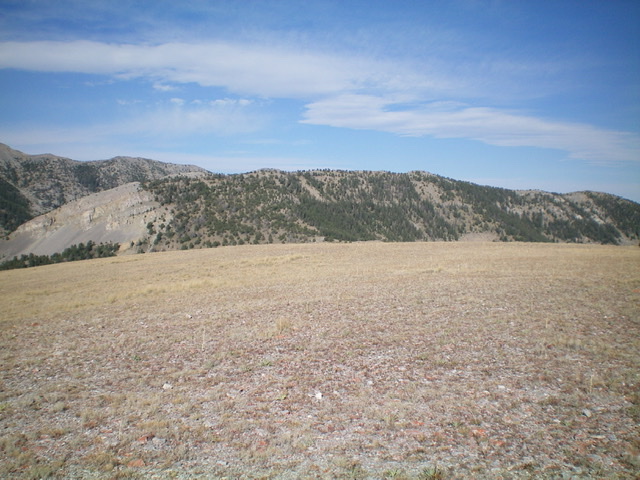 The elongated summit ridge of Peak 9768 as viewed from the east. The summit high point is left of center. Livingston Douglas Photo

Same as for Peak 8980. This is the second leg of a two-peak journey that includes Peak 8980 and Peak 9768. It begins at the Divide Creek trailhead.

From the 8,540-foot connecting saddle with Peak 9890, follow the CDT southwest on an old 2-track jeep road for about ½ mile to reach an obvious gap between two sections of forest on the left/east side of the road. Leave the CDT/road here and scramble south up a sagebrush slope to approach a saddle between two scrub humps (Point 9268 and Point 9200+). Scramble south up a grass/scrub slope to the top of Point 9200+ (which has an ID/MT boundary post atop it) then descend south to a saddle in open scrub.

From this small saddle, bushwhack south directly at Point 9641 through a relatively easy pine forest to reach the ridge line just north of Point 9641 in open terrain. Follow the ridge briefly south to the top of Point 9641, an open hump with an ID/MT boundary post on it. Peak 9768 is visible from here. It is about 0.6 miles south-southeast on the narrow ridgeline/Continental Divide. It appears as a pyramidal, open summit. From Point 9641, descend south-southeast on the ridge to a gentle scrub/grass saddle then skirt a few minor rocky ridge outcrops to reach the final scramble up scrub to the narrow, rocky, ridge-crest summit of Peak 9768. There is a decent cairn on top. 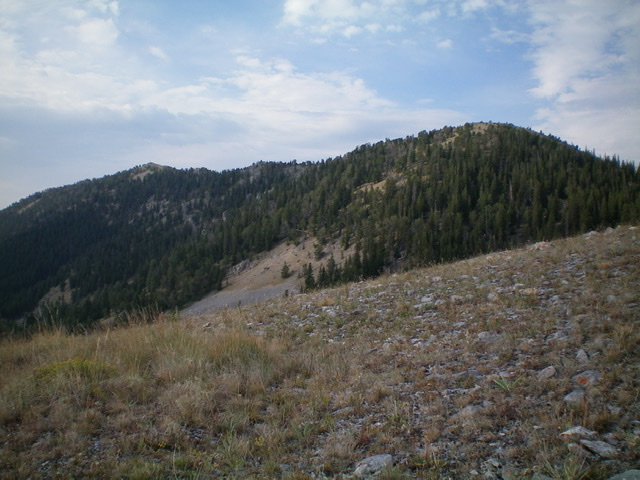 The forested Continental Divide summit ridge of Peak 9768 as viewed from the north. The summit is the bump far left of center. Point 9641 is the gentle hump right of center. Livingston Douglas Photo 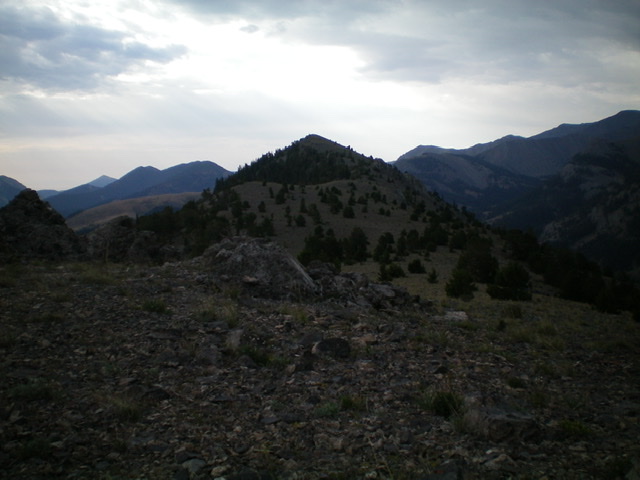 Looking south at the pyramidal summit of Peak 9768. The darkness is the result of an incoming thunderstorm. Livingston Douglas Photo

From the summit, descend northeast on steep, open terrain (talus/scree) down to a pine forest to reach a magnificent scrub/grass shoulder that is wide and obvious. The forest bushwhack is not too onerous. Follow the open shoulder northeast over Point 8777 and down through thicker sagebrush (a bit tedious) to reach a saddle just south of Point 8102. Descend a well-beaten cattle trail diagonally right/southeast through forest to reach a sagebrush slope that quickly drops to Divide Creek at a green, marshy meadow. Follow a cattle trail north along the creek (or dry creek bed in mid-summer) to find a place to quickly scramble right/east up onto FST-111. Follow FST-111 for about three miles to the Divide Creek trailhead. 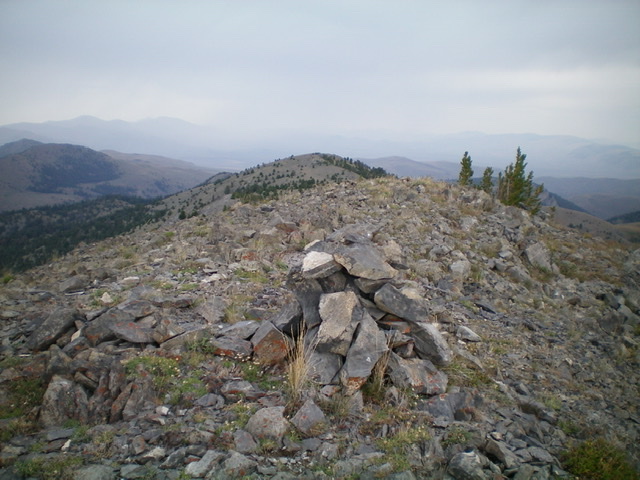