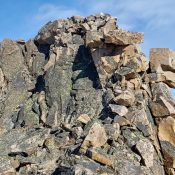 This peak is not in the book. Despite the fact that a trail crosses its West Ridge, until Brett submitted no one had reported climbing this peak. Updated May 2021

Peak 9934 is located due south of Imogene Lake, east of the Sawtooth Crest, and west of Imogene Peak. In October 2019 I attempted this peak from the west but got cliffed out. I returned in 2020 and succeeded via the route set out below. The views from the summit are awesome of the surrounding peaks and lakes. USGS Snowyside Peak 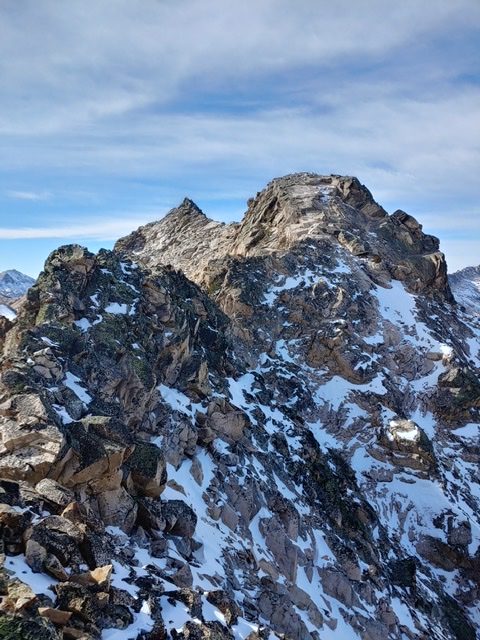 Approaching the summit towers of Peak 9934 from the east. Brett Sergenian Photo

Climb the loose gully to the peak’s east ridge just below the peak’s two summits towers. I used the gully for my descent and took the east ridge from Imogene Peak. The ridge is straightforward until you get close to the summit where you will have to descend into the next gully over. The west summit is an easy scramble and from the east summit I scrambled up the class 3 or 4 north side. I thought the east summit was higher. 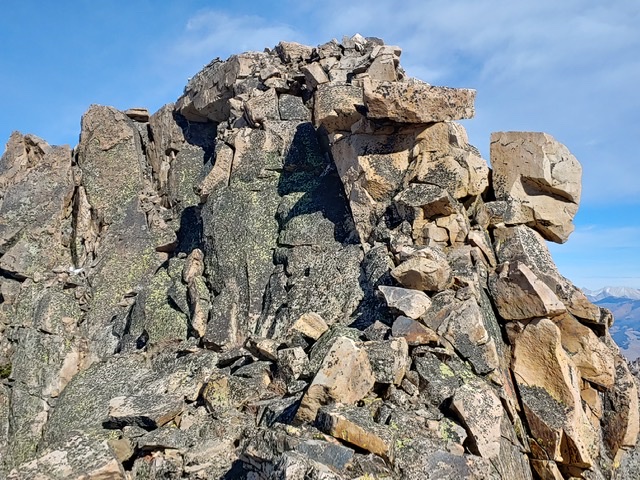 It might be possible to approach from the west via the trail from Imogene Lake to Edith Lake where the the trail crosses the peak’s west ridge. This would be a more direct route but it would involve desceding off the ridge a ways (I did not have time to investigate further with snow in October 2019). Since I did not find a cairn at the summit my guess is that approaching from the west is harder (there is a cairn on nearby Peak 9955).