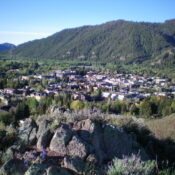 Penny Mountain is a small hill that sits just east of the Ketchum Cemetery along ID-75 at the north end of Ketchum. It is on private land (probably City of Ketchum land). There is a footpath coming up both the north ridge and the southeast ridge from Ketchum streets/residences. It certainly seems to be a publicly-accessible hill. USGS Sun Valley 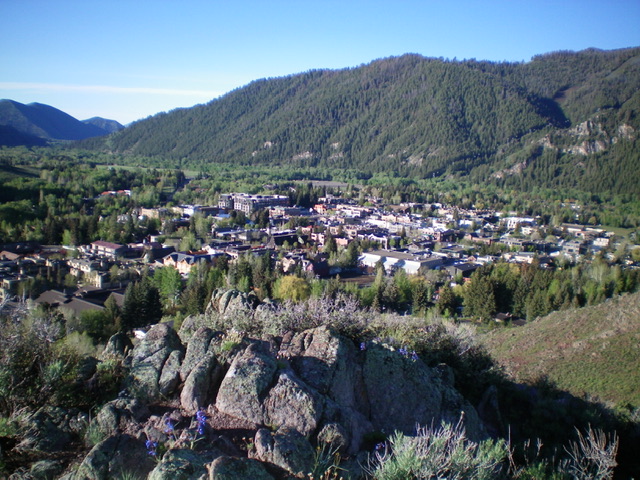 View of Ketchum from atop the rocky summit of Penny Mountain. Livingston Douglas Photo

From the parking area at the Ketchum Cemetery, walk to the north end of the cemetery and bushwhack north up onto a ridge. Follow the ridge briefly as it heads east then bushwhack southeast up through steep, thick sagebrush to the [false] west summit. From the west summit hump, descend east 35 feet to a saddle in easier sagebrush then climb east to the rocky, true summit of Penny Mountain. The summit offers a magnificent view of Ketchum. There is no summit cairn.

From the summit, descend back to the saddle between the true summit and the west summit. From the saddle, descend a sagebrush-filled dry gully northwest then west to return to the minor ridge at the north end of the cemetery. This descent route is a more direct route up the west face and avoids a climb of the false summit and I recommend it (or one of the aforementioned foot trails on the summit ridge) as a better ascent route than the one that I took.