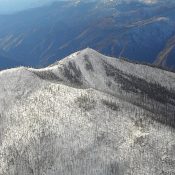 Pilot Peak has two summits and a long East-West summit ridge. It is located east of the South Fork Salmon River in the northern part of the Salmon River Mountains. A fire lookout sits on its [lower] West Summit. This summit is designated as the named peak. It has only 120 feet of prominence. FS-341 leads to the lookout from FS-340 which runs between Warren and Big Creek. Driving to this mountain is a long, arduous task once the roads have melted out. You can easily hike to the summit from FS-341. Class 2. USGS Wolf Fang Peak