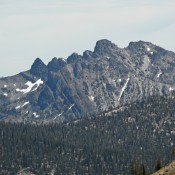 Climbing and access information for this peak (called “Pinnacles Peak” in the book) is on Page 121 of the book. John Platt climbed this seldom-visited peak in 2019. His trip report is linked below. Updated August 2019

The Pinnacles stands out from its neighbors with a rugged summit block, steep towers trending north from the summit, and 1,200 feet of prominence. I’ve climbed it twice and I highly recommend it. However, I suspect that the trail for the Missouri Ridge Route has deteriorated since my last ascent in 1995. I do not believe that any of the lower pinnacles have been climbed. USGS Edwardsburg 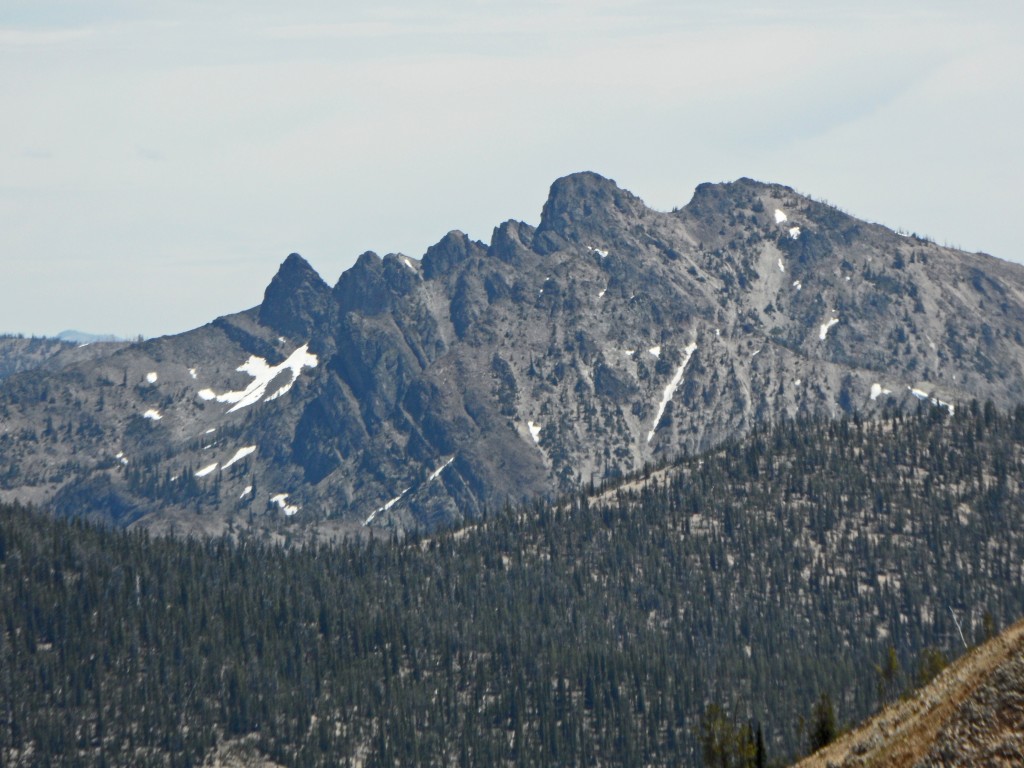 The Pinnacles as viewed from Crater Peak. The route climbs to the saddle between the two points on the right and the climbs the East Side of the summit block. John Platt Photo

The book lists two routes. Both use the Missouri Creek drainage. You can either follow the drainage to the base of the peak or the old Missouri Ridge Trail.

Take the Missouri Creek Trail up the valley until you reach a cabin. From this point, an old trail proceeds to the top of the Missouri Ridge, north of the peak. From the saddle between Missouri Ridge and The Pink, turn north and proceed up the ridge to the summit block. Climb the summit block on its East Side. The trail was in poor shape years ago. Originally a 4WD road or logging road, you will find plenty of downed trees on the route. Class 3. USGS Edwardsburg 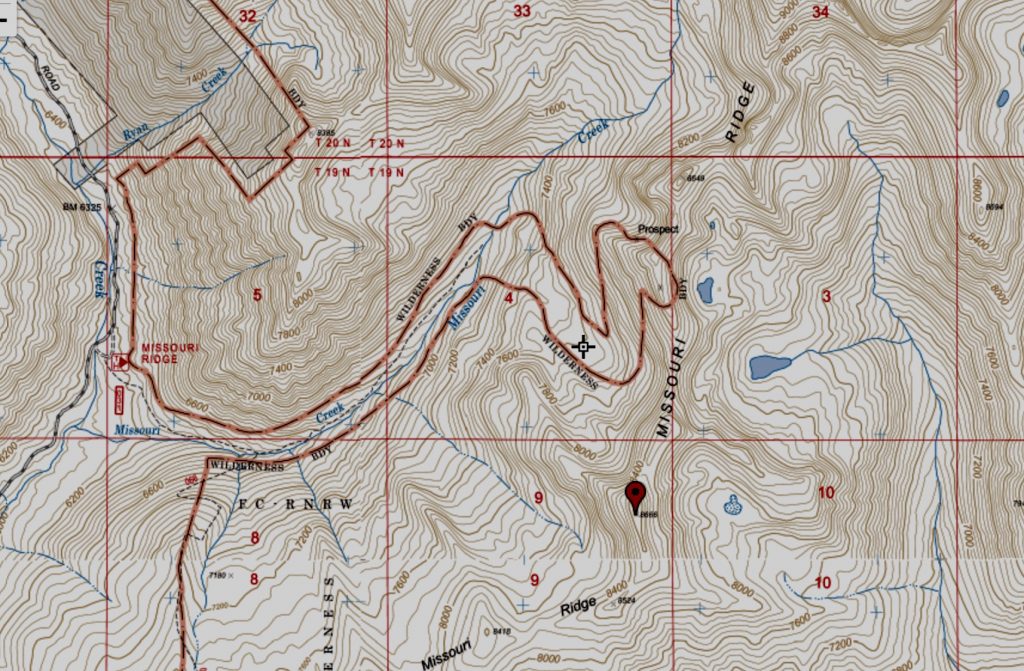 The Forest Service no longer shows the trail from the creek bottom to the ridge as a maintained trail. However, the boundary for the Frank Church River of No Return Wilderness excludes the trail corridor from the wilderness. Thus, this map gives you a good idea of where the trail runs. John Platt reports “We were able to fish a card out of the Pinnacles Peak register from a family that had used the Missouri Ridge Trail to fish the lakes on the other side. So I think the trail from the cabin is probably okay.”

The upper basin has burned since my last visit but is passable. 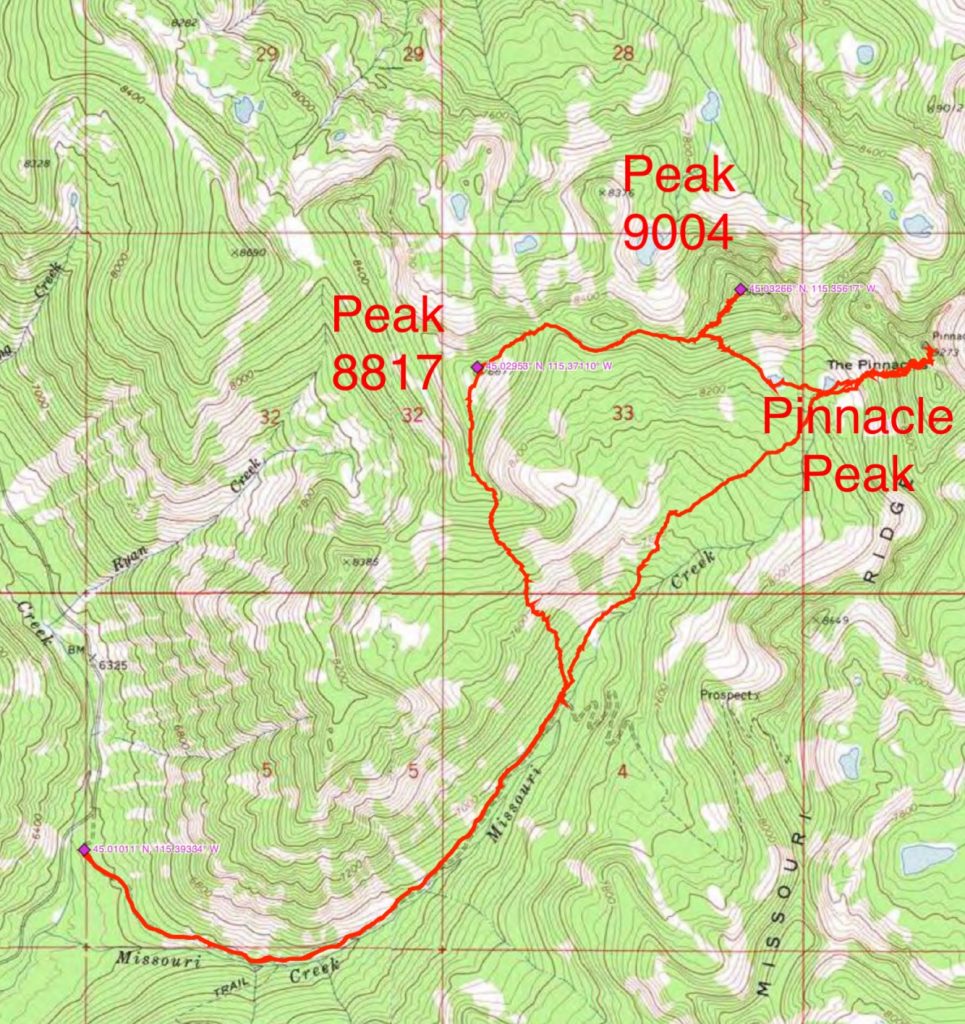 John Platt’s GPS track for exploring the Missouri Creek drainage and its peaks. 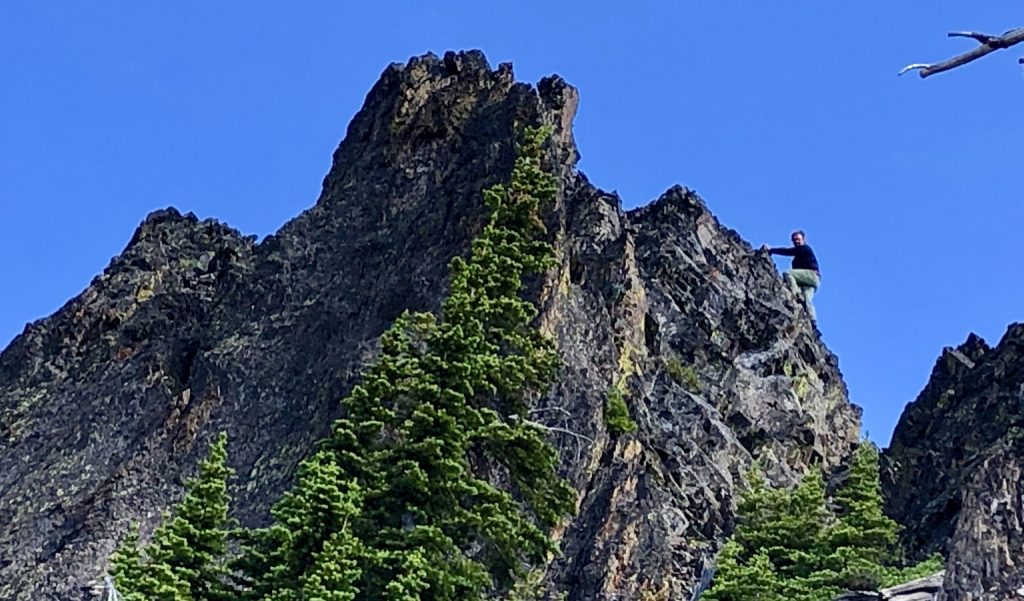 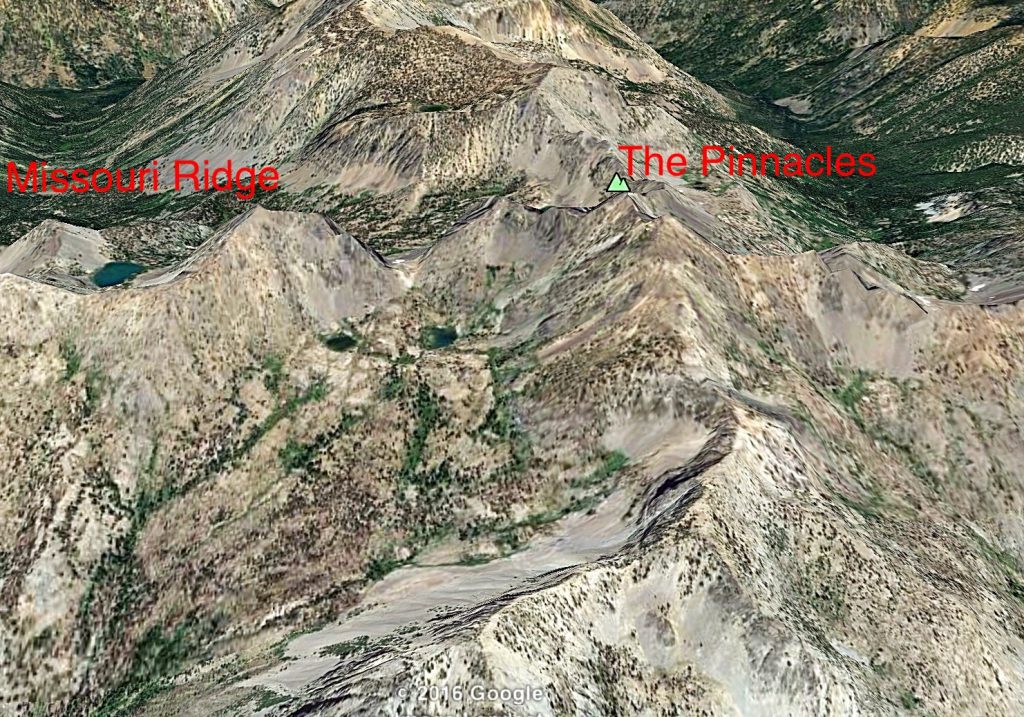 Missouri Ridge (left) and The Pinnacles (right) in this Google Earth image. The old trail ascends to the intervening saddle from Missouri Creek, which is the drainage behind Missouri Ridge. 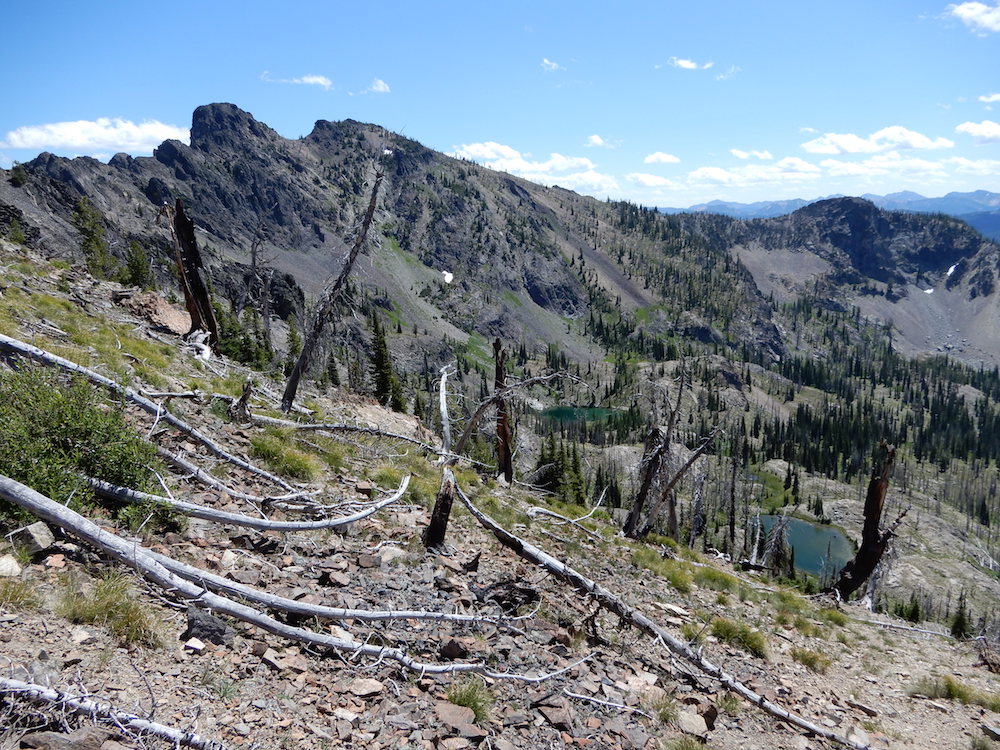 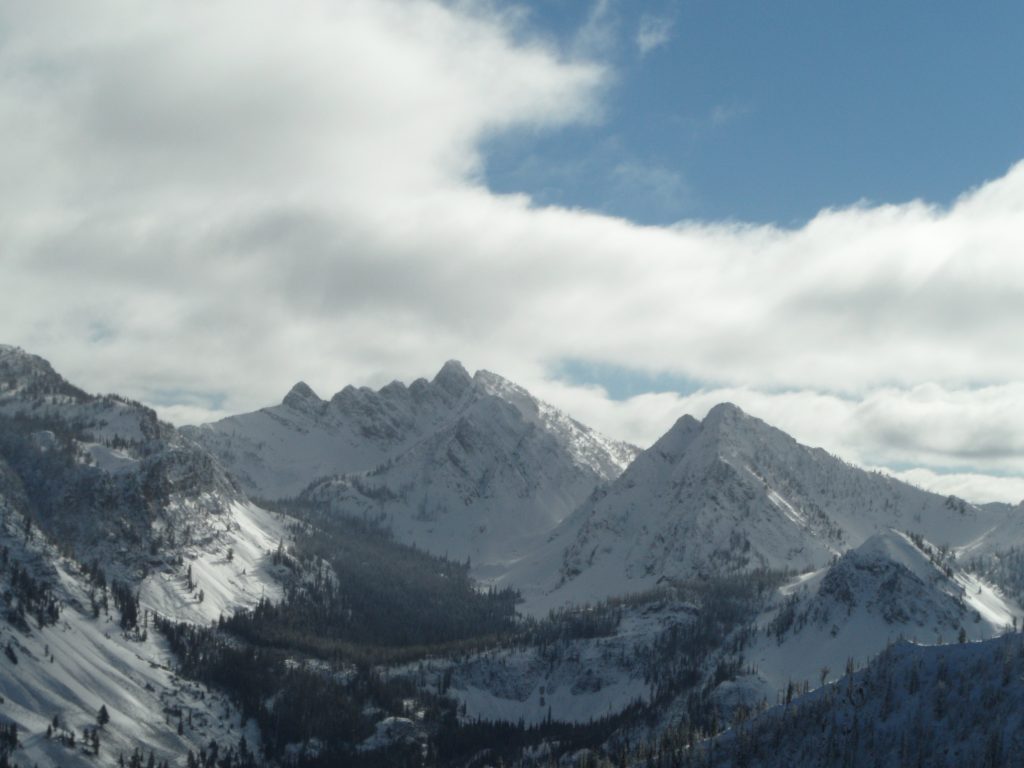 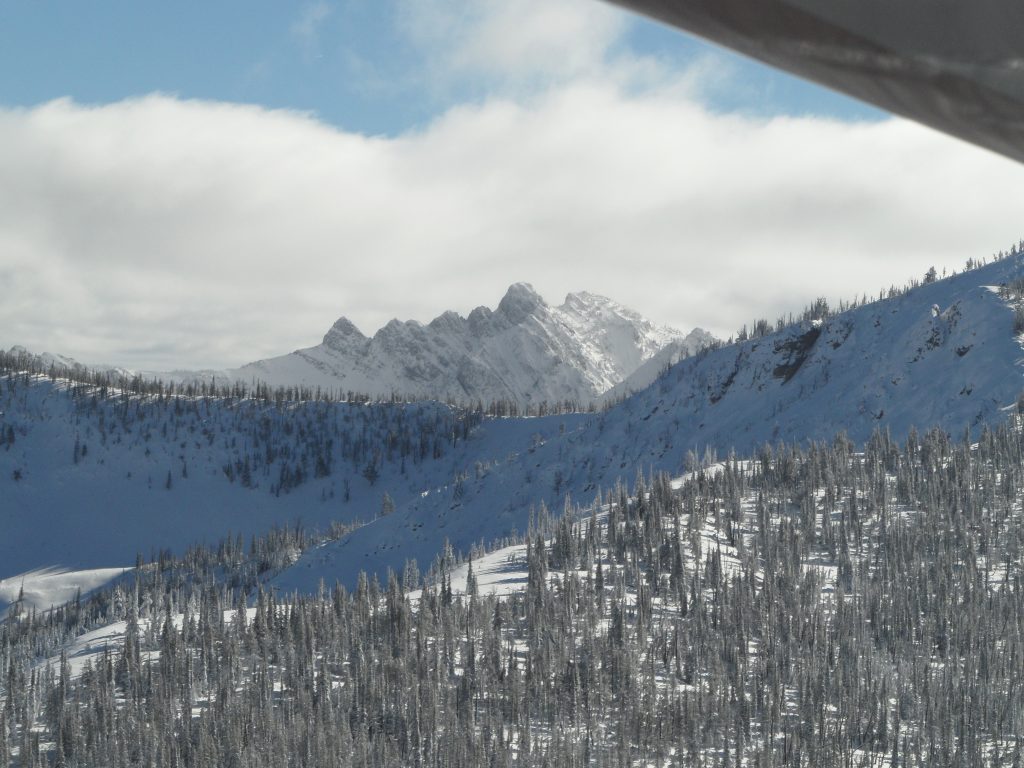