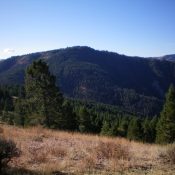 Climbing and access information for this peak is on Page 371 of the book. Published November 2020

Poker Peak is a somewhat elusive peak with three summits of almost-equal height. The south summit is the high point. FST-158 skirts the east side of the summit area and a short scramble is required to reach the top. Poker Peak towers over Palisades Reservoir to the east and Elk Creek to the west. The summit is open and offers a magnificent view of Palisades Reservoir. USGS Poker Peak 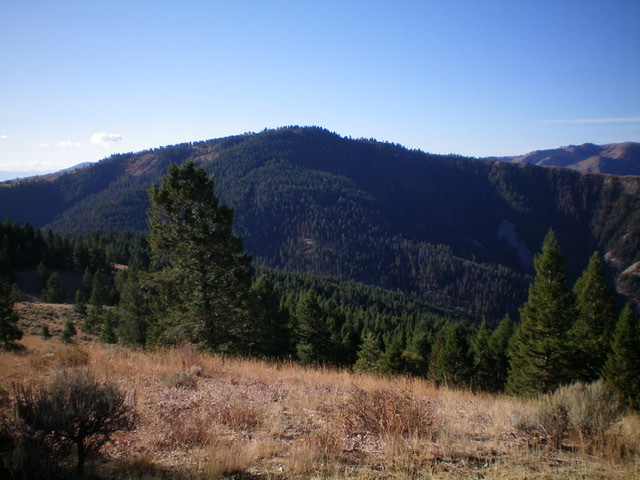 Poker Peak (forested in center) as viewed from the north. The summit sits about 3/4 mile back from the visible forest. Livingston Douglas

Same as for Peak 7940. This is the second leg of a two-peak adventure that begins at the Pine Creek trailhead.

From the 7,340-foot connecting saddle with Peak 7940, follow FST-158 south up into the forest. The trail is particularly difficult to follow in open, grassy areas that intersperse with the forested terrain. I lost the trail a few times (there are game trails to confuse you). When I finally lost the trail for good, I bushwhacked up the crest of the north ridge. It turns out that the trail leaves the ridge crest and skirts well below and left/east of it. Perhaps that is why I lost it because I did find the trail up near the summit.

The ridge bends right/southwest and climbs steeply up through the forest to reach a semi-open ridge hump. This is the north summit (Point 8411). I found a Forest Service benchmark atop this point but no summit cairn. The next hump south of Point 8411 appeared to be lower and it is (8,402 feet). Given that the elevation is awfully close to that of the true summit and there is no other higher point in sight, you might think that Point 8411 is the summit. But, alas, it is NOT.

Scramble south down to a saddle then up over Point 8402, the central summit. This is not the true summit, either. But now you can see the true summit to the south. Unfortunately, it is still ½ mile away. Bushwhack through more brush and sagebrush (not fun) as you did to reach Point 8411. Drop to another minor saddle and then begin the final upward climb. As you approach the summit, you find FST-158 to your left/east. But it doesn’t help much because it doesn’t lead up to the true/east summit. Continue south along the ridge crest through an unending “sea of sagebrush” to reach the “cairn-and-posts” summit of Poker Peak.

The true/east summit of Poker Peak has a large cairn, multiple fence posts, and a USGS benchmark in a nearby boulder. It offers a magnificent view of nearby Palisades Reservoir since the summit area is open. If you are here during the Fall hunting season as I was, you may pass a large hunter’s camp on the west side of the ridge crest near the final saddle in the nearby pine forest. 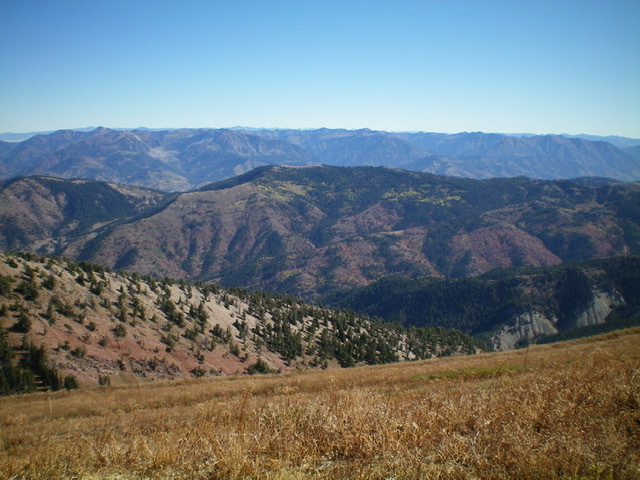 Poker Peak (mid-ground) as viewed from Big Elk Mountain to its southwest. The summit is in dead center. Livingston Douglas Photo

From the true/east summit, return north back to Point 8402. Continue north along the ridge then skirt the left/west side of Point 8411 to reach an obvious shoulder that heads west from it. This open shoulder is the beginning of the northwest ridge. Follow the ridge west then northwest as it descends to a narrow, flattish area at 7,850 feet. The exposure on the right/northeast side of this ridge area is breathtaking. The descent to this flattish area is a rather tedious affair thanks to thick brush, patches of dense forest, and narrow sections of ridge crest boulders/brush.

The ridge wiggles a bit as you descend from this flat section, heading west initially then curving right-ish/northwest farther down. At 6,900 feet the ridge splits. You can either go north-northwest here into a VERY STEEP forested section (cliffed in some areas) OR you can go left/west on gentler, open terrain to reach FSR-063/Bear Creek Road quicker. I chose the latter option. 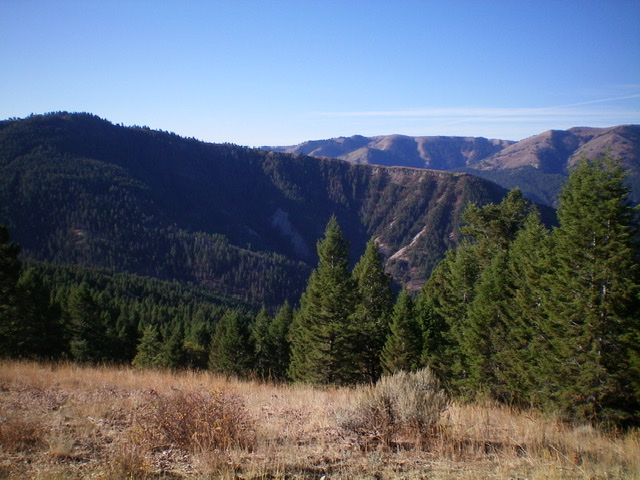 The upper half of the long, magnificent northwest ridge of Poker Peak (forested, mid-ground). The summit is behind the forest at far left. The ridge goes from upper left to lower right in the photo. This was my descent route. Livingston Douglas Photo

Stay to the left/south of the forest as much as possible as you descend this shoulder/spur. But you can’t avoid the forest entirely. The forested patches are just wicked with copious blowdown and thick brush. Very unpleasant yet it looked so EASY from a distance. When you approach the road, you realize that you have a problem. There is a good-sized creek (Elk Creek) between you and the road, with tall, thick willows to boot. Lacking sandals, I bushwhacked along the right/east side of Elk Creek in grass, thick brush, and wickedly steep sidehills to finally reach the bridge crossing of Elk Creek.

The road is now on the right/east side of Elk Creek and you can walk down it to your parked vehicle at the Pine Creek trailhead. From a distance, the northeast ridge of Poker Peak looked like a magnificent ridge to descend. However, looks are sometimes deceiving. This ridge turned out to be more of a nightmare with a rather punishing bushwhack along Elk Creek to boot. I would not do it again. Stick to FST-158/Poker Peak Trail. 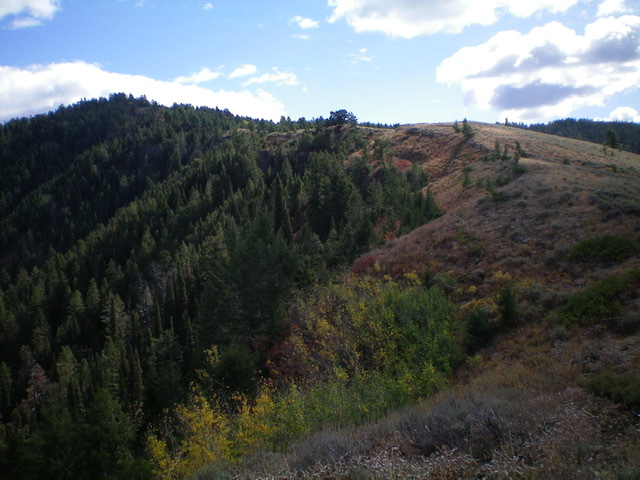 Looking up the upper section of the northwest ridge of Poker Peak. Livingston Douglas Photo 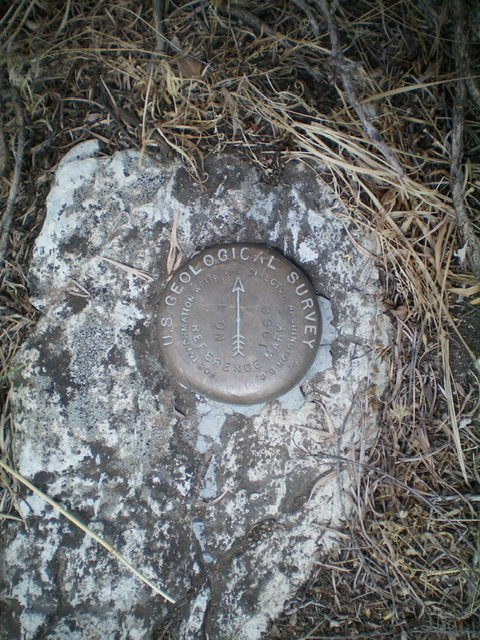 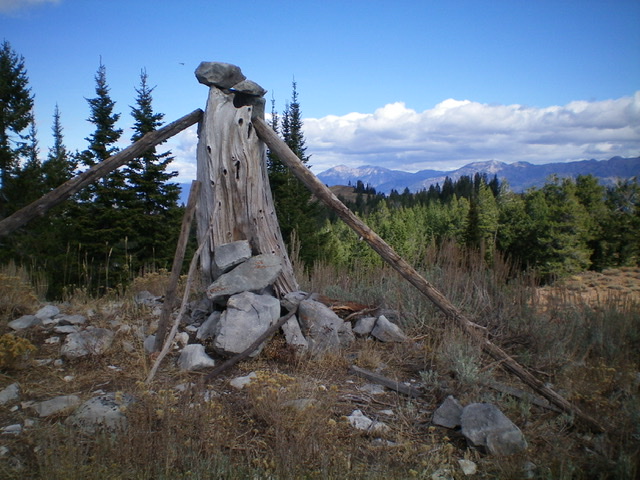 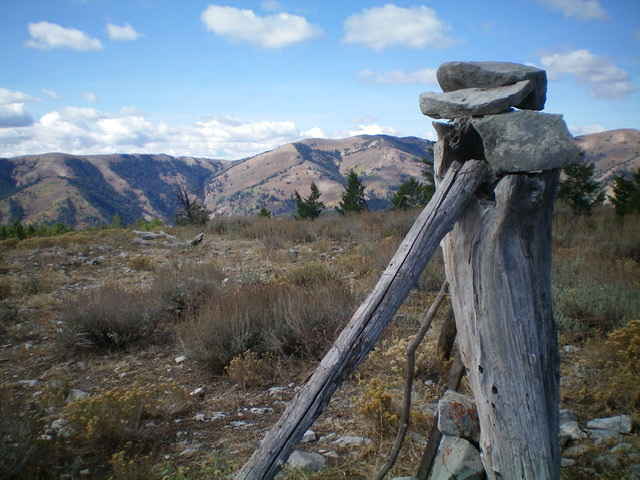 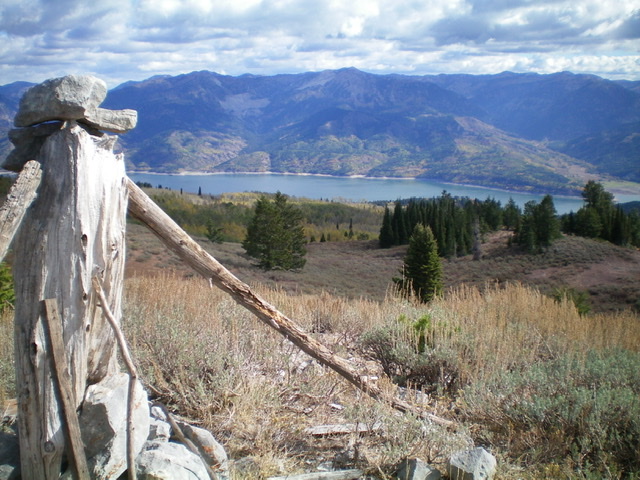 Palisades Reservoir as viewed from the summit of Poker Peak. Livingston Douglas Photo