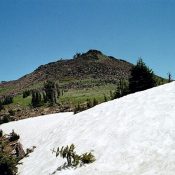 Located in the New Meadows Ranger District of the western Payette National Forest, Pollock Mountain is a far-flung member of the Seven Devils, being separated from most of the range by Rapid River Canyon. Pollock Mountain rises approximately 4,290 feet above Round Valley and the meandering upper Little Salmon River north of the town of New Meadows. A trail goes all the way to the top, but good boulder scrambling can be had up the South Buttress on blocky basalt. From the top, there are spectacular views of the Payette Mountains to the east, broad meadows and West Mountains to the south, and the Seven Devils to the north and west. The Wallowa Mountains are also visible farther west in Oregon. USGS Pollock Mountain 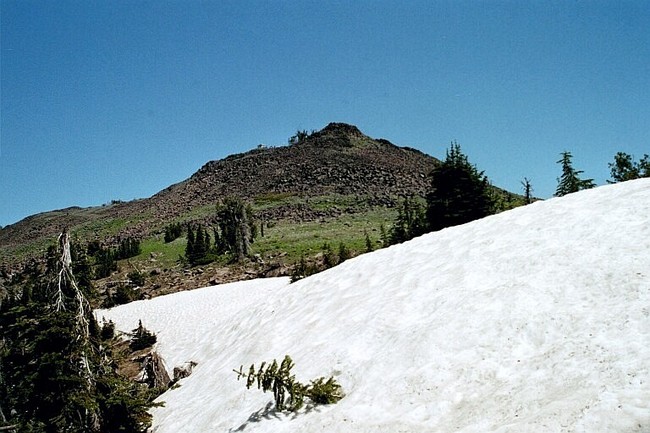 The approach to the summit of Pollock Mountain (July 2004). The trail ascends the left/west side or one can scramble up the boulders on the south end of the ridge. Mike Hays Photo

The mountain is formed largely of granite on the western edge of the Idaho Batholith but has a large basalt cap along the ¾-mile long, north-south running summit. Basalt is rare in the Seven Devils, having fallen off the sharply rising summits eons ago. The upper slopes are very open with stunted subalpine fir and whitebark pine. Most of the latter have died. The mid-slopes support open subalpine fir and spruce on loose gravel and sloughing soils. The subalpine community gives way below to spectacular old growth grand fir in a climax stage of succession. The isolated mountain top is very exposed and catches a lot of weather, so be prepared for anything.

There is a lookout on the south edge of the ridge. Fortunately due to its placement, one doesn’t see it over the large majority of the summit area. The lookout spotter is a very friendly guy. He will invite you inside, show you how to use the maps and equipment to spot smokes, and report them to the fire dispatch. I was lucky to help him sight a fire location, and then record and report it during our visit. He says this mountain gets about 15 visitors each Summer.

To reach Pollock Mountain, turn west off US-95 at Mile Marker 172 onto the Smokey Boulder Road/FSR-074. This point, where the gentle stream of the Little Salmon leaves the broad valley and spills into a waterfall-filled gorge, is about 15 minutes north of New Meadows and 30-40 minutes south of Riggins on US-95. Continue west on the Smokey Boulder Road for about 2.5 miles across the valley to the Payette National Forest Boundary. Keep right on FSR-074. After about 4 miles, park at the Pollock Mountain trailhead, just beyond where FSR-074 crosses to the west side of Boulder Creek. 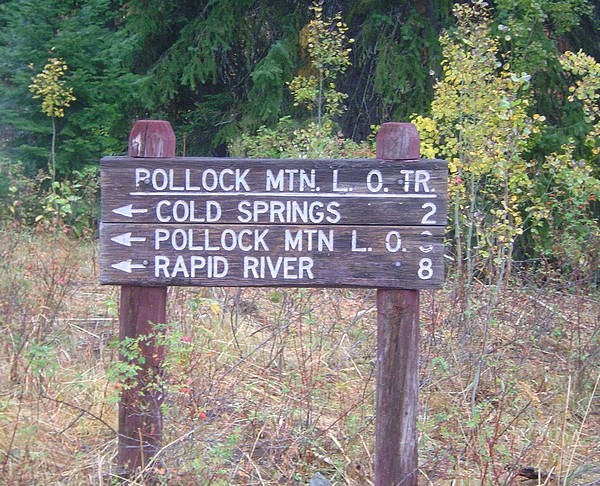 From this trailhead, it’s about a 2-mile hike on FST-179 to Chokecherry Flats. An alternate route to Chokecherry Flats is to continue on FSR-074 for 5 more miles to FSR-158. Turn right onto FSR-158 and continue approximately 8 miles to Chokecherry Flats where the road ends. This route cuts 2 miles off the hike, but adds 13 miles of driving. The final 8 miles on FS-158 are rugged and a 4WD vehicle is highly recommended. FSR-158 is open all Summer, but closes in the Fall for hunting season. Check at the Forest Service office for exact dates as they may change over time.

The trail beyond Chokecherry Flats cuts up through old growth forest, then open subalpine forests, for almost 2 miles to the ridgeline. Cold Springs, an excellent water source, is found on the trail a few hundred yards before the ridgeline. Turn right at the top and then keep right as the trail splits. Continue for nearly 1 more mile to the summit of Pollock Mountain. 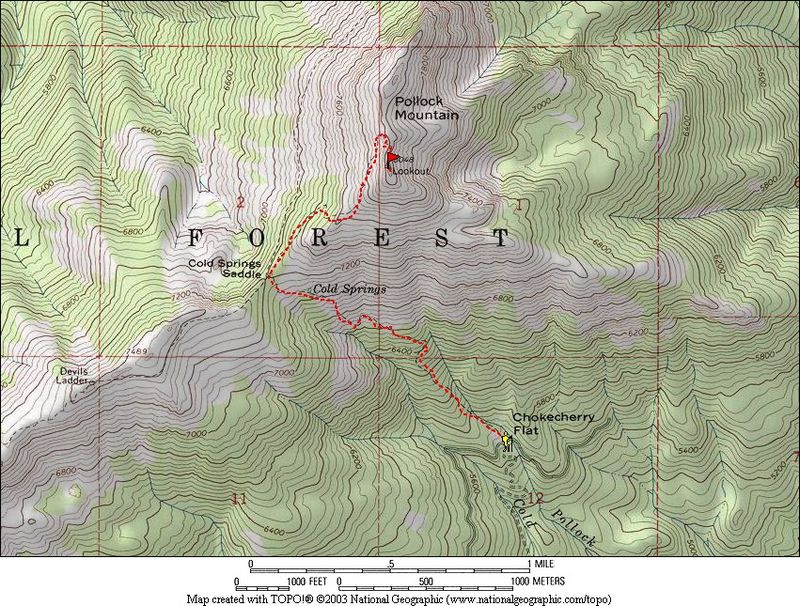