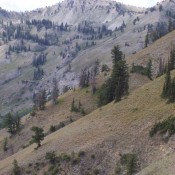 This peak is not in the book and its summit sits just across the Idaho/Wyoming border.

Rick Baugher provides the following: “Richards Peak/Peak 9660 straddles the Idaho/Wyoming border in the Snake River Range. Here are notes from my 6/20/99 visit. From the 6,120 foot trailhead in Blowout Canyon, hike over landslide rubble and faint trail through understory to Spaulding Basin. After a short descent into a gully, bushwhack up the West Slope to the summit of Richards Peak.” USGS Mount Baird 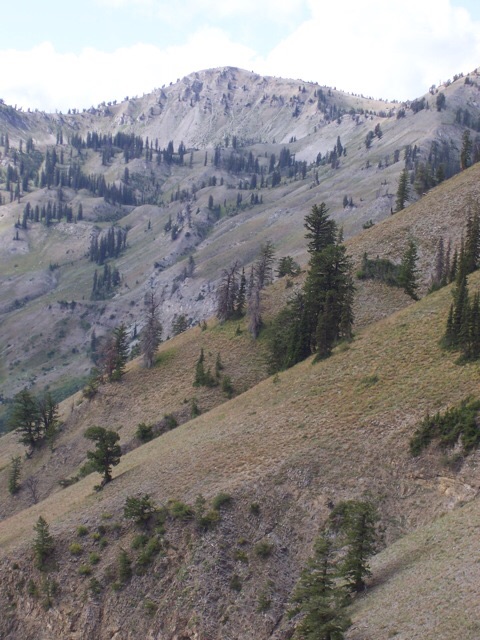 Highway travelers headed to Palisades Reservoir from Idaho or Star Valley, Wyoming, get a good view of Richards Peak. This is a more remote backside view from inside the Snake River Range (9/3/08). Rick Baugher Photo

I am not positive about the which of two Richards brothers the peak was named after. Rick Baugher, who has written a history of Federal government surveyors who worked in Idaho, reports the peak’s name honors Alonzo V. Richards, a Civil War veteran from Wisconsin. According to Lucia McCreery, who has reviewed historical diary of William A. Richards, reports the name Mount Richards appeared in the 1874 diary of William A. Richards, brother of A.V. Richards. What is clear that one of the Richards contracted with the U.S. General Land Office to survey Wyoming’s western boundary in 1874. It is also clear that that this peak is the highest and most rugged summit found along the nearly 280-mile boundary line.

While most of the ascent lies within Bonneville County, Idaho, the highest point of the mountain is in Lincoln County, Wyoming, about 300 yards east of the Richards Survey Mile Marker 160. The brass USGS benchmark tablet on the summit is elevation stamped 9,652 feet, but there is no station name nor date. Placement was probably made by topographer Lee Morrison while surveying the Irwin 30-minute quadrangle in 1930-1932. From the vantage point of this summit, Alonzo Richards would have noted the Grand Teton’s true position inside Wyoming, and not in the Idaho Territory, as a previous survey had shown. 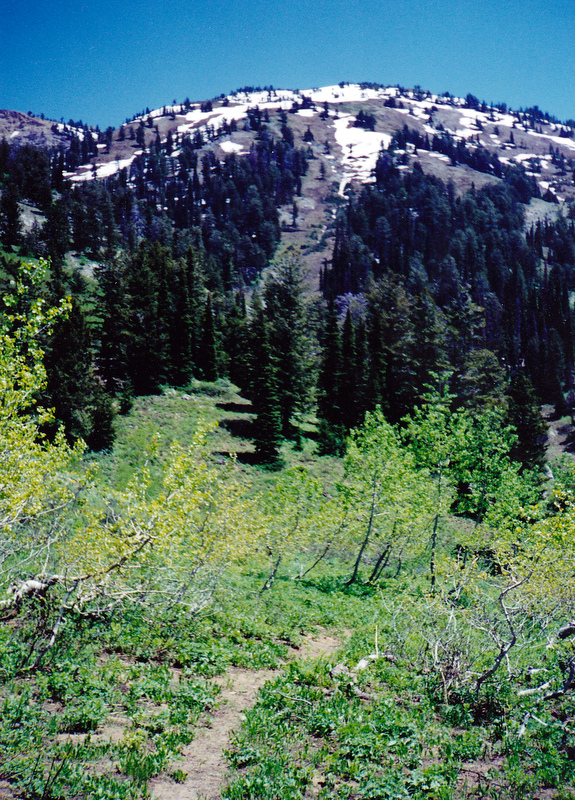 The view looking east from Spaulding Basin to Richards Peak (6/20/99). The Blowout Canyon-Spring Run Trail is the closest a trail gets to the peak. Bushwhacking in the Snake River Range is best done in late Spring or in Fall. Rick Baugher Photo and Commentary 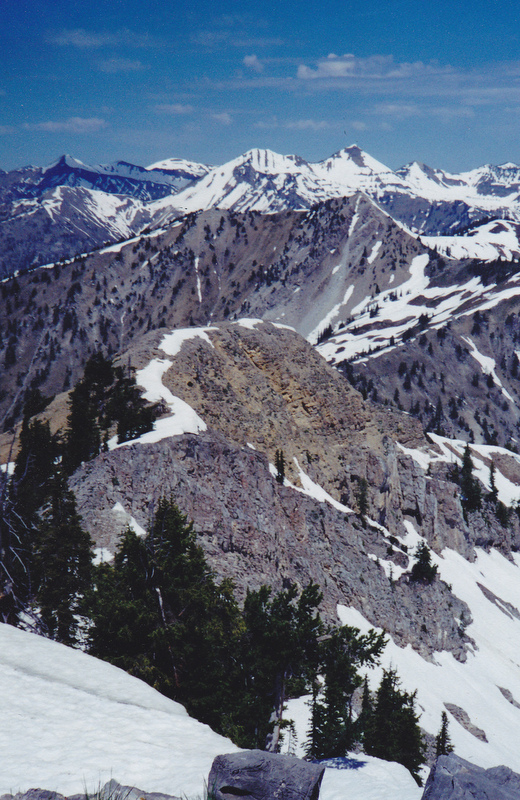 The view looking northwest from Richards Peak to Mount Baird and Elkhorn Peak. Needles Peak is in the mid-ground. Rick Baugher Photo 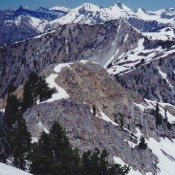