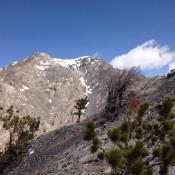 Climbing and access information for this peak is on Pages 311-312 of the book. On this page, you will find a route information for (1) the Middle Canyon route (2) the Cedar Canyon route and (3) Livingston Douglas’ west gully/northwest shoulder oute. Be sure to use the links below to check out Rick Baugher’s 1980 trip report, John Platt’s 2011 trip report, and Larry Prescott’s 2014 trip report. Updated December 2019

Saddle Mountain, a dominating massif, is located at the south end of the Lemhi Range. Its location makes it highly visible from many spots on the Snake River Plain. As a result, over the last ten years, the peak has become a highly-sought prize for serious peakbaggers. This peak should not be underestimated. There are no easy routes on this mountain. All of the routes are long with big elevation gains as well as serious route-finding problems. USGS Tyler Peak

After looking at this peak for 36 years, I climbed it on May 17, 2014 with Andrew Chiles. We climbed it via the Middle Canyon, southeast ridge route pioneered by John Platt, Sean Duffy and Michael Pelton in 2011. See John’s trip report. 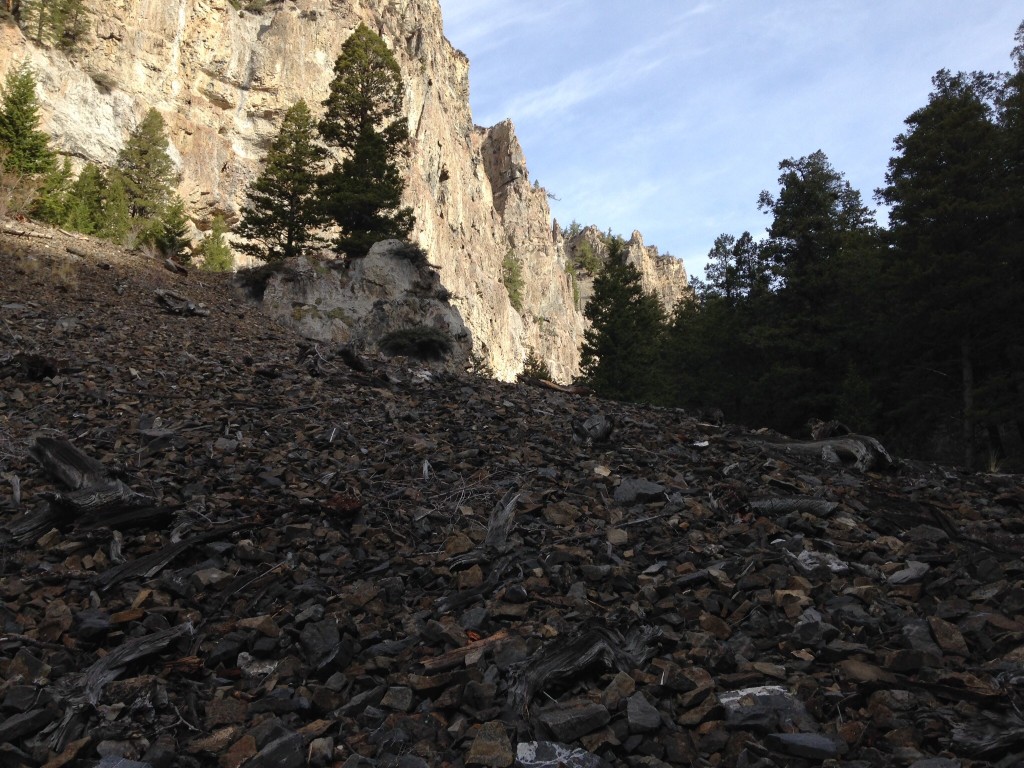 The route has a good trail to 7,100 feet as it follows a route used by early pioneers who cut trees and dragged them out of the canyon with horses. 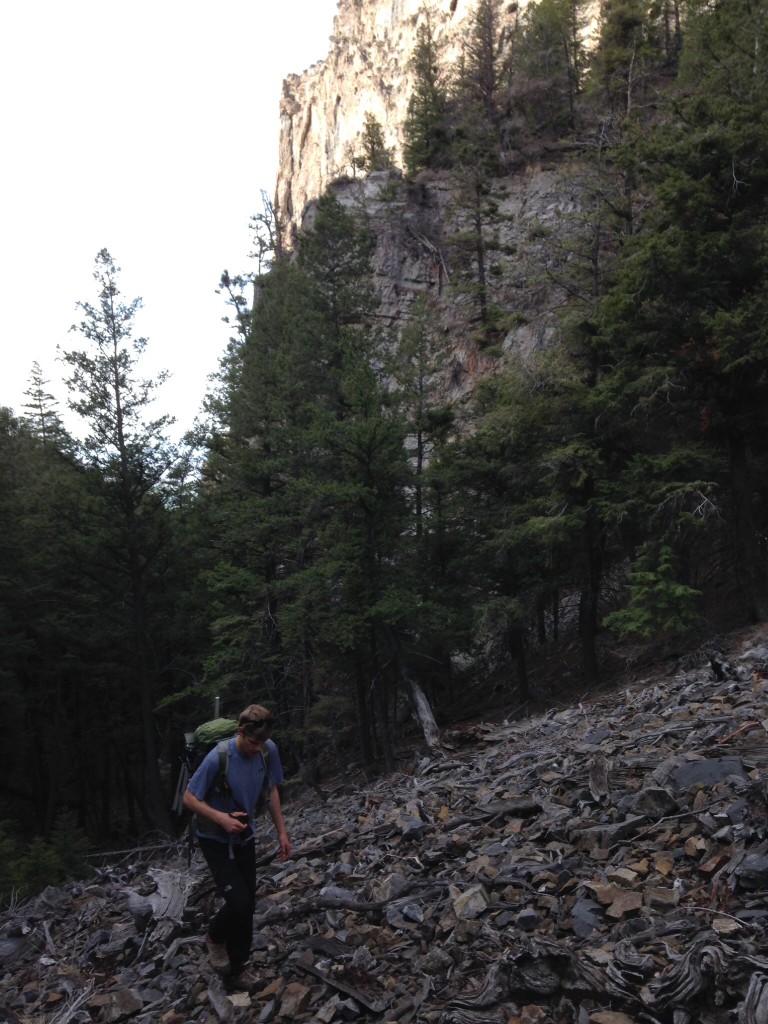 Between 7,100 feet and 8,600 feet, the route follows an elk trail in places, but more often than not the route is obscured by deadfall and brush. For me, this section was the crux of the climb. 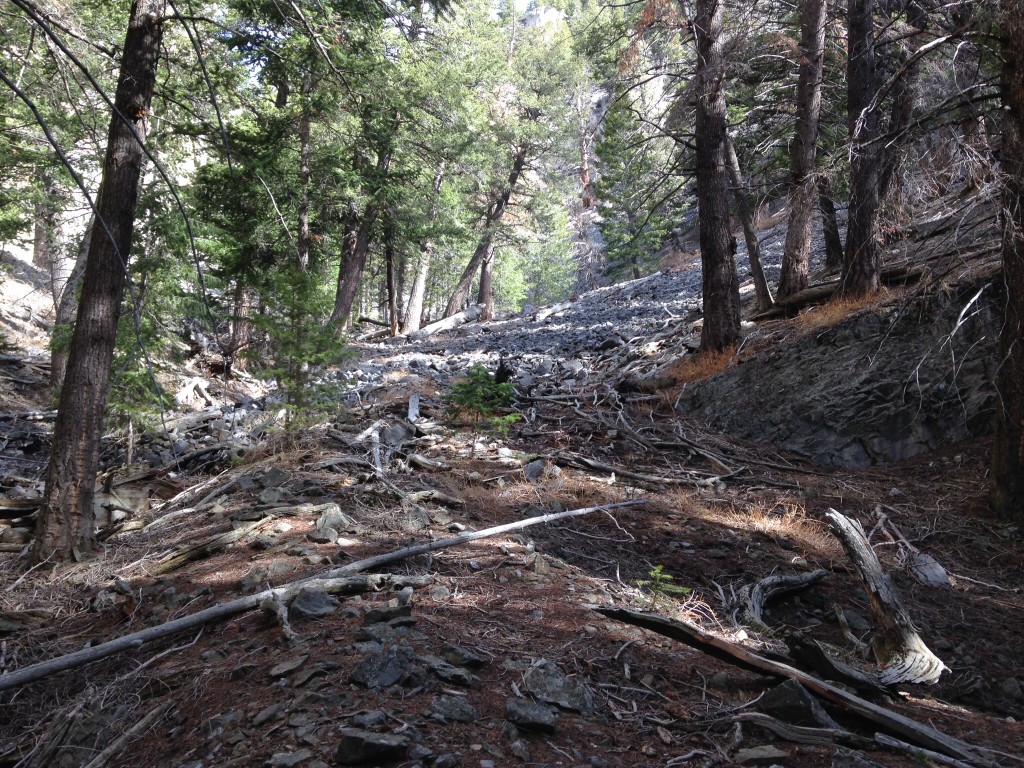 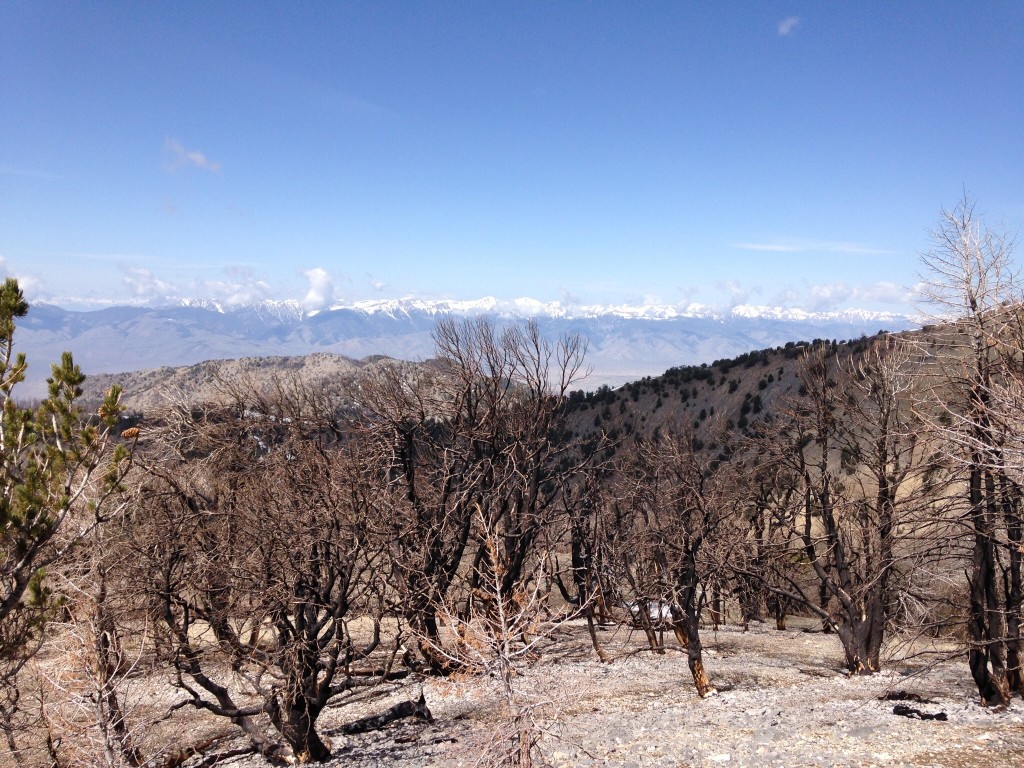 At 8,600 feet, the route leaves the canyon and climbs a broad east-northeast-trending ridge toward Point 10248. A recent forest fire has burned many of the trees on this ridge. 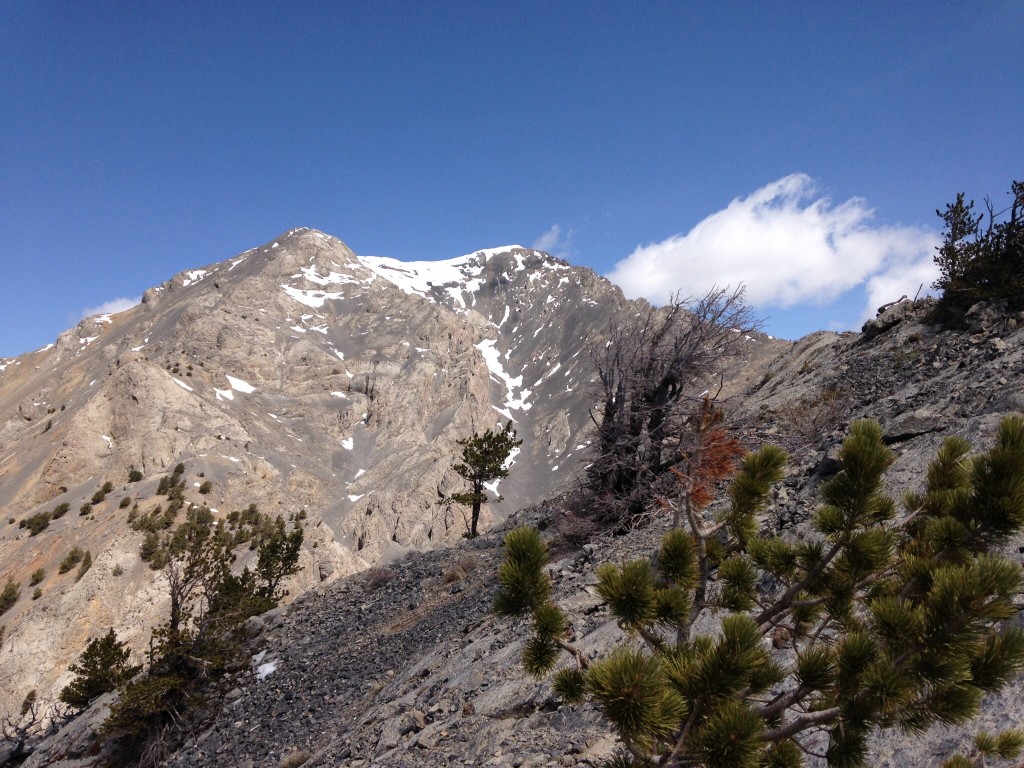 As you near tree line, you get your first good view of the summit. 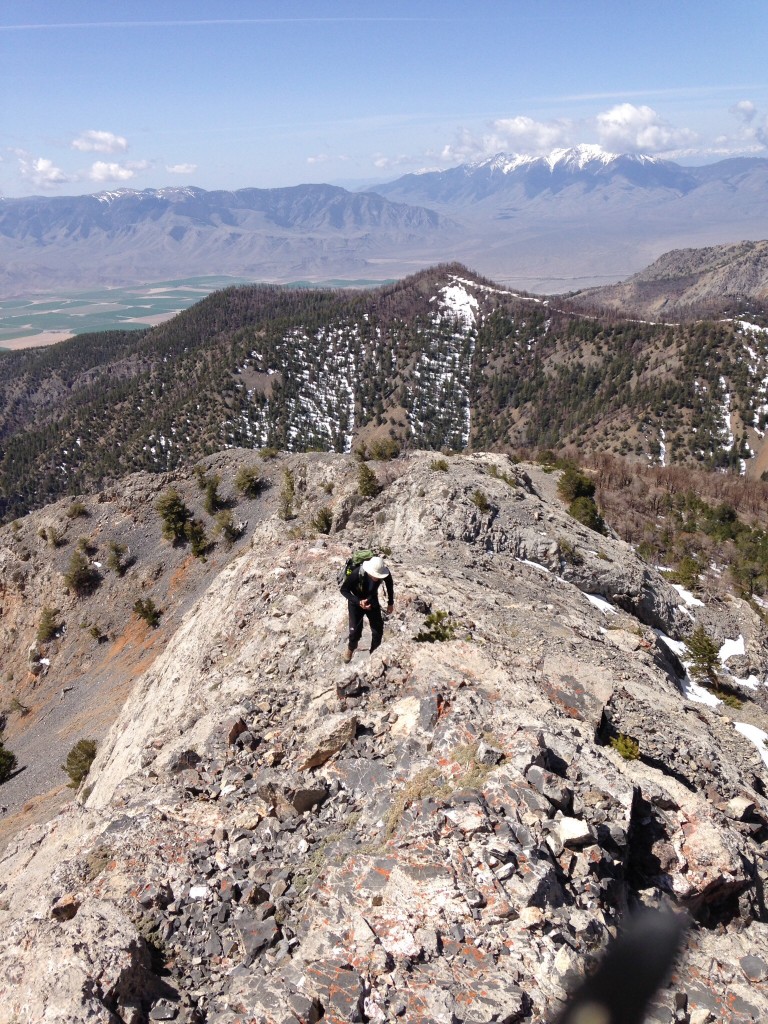 The ridge narrows above tree line and climbs steadily to Point 10248. Roughly 50 feet below the top, you can traverse over to Saddle Mountain’s southeast ridge. 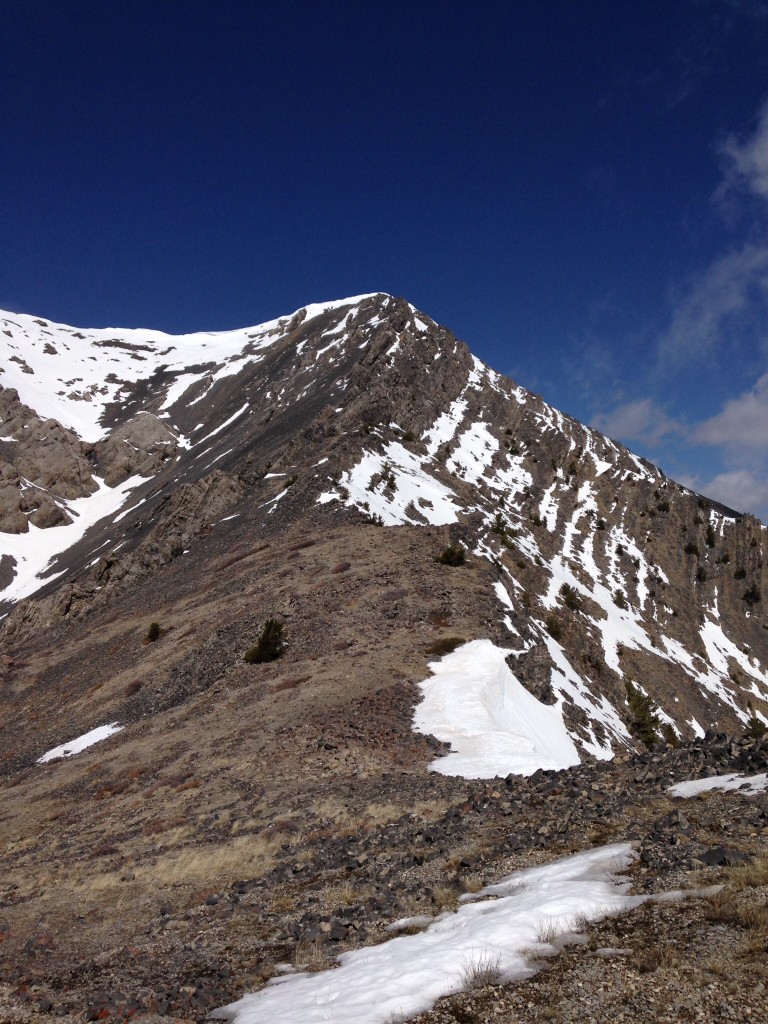 The southeast ridge of Saddle Mountain is covered with right-leaning towers. All of these towers can be bypassed on the left by following a fairly distinct goat trail. 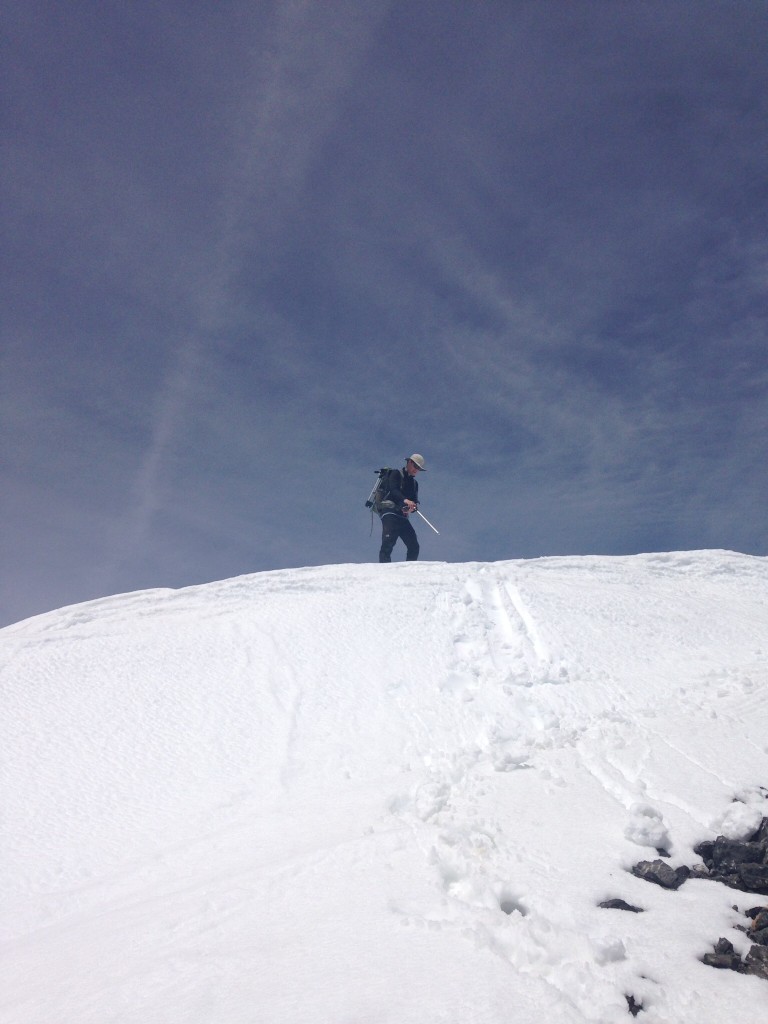 The summit of Saddle Mountain was capped by a big snow pile, which was the only significant snow on the route. 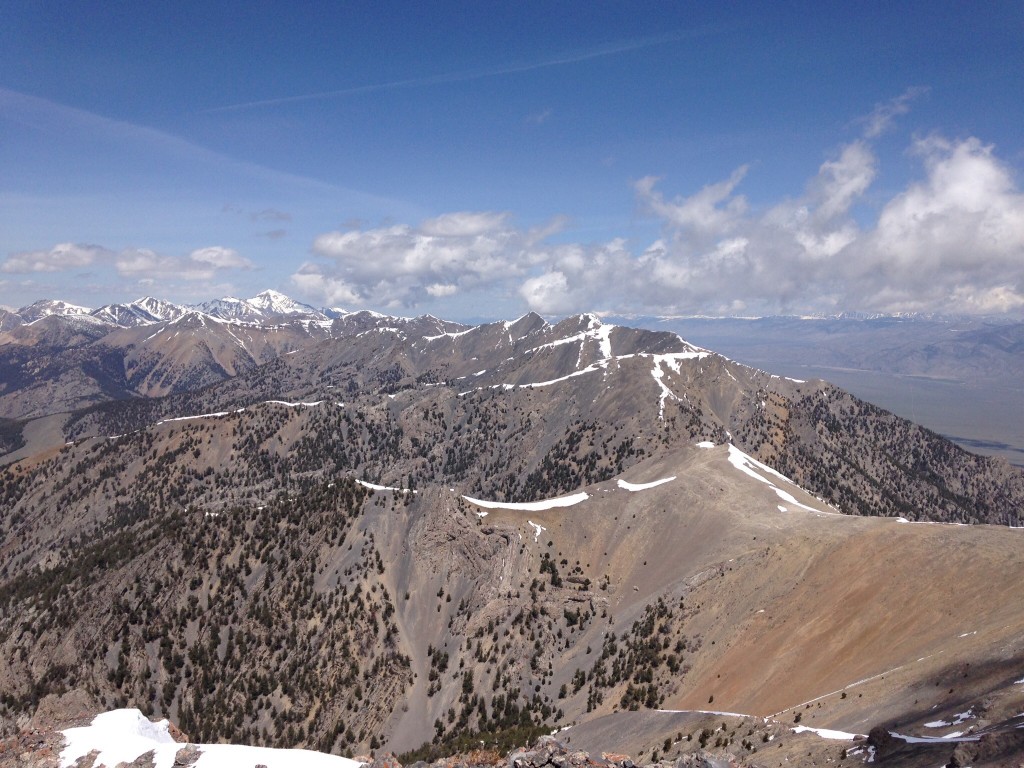 Looking north from Saddle Mountain. Diamond Peak is the big peak in the center of the photo. Mount Hoopes and Tyler Peak are the two triangular-shaped peaks to the right. The peaks to the left are the summits near the Uncle Ike drainage.

Cedar Canyon is perhaps the best approach to the summit from the east. Larry’s directions to reach Cedar Canyon are as follows:

“To get there, drive northwest on ID-28 toward Salmon. Turn off on a gravel road marked with a small sign identifying Bartel Canyon. Follow the road for some distance until you reach the foothills of Bartel Canyon and then turn left to access the southern canyons. The roads leading into the Lemhis are rough.” 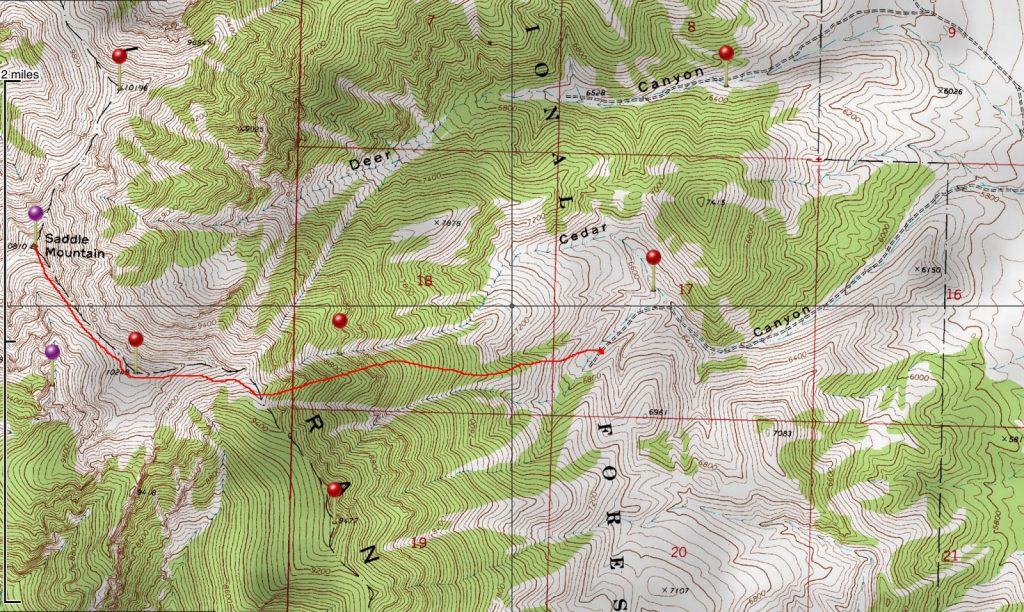 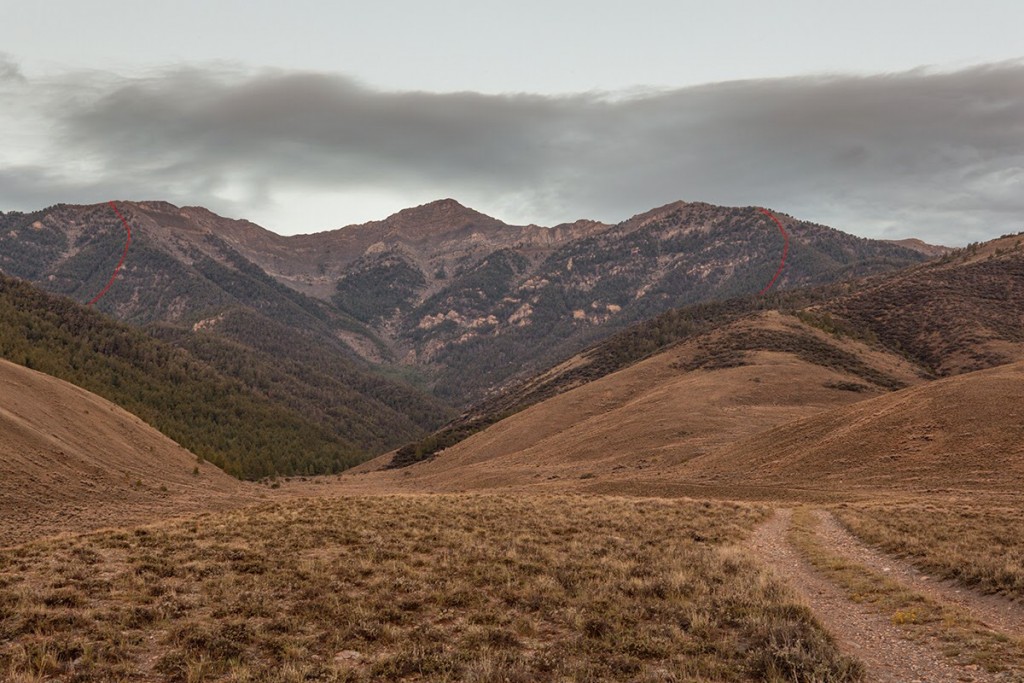 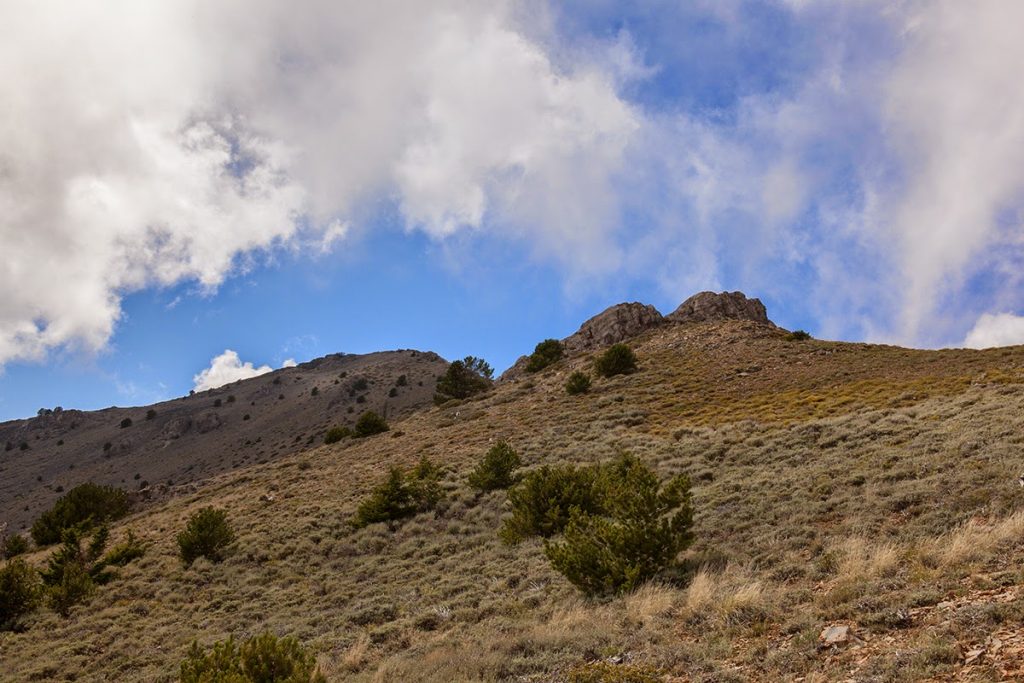 See Larry Prescott’s trip report for the alternative routes. Larry’s trip report is filled with beautiful photos of three routes on this peak, including the Middle Canyon route. 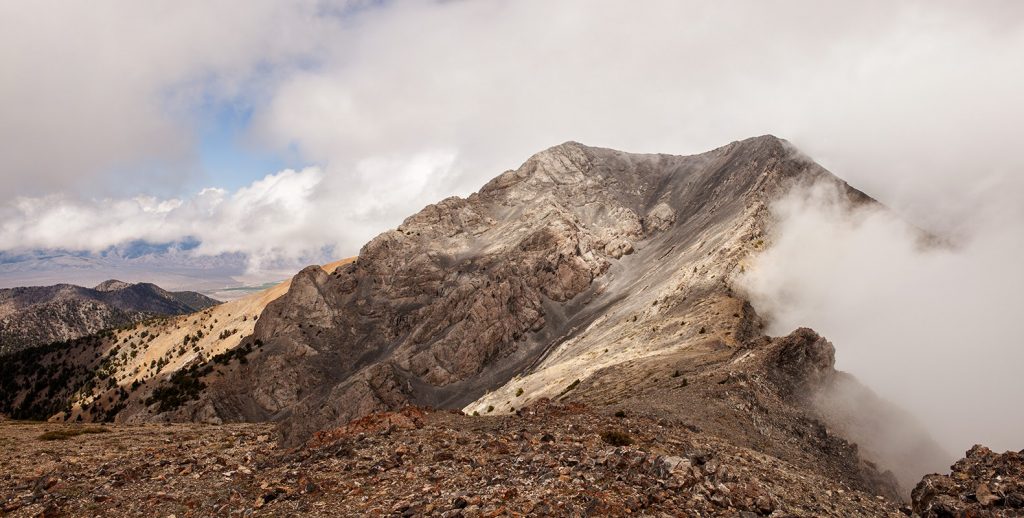 The Cedar Canyon route reaches the crest south of the summit, leaving a nice ridge walk to finish the peak. Larry Prescott Photo

South Creek Road is located 7.6 miles north of Howe on the [paved] Little Lost River Highway. It is unsigned. Turn right/east onto South Creek Road. At 1.9 miles, go left/north at an unsigned junction just before the road crosses a cattle gate. The road now becomes a rutted 2-track jeep road and follows the left/west side of a cattle fence.

The South Creek Trail is overgrown, poorly maintained, and is not “hiker friendly.” It crosses South Creek numerous times in thick trees/brush with no footbridges. The creek crossings can be done without fording the creek but it’s not always easy. At the least, this trail is tedious and time consuming. I don’t recommend it but, in this canyon, you have no choice. It is the ONLY trail here.

There is a total of sixteen (16) creek crossings, none of them with a footbridge or anything else to help you across South Creek. It is RIDICULOUS. It is a disgrace. The Challis National Forest map shows NONE of these creek crossings. The ATV trail/old road goes much farther up the canyon than either the USGS topo map or the Challis National Forest map indicate. It goes all the way to about 7,650 feet and ends in a feeder drainage on the east side of Peak 8923.

Hike up the 2-track road until it reaches the forest. Leave the road here and do a diagonal descent east into the drainage of the west gully. The side-hilling and blowdown here are not fun but you will find some game trails to help. This gully is almost always dry. Bushwhack up the gully, staying on a shoulder on the south side of the center of the gully. Keep the gully in sight because, farther up, there are multiple side gullies to confuse you. About a mile up the gully, you reach an area of steep cliffs on the north side of the gully. The shoulder disappears here and you must follow the center of the gully from here onward. Early on, the gully heads southeast. It then bends left/east at the cliffs and, soon after, bends even more left/northeast.

The forest ends (temporarily) at 8,650 feet and you have some great visuals of the gullies and ridges/shoulders on the northwest side of Saddle Mountain. You can even see the summit and the long north ridge from here. The gully is now heading east.  The gully forks at this point with a [wide] side gully heading right/southeast and the [narrower] main gully heading left/northeast. Stay in the main gully here and follow it left/northeast.

The forested northwest shoulder lies directly in front of you and is obvious. Immediately after passing the fork in the gully, leave the main gully and climb steeply east through thick pines to reach the crest of the northwest shoulder. This is a Class 3 climb through thick forest, downed timber, and boulders/talus. You will be delighted to reach the ridge crest. The slope eases here and the terrain is much less tedious. Follow the ridge crest southeast to quickly reach tree line.

The terrain is now mostly a talus/scree mix with some rocky outcrops to skirt or climb over (Class 3). After a final steep section of ridge rock/boulders, you reach the north ridge. There were still quite a few areas of snow on the pockets of the north ridge, so getting to the summit wasn’t going to be easy. Just below the summit was a large snowfield/cornice awaiting me. I had no ice axe with me. This was supposed to be a snow-free climb. Oops.

Scramble up the ridge crest, moving to the right/west side to avoid lingering snowfields. Just below the summit, do a lateral crossing of scree (or a snowfield) to reach the top of the northwest ridge. Follow that ridge for the final 20 vertical feet on good rock to reach the surprisingly small summit area. There are two large summit cairns on top of Saddle Mountain. Thankfully, the northeast summit (where you are standing) is the high point. 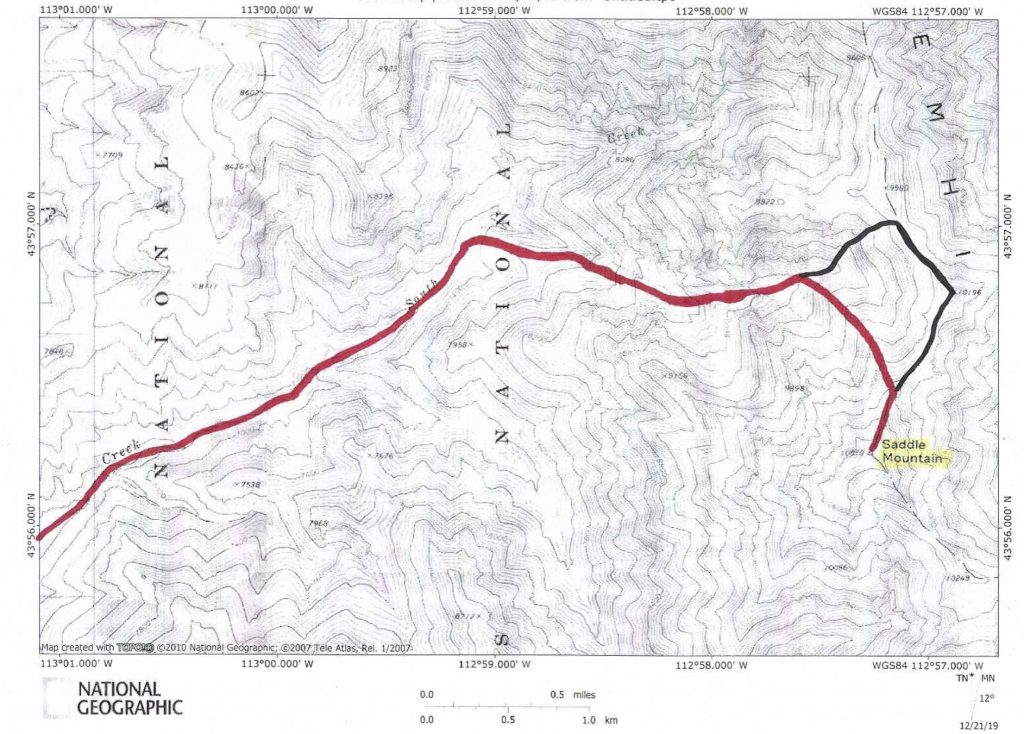 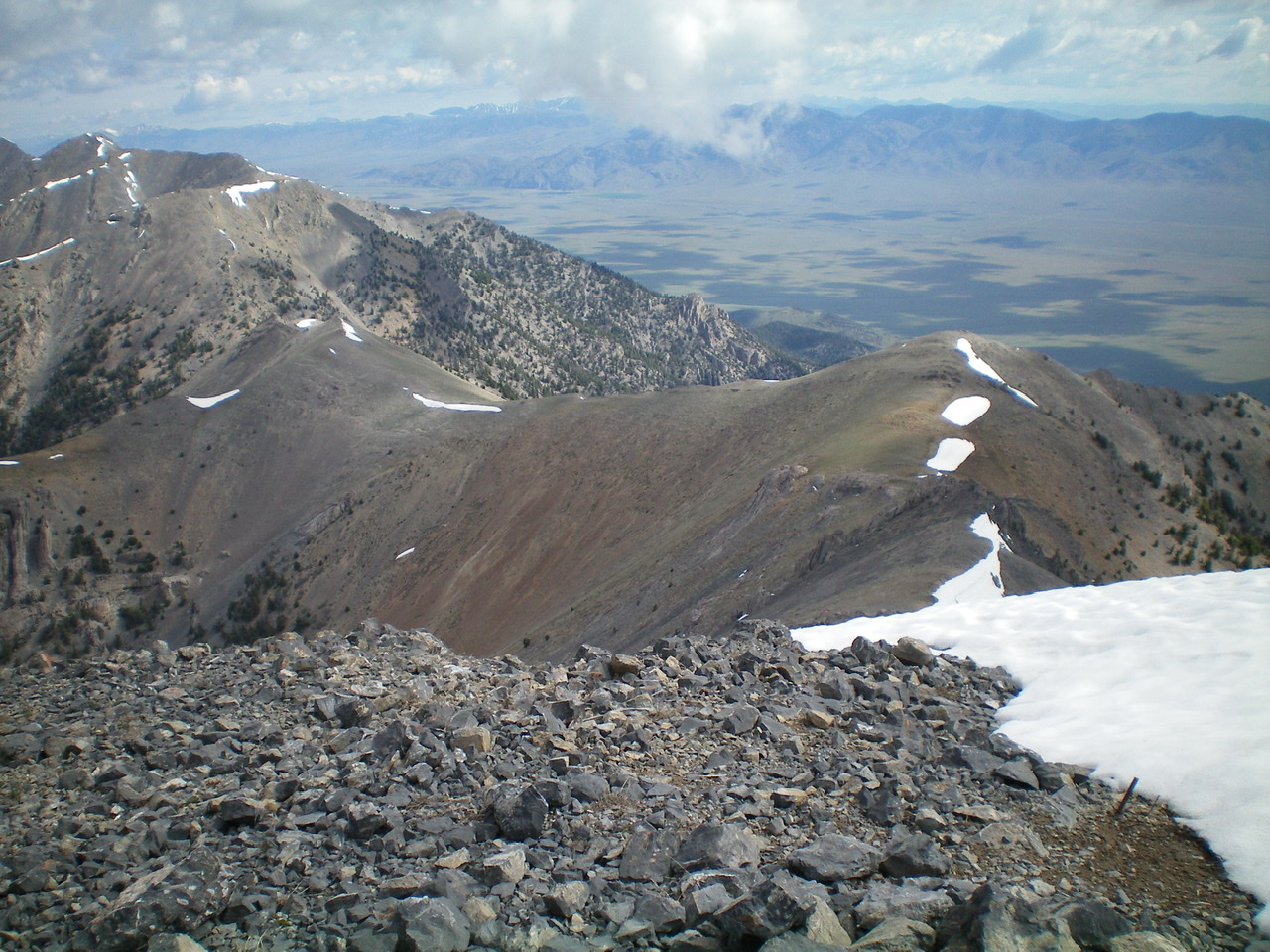 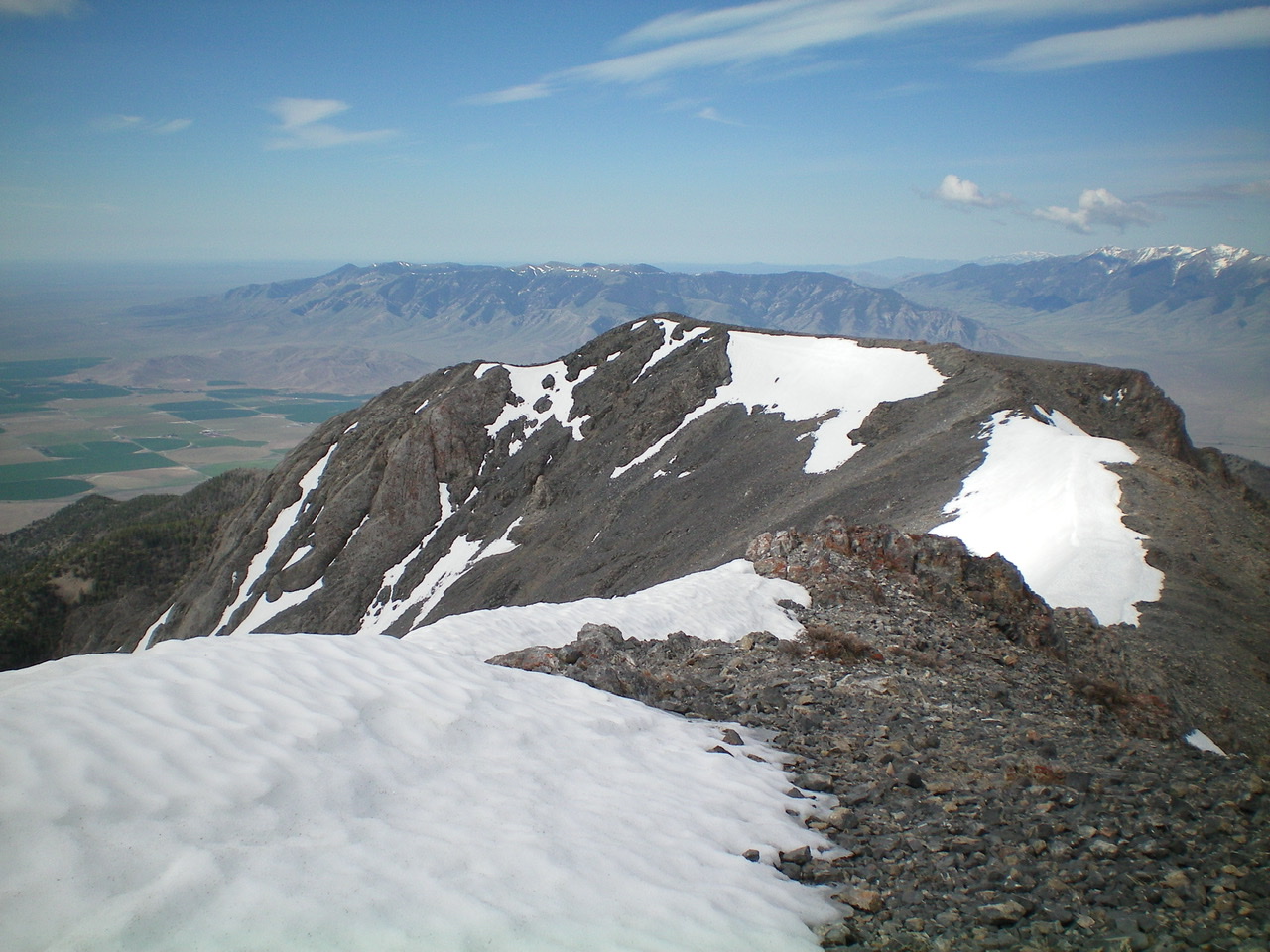 The summit ridge of Saddle Mountain, as viewed from the northeast summit. The [lower] southwest summit is in dead center. Livingston Douglas Photo 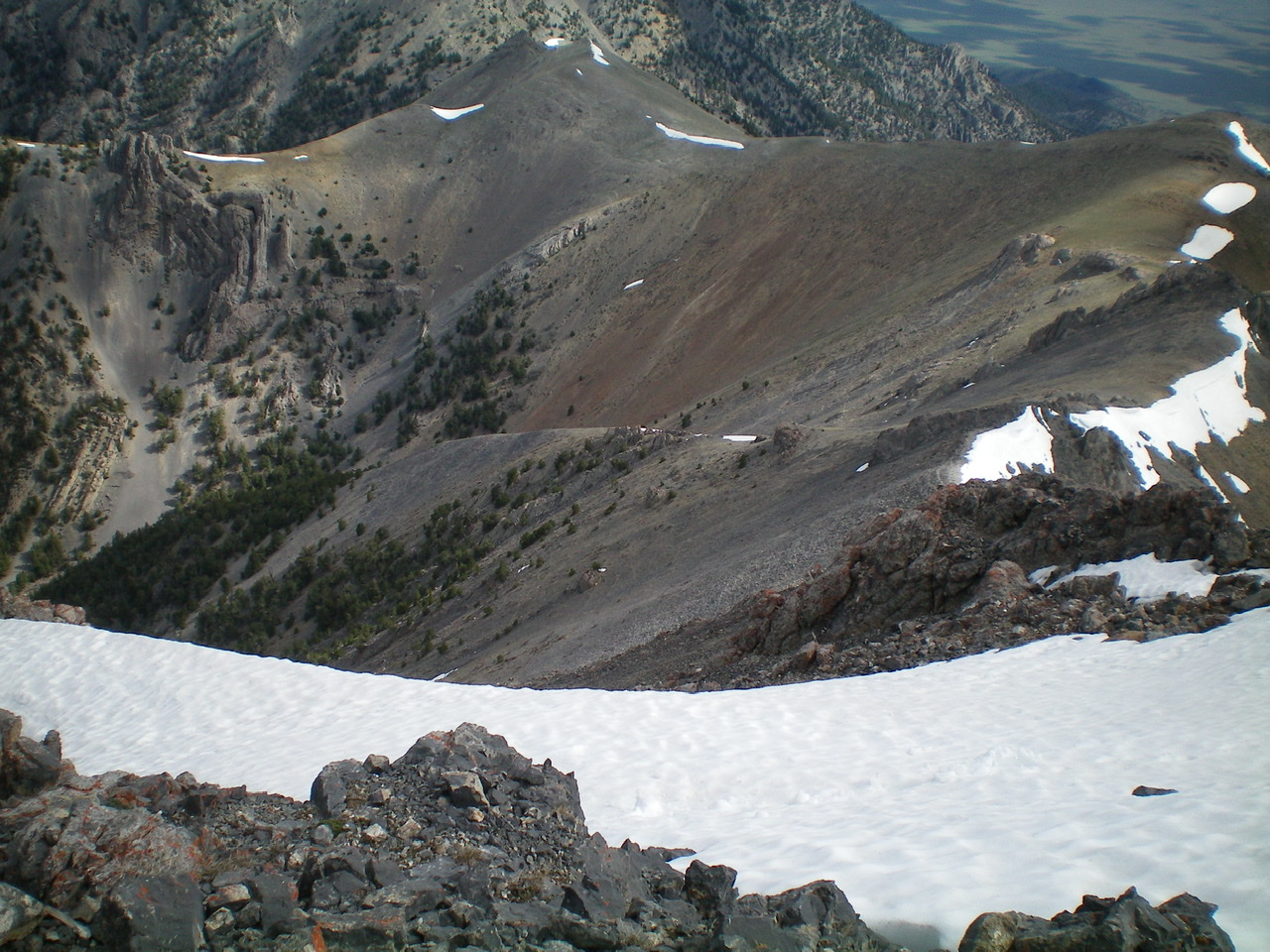 The northwest shoulder of Saddle Mountain as viewed from the summit. The shoulder is in dead center of the photo and bends leftward to descend to the west gully. Livingston Douglas Photo 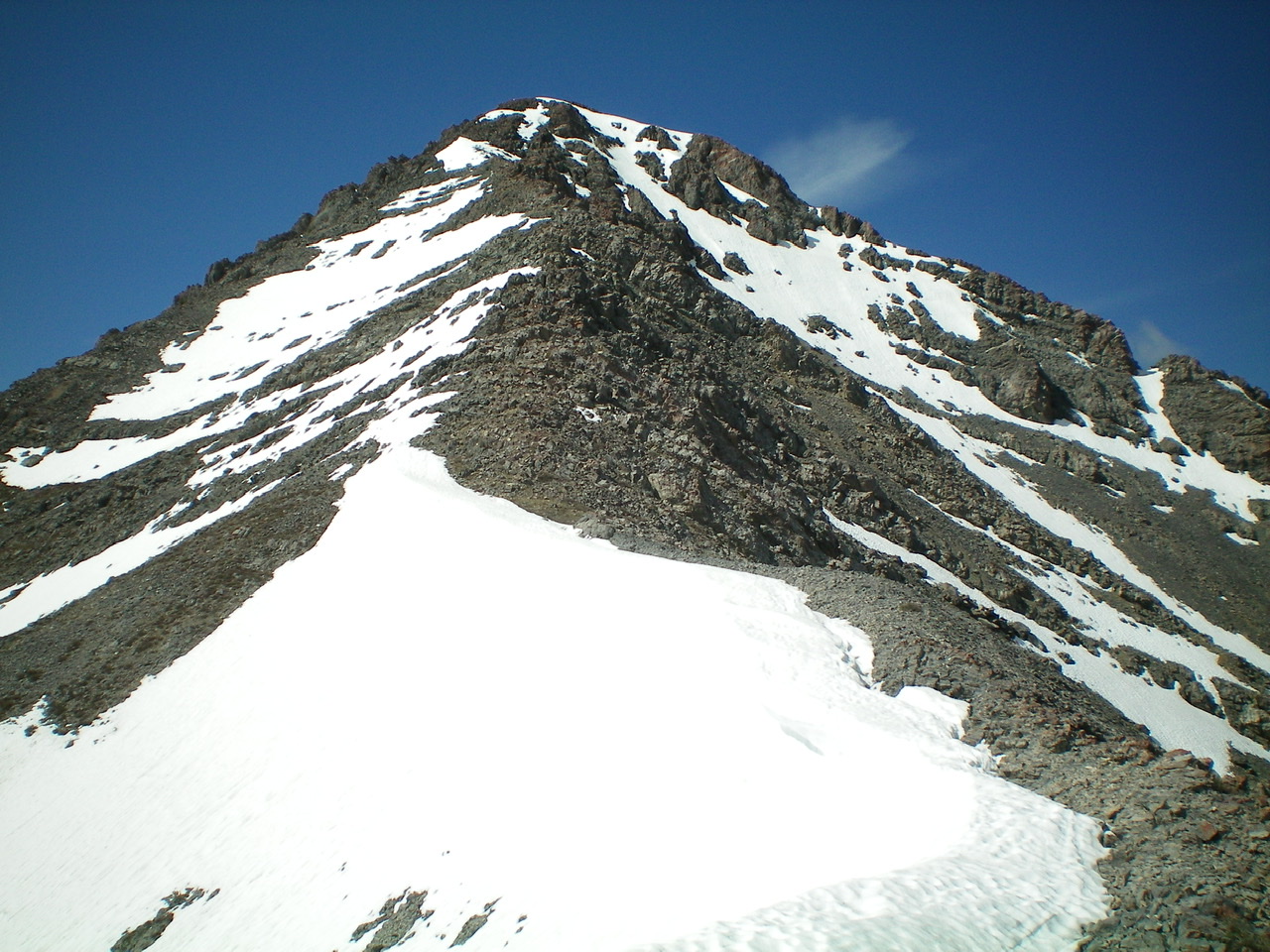 The entire north ridge of Saddle Mountain, as viewed from Point 10196. Notice the large Class 3 ridge outcrop on the ridge, well below the steep upper section of the ridge. Livingston Douglas Photo

Same as for the west gully/northwest shoulder

From the summit, carefully descend the steep, rocky upper section of the north ridge down to flatter ground and a saddle. Work your way through a large rocky ridge outcrop (Class 3) to reach much easier terrain. Continue northeast along the ridge up over gentle Point 10196 (a great place from which to take photos of the north ridge) and descend northwest to another saddle. This saddle is at the head of the west gully. Descend southwest then west down the gully and follow it back to 7,700 feet.

The most challenging part of the west gully descent is the scramble from the ridge saddle down to tree line. The terrain here is steep, loose gravel/scree then a combination of talus and scree. Unfortunately, the rock is too large to effectively boot-ski on, so it is a bit of a chore to work down through this area to safely reach tree line. The blowdown is a bit tedious in the upper section of the forest but eases as you go farther down the gully. 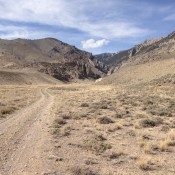 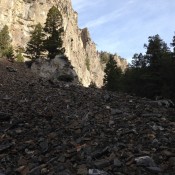 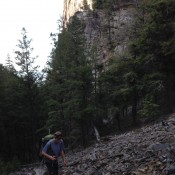 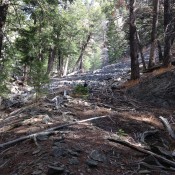 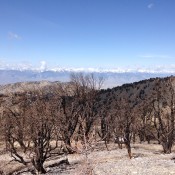 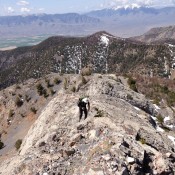 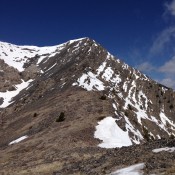 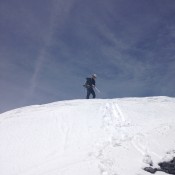 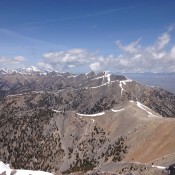