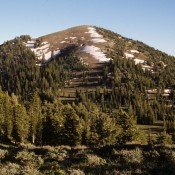 Climbing and access information for this peak is on Page 365 of the book. The access information in the book is no longer accurate as the roads and trails described therein have changed over the years. The updated information from Livingston Douglas (found below) will get you current. Updated February 2021 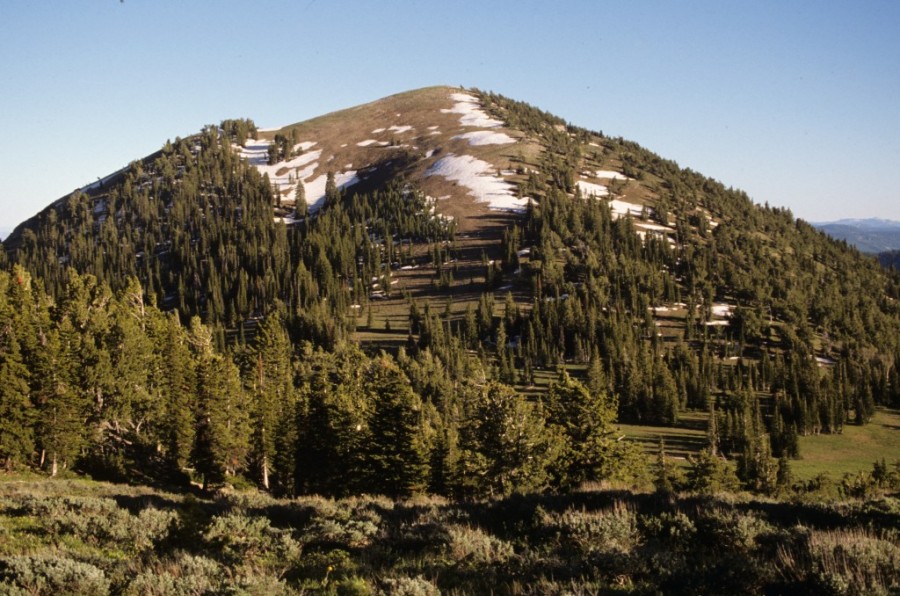 Sherman Peak as viewed from the north.

Sherman Peak is a behemoth. It is the highest peak in the Bear River Range and stands as a sentinel overlooking the north end of the Bear River Valley.

From the junction of US-30 and South 3rd Street in Soda Springs, drive south on South 3rd Street, which becomes Eightmile Road. At 6.4 miles, turn right at an unmarked junction (the road going straight is gravel, not paved). At 7.8 miles, the pavement ends. At 10.0 miles, enter the Cache National Forest and the road becomes FSR-425/Eightmile Canyon Road. At 11.5 miles, go straight at a road junction on FSR-425. At 13.4 miles, the road passes the site of the old Eightmile Campground. At 13.8 miles, reach a signed junction with FST-446 on the LHS of the road. FST-446 is an ATV/MC trail. Park at this trailhead or, if the road is too rough for your vehicle, park at the site of the old Eightmile Campground and hike up to the trailhead. The elevation at the trailhead is approximately 6,860 feet.

Bushwhack south across a meadow then follow the ridge crest southeast for a brief section. The ridge bends right/south and continues in a southward direction all the way to the summit. You will find a game trail, on and off, near the ridge crest. Skirt the right/west side of Point 9366 just below the forest line. Return to the ridge crest on a nice, diagonally-upward game trail. The open terrain on the north ridge is mostly grass, but there are some sections of sagebrush and other desert scrub (sometimes thick) to navigate through.

The saddle between Point 9366 and the summit is wide and open (easy field grass). Once past the gentle saddle, follow a weak game trail up through a short section of easy forest. The forest disappears and, from here, it is easy open terrain to the summit. Stay on the left/east side of the ridge crest for the easiest going (on a combination of scree and short scrub). The summit of Sherman Peak has a massive, wide cairn (a rock pile, really) and a USGS benchmark in a nearby ground boulder. It also has a tall wooden post and an old wooden Forest Service communication box with a rusty metal phone structure/case inside. The communication box is secured to a steel post. The views from the top are magnificent.

Same as for the west face/north ridge. This descent is part of a ridge traverse from Sherman Peak to Peak 9212. The easier, more direct access to the south ridge is via Skinner Canyon Road/FSR-403, which skirts the east side of the base of Sherman Peak’s south ridge in an open meadow at 8,800 feet.

After crossing a minor saddle at 9,317 feet, ascend 40 feet (vertical) up over a ridge hump. From this hump, descend south rapidly to the more important, and lowest, saddle between Sherman Peak and Peak 9212. The terrain in this section of the descent is a mix of forest and open veg. A game trail will help expedite your descent. This saddle is relatively narrow and has a large open meadow on its east side. Skinner Canyon Road cuts through the open meadow but does NOT cross the saddle. The elevation at this saddle is 8,780 feet. This is the base of the south ridge of Sherman Peak. 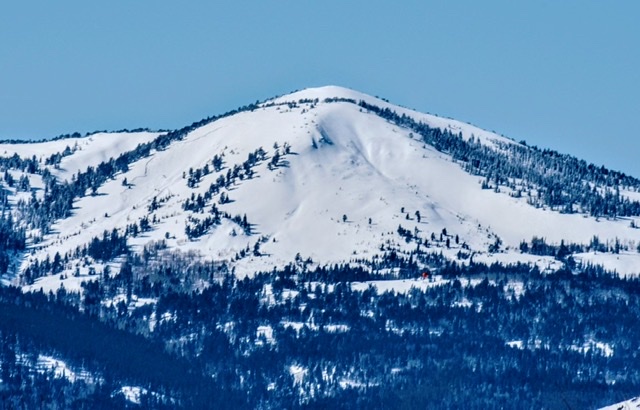 Sherman Peak, February 2021. If you look closely you will see a large avalanche scar on the left side of the photo. This avalanche killed a snowmobile rider. Russ Durrant Photo