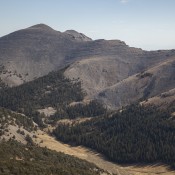 Climbing and access information for this peak is on Page 311 of the book. Livingston Douglas has provided a new route on this big peak as well as the many photos found below. Updated December 2019 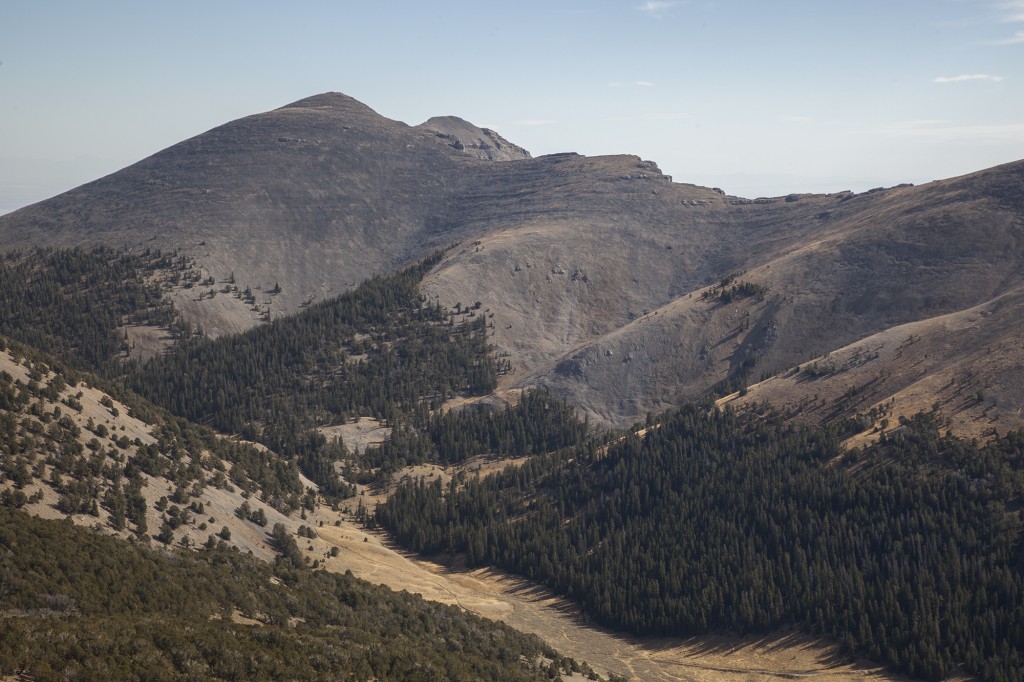 Shril Peak as viewed from the north. Larry Prescott Photo

North Creek Road is located 12.6 miles north of Howe on the [paved] Little Lost River Highway. Turn right/east onto [signed] North Creek Road. Drive 5.5 miles on North Creek Road to an unsigned dirt road on the right/south side of the road. Park here (6,495 feet). The road ends at a private ranch 0.1 farther up. The small, unmarked parking area is on BLM land and is at the junction of two ATV trails next to North Creek. Let’s call this the “trailhead.” You reach the Challis National Forest about ¼ mile upstream. The Challis National Forest map is accurate in its placement of the roads/trails here, but it is a bit difficult to decipher in the small area at the mouth of North Creek Canyon.

Please note that the USGS topo map is incorrect in its placement of the roads at the mouth of North Creek Canyon. The main road ends at a ranch on the north side of North Creek. It does not continue up into the canyon and cross to the south side of the creek. That part of the road is gone. The actual jeep road (ATV Trail #4209) that goes up into North Creek Canyon is located on the south side of the creek and follows the creek upstream to the “Tailings Ponds” shown on the map. While there aren’t any tailings ponds anymore, there are remnants of old mines in that area. From that point on, the USGS topo map is accurate. 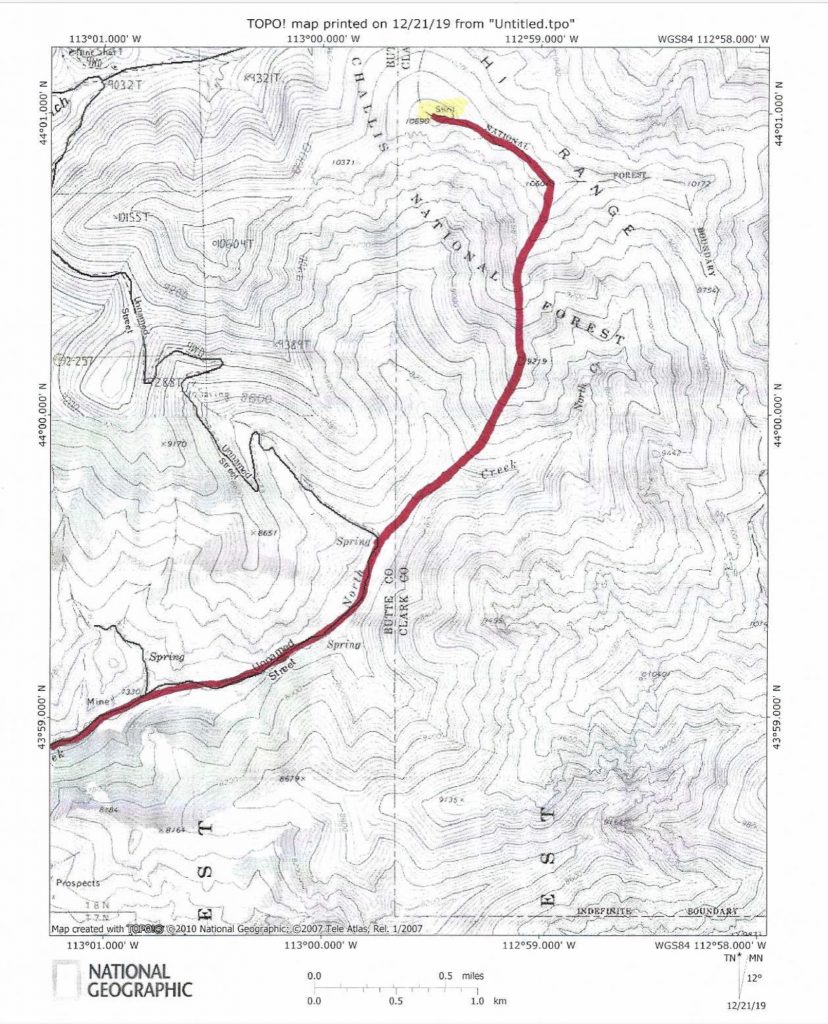 This route is the final leg of a loop route that begins and ends at the mouth of North Creek Canyon. The journey begins with a climb of Gloved Peak via its southeast ridge, a ridge traverse from Gloved Peak to Shril Benchmark, and a descent of the south ridge of Shril Benchmark to the valley floor of North Creek Canyon and a return to the trailhead.

The first leg of this descent is a ridge traverse southeast from Shril Benchmark to Point 10601. This is not a difficult ridge traverse, though it does have some narrow, rocky ridge outcrops to skirt. The terrain is decent shale and is nothing problematic. If you do this traverse in early summer, you may have some ridge snow to deal with.

The real challenge in this route is the descent from Point 10601 to the valley floor. It demands almost 3,000 vertical feet of down-climbing, which is significant. The initial descent south from Point 10601 has numerous rock strata/cliff bands on the ridge. You must move left/east to reduce the down-climb to a manageable level because the ridge proper has several sheer cliffs/steps on it. The traverses left (then returning across loose shale to the right) are somewhat tedious and time-consuming, but necessary to keep this descent at Class 3.

The highest ridge steps are the worst and require the greatest amount of circumventing. The subsequent (lower) ridge steps are of less magnitude and can be down-climbed (to the left) by shorter traverses across the tops of the cliff bands. Eventually, you can down-climb the ridge steps on the ridge proper and keep the difficulty at Class 3 or less. Once the ridge crest is more reasonable, descend the loose shale and minor ledges to reach tree line in a pine forest. Before entering the forest and losing visuals, you can see forested Point 9219 down below you. It is directly on the ridge and protrudes from a minor saddle to its north.

The pine forest goes quickly as the blowdown isn’t too onerous and the pine duff (with some shale mixed in) is a joy to descend. You will quickly reach the small saddle in front of Point 9219. Given the difficulty of side-hilling here, climb up over talus-and-pine covered Point 9219. From Point 9219, the ridge loses its definition and becomes more rounded. Head south-southwest down the ridge/slope in moderately-steep pine forest to reach the valley floor at or near an upper fork in the valley. Find an old 2-track jeep road heading right/west to the main fork of the valley.

Follow another 2-track jeep road south-southwest to reach the North Creek ATV Trail (FST-4209) at another fork in the valley in a large meadow. Follow FST-4209 back to the trailhead at the mouth of North Creek Canyon, fording the creek six (6) times on the way. With the appropriate bushwhacking and dexterity, you can avoid getting your feet wet in crossing the creek the multiple times that you must do so. 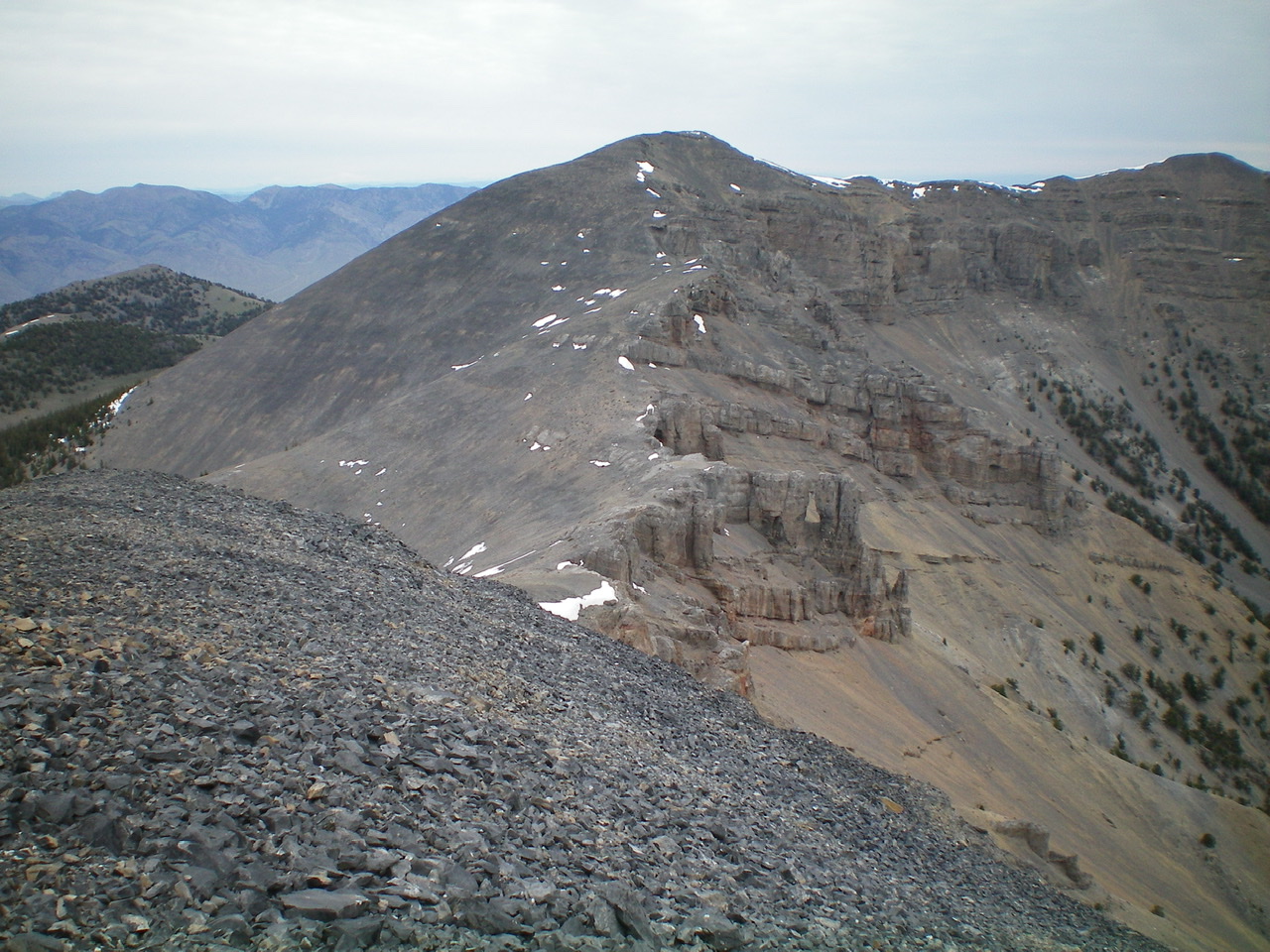 The connecting ridge between Gloved Peak and Shril Benchmark as viewed from the summit of Gloved Peak. Livingston Douglas Photo 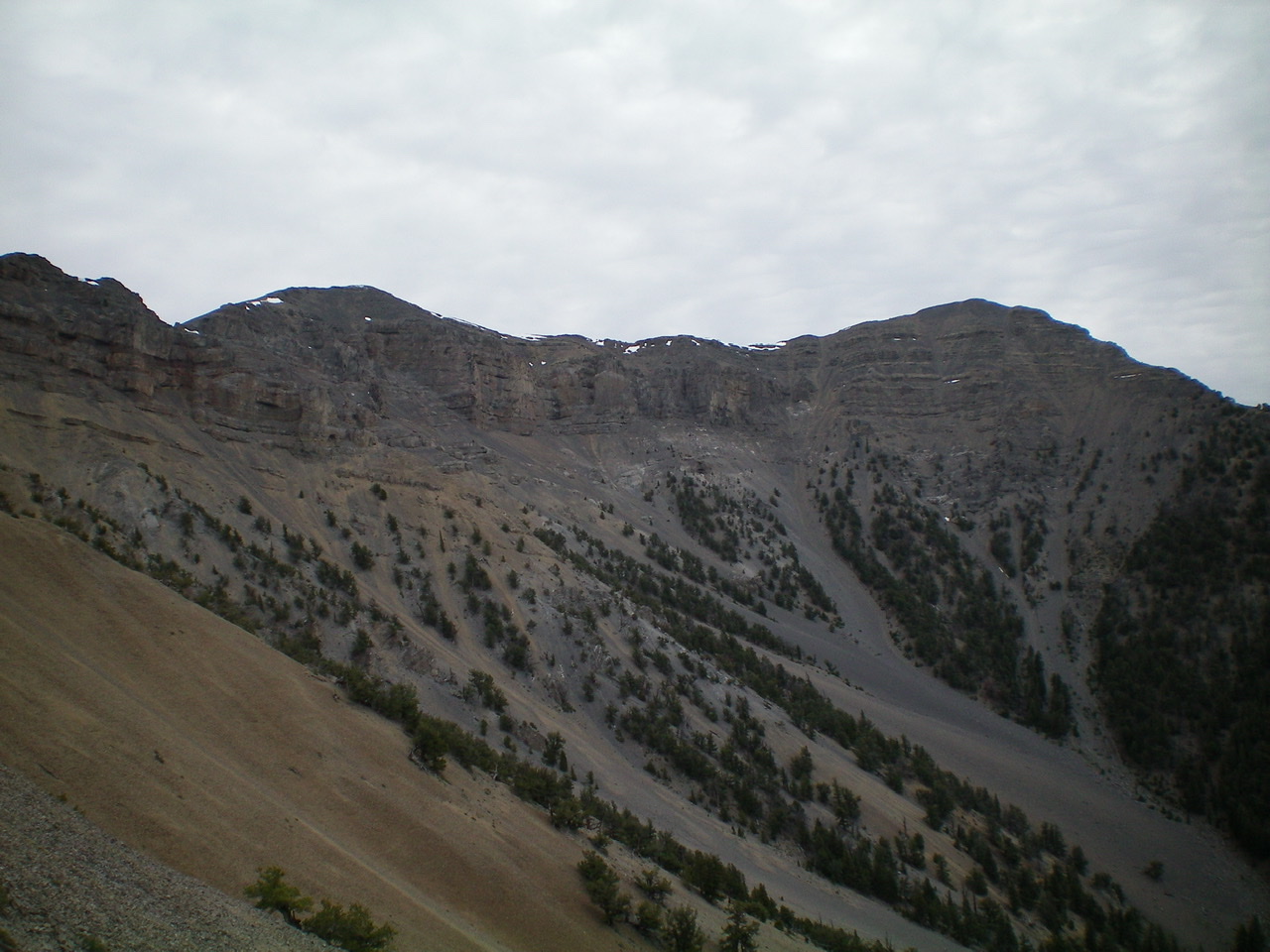 Shril Benchmark (left) and its connecting ridge to Point 10601 (right) as viewed from the southwest. The peaks appear, and are, of similar height. There is a gentle, albeit rocky, saddle between them. Livingston Douglas Photo 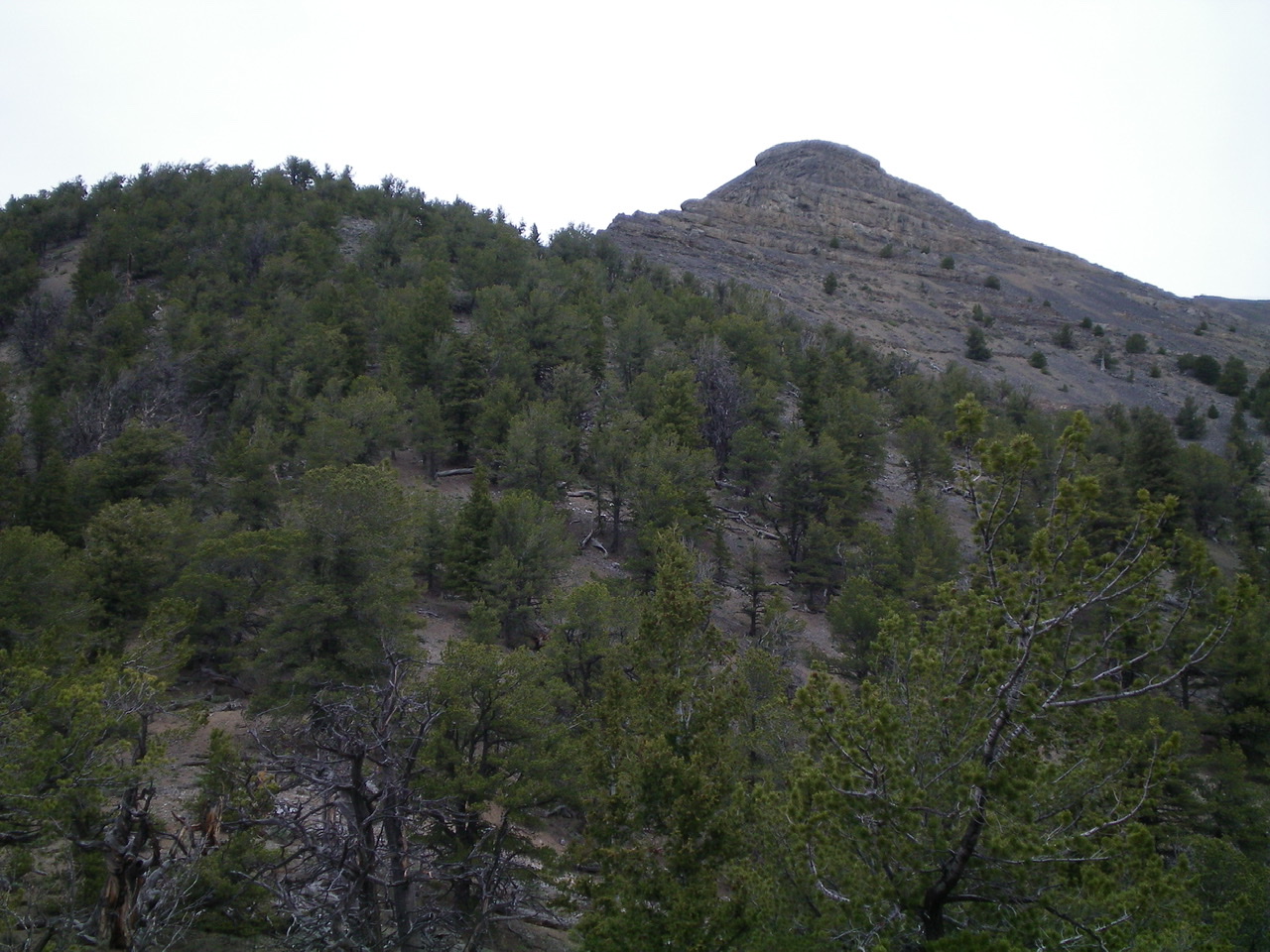 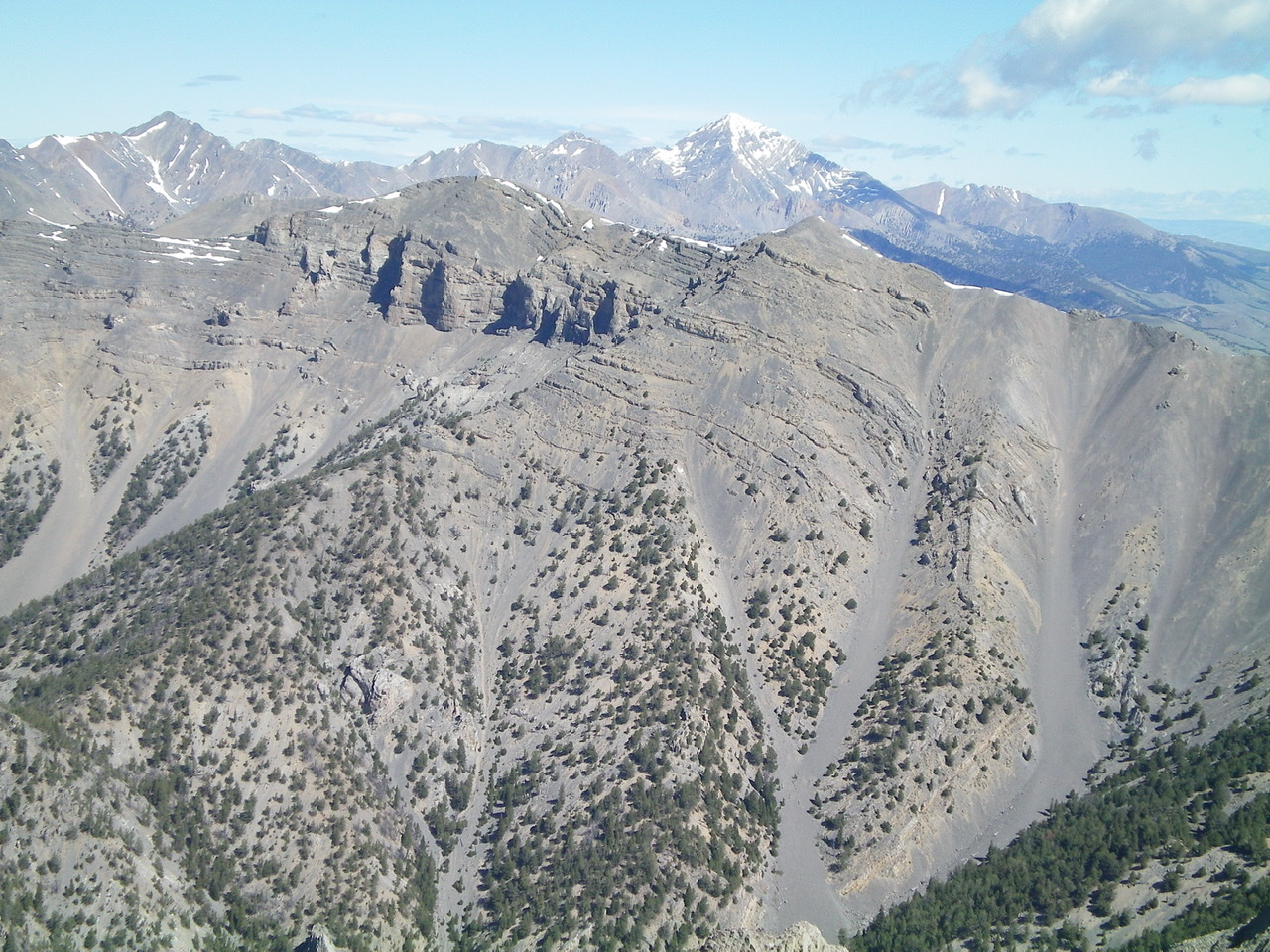 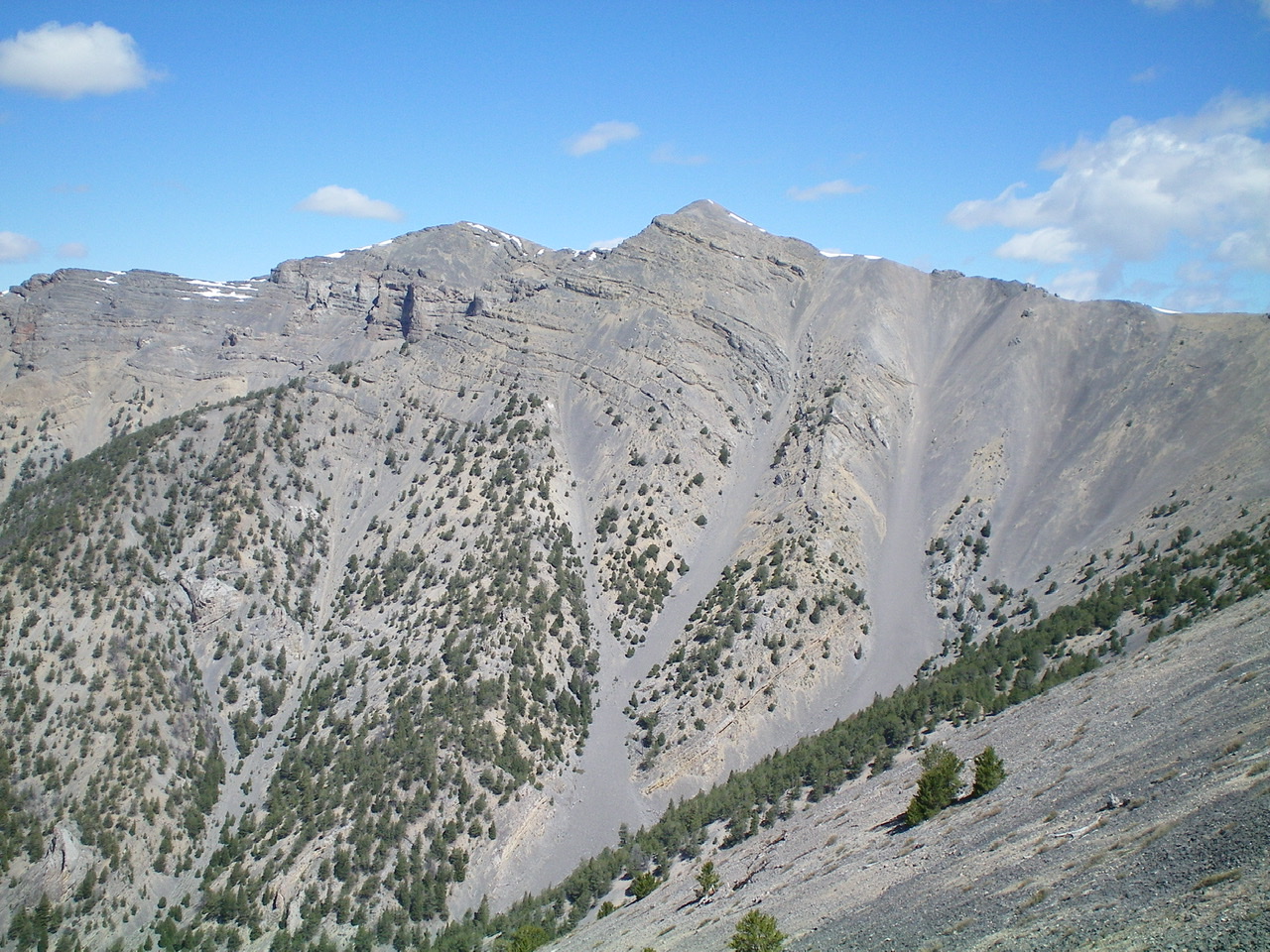 Point 10601 (slightly right of center), the south ridge (descending leftward), and the crumbly scree/gravel that must be navigated on the southeast face to descend the steps/breaks in the ridge. Watch your step up here! Livingston Douglas Photo 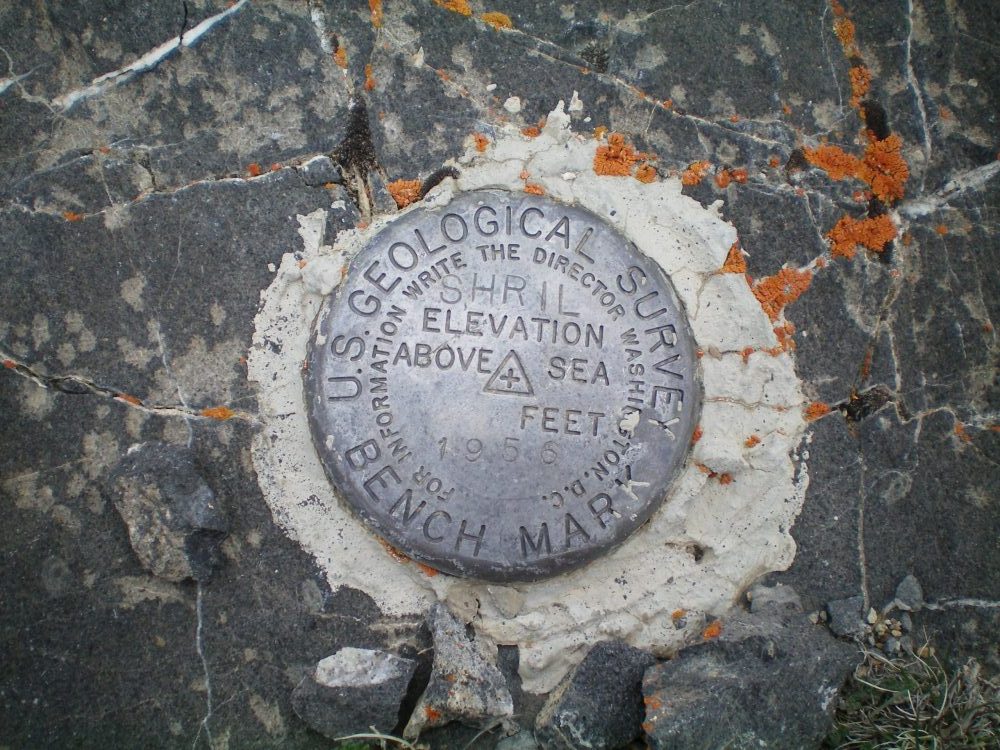