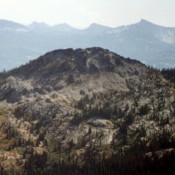 Climbing and access information for this peak is on Page 111 of the book. Updated August 2019

At the time the book was published, I had not climbed Slab Butte and only one climber had reported climbing the peak. On September 17, 2000, I finally made it to the mountain. Slab Butte is a fish fin-shaped summit composed of good, hard granite. The peak’s East Face offers 200-400 feet of good technical climbing. We climbed 3 routes on the face. The new routes on Slab Butte are set out below. USGS Brundage Mountain 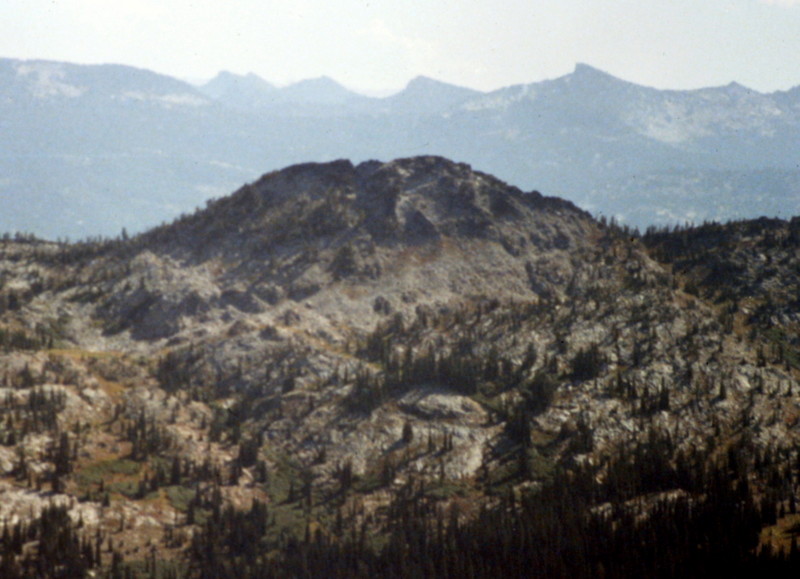 Slab Butte is an attractive peak with lots of granite conducive to short technical routes. This view is from Granite Mountain. 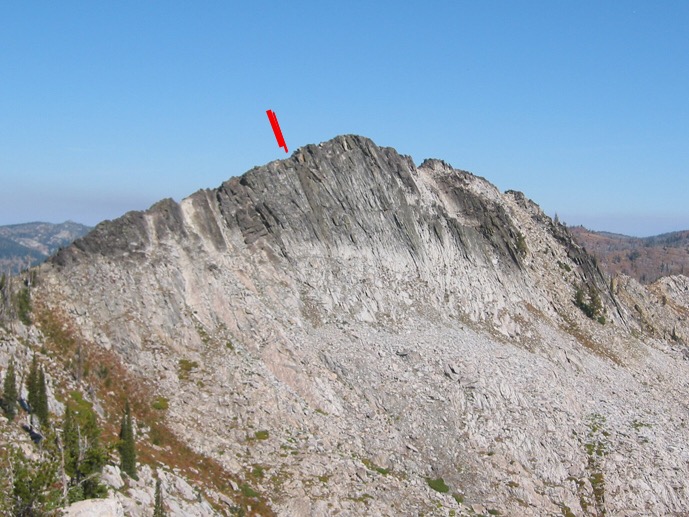 Slab Butte as viewed from the southeast. The top of the Das Buch route is marked. John Platt Photo 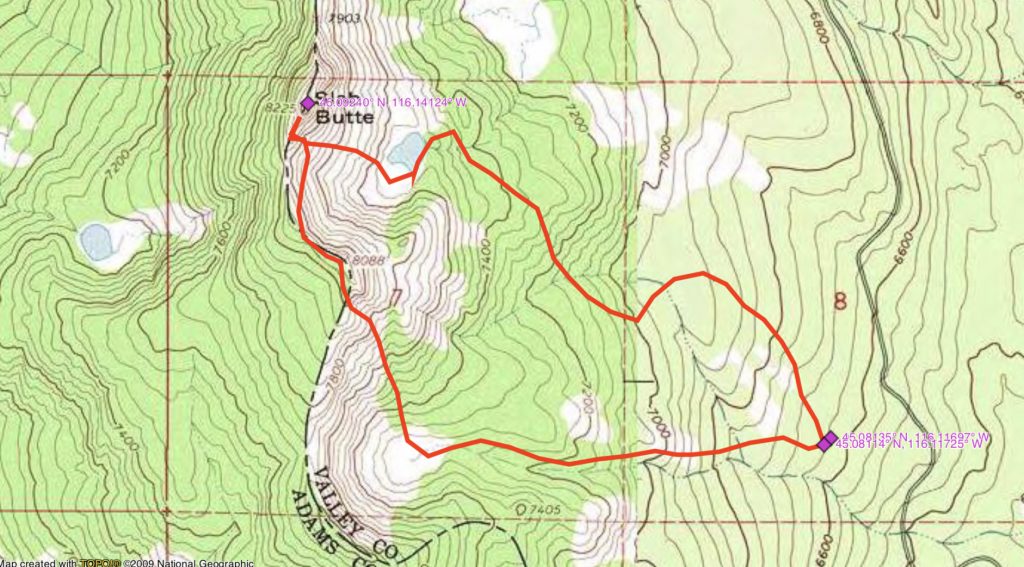 John Platt’s GPS track for approaching the peak in 2019. John’s GPS measured the route at 3.7 miles with 1,869 feet of elevation gain.

The East Face of Slab Butte is worth exploring. Two technical routes are set out below. There are other tempting lines that have yet to be climbed. 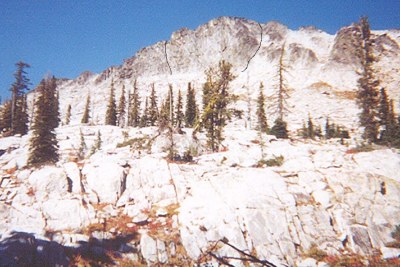 Slab Butte’s East Face. Das Buch is shown by dotted lines
on the left and Wright of Center by the dotted lines on the right.

This route is found just to the right of center on the East Face. The route is 1 1/2 pitches in length. Scramble to the base of the face across fallen slabs. The technical route starts up across the light-colored slabs that form the lower portion of the face. These slabs angle up steeply to the right and into a small alcove where the first pitch ends. From the alcove, the route climbs directly up a nearly vertical face toward a small tree. Angle to the left until you reach a 6-inch wide ledge which also angles up to the left. From this ledge, the route climbs directly to the summit ridge just north of the summit. There are good holds the entire way and lots of good cracks to swallow up your cams. First ascent led by Brian Wright.

This route climbs the obvious left-facing book that descends from the summit ridge roughly 200 feet south of the Wright of Center Route. The route is one pitch long with good holds. There are several loose blocks along the way. Be careful. The crux is a bulge about 100 feet up. First ascent led by Brian Wright. 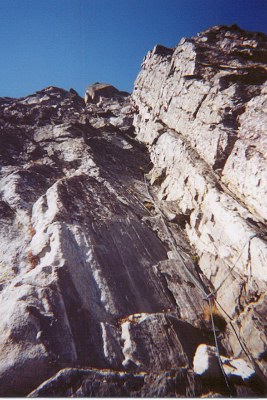 Looking up the Das Buch Route. 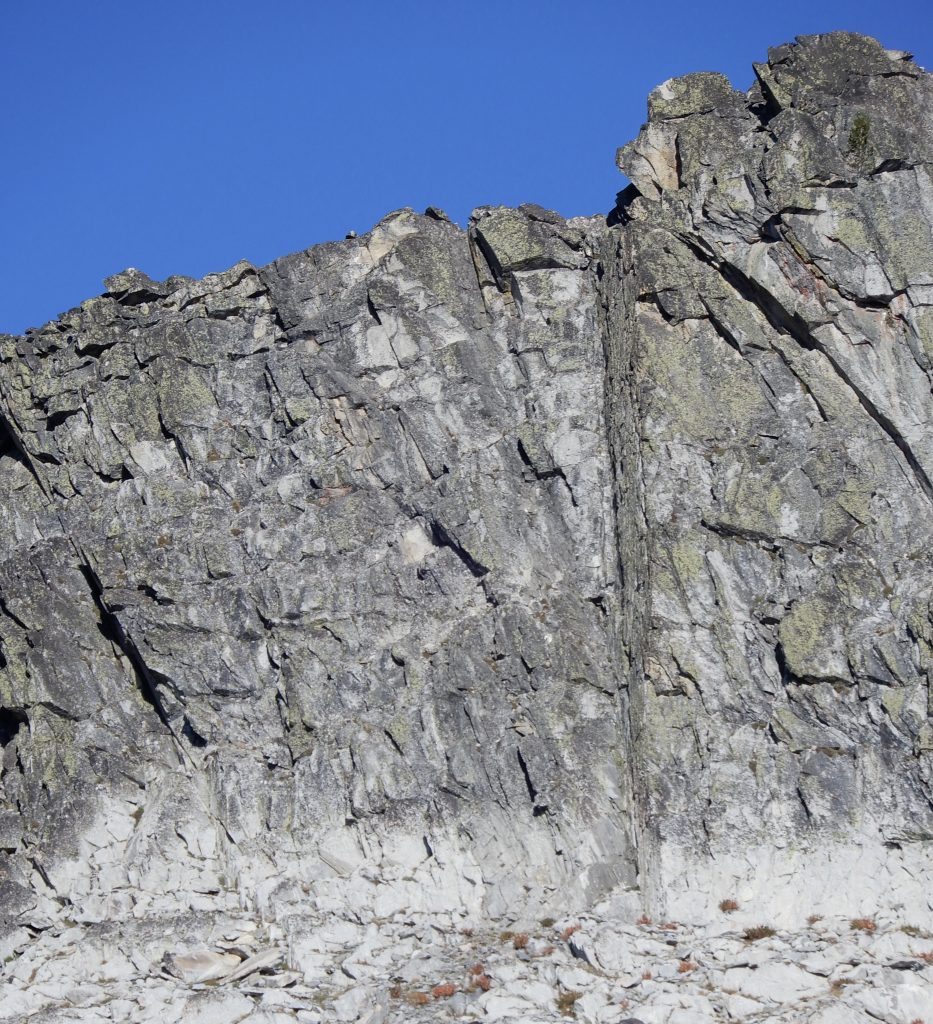 Another view of the Das Buch Route. John Platt Photo

This nontechnical route to the top is located 100 feet south of the Das Buch Route. The gully cuts up to the summit ridge with about 100 feet of steep scrambling. From the top of the gully, follow the ridge north over moderate blocks to the summit. 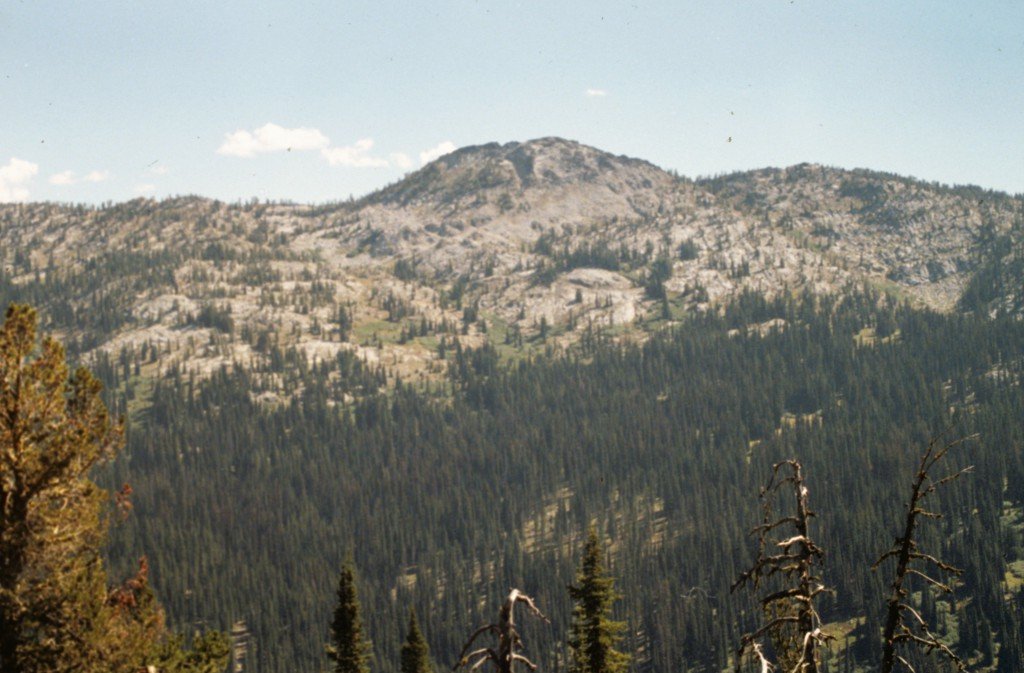 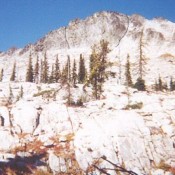 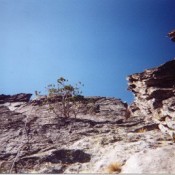 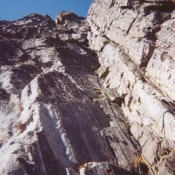 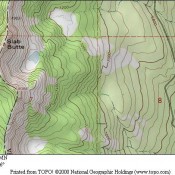 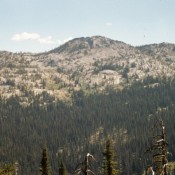