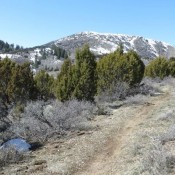 Climbing and access information for this peak is on Page 356 of the book. There are two important updates found below. Steve Mandella has provided a photo essay following a climb up the peak’s standard route. Livingston Douglas has provided two alternate route descriptions. USGS Clifton Creek. Updated November 2018

Slate Mountain is a good early season training hike in the Pocatello area. Margo and I climbed this peak last in 2015 with a little snow on it in March. This route is 6.6 miles round trip with 2,154 feet of elevation gain. Slate Mountain is usually dry by April/May. The trail is accessed directly from a small parking area along South Fork Mink Creek Road. 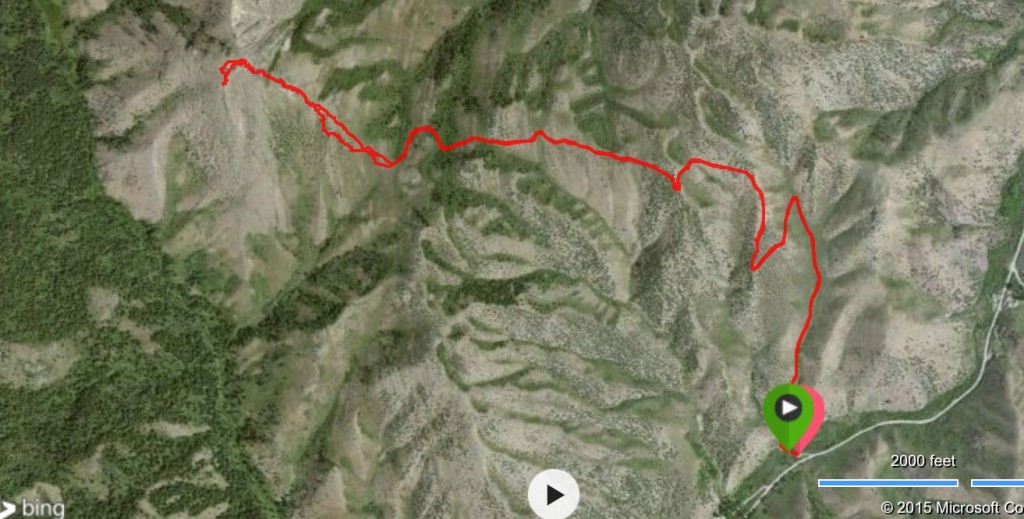 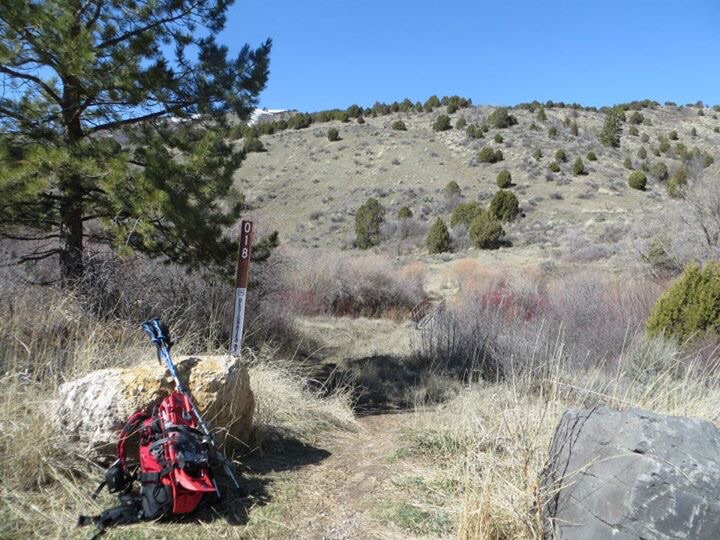 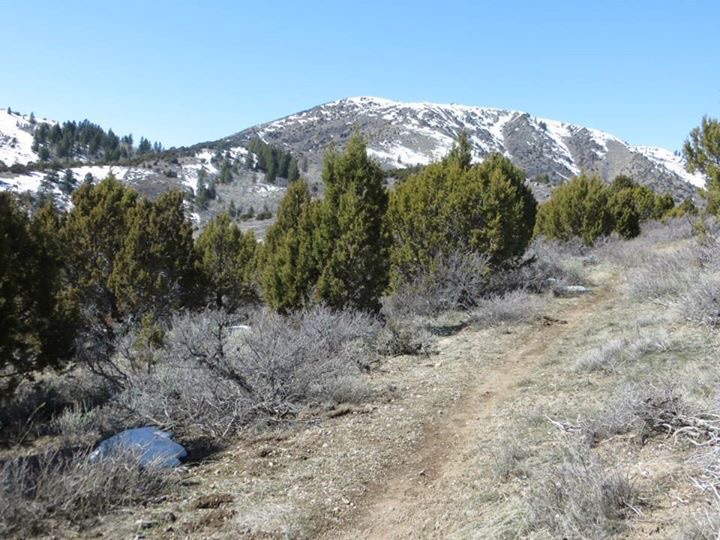 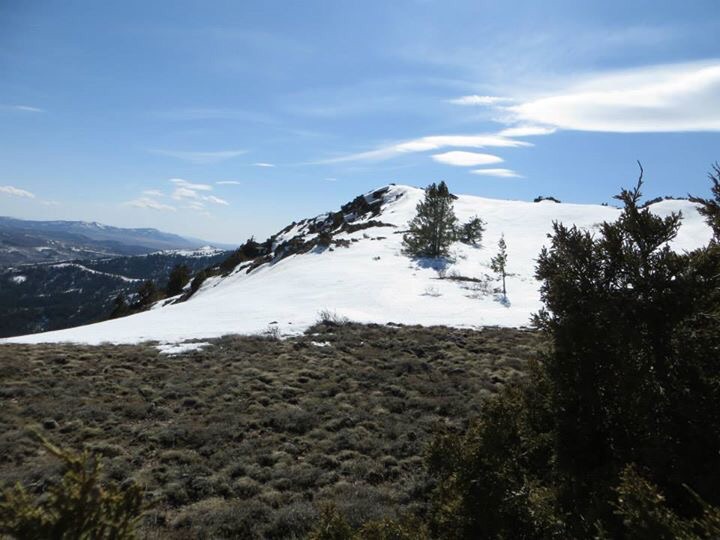 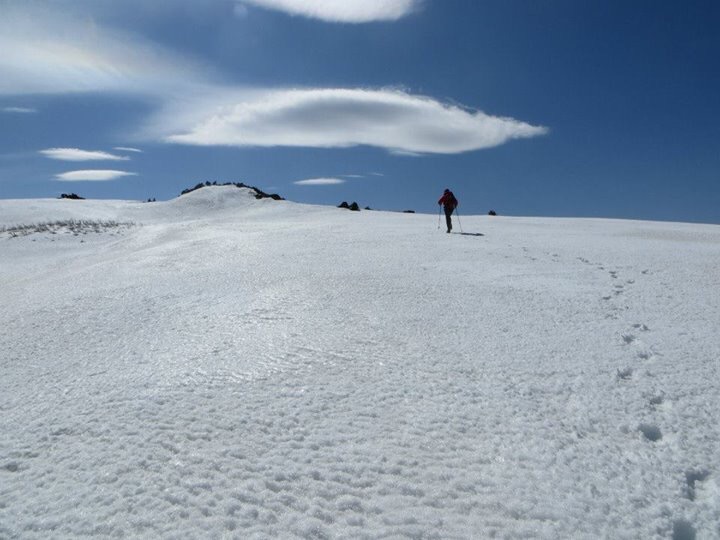 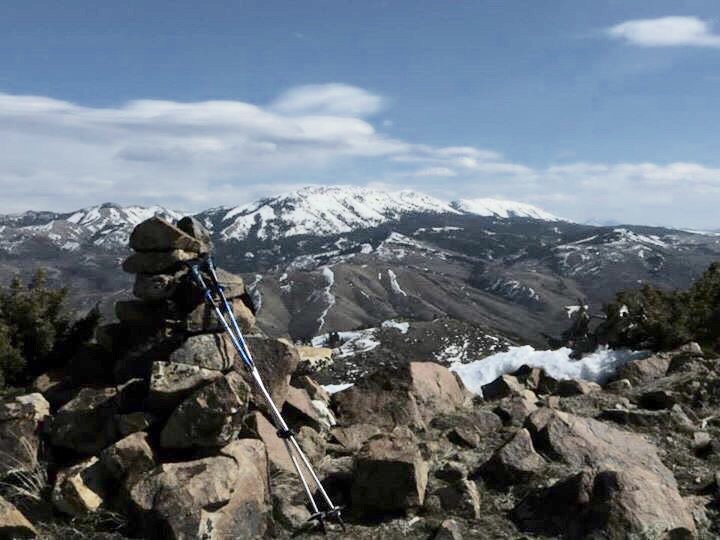 From the junction of Portneuf Road and the Bannock Highway/CR43A at the west end of Portneuf, drive south on the Bannock Highway for 6.4 miles. The West Fork Mink Creek Trail/FST-059 is on the right/west side of the road at a small parking area. The elevation at this trailhead is 5,205 feet. Thankfully, this trail is NOT open to motorized vehicles (ATVs, MCs), but it is open to mountain bikers. Hallelujah!

Hike about 1.5 miles up FST-059 to a trail junction (STRAIGHT is FST-059; RIGHT is FST-045) at the base of a gully that forks northeast from the West Fork of Mink Creek. FST-045 (according to the National Forest map) is a narrow trail that is closed to motorized vehicles. FST-045 is not shown on the USGS topo map. It was a GODSEND to me because I had no idea it was there. It is in a perfect position to get you up to the base of the south ridge of Slate Mountain. No bushwhacking required.

Follow FST-045 as it initially drops to cross the West Fork of Mink Creek using a wooden plank + cut tree stump + boulder. Mountain bikers must ford the small creek. The trail then follows the right/east side of the creek and then leaves the drainage to climb northeast then east to reach the base of the poorly-defined south ridge of Slate Mountain in an area where the trail flattens out. Consequently, I loosely call this route the south ridge/south face route as it often feels like more of a face climb than a ridge climb.

Leave FST-045 at the 5,820-foot level and bushwhack north up steep desert scrub. You may even see cattle nearby. The ones that saw me were perplexed as to why I was leaving the trail to bushwhack upward in their terrain. You will notice a spur ridge (the southwest spur) to the left/west that is a nice alternate way to climb to the summit. That spur joins the south ridge higher up. You would have to access that spur ridge earlier on FST-045 and might have some unpleasant bushwhacking to get up on it, but it is a beautiful sub-ridge.

But let’s get back to our objective—the south ridge. After leaving FST-045, bushwhack due north up through thick desert scrub. There are cattle trails and gaps to help you navigate through this unpleasant stuff. The scrub gets thinner and easier as you gain altitude. Sections of talus/scree fields join the mix and are generally easier to climb than the desert scrub. The ridge gets narrower and much better defined as you get high up on Slate Mountain. The ridge crest itself becomes a combination of talus and [some] boulders. The summit of Slate Mountain is a narrow ridge crest. The high point has a nice cairn atop it, but nothing else. There were no signs of any trails that reach all the way to the summit high point.

Same as for the south ridge/face

Descending directly east or southeast off the summit of Slate Mountain is not a good idea. The terrain is very steep, rocky and loose. In order to “live to climb another day,” it is best to descend the north ridge briefly to the head of an obvious gully that cuts the east face. Amazingly, you will find a climber’s trail in this gully. Follow this trail as it descends southeast, cutting across the east face and descending a prominent shoulder that also heads southeast. It’s possible to descend another shoulder northeast to intercept the Slate Mountain Trail there but that adds to the length of the hike.

Continue following the climber’s trail southeast down the shoulder then leave it to descend east directly to the trail junction. The bushwhack from this shoulder to the trail junction is not fun. Thick scrub and then a patch of wicked aspens will make you battle your way there. You quickly lose visuals and you will have to skirt the upper end of a dry drainage that goes left/east to finally stumble upon the junction. I came out of the tall, thick scrub onto FST-045 about 20 yards or so (horizontal) from the junction. That’s about as good as it gets when you have no visibility for a while.

Once at the trail junction (unsigned as it is), follow FST-018/Slate Mountain Trail as it winds its way northeast then east then southeast then south to drop down to Bannock Highway at the Slate Mountain Trailhead, which is located about a mile north of the West Fork Trailhead. Walk a mile south on Bannock Highway to return to your vehicle. Please note that the USGS topo map wrongly positions the Slate Mountain Trail. The trail does NOT descend the drainage northwest of the Bannock Guard Station. It actually descends a north-to-south drainage about ¼ mile east of that drainage. The trail does NOT end at the Bannock Guard Station, but ends about 0.2 miles northeast of it. As a matter of fact, the public is not allowed access to the Bannock Guard Station, as warning signs indicate along Bannock Highway (“No public access; cameras are watching”). 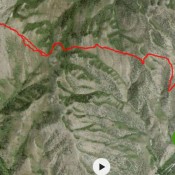 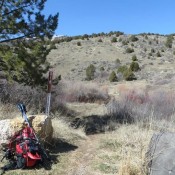 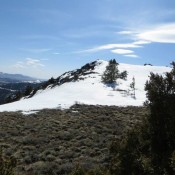 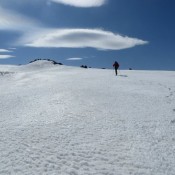 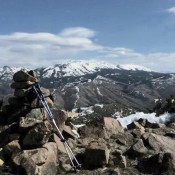