Climbing and access information for this peak is on Page 360 of the book.

I hoped to drive to 7,080 feet, but the road is closed at about the “24” in Section 24 on the map. It is washed out, gated, and posted prohibiting “motorized or mechanized” vehicles, so no bikes either. There is parking just before the gate. Most traffic in the area appears to be ATVs.

I walked up the old road. At the mapped junction at 6,057 feet, a single track (not apparently the old mapped road) heads left, but I didn’t want that one anyway. The more northerly road continues in mostly drivable (if it were legal) condition to roughly 6,800 feet where there is a large tree with a bare area. It looks like a campsite with some usage (perhaps before the gate went up?). Beyond this point, the road gets less and less road-like and more and more trail-like to its end at a bit below 7,100 feet in a large opening.

If you look at the attached GPS track, I went up the easterly track. I followed animal paths into a massive ceanothus patch, but the paths ended in the middle of this and I brush-bashed my way through the rest. This is not advised and was somewhat painful in shorts but would have been atrociously hot in long pants. Instead, if you look at the track, you will see a straight line from the summit heading SSE. My GPS was off for this section. I turned it back on for the short western wiggly bit. This was through the eastern edge of a dense aspen grove with mostly non-woody undergrowth. It’s still bushwhacking, but it was orders of magnitude better than the ceanothus. In sum, go west into the aspens if there are excessively brushy areas above you.

The road is easy, the brush band is the crux, and the slopes above the brush band are generally open-to-small-brush that is easy to pick a way through. There is a register on top. I signed it, and someone signed it in 2003 – but the other entries date back to the 1930s and 1940s. The paper is very fragile; be careful in handling it.

You should note that the summit is on the Fort Hall Indian Reservation and permission should be obtained to hike here. However, I passed a decrepit partial fence line (a few posts, a strand or two of barbed wire) at around 8,000 feet, and on my way down I noticed a blank sign a bit higher. In other words, the ridge is not posted as far as I can tell. I did not notice any other human activity in the area except for evidence of cattle grazing (and the register). 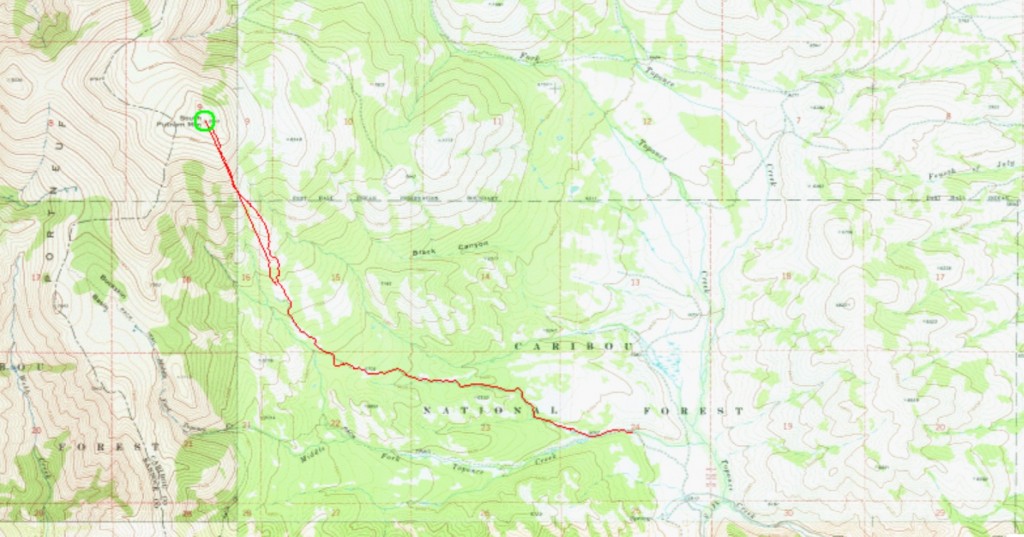