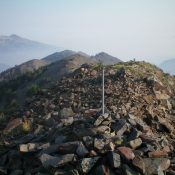 Climbing and access information for this peak is on Page 255 of the book. Published November 2021

Star Hope Peak is located on a magnificent ridge that separates Star Hope Canyon from Muldoon Canyon at the southwest corner of Copper Basin. It is most easily climbed via its west face and west ridge. USGS Star Hope Mine 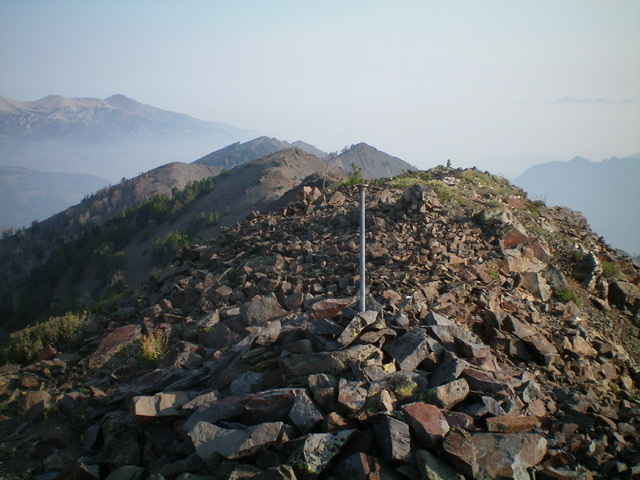 Looking north from the summit of Star Hope Peak. Notice the many bumps on this long ridgeline. Livingston Douglas Photo

From the signed junction of FSR-135/Copper Basin Road and FSR-138/Copper Basin Loop Road, drive south on FSR-138. At 9.1 miles, reach the Star Hope Campground. At 9.3 miles, after the road crosses Star Hope Creek on a bridge, turn right/south onto [unsigned] FSR-508/Star Hope Creek Road. Drive south on this rugged 2-track as far as you wish. You will need a 4WD vehicle with good tires. It is just over two miles to the base of the west face of Star Hope Peak. Use a GPS to be sure that you are at the correct departure point in the 8,200-foot to 8,240-foot range.

The USGS topo map has several errors that make this climb a confusing and frustrating endeavor. The lack of a defined “west ridge” does not help matters. There are old 2-track side roads that don’t appear on the USGS topo map. And the 2-track mining road that heads up the west face toward the “west ridge” is no longer visible from Star Hope Creek Road. It does still exist higher up but takes long switchbacks up the west face and is of limited use to hikers.

There are multiple possible “west ridges” on Star Hope Peak. The book is unclear as to which one to climb. The terrain here is steep, loose, forested, and rough. There are rocky outcrops and cliff faces to circumvent as well. I chose to climb the “west ridge” that leads up to the ridge crest just south of the summit. I hiked south up Star Hope Creek Road from the 1.5-mile point (where the road gets rockier) but I could not find the old mining road shown on the USGS topo map. There are more patches of forest along Star Hope Creek Road than the USGS topo map shows, which adds to the confusion and limits visibility of the terrain on the west side Star Hope Peak.

I left Star Hope Creek Road in an open area (8,250 feet) at the base of the west face, having given up on finding the old mining road. From here, bushwhack northeast through sagebrush that quickly becomes quite steep. Aim at a forested ridge crest to the left. That is the “west ridge” of Star Hope Peak. The terrain on the west face has a loose shale base and gets quite steep in sections. Higher up (as you approach the forest), the slope is quite steep and the scree/gravel base is very loose. Battling with the scrub does not help matters. Seek out rock ribs (Class 3) for better footing.

Once on the forested ridgeline, bushwhack southeast up the ridge through ridge pines, blowdown, scrub, and loose scree/gravel. Just above tree line, the ridge bends left/east for the final climb to the summit crest. The talus/scree on this upper ridge section is less steep and goes quickly. Once on the summit ridge (at about 10,400 feet), follow a goat trail north to the cairned summit. I stuck a survey pole in the summit cairn. There are many ridge points on the summit ridge, but this is definitely the highest one. There is a small triangulation post and some triangulation wiring on the summit. 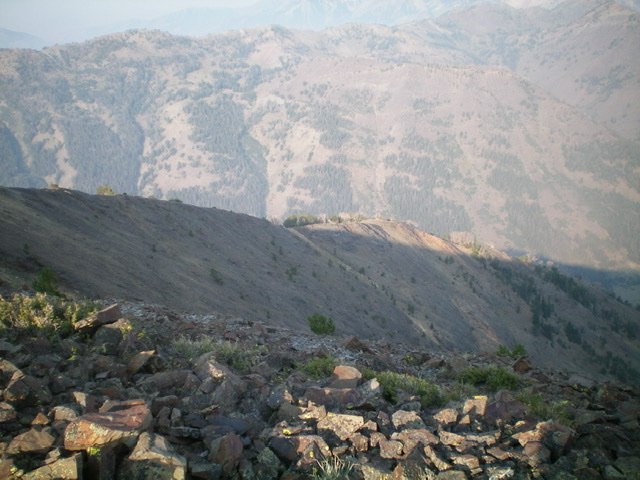 Looking at the upper section of the west ridge (mid-ground) from the summit. Livingston Douglas Photo

From the summit, return south on the summit crest to the top of the west ridge. Descend the ridge in open terrain on loose scree/gravel down to 9,800 feet. The ridge bends right-ish/northwest here and soon enters a dense pine forest. Lower down, the ridge bends left-ish/west and becomes a face. The forest is thick and the blowdown is unpleasant. The terrain pulls you toward a narrow gully to the north.

Rather than suffer in the thick forest or get pulled into the narrow, steep gully, move left/southwest in semi-open then open terrain (sagebrush) and descend the open west face down to Star Hope Creek Road. Cross the old mining road twice (it switchbacks its way up to a mine) and continue down through unending sagebrush to reach the road. The old mining road is grossly overgrown with field grass and sagebrush now, so badly that it is almost impossible to hike on it. No wonder it is impossible to see from Star Hope Creek Road. Once on the road, follow it north to your parked vehicle.