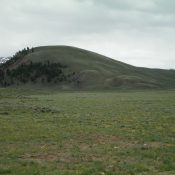 Star Hope Benchmark is a hump that is located in the interior of Copper Basin in the basin’s northwest corner. Star Hope Creek is on its East Side and the Copper Basin Loop Road runs along its West Side. It still has a USGS benchmark on its summit. USGS Big Black Dome 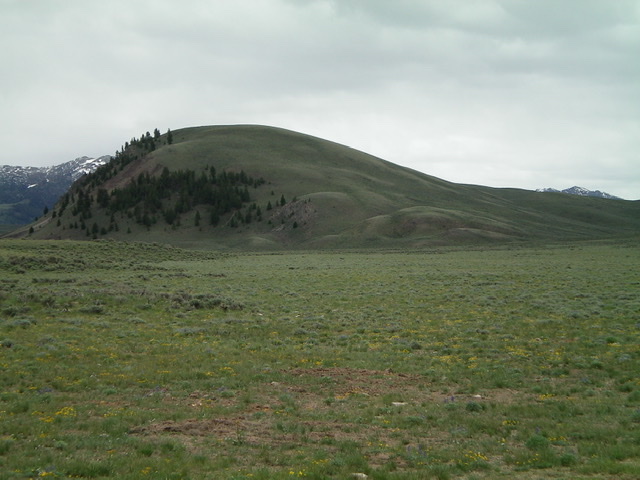 Park along FSR-138/Copper Basin Loop Road about ¾ mile south of junction of FSR-135/FSR-138 at a spot just before passing Point 7872. This location is at the base of the Northwest Face of Star Hope Benchmark, which is a clearly-visible, grassy hump. The elevation here is 7,580 feet. This is the West Side Copper Basin Loop Road. The road heads south from here and curls eastward to re-join FSR-135/Copper Basin Road. FSR-135 heads north then bends west to return to the aforementioned junction of FSR-135/FSR-138 at the northwest corner of Copper Basin.

From the Copper Basin Loop Road, hike up an old 2-track jeep road that heads south up the draw between Star Hope Benchmark and Point 7872. Leave the weak road to scramble southeast up the sagebrush slopes of the Northwest Face of Star Hope Benchmark. The summit area is a slanted, grassy plateau with minimal rock. The high point is located toward the south end of the elongated summit area. There is a USGS benchmark in a large ground boulder with some old triangulation sticks/posts laying on the ground nearby. The summit offers nice views of the Pioneer Mountain peaks that surround Copper Basin. Round-trip stats: 1.5 miles with 500 feet of elevation gain.