Sugarloaf is a windswept bump on a long plateau/butte at the north end of the South Hills. It has two notable landmarks: an antenna facility (quite visible) and a USGS benchmark (not so visible). The easiest route is via Indian Spring Road (from the north) with a short scramble up the east face on easy scrub. In September, you will probably see lots of bird hunters in the area and you’ll hear the pop of shotgun blasts during your short hike. USGS Grand View Peak 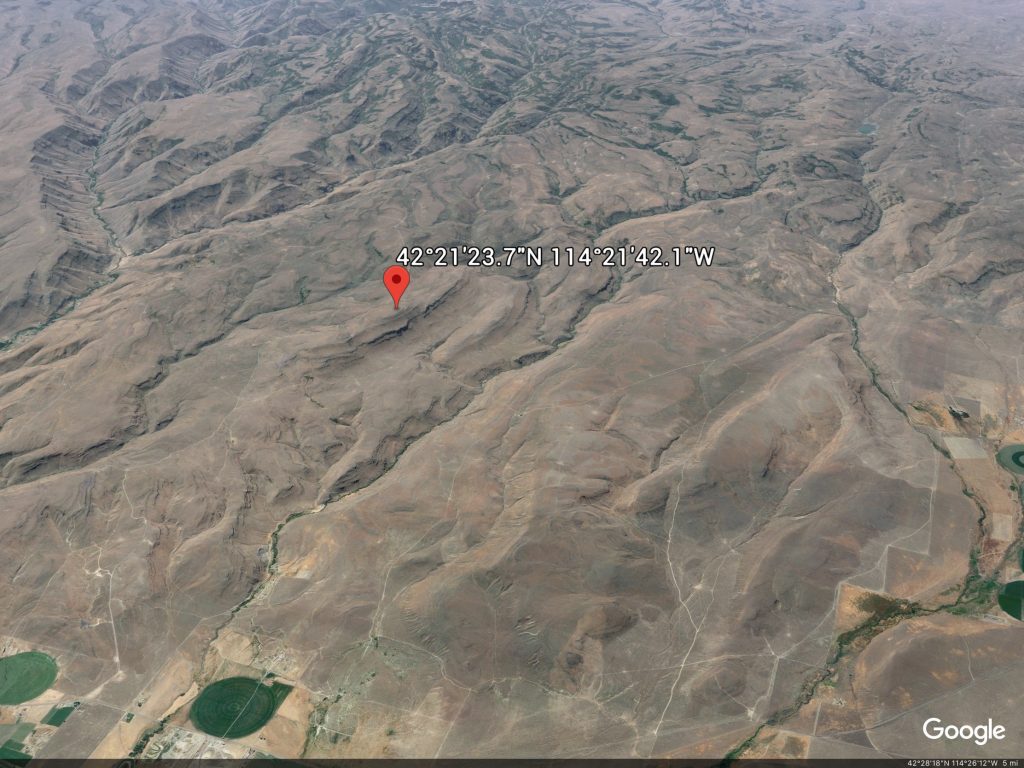 This is a much more challenging route than the simple scramble up the east face from Indian Spring Road. It requires a true scramble up the steep east face of a horseshoe-shaped plateau that reaches its high point at Sugarloaf. Not knowing the road conditions on the plateau (and being camped along Rock Creek Road), this is the route that I chose to attempt. I had planned to climb a magnificent northeast shoulder that drops to Rock Creek Road about 0.8 mile south of the “mailbox pullout,” but I was accosted by dogs from private property across the road when I was attempting to find a parking pullout near that shoulder (there are no pullouts here).

While you can park at the “mailbox pullout” and walk south on Rock Creek Road for 0.8 mile to the base of the northeast shoulder, that is a dangerous proposition given the narrow nature of Rock Creek Road and the speed at which people drive up/down this curved road. Park at the “mailbox pullout” and be safe. This location also avoids a difficult ford of Rock Creek. The east face of the plateau is an imposing sight. It is a steep climb up a combination of scrub (sometimes tall and thick), field grass, and talus/scree, with a mix of gullies and shoulders.

From the “mailbox pullout,” aim for the top of an obvious gully just to the left/south of the starting point. Cross to the left/south side of the gully to avoid the worst of the thick scrub and scramble up a steep shoulder to reach the top of the face. This requires 550 feet of climbing but goes pretty quickly (15-20 minutes). Once at the head of the gully, make a navigational note of what to look for on the descent in order to find this spot, else you may end up on private land and/or in impossible terrain to descend.

Bushwhack west then southwest across easy open scrub to reach a well-traveled jeep road (Cherry Springs Road on the USGS topo map). Make a mental note of where you reach the road and turn around to look back down the ascent route. This is critical when you return to descend this route later in the day. Now it’s simply a road hike (albeit a long one) south then southwest to a road junction (unsigned) with Indian Spring Road (2-1/2 to 3 miles). Then go right/north onto Indian Spring Road and follow it north for 1-1/2 miles as it tracks the right/east side of the south ridge of Sugarloaf.

Leave the road soon after an antenna access road heads off to the left/west. Scramble northwest up a relatively easy scrub slope to the flat, scrub-covered summit area of Sugarloaf. Pass by the antenna facility (which is located just below the summit plateau on its west side) and continue north another 100 yards or so to find the benchmark. I wandered around a bit to find it, but stuck a triangulation post in a cairn at the summit benchmark so that it is more obvious to future climbers. The South Hills are a notoriously windy place. Do not attempt this peak in windy conditions or you will have a miserable day.