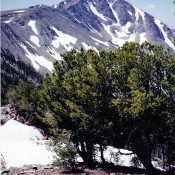 Climbing and access information for this peak is on Page 296 of the book.

Tendoy Peak is approached from the impressive Bear Valley Lakes Basin [(A)(10.2)(a) on Page 316]. Livingston Douglas has provided detailed route information for his ascent and descent routes on the peak’s Northeast Ridge and Southeast Face. It is likely that his lines are first ascents/descents on these routes. USGS Allison Creek 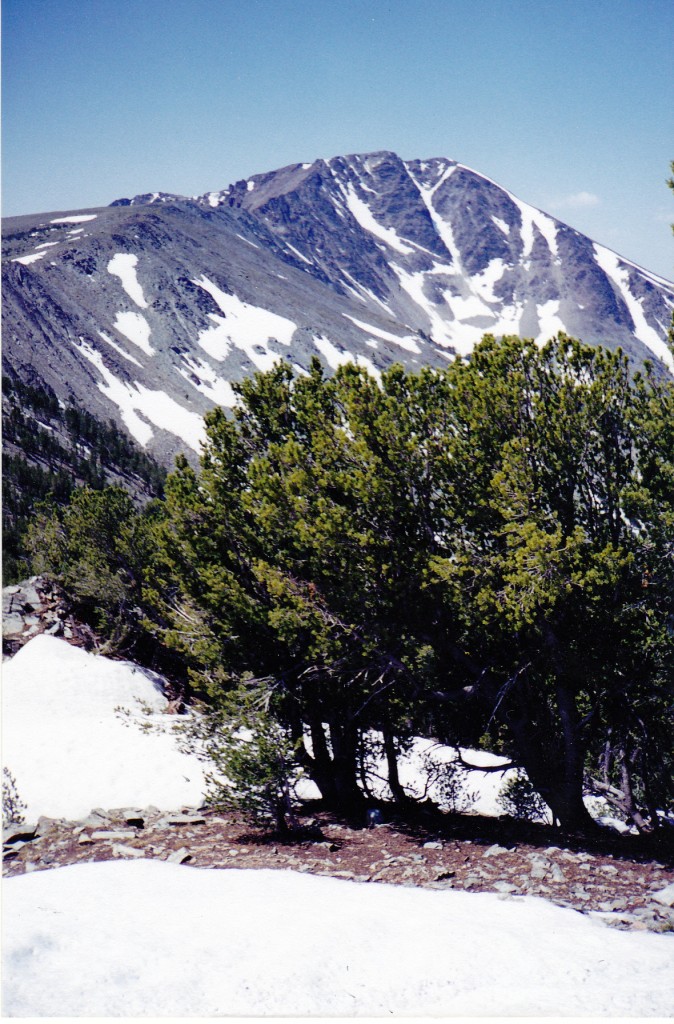 Looking southwest toward Tendoy Peak. From Basin Lake, the approach is a pleasant, trail-less hike with stretches of easy scrambling. Rick Baugher Photo and Commentary

This route is a ridge traverse from McNutt Peak. From the ridge saddle (9,820 feet) directly south of McNutt Peak, follow the ridge crest south then southwest, climbing over Point 9997 en route. This section is a Class 2 combination of talus and ridge rock. When you reach the 10,320-foot level, the ridge steepens and narrows. If you stay close to the ridge (on its left side), it is now a Class 3 angled talus and boulder scramble.

Surprisingly, I saw a mountain lion cruising across the talus field below me when I was in this section of the climb. It ignored me initially until I kicked out some rocks. Then, it looked up my way. Soon after, the lion continued its talus field traverse. The ridge crest itself is Class 4 and the talus field below (to the left) is Class 2. Continue to follow the left side of the ridge until the ridge turns sharply to the right/east and the slope eases considerably. From here, it’s an easy Class 2 talus-and-boulder scramble to the summit.

Descend east, then northeast, on the south/southeast side of the ridge crest. Once past the nasty cliffs of the East Face of the South Ridge, it’s now safe to choose your line of descent down to Bear Lake 9135. This is a tedious, loose descent on talus and scree that steepens as you get closer to the lake.

Stay on the East Side of a prominent snow-filled couloir that sits directly underneath (and east of) the imposing East Face of the South Ridge of Tendoy Peak. This couloir is visible on the Allison Creek Quadrangle, but you’ll see it up close and personal. The couloir is very obvious, but do not try to descend into the snow-filled couloir. The sides of the couloir are steep, very loose scree, and the snow is hard and steep. A fall there would cascade you into the boulders just above the lake shore. You’ll also see that the Southeast Face steepens unpleasantly, if you move too far leftward from here (i.e., away from the large, snow-filled couloir).

Instead, continue to descend the Southeast Face until you find a right-angling, side couloir. This couloir has minimal snow in it, is somewhat steep and loose (Class 3), but feeds you down to the base of the large, snow-filled couloir. Once at the base of the side couloir (which has now joined the large couloir), scramble over large boulders and then through some thick trees and brush to reach the blessed lake shore. Talus-hop along the north shoreline of the lake to reach the outlet stream. Cross the outlet stream and navigate through boulders and trees to reach the terminus of the Bear Valley Trail. 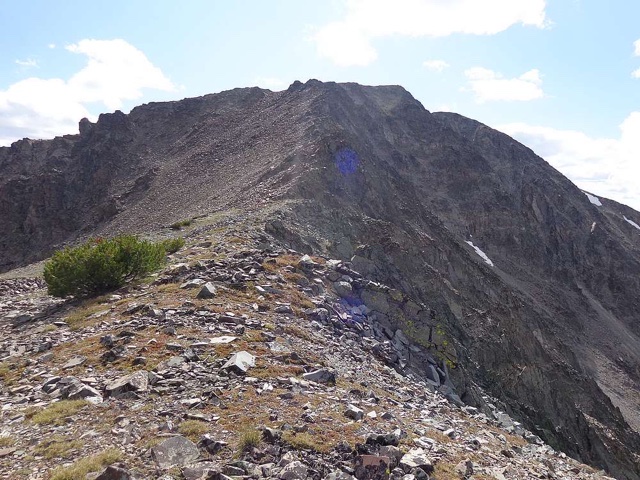