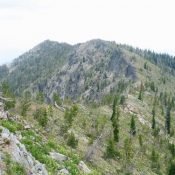 Climbing and access information for this peak is on Page 73 of the book. The best access is from the Magruder Corridor and Burnt Knob as discussed below. As a result of forest fires and little trail maintenance, the approach trail (FST-539) is in poor shape. In August 2017, the trail to the first peak on the ridge (White Top Mountain West) had deteriorated even more than discussed below.

Three Prong Mountain is the high point in a cluster of closely-packed mountains, ridge points, and glacial cirques at the north end of the peculiar ridge that runs north and south, perpendicularly crossing the main Salmon/Clearwater Divide. Most major geographic features in the Clearwater and Northern Salmon Basins run east and west. This ridge system runs over 20 miles and has several points over 8,000 feet. The system reflects the climatic transition from the northern maritime flows of the Clearwater Basin and the southern continental climate of the Salmon Basin through vegetation changes over the length of the ridge. Three Prong Mountain gets its name from three outcrops protruding from the summit ridge. USGS Three Prong Mountain 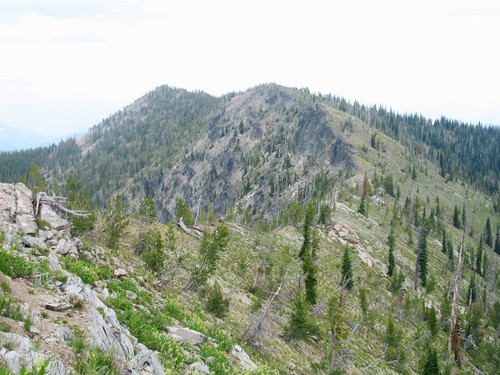 From the trailhead on Burnt Knob, Three Prong Mountain is approximately a 7-mile hike one way. The trail starts off well-maintained and easy to follow, due to all the traffic to the three Burnt Knob Lakes. The trail is easy to follow for much of the way beyond the lake basin, though the fires have removed all vegetation and turned the ground to ash. In places, there may not be much of a discernible path. About two thirds of the way in, the trail completely vanishes, but the ridge is broad and gentle and there is no question as to where to go. About halfway in, the historic Southern Nez Perce Trail route is crossed, but due to little use and recent hot-burning fire, there is no trace of it to be found on the ridge.

Once the trail is gone, just follow the ridgeline. There is some unnecessary climbing to get up over Point 7820, so avoid it by cutting across the east slope of the point and then contouring around the south aspect of the ridge below Point 8026 while gradually climbing to the broad Point 8136. From here, Three Prong Mountain is an easy, mostly-level ridgeline hike through a nice open subalpine fir/whitebark pine forest, carpeted with a heavy blanket of wildflowers. The yellow buckwheat on the rocky outcrops is especially beautiful. 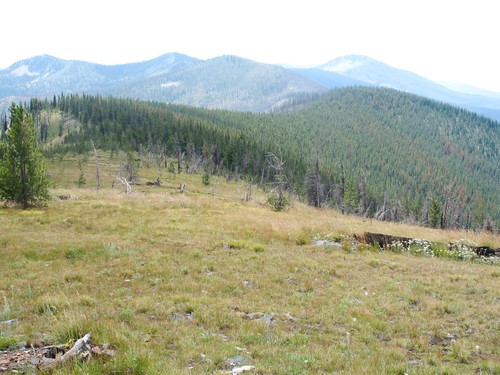 The ridge walk is generally open and easy to follow. Mike Hays Photo