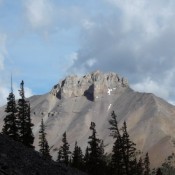 Climbing and access information for this peak (shown as Peak 11280+) is on Page 282 of the book. At the time of the second edition, I was almost positive that the peak was unclimbed. I listed it in the book to give people a shot at a first ascent but I planned on racking up the first ascent myself. Brian Wright and I finally climbed the peak in 2003. Read about the saga at this link: The First Ascent of Triple Peak Updated July 2021

Triple Peak is located on the Breitenbach/Corruption Divide, northeast of Mount Breitenbach. It is a congregation of broken towers capping off an immense and unstable talus/scree pile. As of 2018, fewer than ten people have reached its summit. USGS Leatherman Peak 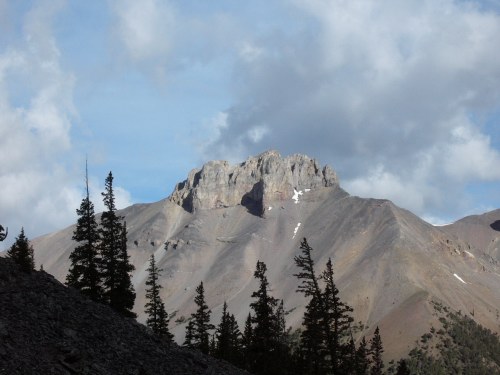 Triple Peak as viewed from upper Dry Creek. The route follows the left-side skyline until it reaches the cliffs. 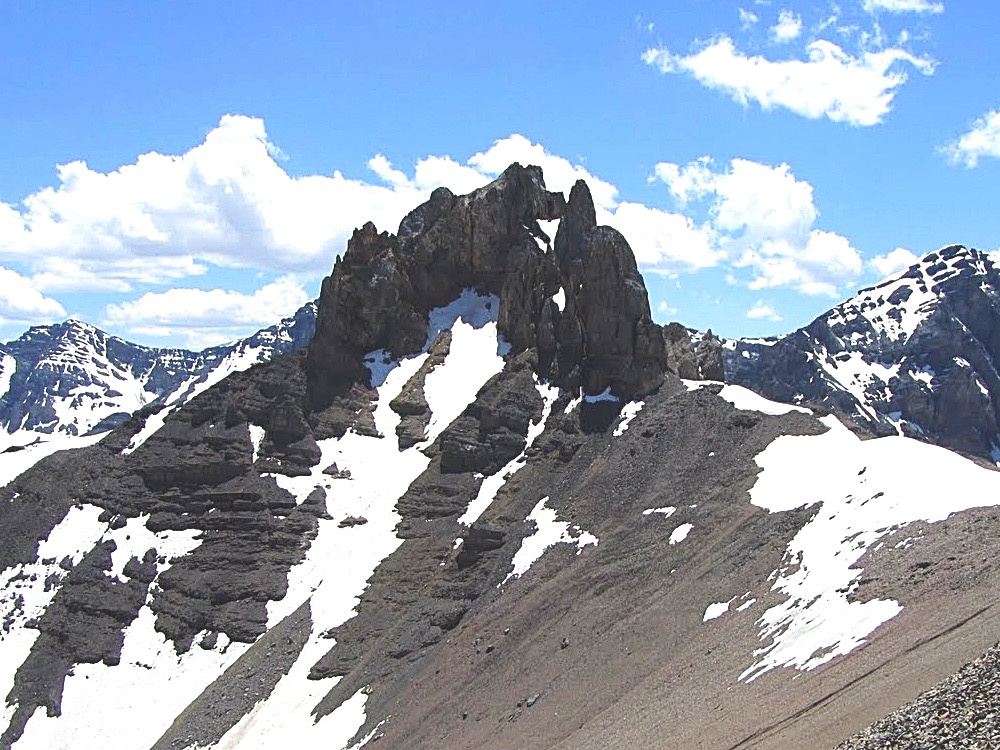 Triple Peak in all its majesty viewed as from the north. George Reinier Photo

The Key Hole Route begins on Breitenbach Pass, which can be reached from either Dry Creek [(A)(6.1) or (6.1 alt.) on Page 290] or the East Fork Pahsimeroi River [(C)(3.2)(a) on Page 294]. The trails shown on the map are seldom, if ever, maintained. Therefore, cross-country travel skills are needed to reach the pass. 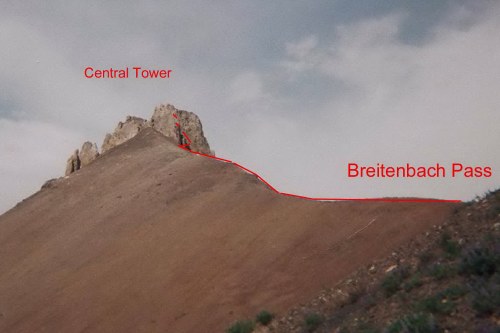 The summit of Triple Peak as viewed from the trail up the Pahsimeroi River to Breitenbach Pass.

From Breitenbach Pass, hike northeast up the ridge to the base of the first southwestern most tower. Traverse east, scrambling over boulders and talus for about 150 feet to the base of a steep, slippery, debris-filled gully. Climb the gully–carefully. The route up the gully crosses loose talus and hard ledges covered with loose rock. At the top of the gully, the route climbs a 12-foot-high Class 3-4 wall which brings you to a keyhole. 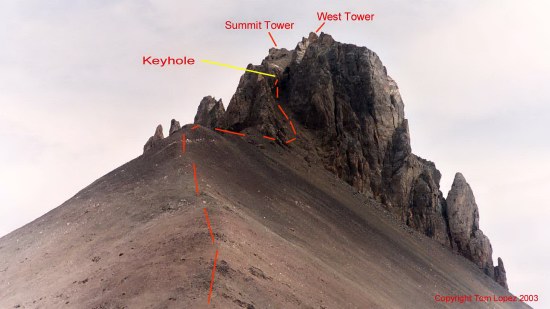 Looking at the summit towers from Breitenbach Pass.

Climb through the keyhole. Scrambled up to the north until you reach a wall shaped like an open book. This feature leads to the top of the Southwest Tower and is a short 75-foot 5.7 climb on unstable rock. Look to your left, a ledge system above a cliff leads north along the base of the Southwest Tower’s north face. To reach this ledge the route crosses a steep debris filled gully. The far side of the gully is a 25-foot-high wall of dirt and debris. In 2003 this dirt wall was treacherous, loose and exposed.  I suspect it has now been crossed enough times that it is a bit easier to climb now. 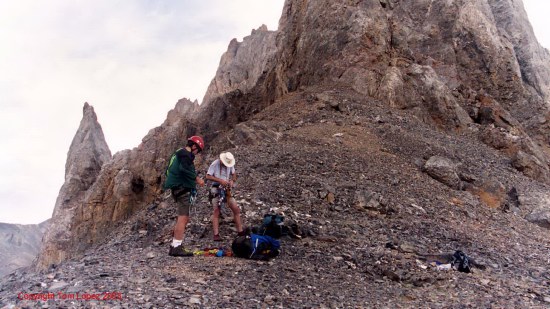 Time to harness up at the base of the West Tower.

Climb the dirt wall and once over the lip you will find the ledge. Follow the ledge across the Southwest Tower’s face to the notch and then walk to the summit. 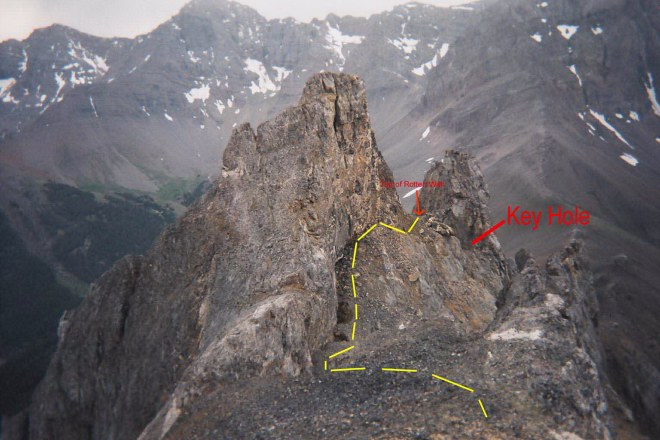 Looking from the summit down the upper route. The West Tower is roughly 25 feet lower than the summit.

As we reached the summit, the East Tower came into view. We could not say with certainty that we were on the highest point. We had to check with a level to be certain that we had the first ascent. 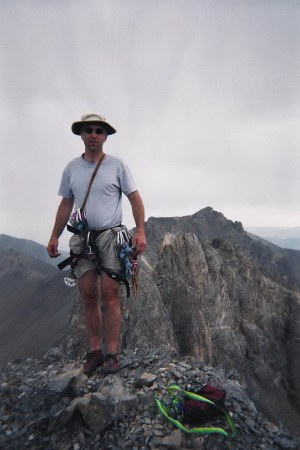 Brian on the summit with the East Tower
in the background.

Also, see Judi Steciak’s trip report of the Steciak/Hamke ascent of this route, which includes great photos of the route. 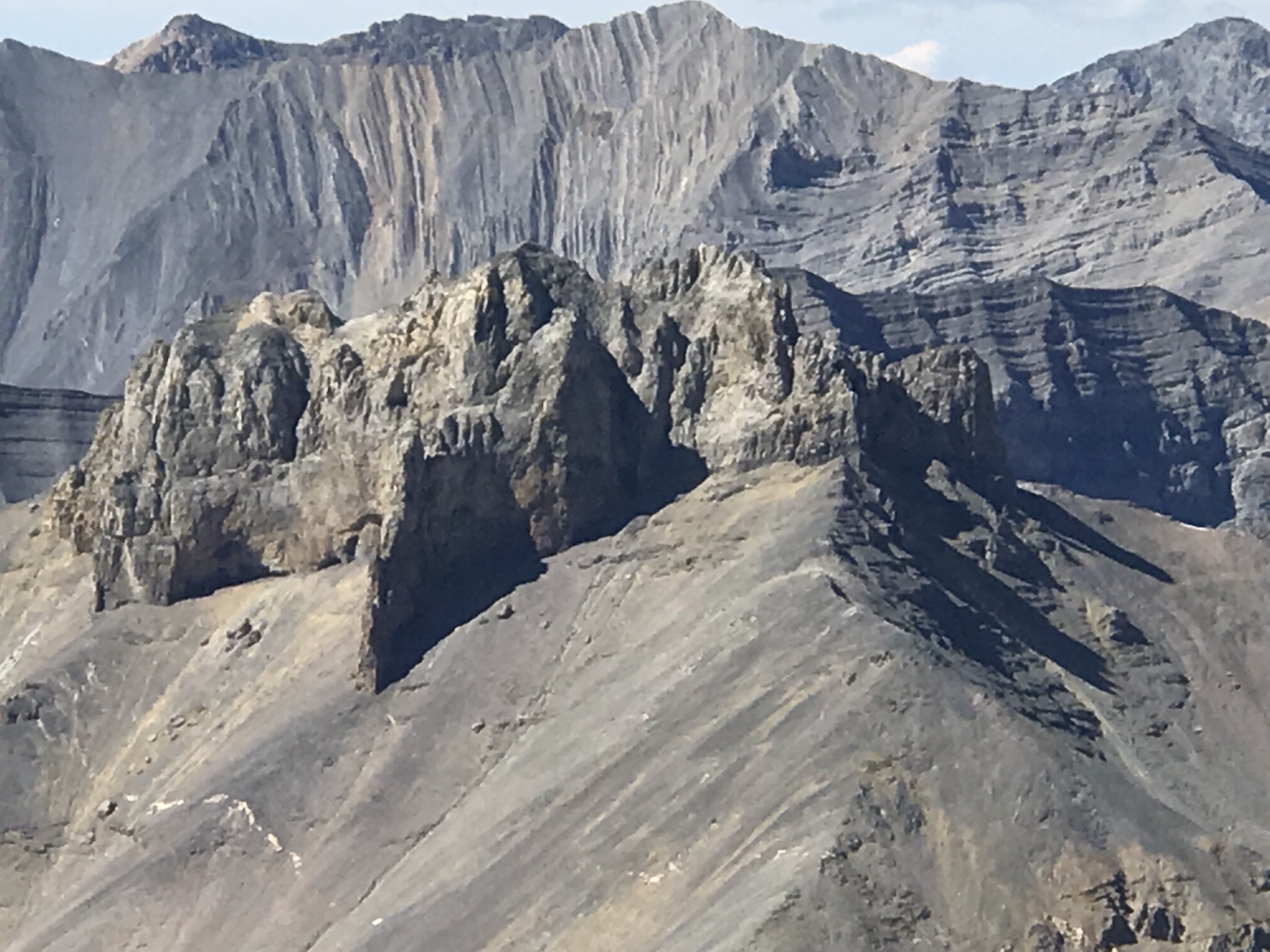 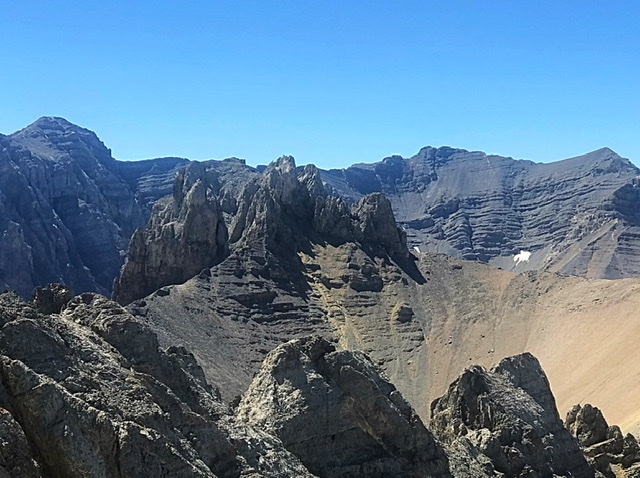 Read about the first ascent saga at this link: The First Ascent of Triple Peak 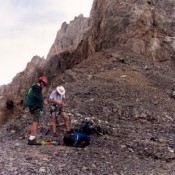 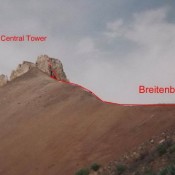 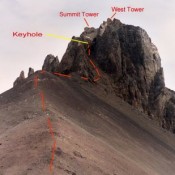 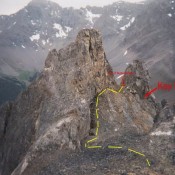 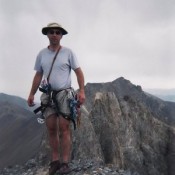